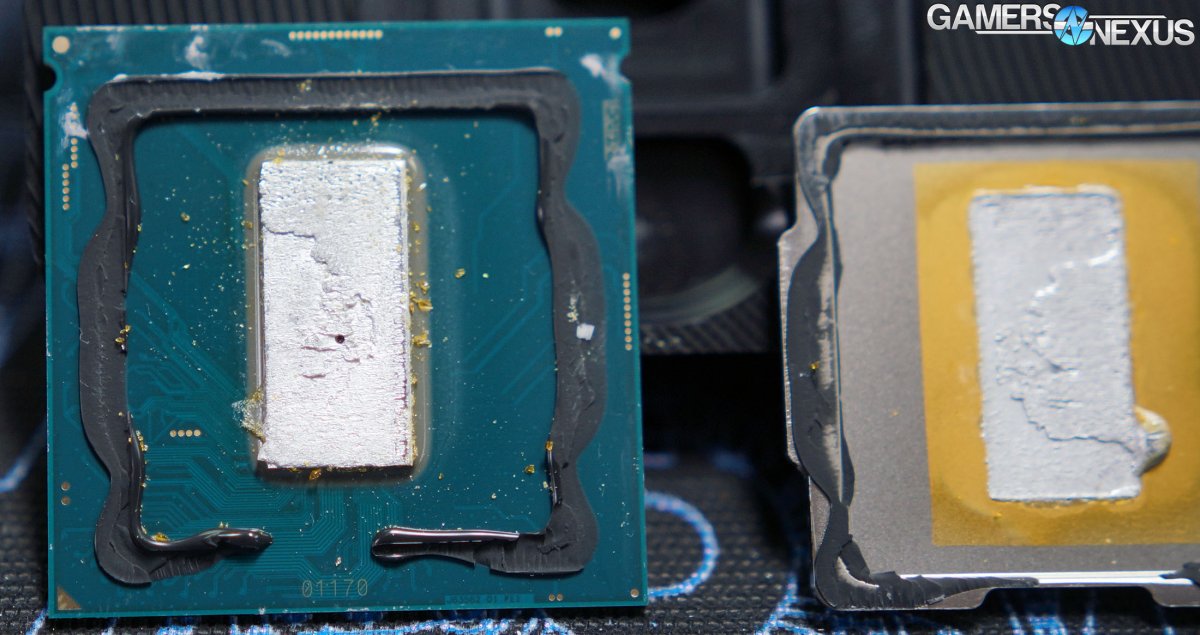 What We Did & Why: Lapping the Inside of the IHS

The task of lapping the inside of the IHS arose out of necessity. The truth of the matter is that, no matter what all of the tech reviewers – including us – will show you, it is actually a higher level of difficulty to get a delid working well on the 9900K. It’s not exceedingly difficult, but it’s more work than popping the CPU into a delidder and then applying liquid metal.

For this job, you’ll need to carefully remove all of the excess Indium solder from the die and the IHS. It is principally important that both surfaces are smooth when the delid is done. If it’s not smooth and there are chunks of Indium remaining, the CPU will almost instantly throttle when used, especially with liquid metal (like the Conductonaut we used). Liquid metal’s surface tension requires it to have an opposing surface that is also coated in liquid metal, and depth differentials could throw-off the contact and increase likelihood of air gaps between the liquid metal. This isn’t like a paste where it’ll squish-out and make-up for mistakes. Although we haven’t tried it, one could theoretically use liquid metal to help dissolve some of the Indium. We just took the more barbaric approach of a knife, but this requires patience. Slipping or getting to aggressive can very likely kill the CPU.

As for the internal lapping, that can help deal with gouges that may be leftover from the Indium removal process. We used grit 600 sandpaper, then 1200, then 2000, then wet 2000, and ended with grit 3000 sandpaper for a polished finish. We’ll talk more about this process toward the end, but let’s go over the new results. We’re not going to re-read and explain everything from the review, so if you haven’t checked that and have questions, consider watching or reading our 9900K review as well.

For testing, we’re still using the Maximus XI Hero with the CPU set to the frequencies and voltages specified in the charts. Note that the 8086K is not perfectly comparable, as its die size is different. We left it there only for perspective. For the workload, we are using Blender to render a real image, so it is a realistic AVX workload. 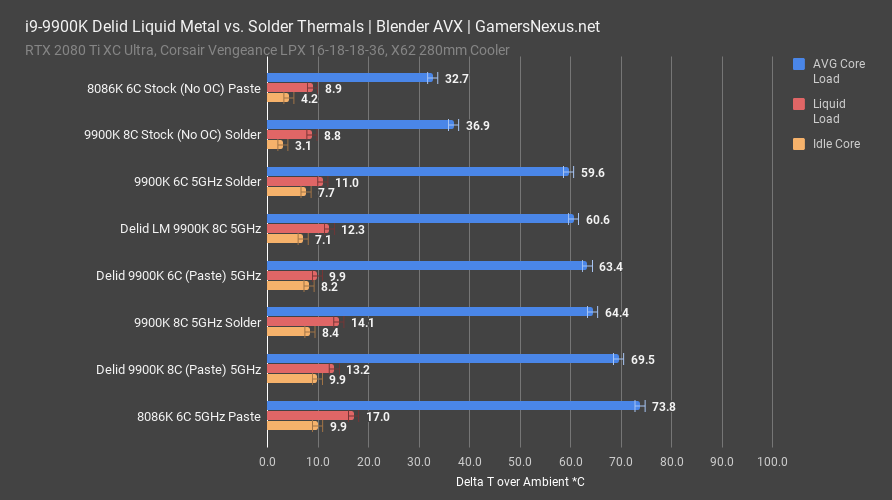 We already talked about delidding results in our review that was posted on launch day, but that was a different approach than normally. Our typical delids use liquid metal, whereas our first delid used thermal paste. This was to determine how much different Intel’s new Indium solder is versus a high-end Thermal Grizzly Kryonaut paste. We found that the differences didn’t amount to much: Intel’s solder was only 4-5 degrees better than good paste on average, leaving plenty of room to improve. The […]

After our liquid metal application, we saw a temperature reduction from about 64.4 degrees Celsius delta T over ambient to about 60 degrees over ambient. That’s an additional 4-degree drop in our Blender AVX workload. It is possible to get even bigger temperature reductions, of course, but that might be something we explore separately with die sanding. The reason we didn’t see better performance is because we have not yet sanded down the die to be smoother, and so there are some marks from removing the solder previously. That’s the point of this content, though: It’s to illustrate how much extra effort is required to really get good performance. We spoke with Der8auer separately, and he spent an entire week getting his delid dialed. Surface smoothness is now our biggest limiter to performance. As a reminder, this is on our Kraken X62 standardized test bench cooler, not on the crazy setup we had for stream. A 4-degree drop isn’t bad when considering there’s still so much more we could do, and it’s what helped contribute to our higher overclocks when on stream a few days ago.

Speaking of, let’s look at some of our overclocking results. Our original overclock was confined to 5.2GHz at about 1.35V, after accounting for vDroop, as we began running up against thermal limitations with solder and our X62 cooler. Although the extra 9 degrees will help with overclocking on the X62, we switched to a 540mm SE radiator from EK for our livestream. We also attached four of the Vardar Furious fans to it, producing enough airflow to create hairflow.

With all these things combined, we stepped our overclock up to 5.3GHz stable, or 5.4GHz with pseudo-stability. We also increased the cache ratio to 50x. We still have a lot more work to do on memory configurations, but we did see increases in Cinebench and Timespy performance alike. We’ll post some of those numbers on screen now. 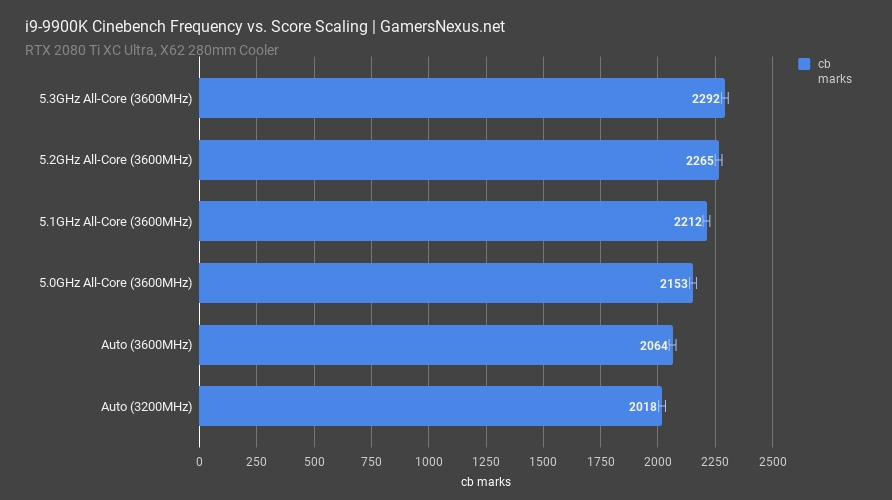 For Cinebench, as reference, just changing memory increased the score from about 2018 to about 2064 multi-threaded. The point of showing this is just to show the performance difference from a memory change, as we used a slightly different build for the livestream. Here’s our scaling chart with the memory: We measured 2153 cb marks when at 5.0GHz all-core, a climb of 4.3% over the 2064 score. Going to 5.2GHz all-core pushed us to 2265 cb marks, or another 5% climb over the previous score, and a climb of 9.7% over the baseline 2064 marks. At 5.3GHz, we measured 2292 cb marks. We’re now hitting diminishing returns, with about a 1.1% improvement for the extra 100MHz all-core. Cinebench did not finish at 5.4GHz with our setup, but Timespy physics testing did complete. 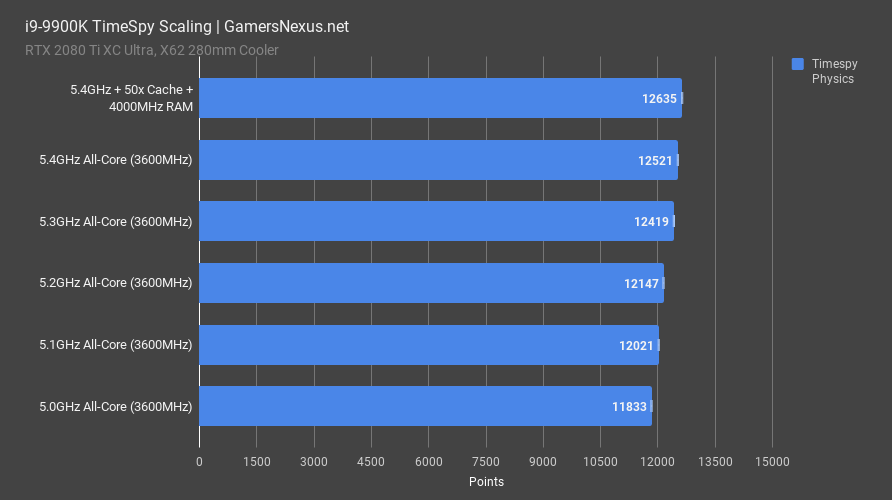 Back to Reality: Is It Worth Delidding the 9900K?

Let’s bring it back to reality. Delidding has never been a hard requirement with Intel’s processors. It becomes a requirement for serious overclocking, and it absolutely helps drive down the thermals in a way that can benefit system noise levels. With the soldered CPU, it’s still not a requirement, and the solder is better than the original Dow Corning TIM that Intel has used. Intel soldered this one out of necessity. The company could not have achieved the clocks it did – not across eight cores – without increased cooling efficiency.

Even still, it’s clearly possible to improve performance. You could also go direct die, if you really wanted to, but we’ve got to draw the line somewhere. As for whether it’s worth it, the answer is generally “no,” and more so than previous CPUs. With this one, it’s a lot of extra steps and the risk is higher for the untrained. Gains require more attempts to really get it right, more trial-and-error testing, and it’s possible that you don’t end up much better than before. If you start grinding down the die and lapping the IHS, it’s more likely you see worthwhile improvements. This isn’t like the 7980XE where we saw instant 20-degree improvements from a delid and liquid metal. It’s more tempered.

We’d only recommend delidding to people who are pushing for high clocks, competitively overclocking, or who are so neurotic about noise that an extra couple degrees and 200RPM reduction in fan speed might be meaningful.