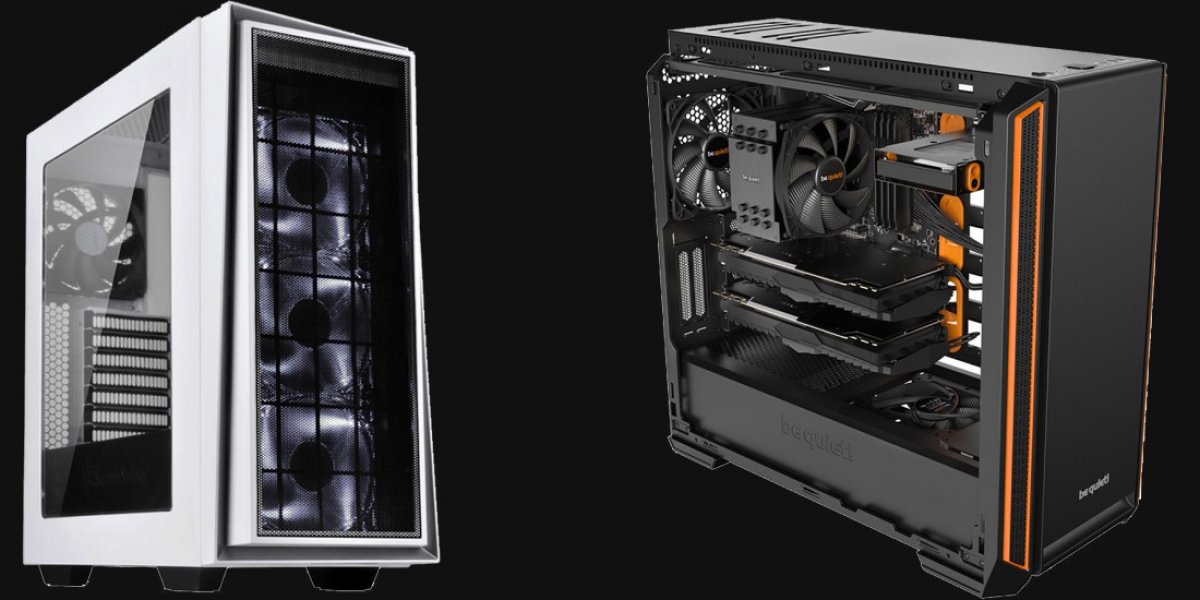 In its original review, we measured the RL06 at 43dBA with the fans running at 100%. It has three 120mm front intake fans behind a mesh panel and a filter and one slower (and therefore quieter) rear exhaust fan. Meanwhile, the SB601 maxed-out at 36dBA, or 32.8dBA with the integrated fan controller turned down to the minimum speed. It comes with two Pure Wings 2 140mm fans, one configured as front intake behind a steel panel and foam layer, and one as rear exhaust.

Testing was a bit different from what we normally do. The entire process followed the normal review process (pasted methodology below, just in case you need it), but the change is that we were focusing on normalized noise for this one.

Original tests from the review: 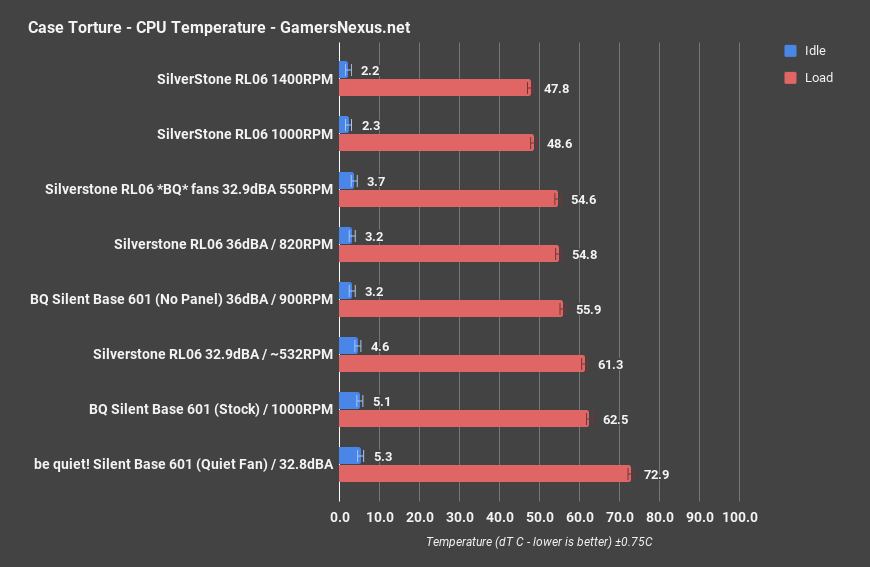 The first objective of testing was to normalize for noise, so we matched the RL06 and SB601 noise levels at 20” to equate one another. This was done by decreasing case fan speeds to 58% on the SilverStone RL06, bringing it down to 36.1dBA. The Silent Base 601 also sits around 36dBA when at 100% fan speeds. CPU temperatures were the RL06’s strongest aspect in the original review, and they remained so even with reduced airflow: The RL06’s baseline performance at maximum speed is about 48 degrees Celsius over ambient, which remains one of the best results on our later-shown comparative chart. Choking the speeds to meet a 32.9dBA noise level resulted in 61 degrees over ambient as the CPU torture temperature, significantly outperforming the 73-degree result of the be quiet! Silent Base 601’s equivalent 32.8dBA noise level. There’s no contest here, but this still isn’t a perfectly fair comparison: The 601 is using significantly better fans, primarily in that they’re capable of lower noise levels at higher CFM. This is something for which be quiet! gets credit, but to even it out, we transplanted those fans into the RL06. With the 601’s fans in the RL06 and a 32.9dBA noise level, the same as the Silent Base 601 on its silent setting, the RL06 ended up at 55 degrees over ambient. This is a massive lead over the equivalent 73-degree result, and illustrates just how much fans matter. These are the same fans the SB601 used, but in a more open case and spun-down to a lower RPM for equivalent noise. The RL06 has the same perceived volume, but the cooling difference is one of being usable versus unusable for non-idle workloads.

Matching the two cases instead to 36dBA, the SilverStone RL06 ends up at 55 degrees over ambient, with the Silent Base 601 at about 63 degrees. In this instance, the be quiet! front panel is more readily overcome by the extra pressure of its intake fans, and so it fares better than at the quiet speed setting. There is a non-linear loss in performance as pressure is reduced against that panel.

Here’s the interesting part: If be quiet! had a more open front panel, but instead reduced fan RPM to match its original noise level of 36dBA, the performance climbs to 56 degrees over ambient. That’s rough equivalence with the RL06 when using the stock SilverStone fans, and illustrates the point that silence can be had with an airflow-oriented case while achieving equivalent performance. 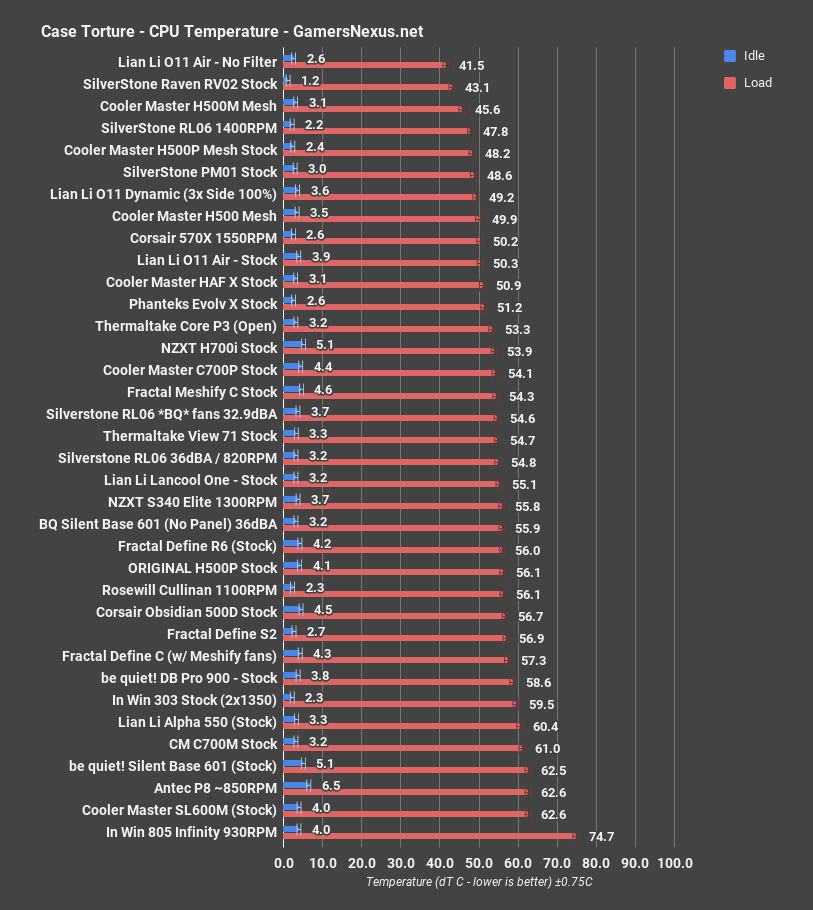 Just for reference, here’s a comparative chart with a lot of other cases on it. At 36dBA, the RL06 with stock fans at 58% speed ends up around the Define R6 and H500P Original case. Not great positioning, but it’s at nearly half fan speed. Not bad when given the quieter focus, and certainly better than the 601’s near-bottom result. 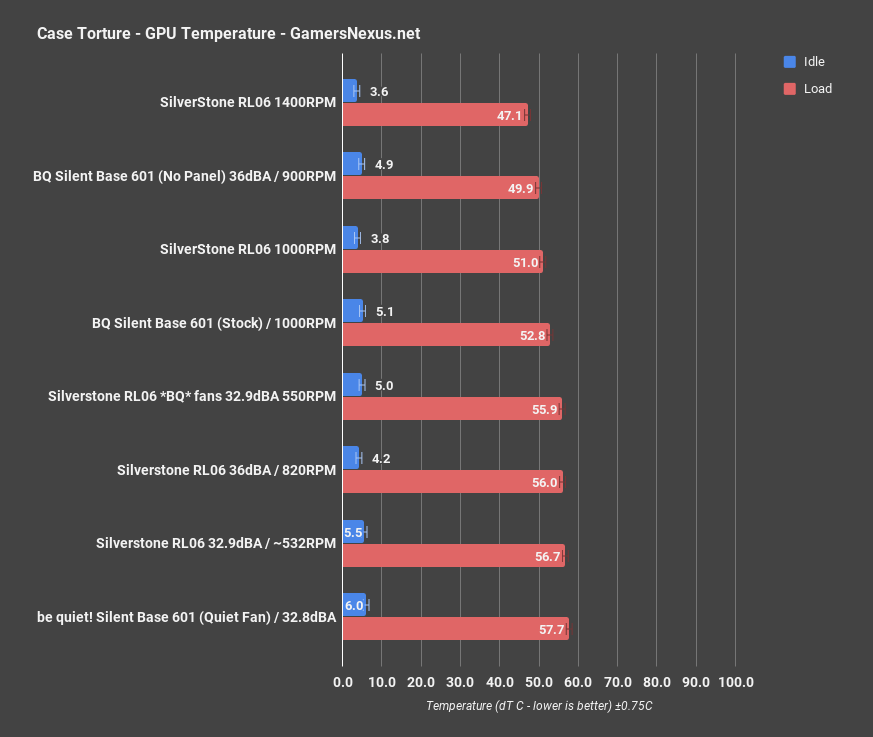 For GPU thermals, the RL06 at 1400RPM establishes a clear baseline for maximum possible performance between these two cases. This one is at 47 degrees over ambient, followed most closely by the Silent Base 601 without a front panel. This is a switch-up from the CPU charts, where the RL06 dominated in all performance classes. The SB601 does better here as it has greater breathing room between the GPU and case paneling, and also has its only stock intake fan pointed straight at the video card. Following this 50-degree result is the SB 601 at its maximum speed. Putting the be quiet! fans into the RL06 and setting them to 32.9dBA improves temperature to equate the stock RL06 fans at 36dBA, again highlighting the advantage of a good fan. We’re at the same performance level but audibly lower noise levels. Humans tend to notice noise differences of approximately 3dBA or greater. That’s not to mention that the cheaper cost of something like the RL06 would allow for more budget to buy good fans. The difference between the two quietest stock fan results is marginal, with the Silent Base and RL06 roughly equal at the low-end. 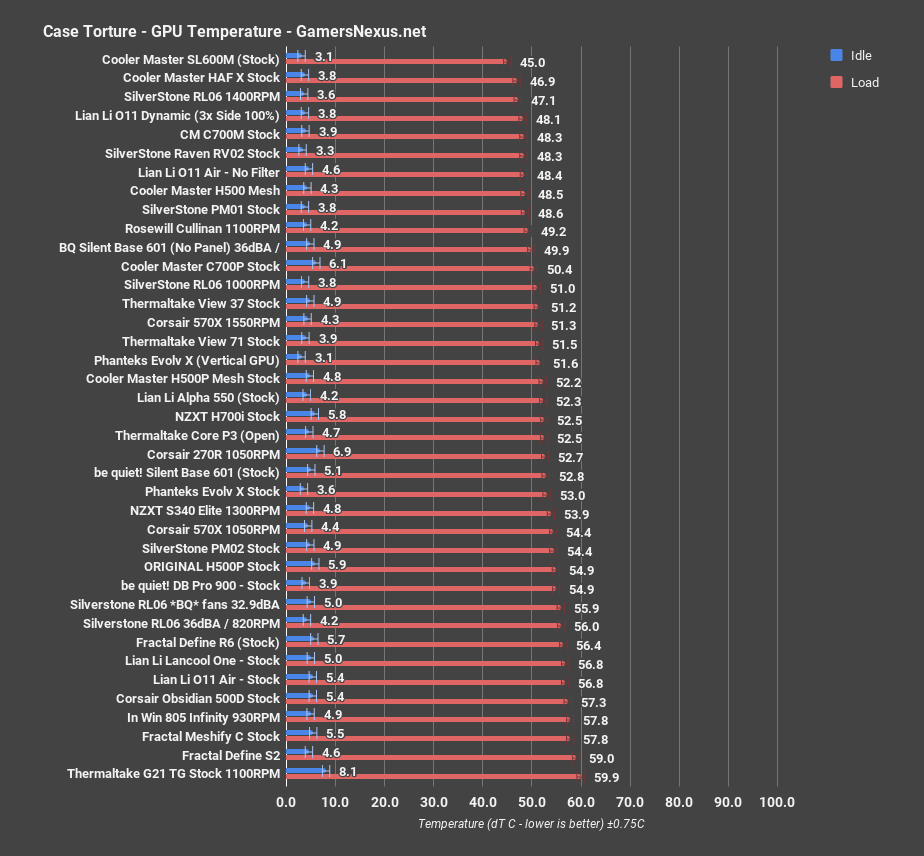 For perspective, here’s a comparative chart. We’ll highlight the RL06 and Silent Base 601 results. The RL06 descends the chart rapidly as fan RPM is reduced, as airflow dynamics in the case tend to favor the CPU. This is further reinforced by the proximity of case paneling to the video card.

Conclusion: Mesh Can Be Better, But…

We’ve demonstrated our hypothesis as accurate for this specific scenario, but there are a lot of things to keep in mind. First of all, silent cases still play an important role in the case market. Not everyone wants to tune fans, so that’s a major bonus, and they also may deal better with dust in many instances. Silent-focused cases can also eliminate certain types of annoying noises, something we didn’t test here. You’d need a particularly whiny system to really notice, granted. They’re also more advantaged in battles of absolute silence, whereas we were going for “operable silence.” If you want complete, total silence, you can really only get so low with a mesh case. At some point, it’s going to be limited, and the closed paneling will benefit companies like Fractal and be quiet! in those instances; that said, these cases are also limited insofar as their ability to still operate at reasonable temperatures while being so quiet. For idle or low-load operation, like in an HTPC that mostly plays YouTube videos, it makes sense. For gaming or workstation loads, too much silence will yield poor thermal results.

As for the rest, it’s clear from our testing that the right mesh case can be optimized to equivalent noise levels (“volume”) as at least some quiet cases, but with superior thermal performance and airflow. We prefer this approach for high-end enthusiast builds, but we fully appreciate why it is not the best for all use cases (see above). Our testing also demonstrated the superiority of high-end case fans, like the stock fans that be quiet! used in its Silent Base 601. Transplanting those into the RL06 posted tremendous value for both noise level and airflow.