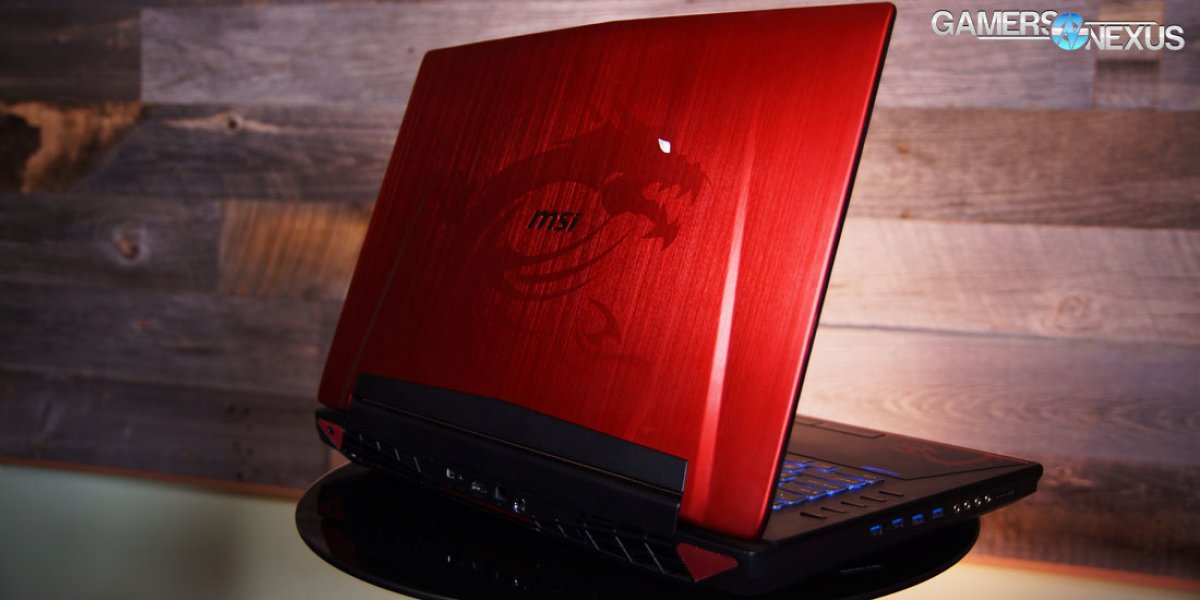 The main “loss” against the desktop GTX 980 is clock speed. There's a slight down-clock of the GT72's GTX 980, which ships at ~1064MHz base. The GTX 980 reference card – something no one buys at this point – sits at 1126MHz, and that number only climbs as we factor-in same-cost AIB alternatives. The clock-rate reduction is in favor of thermals, already bordering against the desktop GPU's heat generation. We'll look at that later.

Compared to the GTX 980M, the GTX 980 has a significantly faster (+40%) memory clock, at 7Gbps vs. 5Gbps effective speed, 512 more CUDA Cores (2048 vs. 1536), and more overclocking headroom. It's also going to be a bit warmer, with all that packed into the same notebook enclosures, but nVidia has amped-up its vendor hardware recommendations to accompany the 980's needs.

One such shift is toward more powerful VRMs, with all GTX 980-equipped notebooks utilizing between 4- and 8-phase GPU VRMs. For perspective, most notebook GPUs host 3-phase power designs, which is fine for anything that doesn't make overclocking a focus – but the 980 thrives on more.

Another nVidia-to-OEM recommendation is that vendors include unlocked CPUs in their laptops, ensuring (1) a better overall fit for the GPU OC enthusiasts and (2) reduced possibility of GPU bottlenecking.

At $3100, the GT72 Dominator Pro G isn't cheap. That's about the cost of two 980-equipped desktops, but the price becomes more clear as we factor-in G-Sync inclusion, the 75Hz, high-quality display, and the i7 + 980 high-end silicon. These features – and the price – make the GT72 Dominator Pro G an option for video editors on the go and desperate gamers who travel. For comparison, the existing GT72 980M notebooks can be had around $2100 (without some features), for anyone who wants to look at what $1000 less gets you. 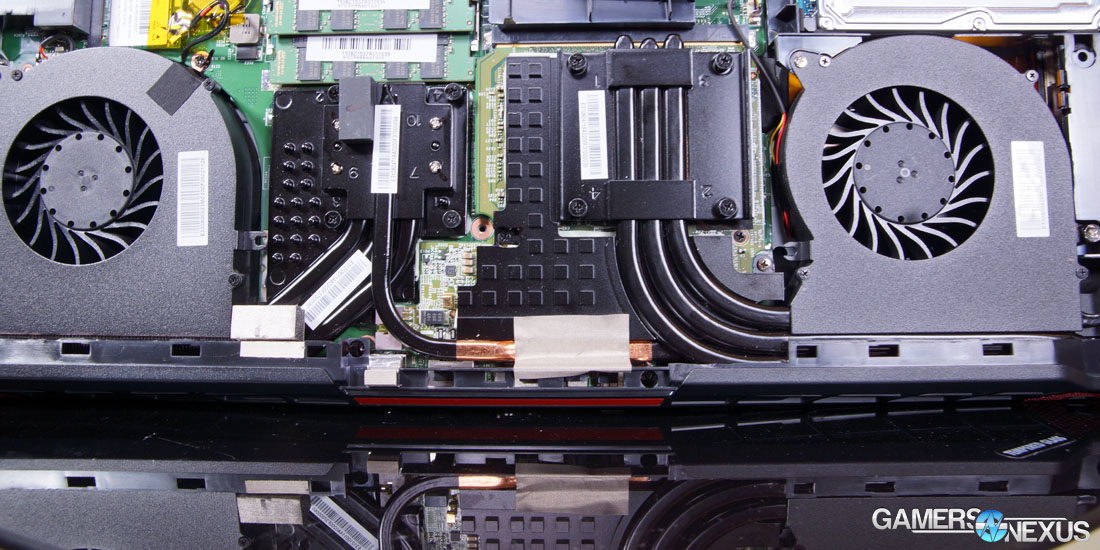 Thermal design is arguably more important for notebooks than for single video cards. A fault in a notebook will compromise the entire system, with entropy building as close-proximity components irradiate one another with heat.

As we stated with the old GT72 – the GTX 980M model – MSI's GT72 Dominator Pro G is incredibly easy to access, with nearly all the core components immediately presented under the back panel. Anyone who's ever opened a notebook knows how rare this is. Rather than burying the CPU and GPU under multiple layers of screws (and the keyboard), the GT72 bares all under a single panel. A few screws gone and we'd be ready to replace the thermalpaste, if ever necessary, and that's a huge positive for any high-end notebook with a long lifespan. 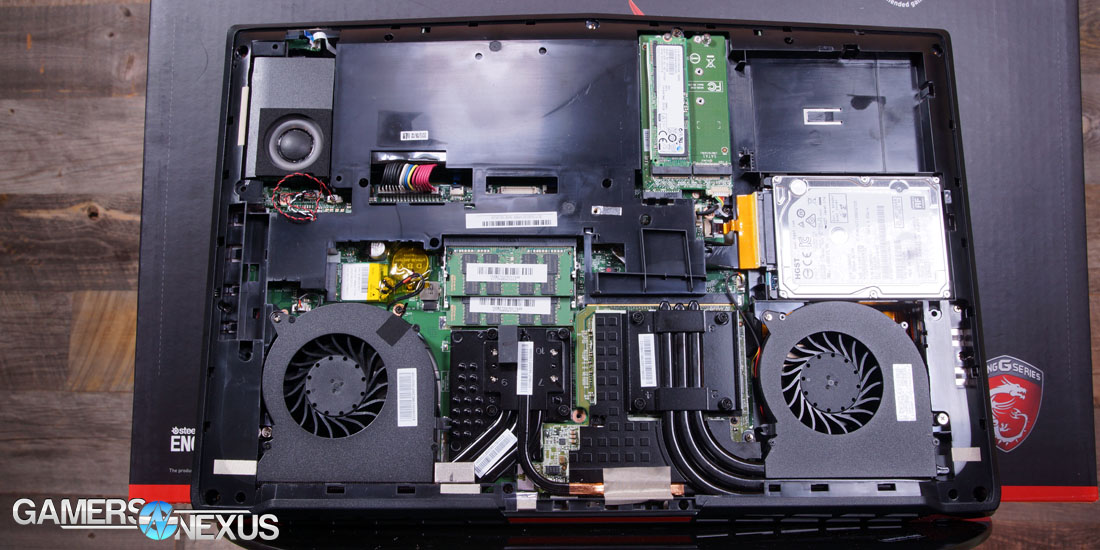 The thermal design is pretty simple with the GT72: The CPU and GPU each have separate aluminum coldplates that run to fans in opposing corners. The coldplates are bridged to fans with three copper heatpipes (coated with black paint). These run to a finned aluminum heatsink in the rear of the notebook, similar to what's found in VRM coolers for GPUs. The fans dissipate heat from the fins and send it out the back. A single, copper heatpipe bridges the CPU and GPU coldplates to another, separate coldplate, utilizing more of the real estate available for efficient cooling.

The key takeaway here is the ease-of-access granted by the GT72, making for the most effortlessly maintained notebook I've ever worked with. 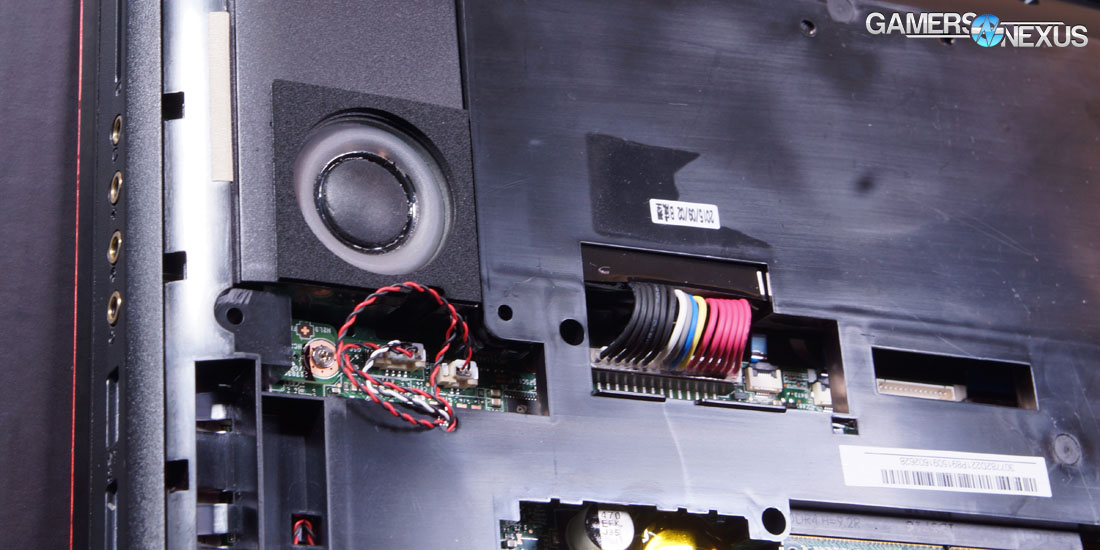 The GT72 Dominator Pro G's audio output is nothing short of superb. I've had a mixed experience with laptops – some have speakers which are uselessly quiet, some are crackly from interference / impedance, and nearly all non-enthusiast laptops lack bass. The nature of this final issue, of course, is the acoustic limitations imposed by a smaller body. There's nowhere for the sound to generate rolling booms in a slim form factor.

The GT72's large chassis makes it a natural chamber for resonating booms, amplified by a sub-woofer on the underside of the unit. The rest of the output is channeled through the four top-mounted speakers. We don't do dBA testing at this site in an official capacity, but it's loud – there's no question that the speakers are sufficiently loud for users not utilizing some plug-in system.

MSI's display runs a 75Hz refresh rate, faster than most, and is G-Sync equipped. G-Sync, as ever, offers fluid framerates by slaving the display to the GPU, rather than the other way around. Learn more about that here. 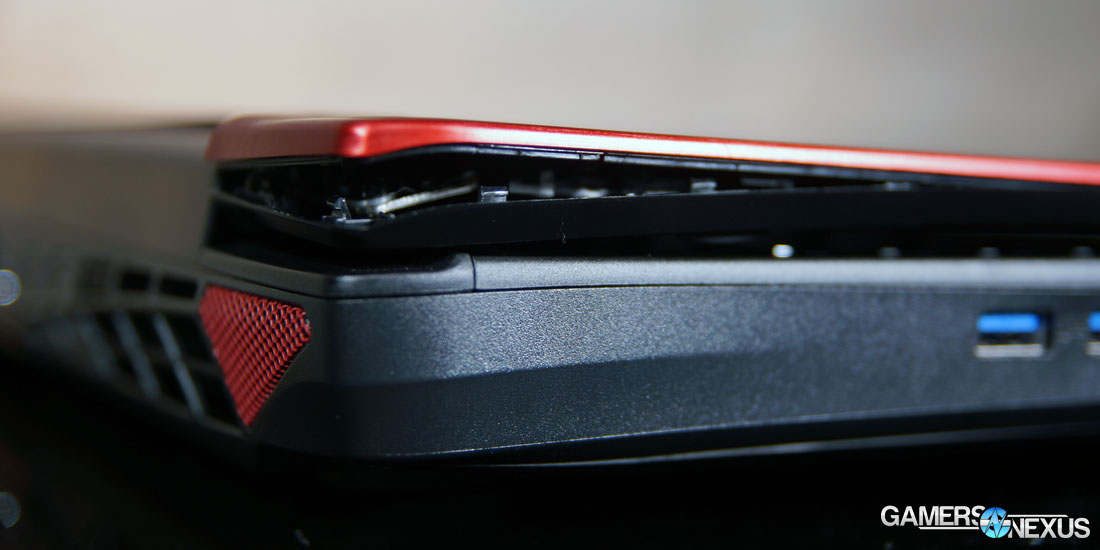 We've encountered one somewhat major issue with our GT72 unit, but suspect (and have been informed that it is likely) that this is shipping damage. The display enclosure peels away at the hinge (bottom left) when opening and closing the lid. It's popped back together easily enough, but would crack the plastic housing after enough repetitions. MSI assures us that they have never witnessed this in-house. It is our thought that this is either shipping damage or a rare occurrence of a factory defect.