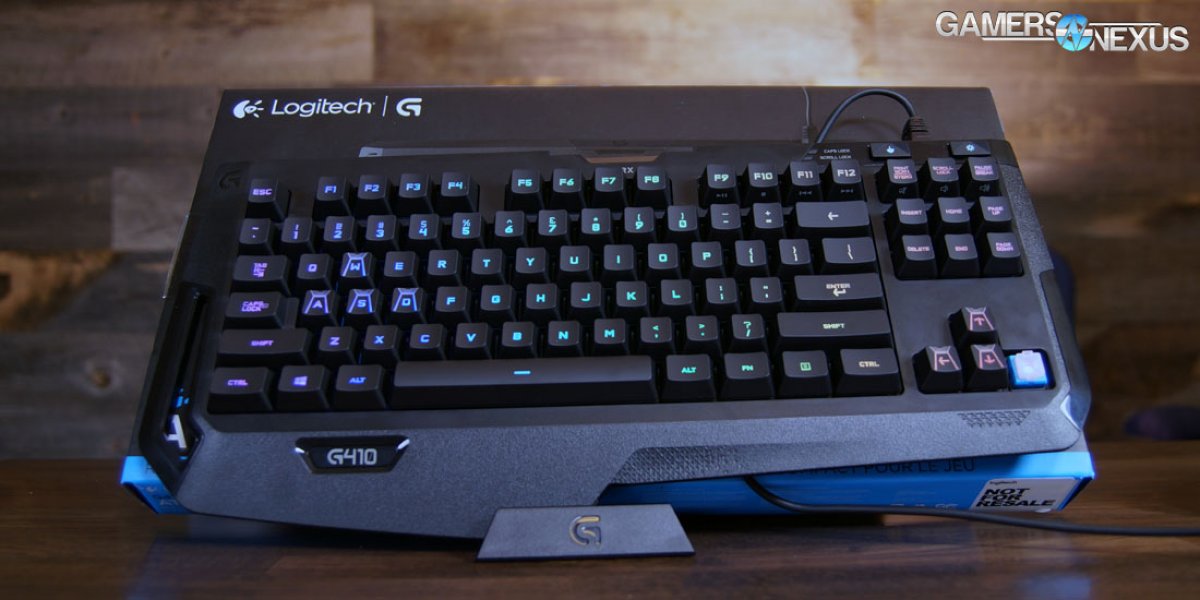 For years now, Cherry MX switches have been the norm in mechanical keyboards, but recently Cherry’s dominance has been threatened. Cherry’s patent expired, and now companies like Kaihua and Gateron are making clones of Cherry MX switches and altering the design to add features like RGB lighting. Other switches also exist, like the Romer-G switch that Logitech developed with Omron for Logitech’s G910 and G410 Atlas Spectrum keyboards. The Romer-G switches are designed with significant differences from the usual Cherry, Kailh, and other plus-stem clone switches, something we previously talked about a few times.

The latter keyboard is our review topic today. Logitech’s G410 Atlas Spectrum ($130) is a unique keyboard with RGB lighting, a tenkeyless design, and Romer-G switches. Romer-G switches are currently only available on the G410 and its larger brother, the G910 ($140).

Unlike on the G910, Logitech opted to use concave shaped keycaps on the G410, often called “OEM profile,”  which are common. The Logitech G410 does well, mechanically, for extended periods of typing -- like writing articles -- as a keyboard should. The standard keycaps and tactile Romer-G switches make typing fairly comfortable on the fingers.

The design of the keyboard can make hand and wrist placement uncomfortable at times, with a small wrist rest on the left side and nothing on the right; my wrists become strained when typing for long sessions, mostly due to the forced, awkward placement of them. A wrist-rest is a solid feature, but a non-removeable and strangely shaped one like this can feel like somewhat of a nuisance. This is, of course, a mostly subjective complaint -- GN’s Steve did not have the same issue when working with the G910, which hosts a similarly-designed wrist rest. 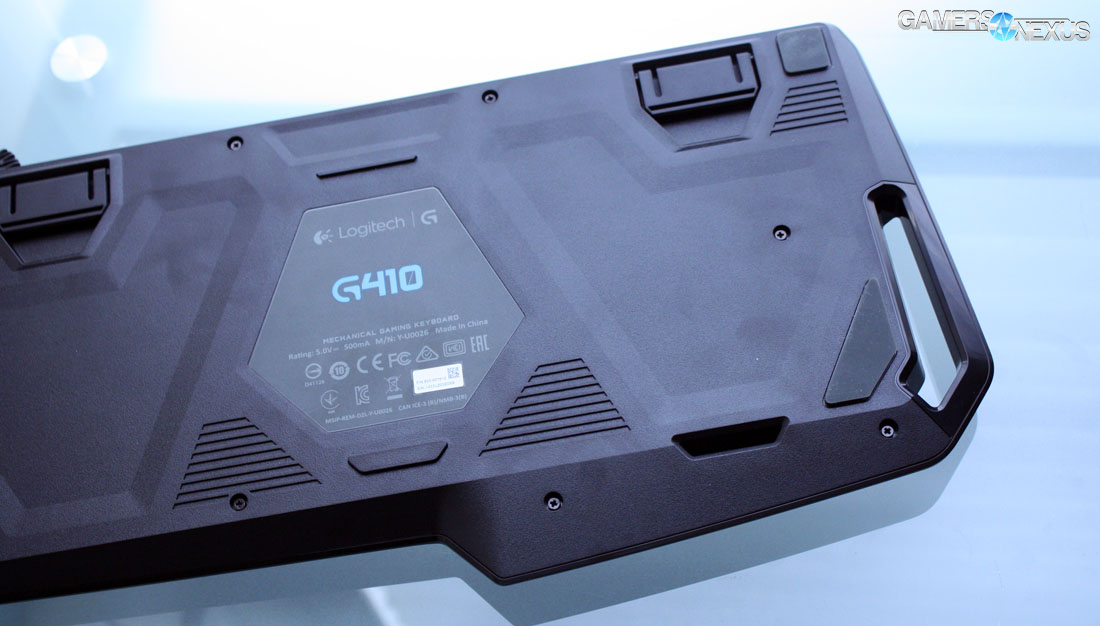 The strangely shaped wrist-rest may be uncomfortable for typing, but it actually is fairly comfortable and supportive when gaming depending on how one positions their wrist and hand.

Looking at the ‘feature’ keys, the function-based media keys, are well positioned – something often overlooked. The positioning of the media keys allows for a single hand to be used for holding down the function key and pressing the media keys.

The use of Romer-G switches is one of the unique features of the Logitech G410. The switches feel similar to Cherry MX Brown or Kailh Brown switches in that there is a distinct, tactile bump at actuation. A durability rating of 70 million actuations also sets the Romer-G switches apart, at ~20 million more than Cherry, as does its actuation force of 45g and short actuation distance of 1.5mm. Due to its relatively low actuation force, tactility, high durability, and high actuation point, Logitech claims the Romer-G can provide players an edge while gaming. 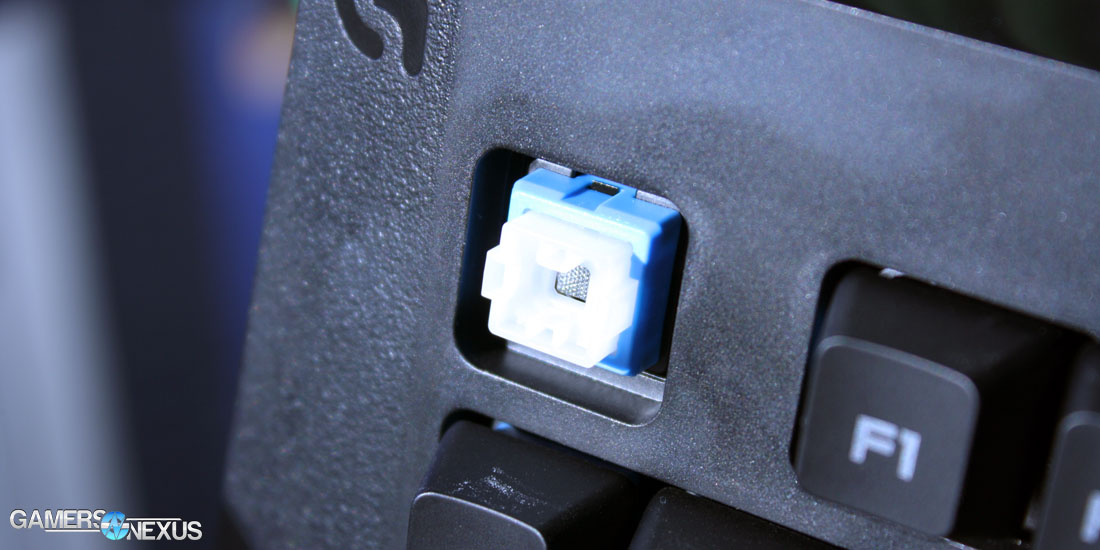 Ther Romer-G switches on the Logitech G410 had no issues or noticeable inconsistencies. Overall, we’re impressed with the Romer-G switches. They feel different than Cherry MX switches and are very consistent. The higher action point is noticeable when typing and gaming, and the design of the stem helps to cushion bottoming-out the keys. Logitech’s light pipe in the center of the stem also assists in distribution of the SMD LEDs to illuminate the legend and area around the switch, something which Cherry’s RGB switches don’t do as evenly due to LED occlusion by the stem.

The G410 isn’t compatible with Cherry MX, Alps, buckling springs, or any other common keycaps due to the Romer-G design. Finding replacement/custom keycaps is nearly impossible, and unless Romer-G switches start to become much more common, we wouldn’t expect that to change anytime soon. Despite this, the design of the keycaps and switches has the advantage of helping to reduce wobble that can be present in Cherry MX keycaps and allows better light distribution.

The G410 boasts support for 16.8 million colors, but it doesn’t have the same amount of customization as some keyboards – like the Corsair Strafe RGB has. The G410 supports static per-key and zone lighting, along with effects like breathing, color cycle, star, color wave, and reactive/key lighting. All of these are without issue except for the star effect – which slowly increases and fades the LEDs on random keys – and key press lighting to a lesser extent. These lighting modes, especially the star effect, have noticeable stepping in brightness and aren’t nearly as smooth as the other effects. That being said, this isn’t obvious unless specifically looking for it, so it is a minor issue in actual use. 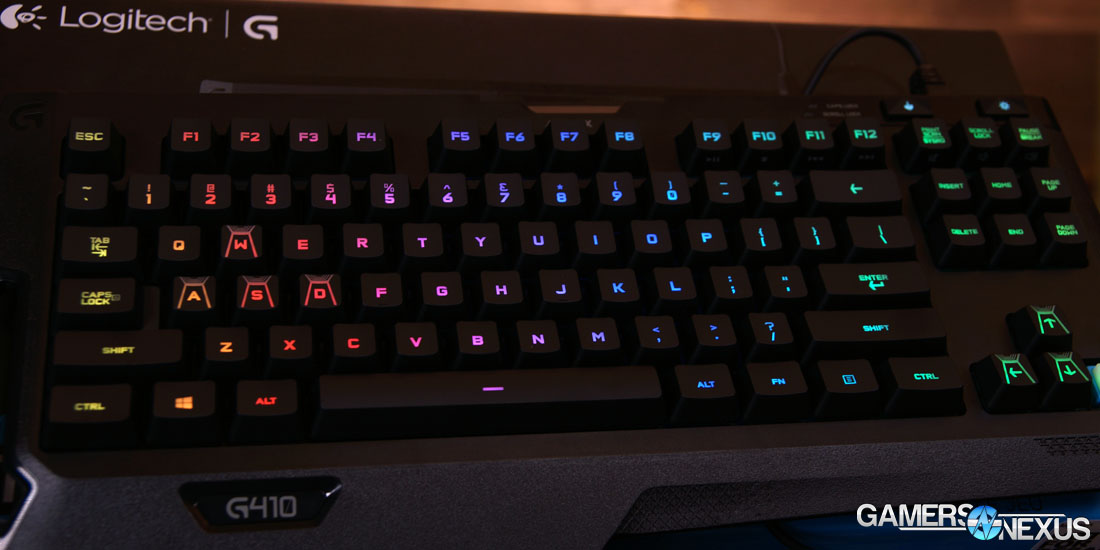 I also noticed that the white is slightly teal-tinted, but the other colors don’t look off-tint. The lighting on the G410 is overall bright, vivid, and fairly customizable.

The lighting and other features are all controlled via Logitech Gaming Software. As said above, the lighting effects include star, breathing, color cycle, color wave, and reactive/key lighting. There is also per-key lighting and zone lighting, both of which are static. Logitech also works with developers to enable per-game customizable lighting; for example, when police chase the player in GTA V, the top of the keyboard will flash the red-and-blues.

Profiles can be used to enable different lighting, depending on which games are played. Like many keyboards, the G410 has a “game mode” that disables the Windows key along with any other keys set to be disabled through Logitech Gaming Software. 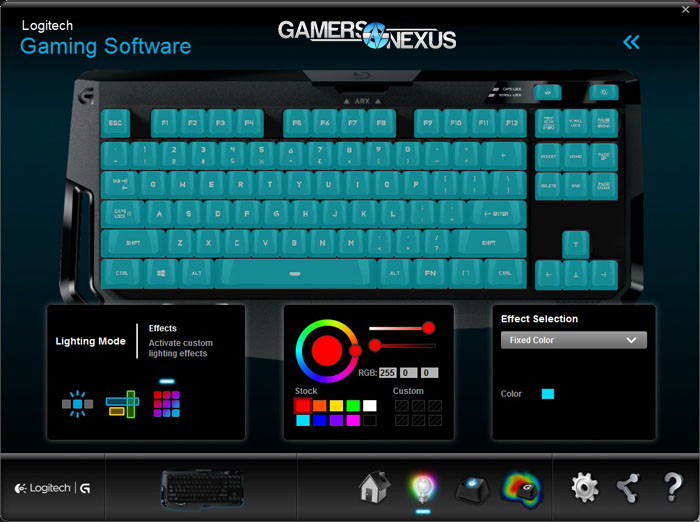 Logitech also has their Arx Control mobile app that, meant for usage with phones docked in the Arx dock. The Arx dock is a removeable phone dock that’s part of the keyboard, but unlike the G910, is detached for relocation. The stand is a plain piece of molded plastic that holds phones well.

The mobile app on the other hand, I’ve had much more trouble with. The Arx Control app (available on iOS and Android) is meant to show game information, PC stats, and media controls. The media control works well, although it has a slight latency. “PC stats” shows CPU load, temperature, and RAM usage. The PC stats tab is somewhat interesting, but unfortunately, it doesn’t consistently work and oftentimes loads perpetually.

The games tab is what I’ve been most disappointed with. It appears that none of the games I play (which include Dirty Bomb, Fallout 4, Besiege, FTL: Faster Than Light, Borderlands 2, and, on the rare occasion, Dota 2), are supported since none show up under the games listing in the Arx Control app. It isn’t Logitech’s fault that the games I play aren’t supported, but the game support – or lack thereof – in my experience is still a disappointment that renders a major part of the Arx Control app useless. 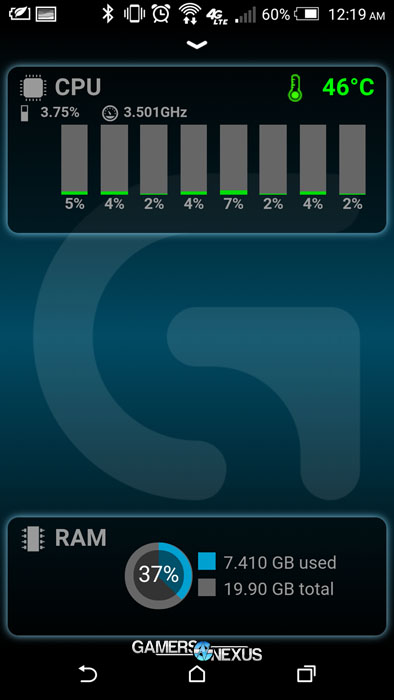 Part of what allows the G410 to be lighter than most other keyboards is its lack of a metal backplate. Logitech has emphasized to us that they designed the G410 to be sturdy despite the lack of metal backplate. The company has done fairly well in this effort, since the G410 is moderately sturdy while still feeling light; there’s only a small amount of flex when smashing keys heavily. The flip side is that, true to Logitech’s marketing, the G410 is light at 1.8lbs. The outside of the keyboard is completely plastic. Disappointingly, the cable is thin rubber and not detachable.

On the inside, the build quality is as sound as the outside. Soldering is neat and there are no significant issues. There is some solder flux on the PCB, but that’s about as nit-picky as you could possibly be and isn’t an actual problem. 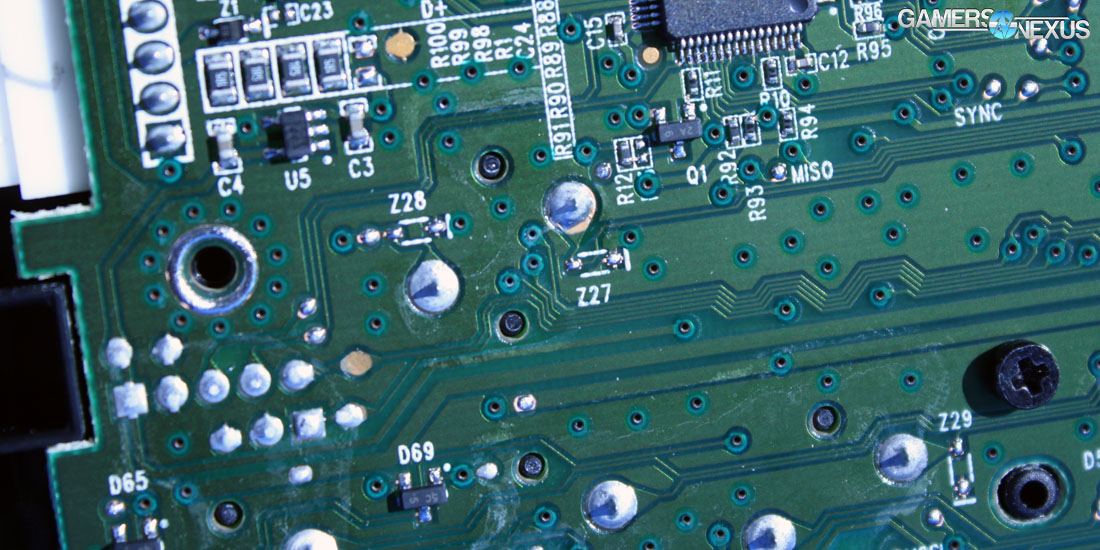 The G410 uses an ST Microelectronics STM32L100 32-bit ARM processor as the controller, along with three lighting controllers labeled “210-0001610 V002” with Logitech branding. 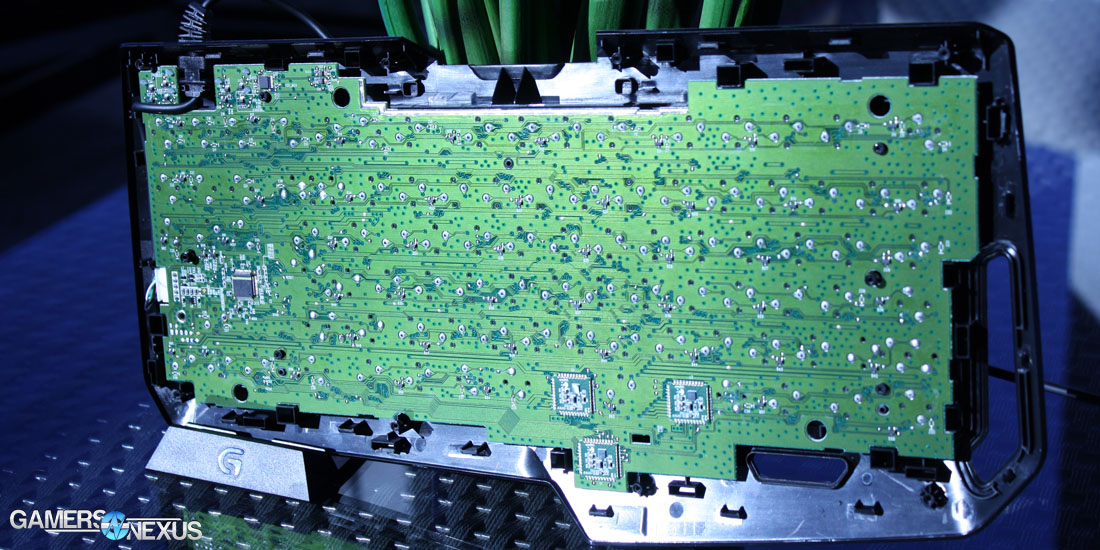 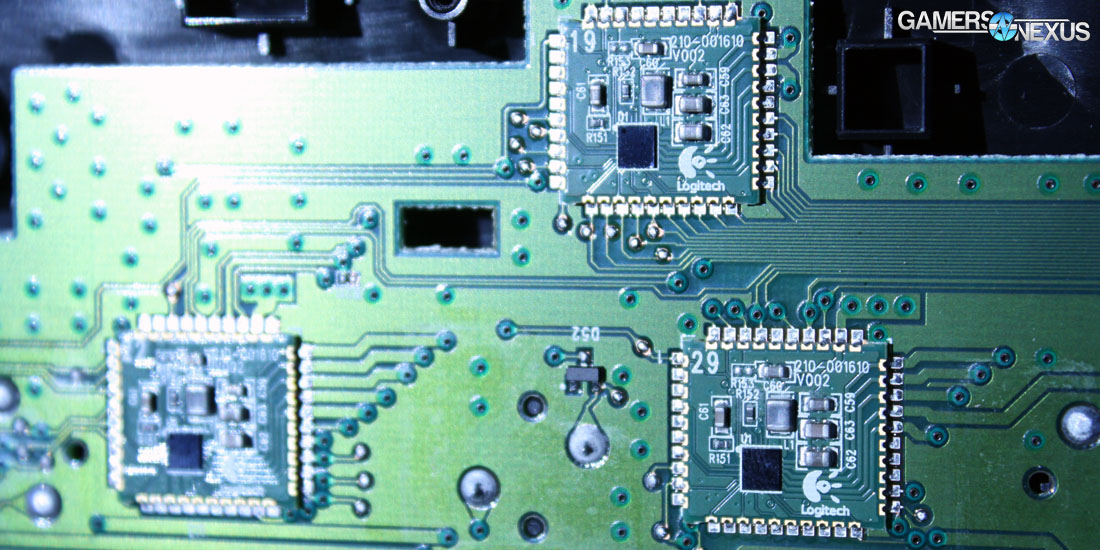 There is obvious effort put into the appearance of the G410. The plastic has different textures, shapes, and the design isn’t simple.

The Logitech G410 is a decent keyboard. It has Romer-G switches, a TKL design, 2-year warranty, RGB backlighting, and reliable software. These are all items that competing keyboards either lack or don’t execute well, making for some positive marks for Logitech. At its price of $130 on Amazon and Newegg, it competes primarily with the Thermaltake Poseidon Z RGB at $100 (review here) and the Corsair Strafe RGB at $140 (review here). In comparison to these alternatives, the G410 competes in its price bracket, but does so underwhelmingly. 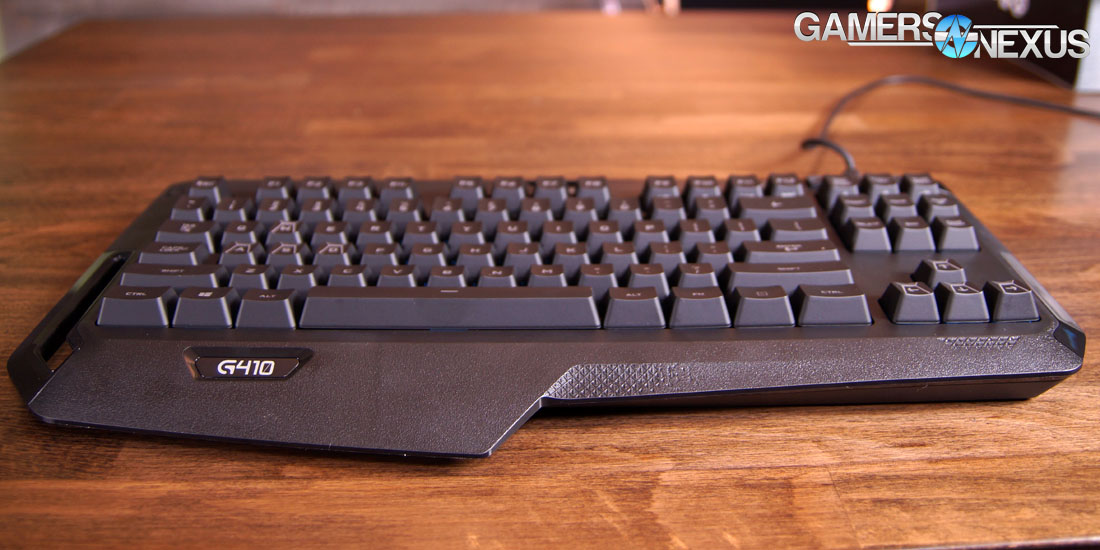 For those on a tighter budget, the Poseidon Z RGB offers a similar lighting experience with the main differences being a lower price (by $30), full-sized design, worse software, a 5-year warranty, and Kailh switches. Above the G410 is the Corsair Strafe RGB which has a higher price (by $10) and is full-sized, but has better RGB lighting, higher build quality, more versatile software, and a useful wrist rest. 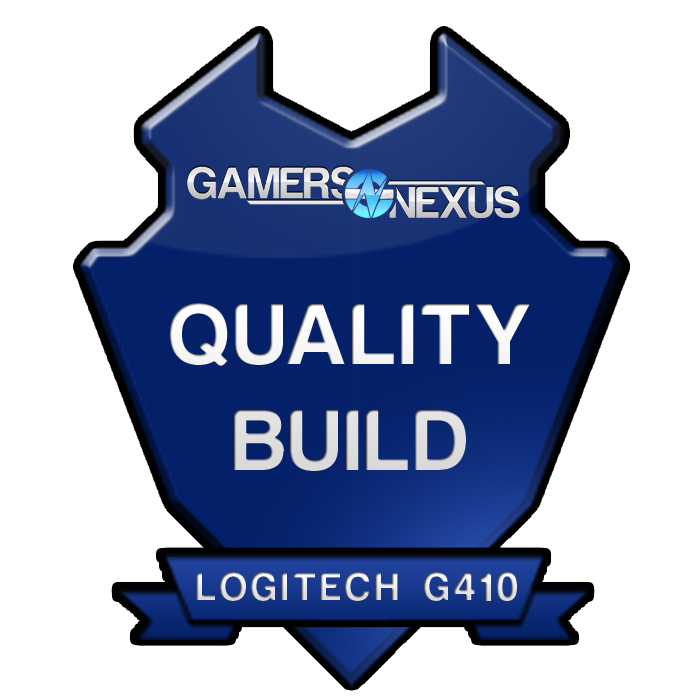 The G410 is smaller and more portable than these two alternatives and makes sense at $130 if the style, tenkeyless design, and Romer-G switches are desirable. If the price of the Logitech G410 dropped by even $10, it would be in a significantly stronger market position than it is now; at its current price of $130, it is in a somewhat awkward price position compared to its nearby competition -- the Corsair Strafe RGB and Thermaltake Poseidon Z RGB. For a TKL board, if you need something more portable, the G410 is worth a shot.