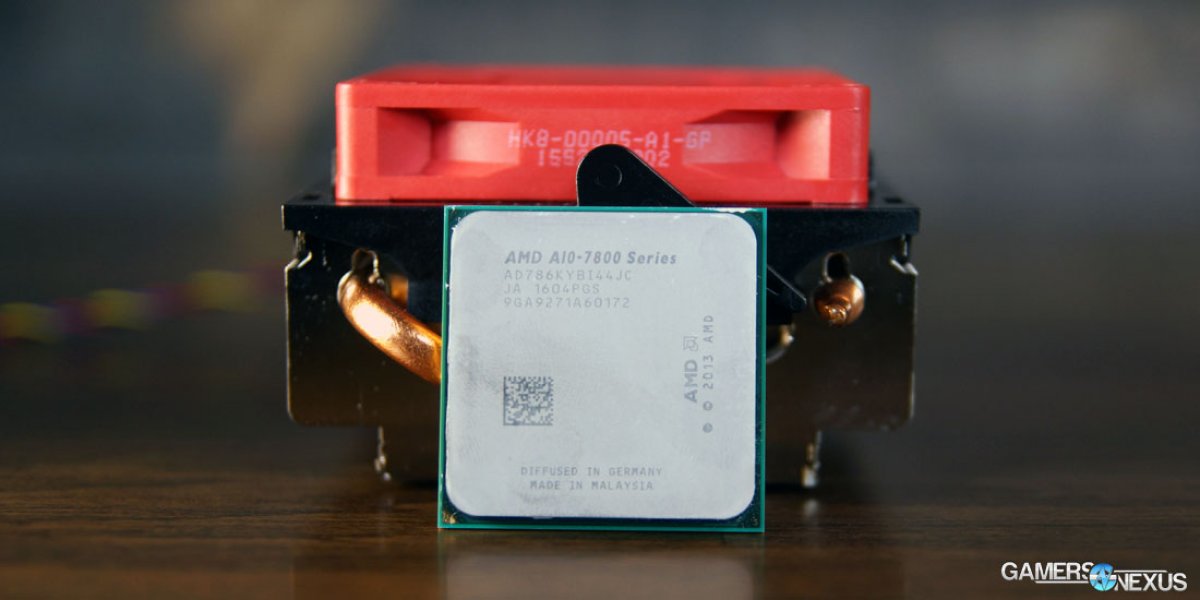 AMD's newest line of APU refreshes does more than just change the clockrates – they've also improved TDP with the launch of the A10-7860K APU. We just received the A10-7860K and A10-7890K APUs for review, including their new Wraith and Near-Silent heatsinks (Wraith review, Wraith noise comparison). Today, we're benchmarking the A10-7860K for gaming (FPS) and thermal performance, particularly vs. the A10-7870K or cheap dGPU solutions.

The new A10-7860K APU runs on Kaveri architecture with TDP upgrades, similar to what was seen on the recently refreshed 300-series AMD GPUs. The A10-7860K runs the same two-module, four-thread (2C/4T) approach as almost every other APU, including the A10-7870K that we reviewed previously. The 7860K unit operates between 3.6GHz and 4.0GHz (boosted) on its 65W thermal package, with an IGP frequency of 754MHz. The lower heat production and power draw should coincide to theoretically allow for longer boosted periods, too, as the APU won't throttle itself as frequently to control temperatures.

There aren't a whole lot, frankly – this is a new SKU slotted-in for a more budget-minded market segment; this, significantly, was our precise criticism of the A10-7870K when we first reviewed it. In fact, our exact quote was:

“It isn't until we eliminate video card purchases that the A10-7870K becomes appealing, and that's somewhat expected. The current $150 price-point of the A10-7870K means that it's dangerously close to CPU + GPU pricing at the low-end […] If the pricing of the A10-7870K falls and stays at the current one-day sale price of $120, we can make a much stronger case for the purchase of a single-unit APU over the dGPU + CPU combo.”

We thought that the unit would be a better seller at $120 – almost exactly what the new A10-7860K is listing as its launch price.

In terms of differences, the new APU is 300MHz slower (base) than the 7870K, but hosts the same core count, streaming processor count, and L2 Cache, yet boasts a reduced thermal package of just 65W. That's the change, here – it's something that'd be seemingly unnoticeable to most users, but a 30W reduction on specs that are largely identical is certainly noteworthy. This speaks to AMD's recent pushes, the Fury X included, to reduce its power requirements following severe criticism from the industry.

We tested using our updated GPU test benches, detailed in the tables below. Our thanks to supporting hardware vendors for supplying some of the test components.

IGP testing was performed with a lower-end set of games due to limitations on the on-die GPU: 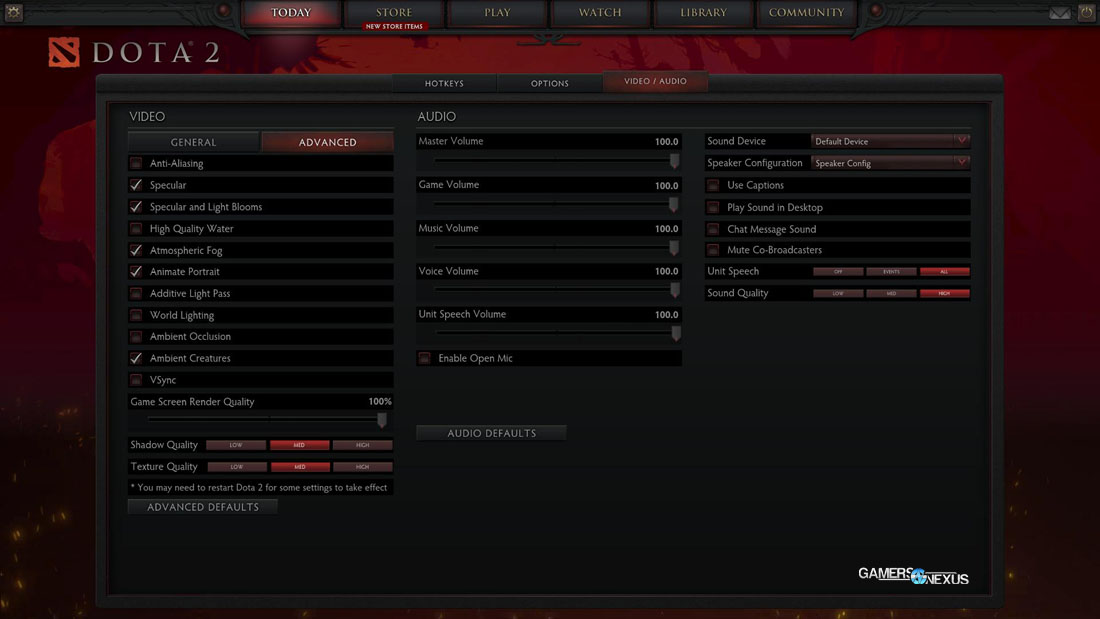 Note that previous tests were reconducted to account for driver updates or changes to game software. We saw some improvements in a few cases, but generally the same results were output (the nature of using established games). Some changes in low values may be present due to modifications made in our methodology since the previous APU review, which was quite some time ago.

Learn about our chamber-validated thermal methodology in more depth here.

Set to “normal” across the board and with AA disabled, GTA V does what we've seen it do in the past – it kills the G3258. 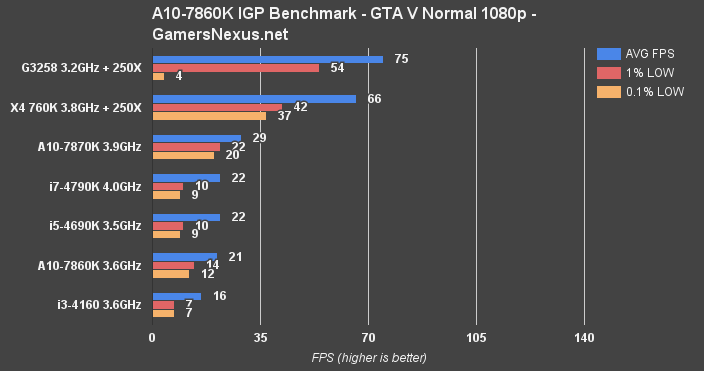 The A10-7860K lands only barely above 20FPS, making it effectively unplayable without support from discrete GPUs. To its credit, the new APU does outperform the i3-4160 (marginally) and its HD-series IGP, but neither lands anywhere remotely close to the realm of playability. In fact, it isn't until cheap dGPUs are deployed alongside CPUs that we see playable framerates – the Athlon X4 760K + R7 250X being the best, in this instance (check the G3258's lows – unplayable chops and dips, resultant of its limited threading and the maxed-out population sliders).

We suspect that AMD's new Athlon X4 880K will be the real chip to watch in this market, as it will handily outperform the 760K; the X4 880K will also be $95, so adding in even a ~$80 el cheapo dGPU will plant it at the 7890K's price and yield higher gaming performance. We'll test these theories once we've got the X4 in-hand.

GRID: Autosport has proven to be a fairly CPU-responsive title. We've found the game to fluctuate heavily based upon CPU frequency, and have kept it on our bench for its reliable test execution.

Note: We have generally observed an Intel advantage with GRID: Autosport. Intel was also a partner of the game's developers back when it first launched, so this isn't all that surprising. 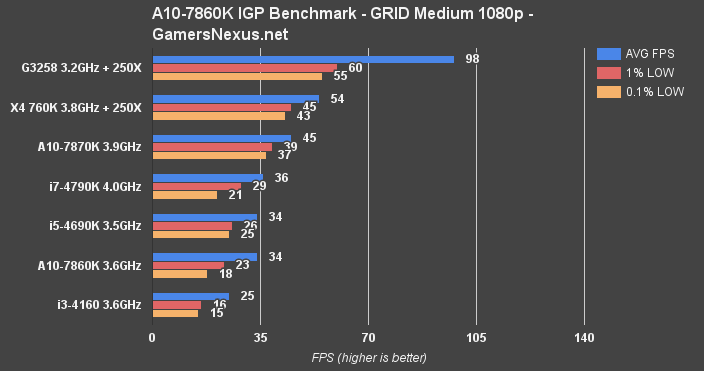 And again, no surprise, we see the cheap dGPU + cheap CPU combinations performing best, with the 7870K taking a strong first among IGPs & APUs. The new 7860K performs significantly slower than the 7870K (27.8%), but both are more-or-less able to handle the racing title with some more tuning. The APUs (and even some Intel IGPs) need to be tuned slightly below “medium” settings for best playability at 1080p without a dGPU. 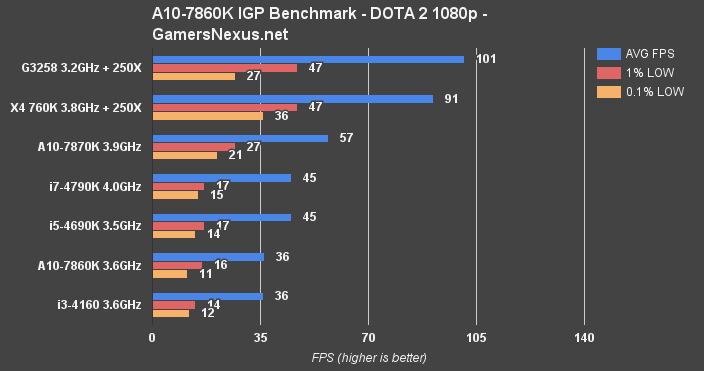 Shadow of Mordor at “Ultra” settings (1080p) provides us with our first dGPU-assisted APU/CPU benchmark. 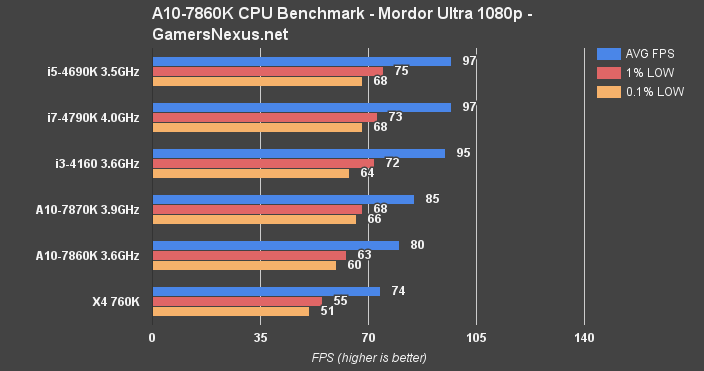 The A10-7860K creates a clear, but marginal, bottleneck for the GTX 980 Ti when compared against the 7870K (6% delta). Against high-end, $200+ and $300+ CPUs, we see that there's an obvious loss of performance by running the i3 and A10 processors, but that loss is in favor of significant savings on total build cost.

The A10-7860K, if paired with a dGPU, is a strong performer and worth consideration – for now. Once the 880K is out, if all goes well, it's likely that the 880K would be a better buy for performance when coupled with a dGPU. At least, in this price range. 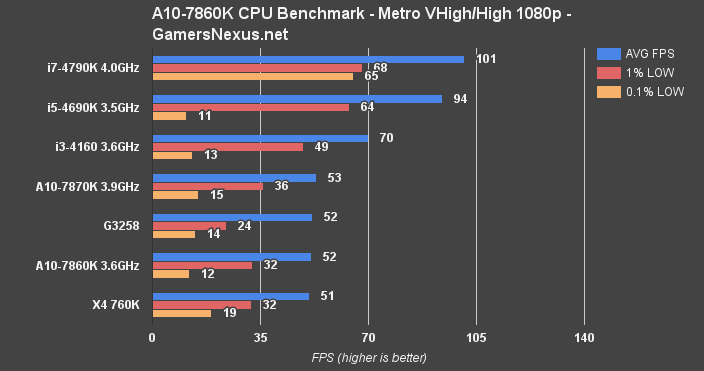 Metro, as we discovered around one year ago, murders 0.1% low times on CPUs shy of 8 threads. This seems to be an issue almost exclusively relegated to Metro: Last Light's benchmark and, in this regard, shouldn't be used to extrapolate performance expectations of all games; in fact, we often see that eight threads hardly yield any advantage over four.

As for the content at-hand, the 7860K stifles the GTX 980 Ti's performance heavily, creating a severe bottleneck with a delta of approximately 64% (vs. top slot). Now, obviously, buyers of a 7860K aren't going to be pairing it with a 980 Ti – but we can see the clear limitation in its performance output. Looking at a more sensible and comparative lineup, the 7870K allows an additional 1FPS AVG, showing that the 7860K is effectively identical (in this scenario) for about $20 cheaper.

GRID – again, a CPU-responsive game that seems to favor Intel – shows another minimal gap between the 7870K and 7860K APUs. 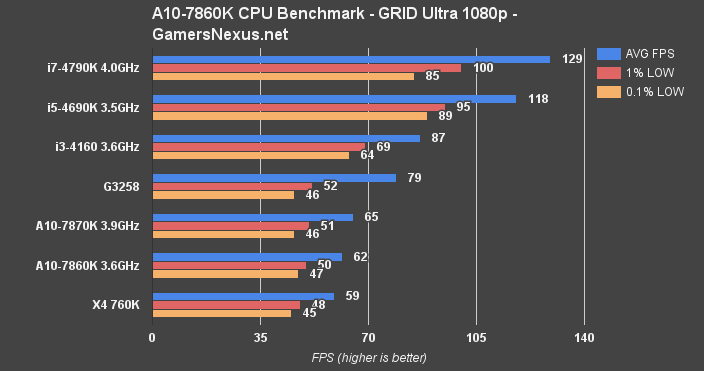 The delta here is ~4.7%, which translates to about 3FPS AVG.

Now, normally, we run these tests with one cooler to see the absolute differences between CPUs – but we decided to equip each APU with its stock cooler for these tests, given AMD's recent and heavy emphasis on the Wraith. The 7870K ran the Wraith, which proved significantly more capable than the smaller, more compact Cooler Master unit that was included with the 7860K. The range is just 3.65C. The 7860K was recorded as operating at ~30C delta T loaded (add in your ambient temperature for the absolute value – if you keep it around ~70F, that's about 20C, so 50C absolute).

Note that we had some issues with software being able to read the CPU thermals correctly with the APUs. This is a common problem with AMD APUs because of the way the GPU component lives on the same die. Thus, measurements above are actually tCase, not tJunction, which is what we'd prefer to measure – but we had trouble getting to the tJunction values for these tests. 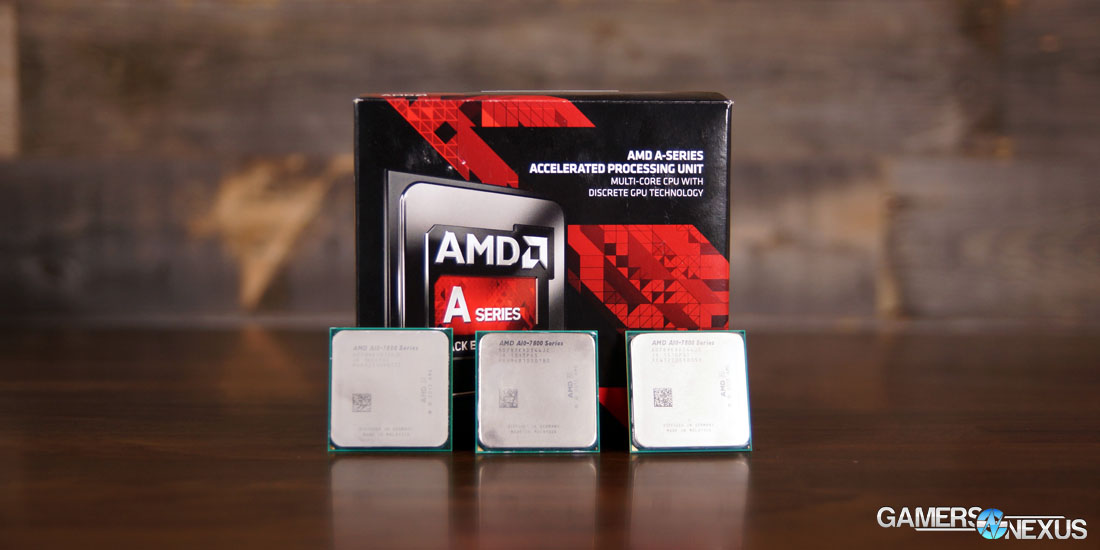 Anyone who's read-through our A10-7870K review may find themselves bored of the conclusion – and you're not alone. The A10-7860K ($120) sees much the same fate, just with a price that agrees with our original demands for the 7870K. The problem, of course, is that the 7860K is not the 7870K; it's slower, marginally at times – noticeably at others, and is now being threatened by AMD's own Athlon X4 880K. We'll soon review that part and have high hopes for the IGP-less CPU, but for now, the 7860K is strictly suited for extremely modest gaming (DOTA2, low settings racing in GRID, etc.) with somewhat agreeable framerates. You'll naturally see significantly bolstered FPS by buying something akin to an 860K ($72) + R7 250X ($80), if on an extremely thin budget, and would instantly outdo the $140 7870K and $120 7860K. Such a combo would run about $150-$160, so it's a bit higher cost, but it's worth throwing another twenty at a computer for these gains.

But that's not true for everyone. For some folks, all that's required is the absolute minimum gaming performance for more simplistic titles, then reliable service as a media box for the rest. As we said in the 7870K review, if gaming is really of nearly no interest (or, at least, high-end gaming), the APUs can be argued for HTPCs as a means to reduce overall cost, power draw, and size, while retaining minimally required gaming capabilities.