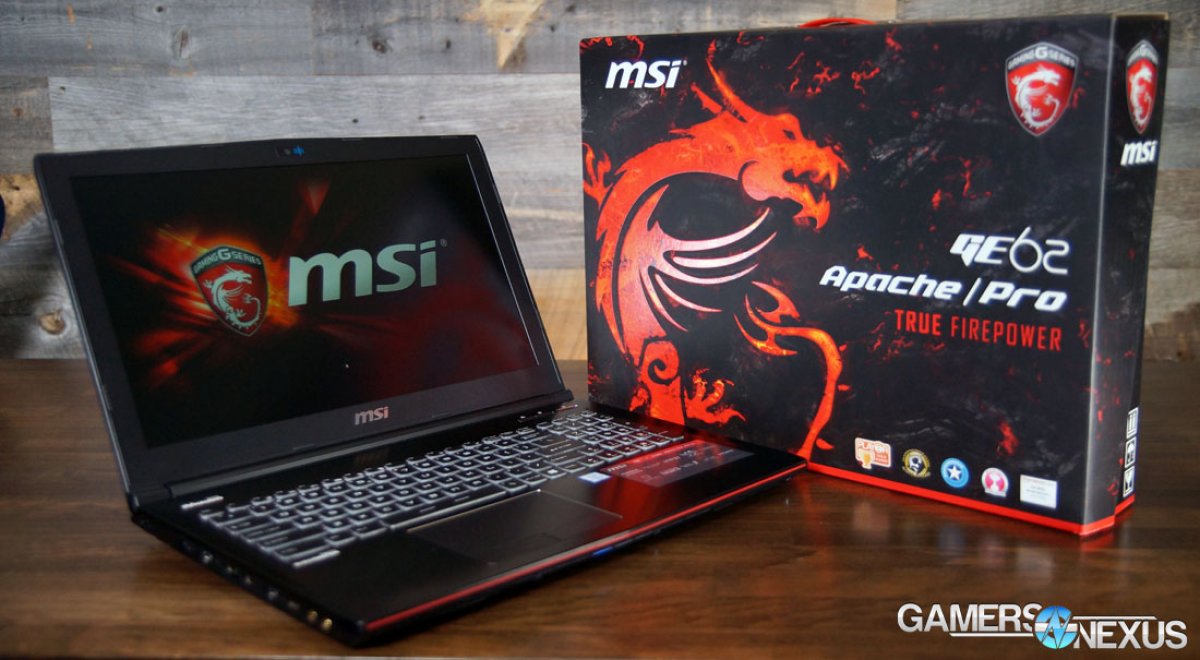 MSI's Apache Pro attempts to fill a critical market segment for gaming laptops – under $1500, capable for gaming, and relatively portable. For as powerful as the GTX 980-equipped GT72 Dominator Pro G is, it's just too large for regular use as a portable machine; it's a desktop replacement. A GTX 960M will generate less heat and should be a more reasonable fit for a ~1” thick laptop than, say, a GTX 970M or 980M would be (we've looked at these).

If you like the thought of the GE62 but would prefer more powerful graphics hardware, MSI does sell one with the GTX 970M for an extra $200. 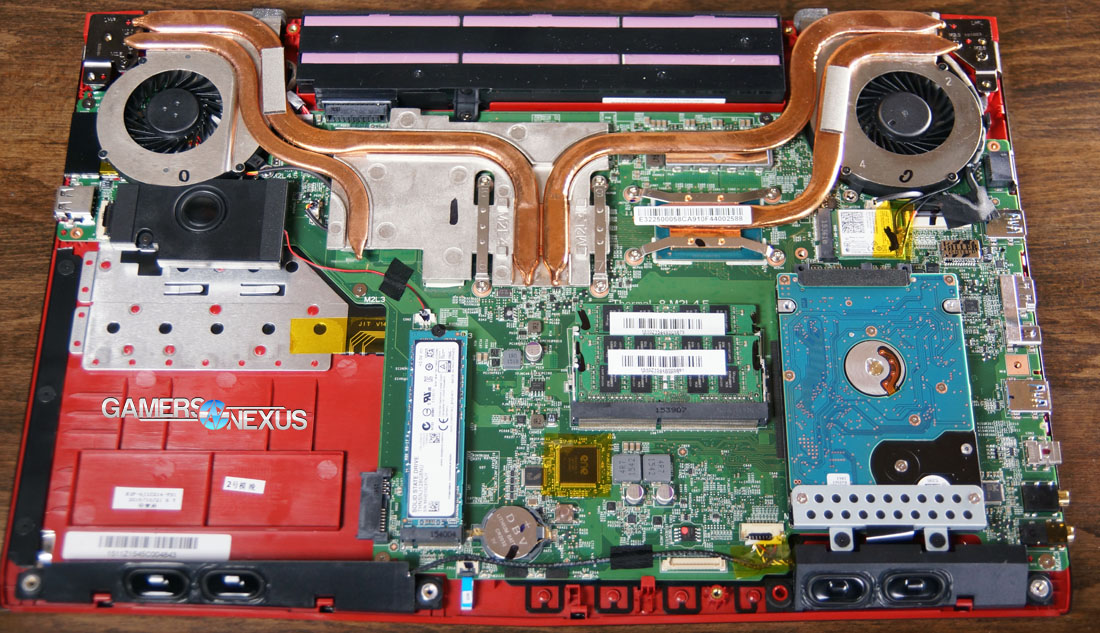 The GE62 Apache Pro uses a dual-fan design with the usual copper heatpipes, terminating with the CPU and GPU under a central, alloy heatsink. The heatsinks lack some of the ribbing found on other notebooks, but do have a few thermal pads present to space points of contact where normal thermal compound isn't present.

Ventilation ports are present in the bottom and rear (exhaust). Like all gaming laptops, this isn't something you'd want to set on a blanket or literal lap – a solid, breathable surface will benefit the cooling design of the GE62. 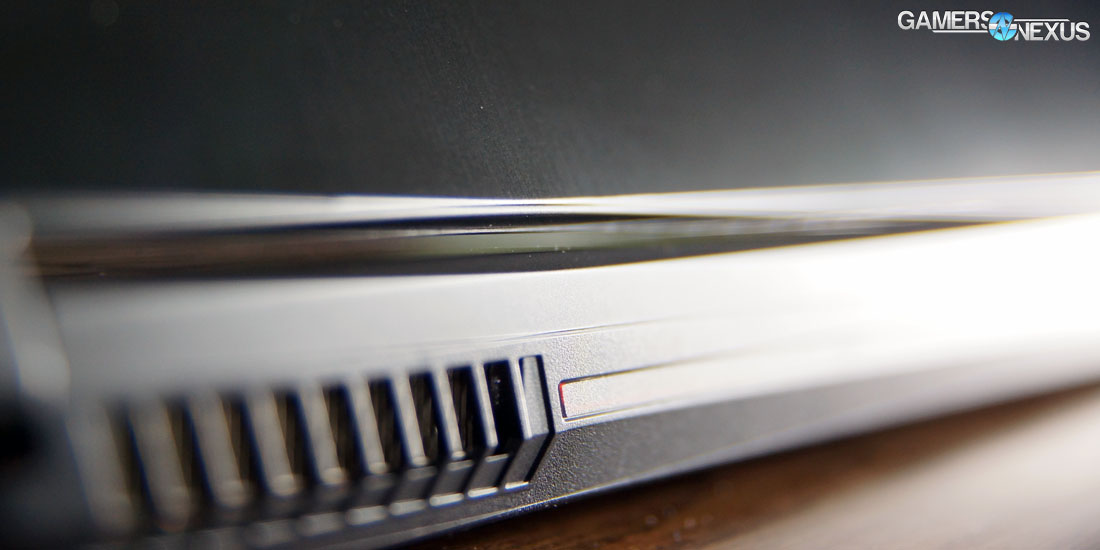 Accessing the rear panel is trivial – a good thing – and MSI has made the RAM, SSD, and HDD immediately exposed to the user. This means no removing a thousand screws to get under the keyboard; with the GE62, you remove the back panel and instantly have access to all the relevant components. Should the thermal compound on the CPU & GPU need a refresher in the future, those are also easily accessed (<30 minutes of work) on this laptop. We hope that this trend of single-compartment component housing sticks, because it does make maintenance significantly easier. MSI's Apache Pro GE62 is among the easiest laptops we've worked with for its size. 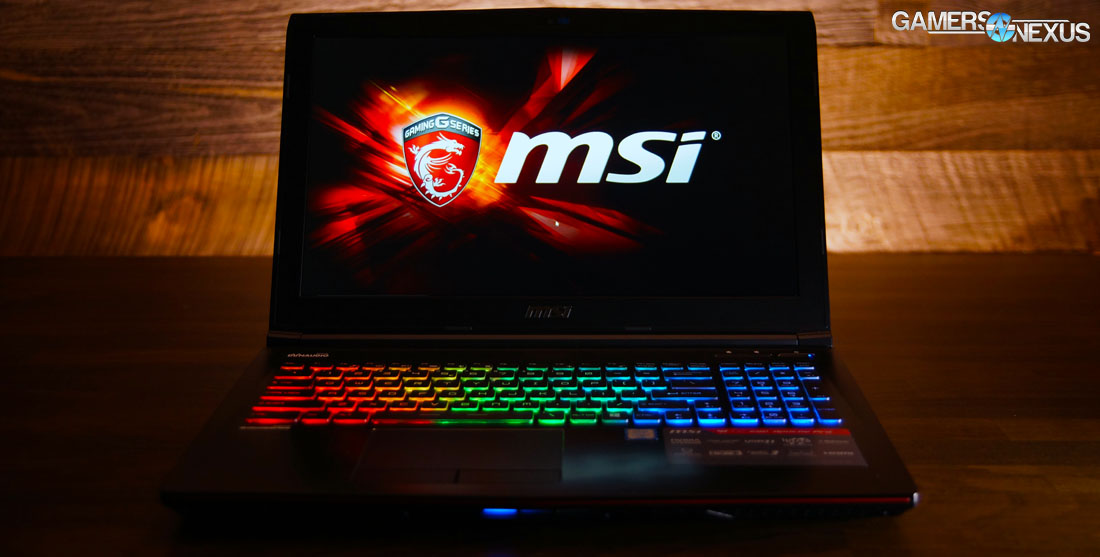 The GE62 employs a standard “Full HD” (1080p) display with around a 1” bezel on either side. An IPS panel makes for more vibrant colors and dark blacks. As an added benefit, viewing angles overall are agreeable – though use cases where you're at a non-oblique angle with a laptop are limited. 1080p is the right resolution for this configuration. Higher resolutions would suffer to support games on the GTX 960M.

Audio for the notebook is generally impressive – at least, in terms of total volume level. We've worked with some laptops in the past (like the ASUS BAL series) where dB levels were so low as to effectively require headphones for use. The Apache Pro doesn't have that issue. Audio is loud and, through inclusion of a bottom-mounted subwoofer, there's theoretically more bass output than on laptops lacking the sub. The audio is “flat” for music – everything's about the same level, so highs will sometimes overpower mids (high hats come through a little too aggressively) – and the bass doesn't always pull through the rest of the noise, despite the subwoofer's inclusion. Overall, though, we're happy with the sound for laptop speakers. It's powerful and agreeable. Anyone seeking more precision should be on a proper audio setup, anyway. 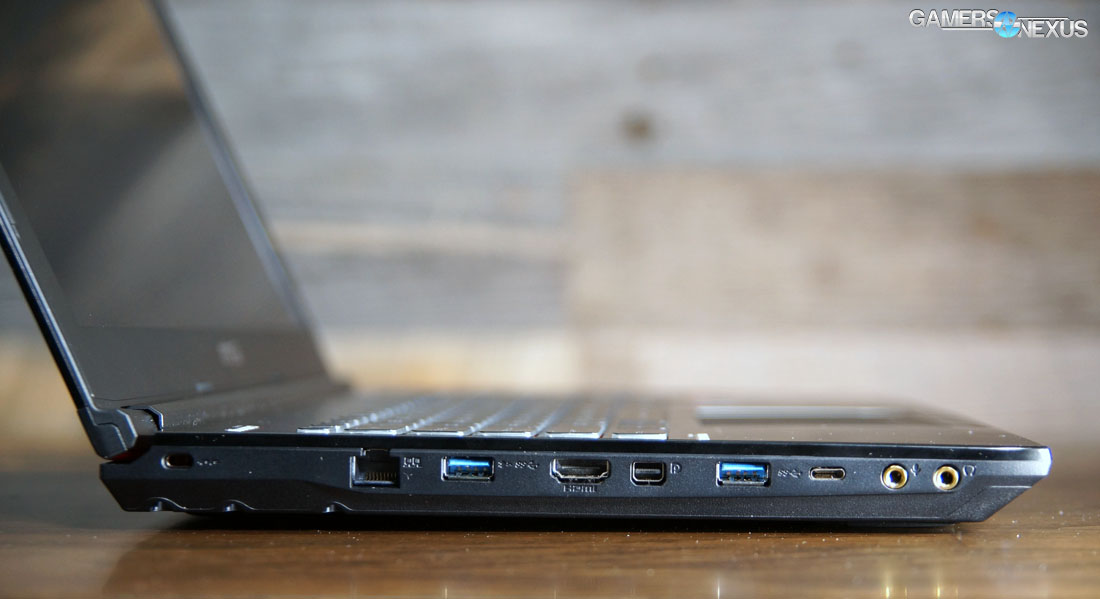 Touchpads are terrible for gaming – but they're still ideal for tight travel conditions. The touchpad on this laptop uses a brushed finish that prevents smudging, a decision we're fond of, and has an agreeable textured feel. The keyboard is fully RGB enabled – a killer for battery life, but flashy for the right gamers. MSI's got a Steel Series button near the PWR_SW to more easily cycle colors on the keyboard. The hardware switch is welcomed, as fooling with software to change keyboard backlighting is always cumbersome. 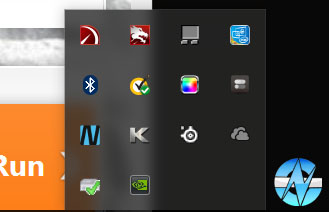 We've not yet encountered serious bloatware issues with any of the SI-supplied systems – that includes Origin, iBUYPOWER, CyberPower, and even past MSI laptops and AIOs. Many years ago, pre-built machines and laptops would often include so much software that it'd earned the name “bloatware,” indicative of slowed-down loading and boot times. That's why we've been relieved to see almost zero software pre-installed on our recent review units. As enthusiasts ourselves, the general rule is “nothing but drivers and an OS” for the pre-built configurations.

MSI has broken that rule with the GE62 Apache Pro. The SteelSeries software is agreeable for compatibility with the keyboard and is relatively lightweight, but it's not alone. MSI has pre-installed Norton, the MSI Warranty tool, Intel's toolset, MSI control panel software, gesture software, the Killer network software (which we hate), and more.

Norton is one of the slowest, most encumbering AV solutions that exists, and it's wholly unnecessary for gaming machines. Maybe in a corporate/biz-client environment, but we feel strongly that Norton has no place on gaming machines for its supreme slowness and poor judgment of gaming applications. Something lighter – like MSE or Avast – would be preferred, and that's ideally left to the user for installation, not the manufacturer. The MSI Warranty tool is obnoxious to new levels, too; instant pop-ups and reminders that are difficult to get rid of, and they do come at a performance (boot time) cost. Like Norton, this is another instance of “just let the user do it.” Include a card with the laptop that says “go here to register your warranty,” then leave it at that; no clunky software required.

It'd be cool if a utility launched on first boot that just said “what do you want,” then installed the desired items from a package, leaving the rest uninstalled but present for future use. Maybe something like Ninite.

As a side note, we had severe thermal issues upon first use of the laptop. We even went as far as “trading” review samples with MSI, figuring it to be a defect from the previous reviewer. After two samples exhibited the same initial issues, though, we were able to work through a fix with an MSI technician. The unit's embedded controller (EC) firmware and BIOS lacked adequately functioning fan profiles, issues that were swiftly resolved with BIOS and EC updates that were provided by MSI. Initial use saw the CPU running at over 41C idle (delta T, so >60C absolute), a number that dropped significantly with the updates. It's an easy fix that we've detailed in the above video.

For games, we tested using Metro: Last Light's benchmark on very high & high (tessellation) settings, DiRT Rally on ultra (4xMSAA), The Witcher 3 on ultra (HairWorks off, SSAO, AA off), and GTA V on very high and ultra (where applicable) with no advanced graphics. All games were also tested on medium settings for the GE62.

All FPS tests were performed three times for parity. FRAPS was used to log FPS data in 30-second increments, then that data was dissected with a spreadsheet. These tests were conducted with AC power connected.

Synthetic testing was performed using 3DMark for validation. Thermal data was logged during the 3DMark Firestrike Extreme GFX 2 test, stressing the GPU at 100% load for 24 cycles.

Battery life was tested using GRID: Autosport on loop until death of the battery.

The latest nVidia drivers (362.00) were used on all systems. MSI Afterburner was used to overclock the GPU core clock and memory clock on applicable systems.

A factory-overclocked GTX 980 cannot be used for these tests. We used a reference 980 for its more linear clock rates.

Games must be GPU-bound to avoid exaggerating the CPU difference. Our more game benchmark section is more slimmed-down than for GPU reviews, but this is for careful methodology reasons – we had to eliminate anything that relied too heavily upon CPUs.