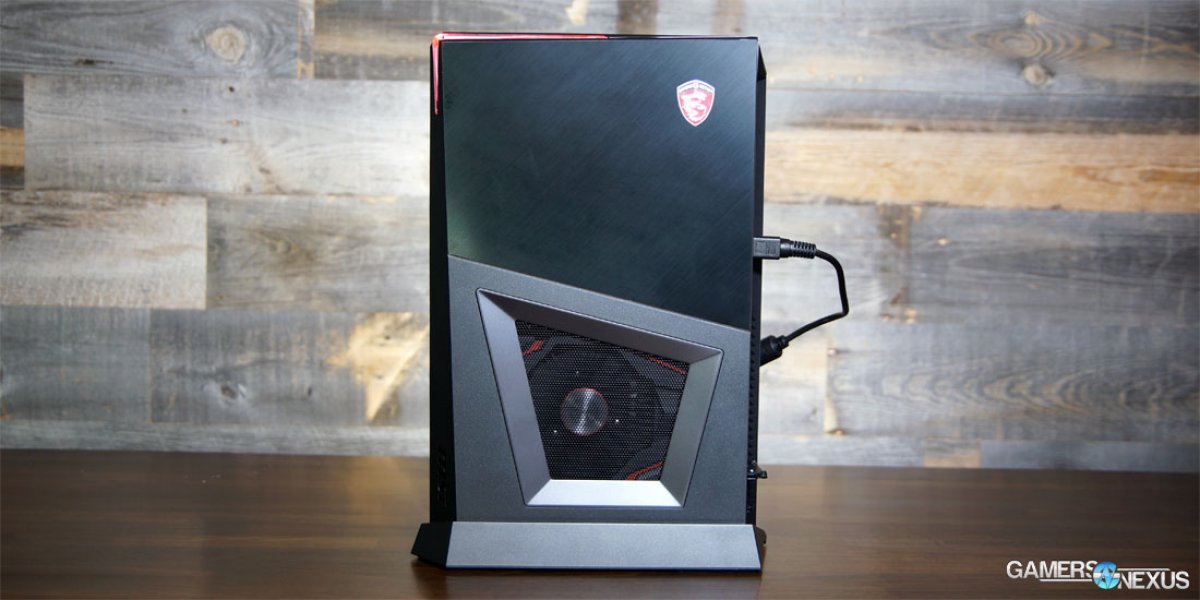 MSI’s Trident claims to be the “smallest VR-ready PC,” and measures 346 x 72 x 232mm in size. The box is about the size of a DVR and can lie flat or stand, using an angled bottom and angled base to create a more artistic means of presenting itself. It’s a little unstable if you’ve got pets or kids, as there’s no locking mechanism for the stand and the unit to click together, but flat positioning is an alternative. You do lose some cooling potential when going that route, given the ventilation.

Our benchmarks have gotten increasingly detailed for systems, and we’re now benchmarking more of the thermals (PCH, drives), noise levels, power draw, and gaming performance. Heuristic VR testing was performed on the Trident, but we still require some time to get VR benchmarking right.

The barebones system aims to be the most customizable, and basically grants you a motherboard and MXM video card with coolers attached. It’s up to the buyer to grab a CPU, memory, and storage.

Keep in mind that a unit this small is half-way to a laptop, and as such, you’re paying for form factor. The $1100 unit’s specs could be closer to a GTX 1070 + i7 if going the DIY route, but you’ll end up with a larger system (even if opting for something like the SilverStone Raven RVZ02). With MSI’s approach, the PSU is left outside of the case (again, half-way to a laptop) and replaced instead with an AC drop to the wall. The unit is rated for ~230W draw. Keep in mind that, as we learned with the dual-adapter laptops, the maximum upward limit of AC adapter power draw is roughly ~300W. Manufacturing a larger adapter significantly increases costs and subjects the unit to different standards & safety certifications than consumer 300W supplies. With this in mind, the PSU-less Trident will never host components that require a PSU larger than 300W – or in this case, 230W, since that’s all it presently includes.

The barebones platform still includes a GTX 1060, though we are presently not positive if that is a 3GB GTX 1060 or 6GB GTX 1060. Newegg seems to indicate a 6GB MXM/AIC, but all the other units are 3GB.

After the barebones unit, the Trident 008 moves to include an i5-6400 desktop CPU (these are socketed platforms) and a single stick of 8GB DDR4-2133 (so halve that speed, since you’re running on one channel). A single 1TB HDD at 7200RPM ships, superseded by the 009’s additional 128GB SSD. This is the only difference between the two. 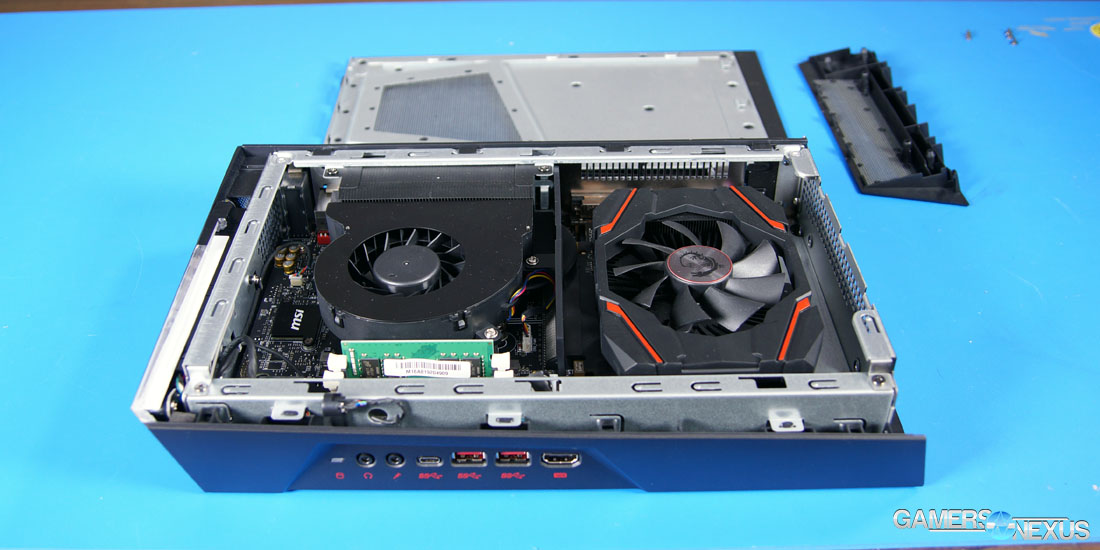 The box itself is interestingly designed, sticking to MSI’s recent history of ‘edgy’ outcroppings and angles. It’s an all-plastic shell on a steel chassis, held together by about five screws. The two panels remove just as side panels would, and the video card can also be easily removed (despite custom form factor).

Looking at the ventilation of the Trident, we’ve got a straight-forward layout: The right side-panel has a large mesh intake that covers the video card’s fan, which is a custom form-factor GTX 1060 3GB with an axial cooler. The CPU uses a small form factor blower fan, exhausting hot air out the back of the case. This also helps take care of some of the warmed GPU air. 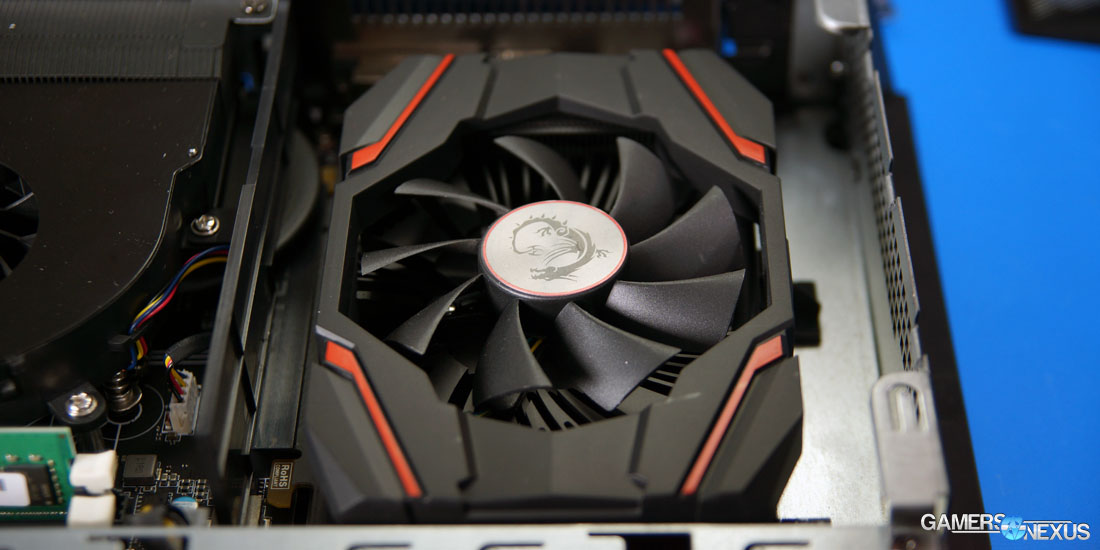 Air exits the back of the case through the GPU expansion slot and the CPU blower fan, Supported by some ventilation on the opposing side-panel of the enclosure.

A lack of dust filters on the primary GPU meshed ventilation does seem an oversight, since these smaller boxes are more dust-prone than their desktop counterparts. The nature of a small unit is that thermal headroom is inherently more limited—temperatures will run closer to their TjMax limitations. Add five months of dust to the mix, suddenly you’ve got blocked fans or heatsinks. A simple mesh would cost pennies and be easily serviceable by the end-user and, because MSI doesn’t seem to want to let users open their enclosures (“Warranty Void” sticker is hiding one of the screws), providing a dust filter seems obvious. As it is now, any user privy to natural dust build-up will have to tamper with the seal to clean the thing. 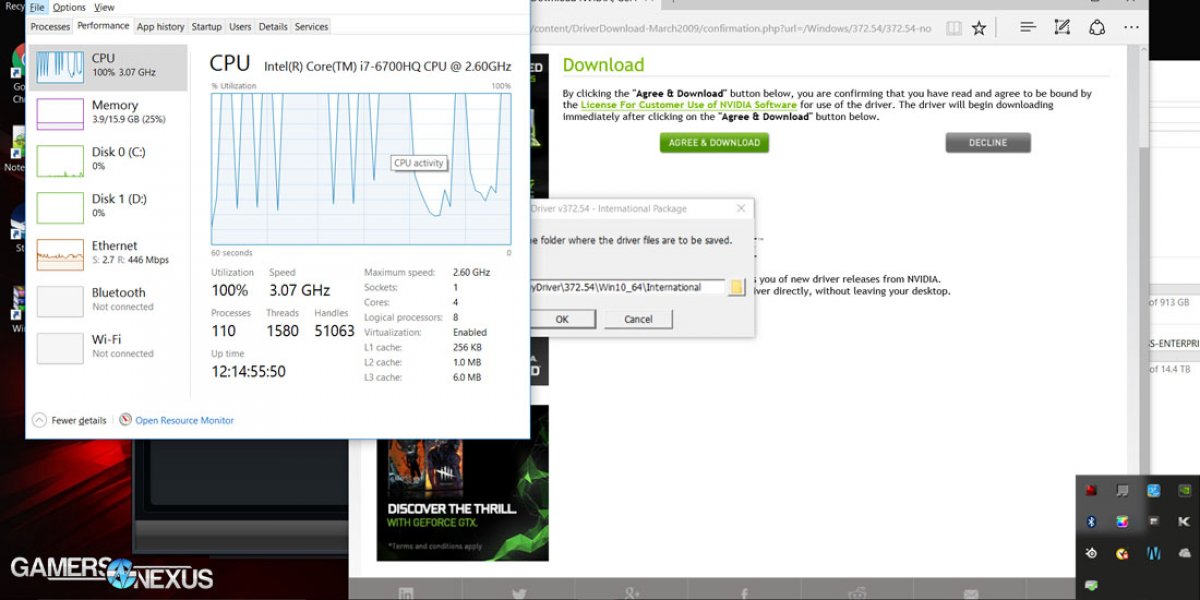 The Trident sticks to MSI’s approach to software on a pre-built system, which basically entails Norton, a few control panels, audio software, and warranty registration pop-ups that mar the initial user experience.

This isn’t the first time that we’ve had to rail against MSI’s bloatware, either, and it’s a shame. Last time, we saw performance differences upwards of 10-20% in some games when running the out-of-box configuration on one of MSI’s laptops. The Trident still has Norton and still has a bunch of other software, but it’s easy to remove. We got rid of it first thing, so all benchmarks were performed with the bloatware uninstalled. Expect worse numbers with it installed. Hopefully, MSI will eventually get the hint and stop tainting their hardware with software that slows it down.

Note that all thermals, FPS, noise, and overclocking tests were performed before our initial tear-down.

NVidia's 376.09 drivers were used for testing. Game settings were manually controlled for the DUT. All games were run at presets defined in their respective charts.

Power draw for the Trident was measured with FurMark and P95 with LFFTs simultaneously blasting.

Continue to Page 2 for the thermal, noise, power, and FPS benchmarks.