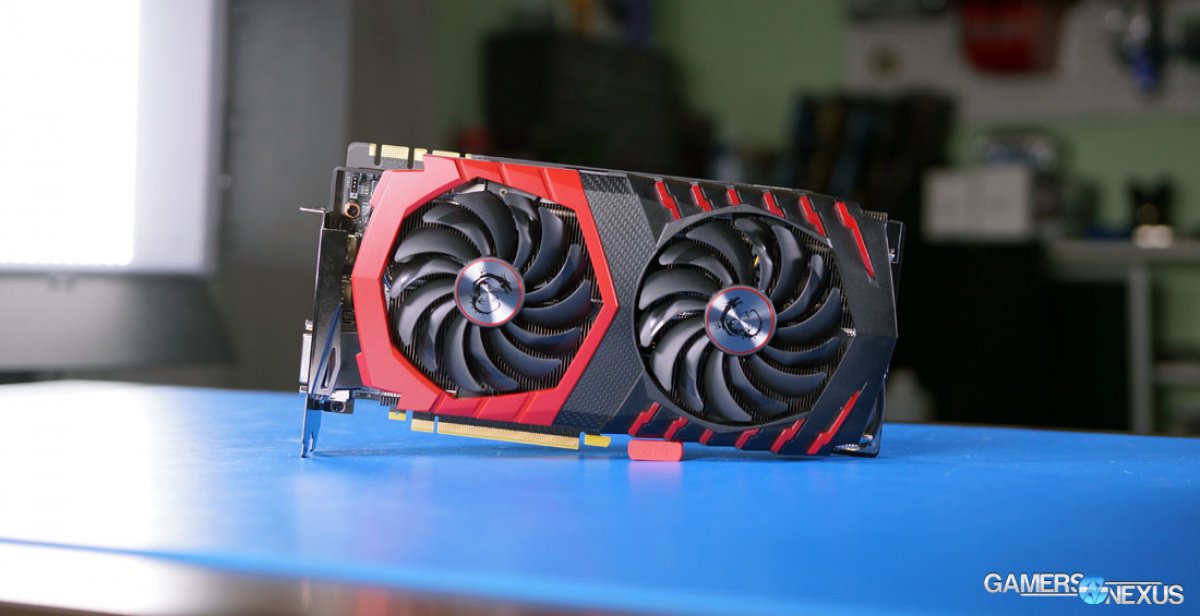 We’re reviewing the new MSI GTX 1080 Ti Gaming X card today, priced at $750 and positioned as one of the highest-performing gaming cards on the market. These tests will extensively look at thermals, given that that’s the primary differentiator between same-GPU video cards, and then look at gaming performance (in FPS) versus the Reference card and our Hybrid mod FE card. Part of our thermal testing will include performance analysis with and without a backplate. Noise levels are going to be the same as the last Twin Frozr card we tested, which can be found here.

This generation of GTX 1080 Ti cards has gone big. MSI’s Gaming X is already large, but the Gigabyte unit that we’re reviewing next is similarly big in the multi-slot department. The Gaming X uses MSI’s known twin-frozr cooler, with modifications to the underlying aluminum heatsink to increase surface area and fin density. Noise output is therefore identical to the noise output of previous Twin Frozr coolers we reviewed for the 10-series, including the GTX 1080 non-Ti Gaming X. 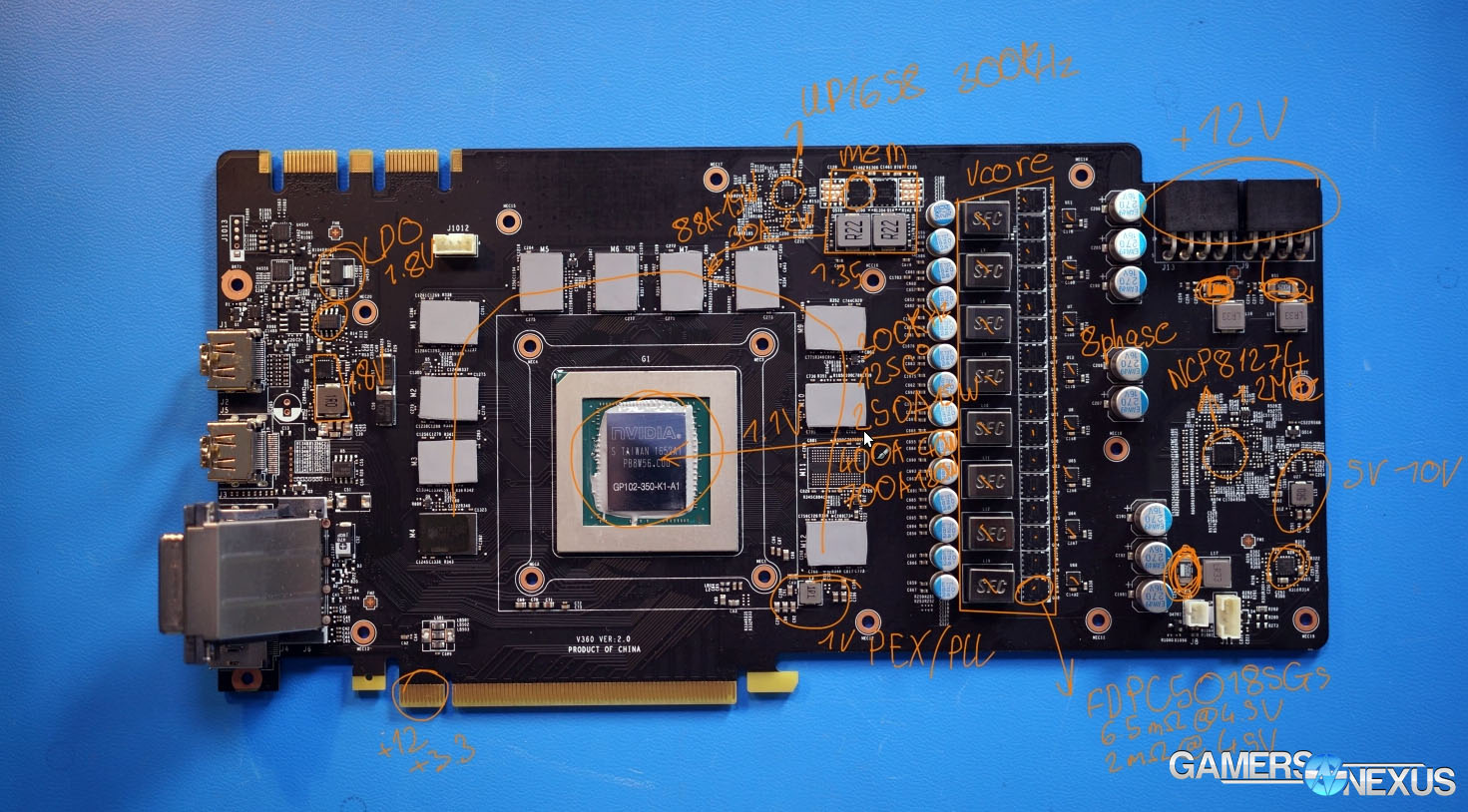 Our PCB & VRM analysis of the MSI GTX 1080 Ti Gaming X can be found here, as conducted by overclocker Buildzoid. Briefly, the card uses 16 FDPC5018SGs hooked up to 8 inductors, controlled by 8 driver ICs, resulting in an 8-phase VRM with 4 MOSFETs per phase. The Fairchild 5018SGs are dual-FET packages with both high-side and low-side FETs contained. This bulked-up VRM results in a VRM that outputs only 15W of heat under a typical 250A load, or would output ~40W of heat under an intense 400A load (assuming 125C and a safe 300KHz switching frequency). 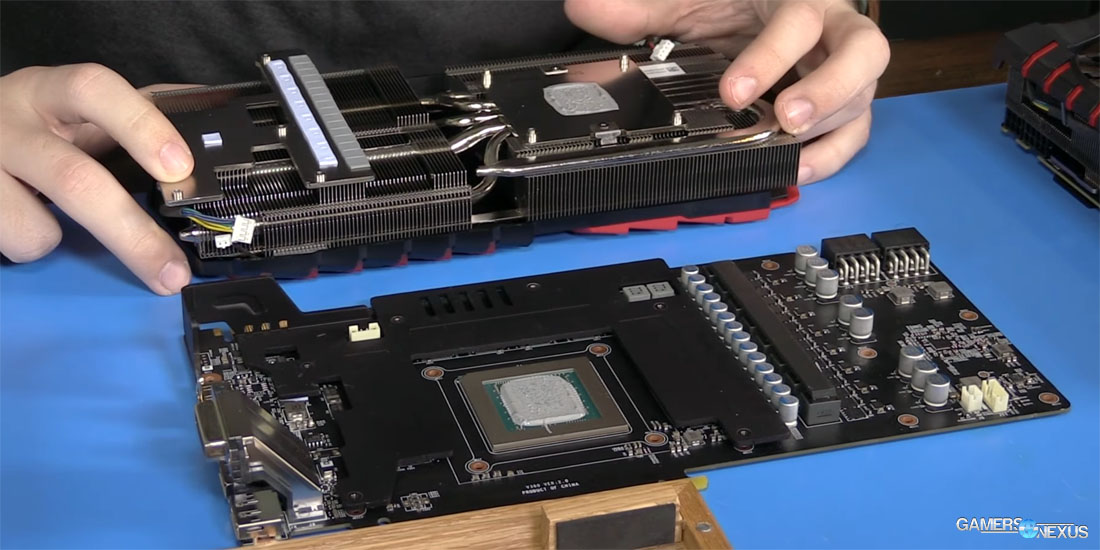 We previously tore down the MSI GTX 1080 Ti Gaming X card over here, but will recap in today’s review.

The cooler consists of two isolated baseplates contacting the GPU proper (and VRAM) and the VRM components. These each hook into the heatpipes and, therefore, the finstack above them, but are isolated to help with controlling temperatures around the board. 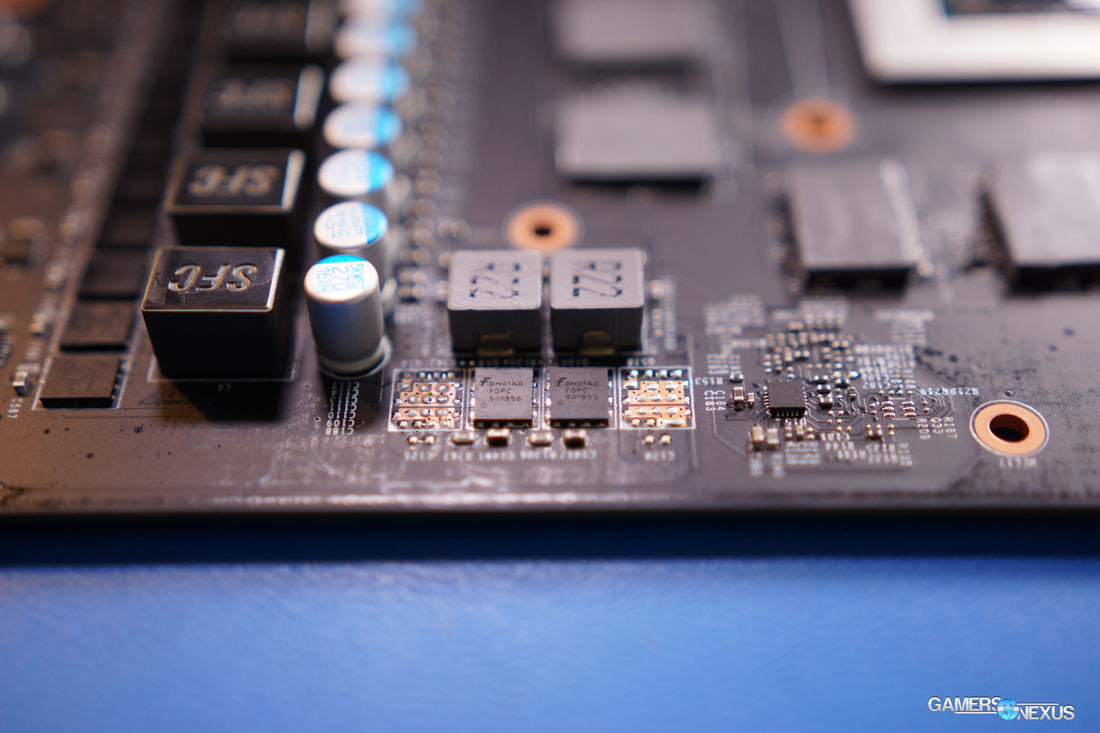 The GPU coldplate contacts the silicon with a copper coldplate, isolated from the surrounding aluminum plates that contact the VRAM modules. The VRAM modules sink into the same block, ultimately, and so we might see some slightly higher core temperatures than on cards where VRAM doesn’t sink to the same block as the GPU. At the end of the day, an extra couple degrees on the GPU core won’t change anything, but shedding temperature from VRAM will make a more meaningful impact with regard to differentiating design from competition. EVGA and Gigabyte have both explored this, mostly with their respective FTW Hybrid and Xtreme Water cards. As for the aluminum heatsink, we’re looking at a large fin stack that covers the entire card, with some channeling for the inductors (connected to the fins via thermal pad – and yes, despite smaller surface area, it does help) and for the capacitor bank. The FETs and driver ICs also independently contact the separate baseplate via thermal pads.

MSI’s cooler is the usual Twin Frozr design, and hasn’t had a refresh since the 10-series launch. These are 100mm axial fans that can spin down to 0 RPM, and tend to hover around 55% in their default profile when tortured.