NVidia’s Titan Xp 2017 model video card was announced without any pre-briefing for us, marking it the second recent Titan X model card that took us by surprise on launch day. The Titan Xp, as it turns out, isn’t necessarily targeted at gaming – though it does still bear the GeForce GTX mark. NVidia’s Titan Xp followed the previous Titan X (that we called “Titan XP” to reduce confusion from the Titan X – Maxwell before that), and knocks the Titan X 2016 out of its $1200 price bracket.

The Titan Xp 2017 now firmly socketed into the $1200 category, we’ve got a gap between the GTX 1080 Ti at $700 MSRP ($750 common price) of $450-$500 to the TiXp. Even with that big of a gap, though, diminishing returns in gaming or consumer workloads are to be expected. Today, we’re benchmarking and reviewing the nVidia Titan Xp for gaming specifically, with additional thermal, power, and noise tests included. This card may be better deployed for neural net and deep learning applications, but that won’t stop enthusiasts from buying it simply to have “the best.” For them, we’d like to have some benchmarks online.

Above is the specs table for the Titan Xp and the GTX 1080 Ti, helping compare the differences between nVidia’s two FP32-focused flagships.

The initial renders of nVidia’s Titan Xp led us to believe that the iconic “GeForce GTX” green text wouldn’t be present on the card, a belief further reinforced by the lack of “GeForce GTX” in the actual name of the product. Turns out, it’s still marked with the LED-backlit green text. If you’re curious about whether a card is actually a Titan Xp card, the easiest way to tell would be to look at the outputs: TiXp (2017) does not have DVI, while Titan X (Pascal, 2016) does have DVI out. Further, the Titan Xp 2017 model uses a GP102-450 GPU, whereas Titan X (2016) uses a GP102-400 GPU.

A reader of ours, Grant, was kind enough to loan us his Titan Xp for review and inevitable conversion into a Hybrid mod (Part 1: Tear-Down is already live). Grant will be using the Titan Xp for neural net and machine learning work, two areas where we have admittedly near-0 experience; we’re focused on gaming, clearly. We took the opportunity to ask Grant why someone in his field might prefer the TiXp to a cheaper 1080 Ti, or perhaps to SLI 1080 Ti cards. Grant said:

“Data sizes vary and the GPU limits are based on data size and the applied algorithm. A simple linear regression can be done easily on most GPUs, but when it comes to convolutional neural networks, the amount of math is huge. I have a 4 gig data set that cannot run its CNN on the 1080 Ti, but it can do it on the Titan X.

Also, for us, CUDA cores matter a lot. And the good machine learning algorithms, even Google's tensorflow, need CUDAs and nVidia-specific drivers to use GPU.

SLI does not do anything for us. Multiple GPUs can be used to split-up data sets and run them in parallel, but it's tricky as hell with neural networks. With multiple cards, it's better for us to run one algorithm on one card and another algo on the next card.

Even Google created their own version of a GPU for deep learning that can be farmed much better than any nVidia option.”

According to this user, at least, the extra 1GB of VRAM on the TiXp is beneficial to the workload at hand, to the point that a 1080 Ti just wouldn’t even execute the task. This may explain part of why the 1080 Ti seemingly had such an odd memory pool: Yes, of course the GPU has a more limited bus, but there’s a reason for that. NVidia might have wanted to keep machine learning-class users in Titan-level hardware, rather than splitting supply of a 1080 Ti between audiences.

Whatever the reason for the Titan Xp, we’re testing it for gaming, because people will still buy it for gaming. The extra 1GB VRAM is irrelevant in our use case, but we’ve still got potential performance gains from other differences.

Our tear-down for the Titan Xp is already live, seen here: 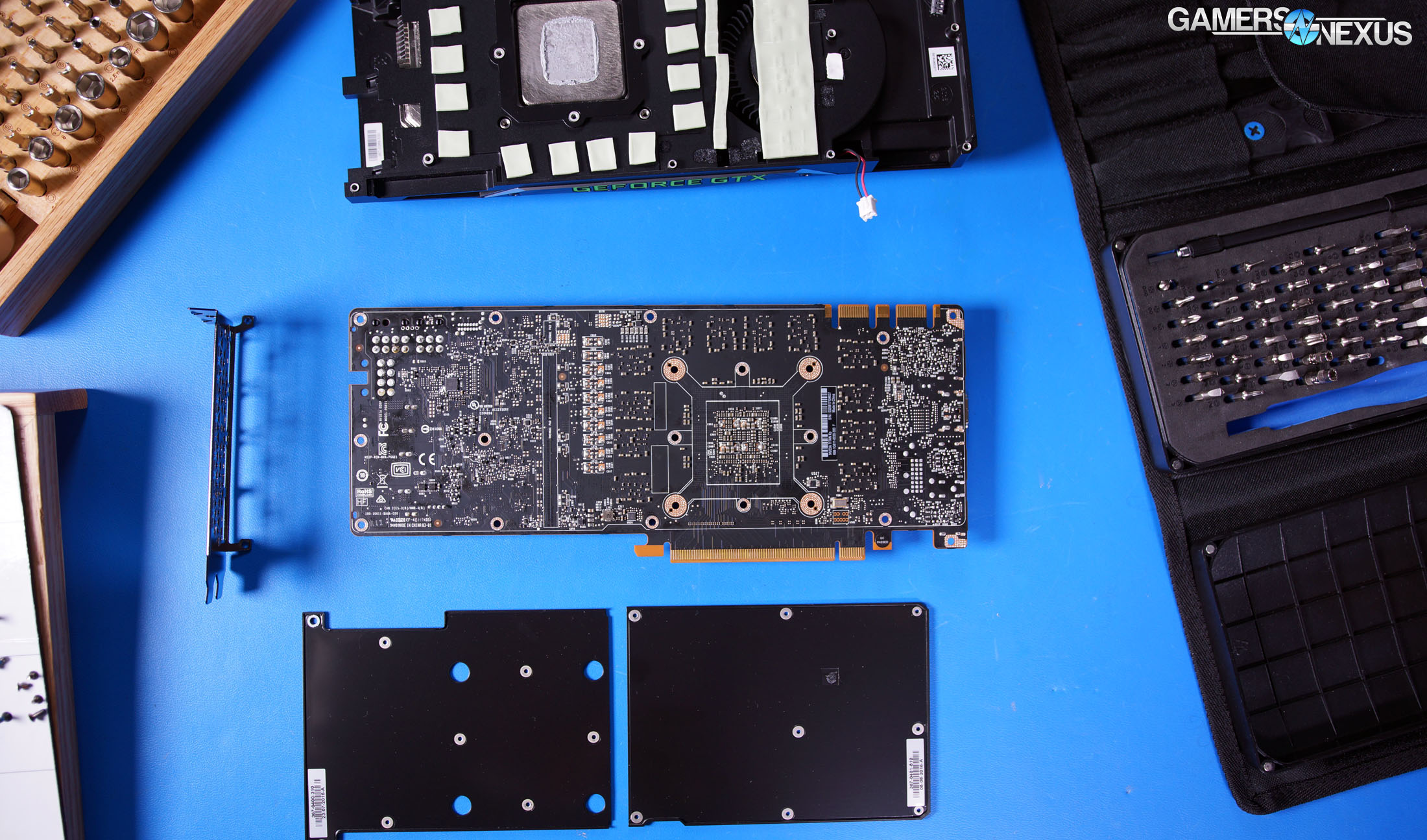 The cooler leverages the same nVidia blower-style layout found on FE cards. There’s an aluminum heatsink with nickel-plated copper coldplate and vapor chamber for direct GPU contact, with the aluminum baseplate making up the bulk of the heat transfer needs for the power components. The blower fan takes care of both the VRM and GPU (and VRAM), and we measured several power+VRAM components during test to better understand thermal behavior of the product.

Here’s our overclock progression table, including pass/fail for each step. The last numbers marked as “pass” will be used during benchmarking:

All testing for this review was conducted prior to tear-down (other than where thermocouples were required, obviously). The Hybrid mod results will be posted separately.

Let’s get into the testing.