To this end, that also means that declaring hard victors is sort of rough – all those statements are made based on our samples, but it’s always possible that one card might perform +1% in our sample, but -1% in another sample. Among other reasons, this is why gaming performance gets a back seat once we’ve determined a baseline for AIB partner performance of a new GPU.

What matters more is the cooling solution, the PCB quality, and the noise levels. We are therefore checking for things like component quality (already done separately, but revisited below), thermals, and noise output. Gaming, again, gets a back seat. Overclocking is also inevitably limited by Pascal itself, so even that is relatively unexcited for same-GPU video card comparisons.

We’ve already posted videos showing a tear-down of the EVGA 1080 Ti FTW3 (found here) and analyzing in great depth the VRM & PCB of the FTW3.

Recapping the most important bits: The GTX 1080 Ti FTW3 uses an excellently engineered PCB and power delivery solution, accompanied by an equally over-engineered cooling solution. The Vcore VRM is comprised of Alpha-Omega Semiconductor E6930 Dual-N MOSFETs, which package high-side, low-side, and diode components into the same package. There are twenty total FET packages on the board, ten driver ICs, and five doublers, combined with an NCP81274 voltage controller. The voltage controller is an 8-phase controller capable of 1.2MHz switching frequency. EVGA is using NCP81162 doublers to load balance between the two phases, largely eliminating the risk of out-of-balance current between two phases (as they are balanced by EVGA’s doublers). This also reduces strain on the 12V rail, which should make the power supply happy.

Learn more about all of this in our PCB breakdown video:

As for the rest of the card, it’s largely comprised of overcompensating cooling solutions across all devices – yes, even fan controllers are connected via thermal pad – and three fans to individually cool partitions of the card. The heatsink is split into two primary halves – GPU+MEM and PWR – and uses a mix of EVGA’s new fin designs to improve cooling efficiency. Although the fin density and placement aren’t all that unique, the tail of the fins can be: EVGA switches between straight fins (with no contact to componentry), L-shaped fins (with contact to thermal pads, but permitting airflow), and closed fins (for full contact, but no airflow). The type of fin used depends on which component that part of the cooler covers; VRM components tend to contact the finstack via L-shaped fins, whereas less critical inductors are under straight fins. 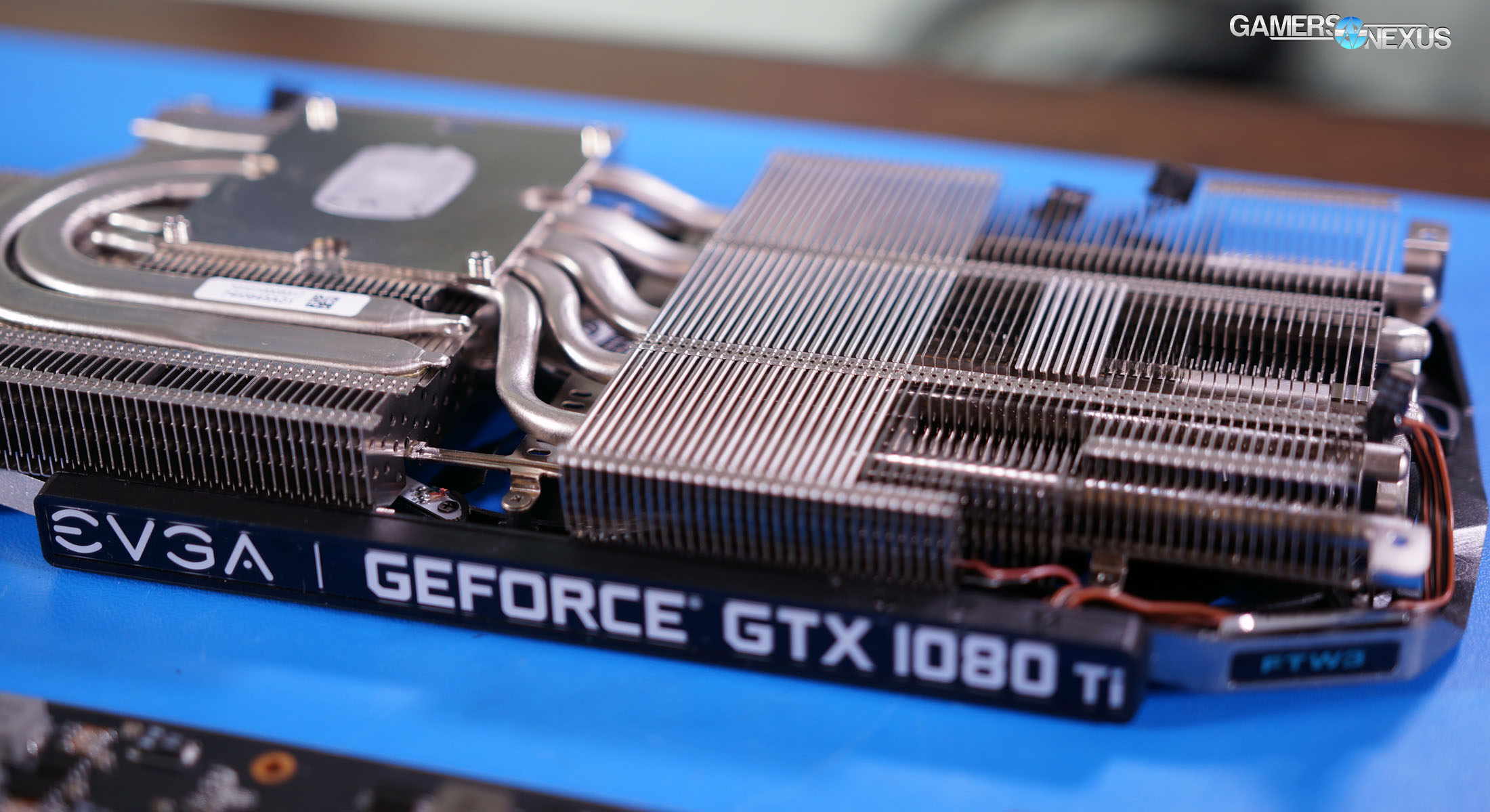 Several MCUs are on the card for individual and asynchronous fan control, slaving to one of EVGA’s somewhat aggressive fan profiles (more on that momentarily), and the MCUs report to a functional RGB LED GPM meter on the card. GPM means “GPU,” “Power,” and “Memory.” This card is laid-out in a fashion that it’s more accurate to say GMP. Graphics and memory fans are on the left, power is on the right.

As for thermistors used, we previously detailed in great depth that EVGA is using negative type thermistors (NTCs) in 9 locations on the board. What’s important here is that the location of those thermistors is not the same between EVGA ICX devices, so PWR1 does not necessarily equal PWR1 between two cards. The SC2 card, for instance, uses a reference nVidia FE PCB with EVGA’s NTC thermistors positioned all along the front of the board, while the FTW3 PCB positions a few on the back-side. PWR4 is the biggest difference, which we’ll talk about in the thermal section.

The two can be compared, but only insofar as GPU and MEM readings (and even then, only if EVGA never changes which memory modules receive which reporting tag).