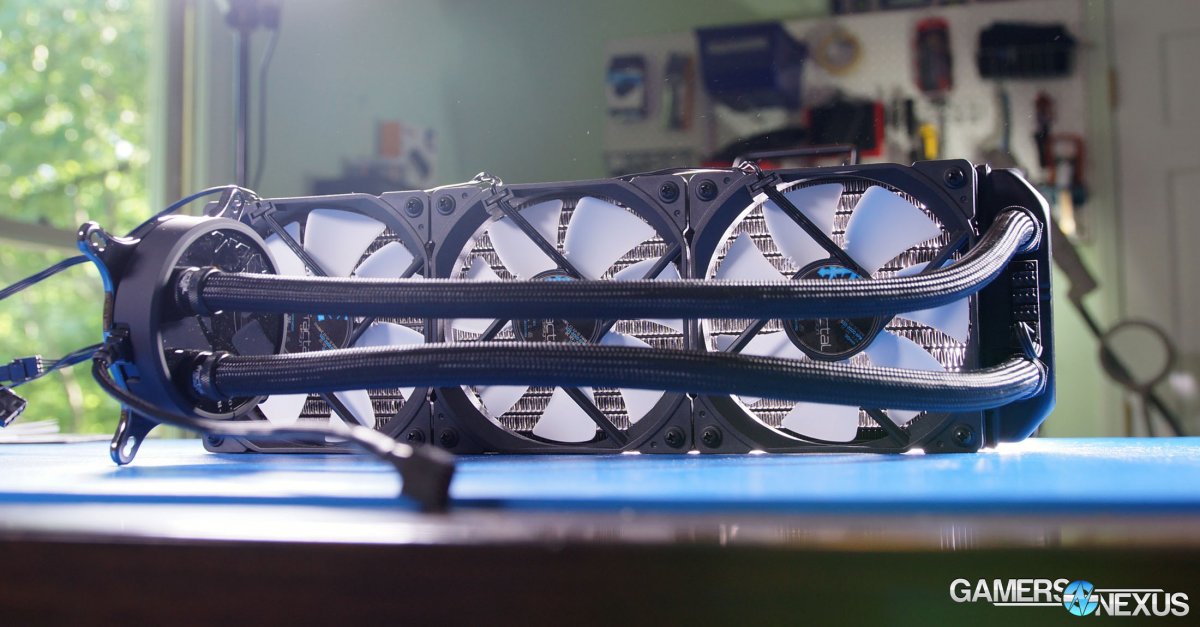 Our first test initializes the review with just a few of the coolers – we’ll add more than a dozen tests to the chart in a moment.

This chart is on the tail of our ASUS ROG Strix review, which introduced noise-normalized temperature testing at a fixed dBA output. Here, we’re testing the H115i, Kraken X62, Kraken X42 for perspective, and Fractal Celsius S36 at a fixed noise output of roughly 40dBA. This helps us determine cooling efficacy at a known noise level, equalizing for some product differences.

The difference between Fractal and Corsair is within our range of uncertainty, meaning that the two are effectively equal in temperature performance at 40dBA. Each unit reads-out a delta T value of about 37-38C over ambient, with idles at 5.5-6C delta T over ambient. The Kraken X62 is at 35.4C delta T for a 2-3C lead, and although this is measurable, it’s not necessarily a game-changer. An extra 2C off the CPU won’t change performance at this level. That said, it does mean that we could run a lower fan curve, like one that meets 38-39dBA, and achieve equal performance to Fractal and Corsair.

Fractal Celsius S36 Temperatures vs. All 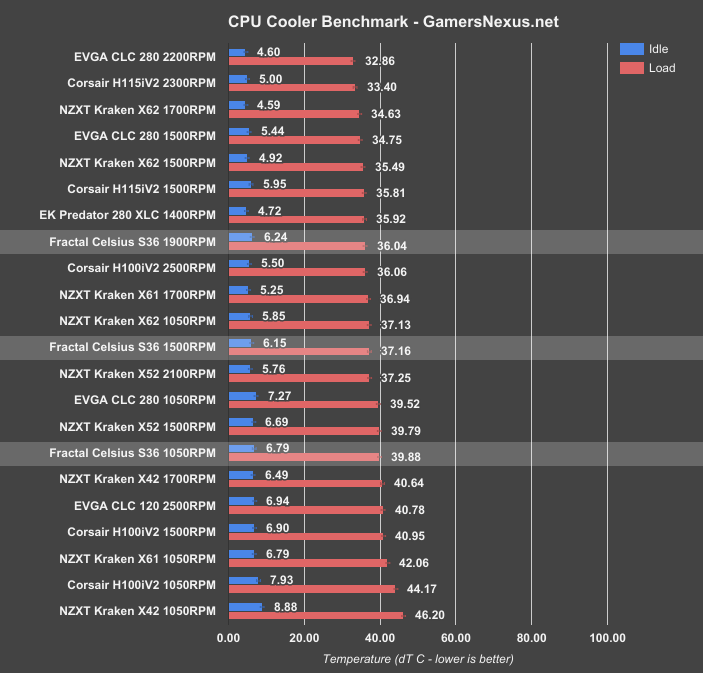 Let’s flood the chart with more data, but keep the Fractal Celsius coolers highlighted for ease.

At maximum RPM, the Fractal S36 360mm radiator runs its fans at approximately 1900RPM, landing its thermal performance at around 36C delta T over ambient load. We’re producing a noise output of about 49dBA at this point – fairly loud – while ranking about where the Corsair H115i and Kraken X62 at 1500RPM stand. The X62 at 1500RPM measures about 46.4dBA in our noise test, making it a little quieter than the Fractal S36 at max RPM.

Fractal’s maximum cooling capacity is lower than the 280mm coolers in the top 3 slots on the bench, in our testing, though fills a middle-of-the-pack performance range from 40C delta T to 36C delta T. At 1050RPM, Fractal’s S36 is able to maintain a 40C delta T load temperature alongside a 33.6dBA output. This is similar in thermal performance to the Kraken X52 at 1500RPM, with a 42dBA output.

The larger radiator helps in this regard, maintaining lower noise levels at a still acceptable temperature. The EVGA CLC 280 costs $120 and maintains a temperature of about 40C delta T with a 1050RPM speed, outputting a noise level of about 37.1dBA. This is the most comparable to Fractal’s low-RPM performance, though is still louder. 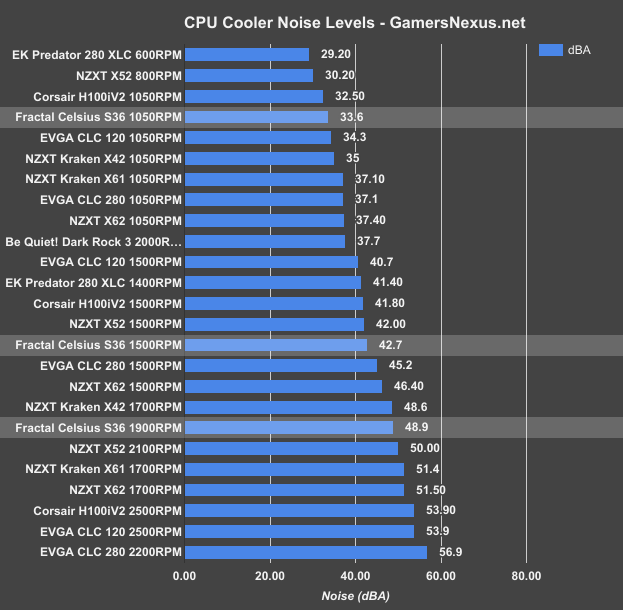 Once you’ve seen one Asetek Gen5 pump, you’ve really seen all of them. And we’ve seen multiple up-close (X42 tear-down, EVGA CLC tear-down). Performance isn’t going to be all that different between any of these if equalizing for fans. The real difference emerges from fans, and even that’s not much of a thermal game-changer. The 280mm CLCs tend to take top-ranks when maxed out on DC power to the fans, with Fractal’s 360mm solution rounding-out the middle of the pack. Fractal has some acoustics advantages at some specific RPMs, but to be fair, that can be said of almost all these coolers.

We’re left to differentiate between products by only two real factors when comparing Asetek products: Fan quality, which we did above, and “extras.” Fractal has a lot of those. 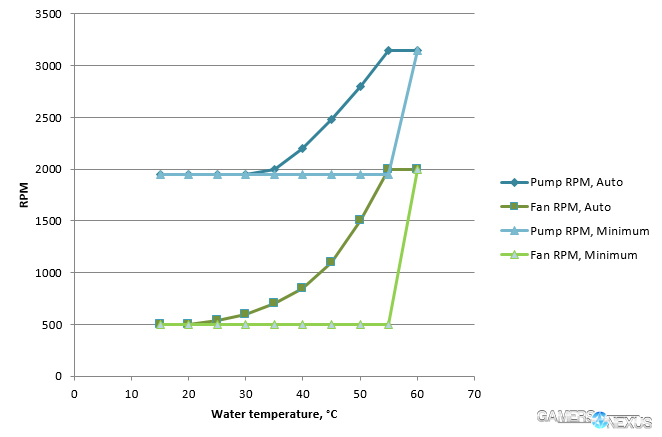 Above: Provided by Fractal to GamersNexus.

The mechanical action for the pump speed isn’t particularly reassuring; it doesn’t offer that haptic “click” each time, and it’s a completely impractical feature. This is something you do once, then never touch again – at least, not unless it’s an open bench. If we’re only setting a pump speed one time, it seems there’s probably a better solution: BIOS. Just set it there. Easy. There’s not much point in adding a one-time use mechanical switch. Further, because Fractal is basing off of liquid temperature, the pump will mostly stay at 2000RPM forever. Liquid temperatures almost never go above 29-30C on these Asetek coolers. We’ll give that it’s a unique idea, at least.

The fan hub is Fractal’s most defining feature, given the overall impracticality of its pump toggle. The idea is that this helps with cable management, something Fractal’s obviously keen on, given the internal cable routing within the tube sleeves. Unfortunately, regardless of configuration, we were unable to get the farthest fan to cleanly connect with the hub (and yes, we tried both sides of the radiator, both orientations of the fan). It can connect, but then you’re running a cable under or over the other fans. If going as far as adding cable management features, it doesn’t make sense to spoil them with unclean routing. An extra 0.25-0.5” cable length would solve this.

As for the G1/4” fittings, they’re also of mixed usefulness. The fittings are only on the radiator side of the cooler, with veneer fittings – fakes, basically – on the pump-side. It is not possible to fully replace the tube. People run open loops largely for looks. Very few people – although some certainly will – would actively seek a CLC that can be half-opened, but will be stuck with the original black, braided tubes. And those braided tubes do look nice – on a closed-loop cooler. It’s just doesn’t demonstrate a strong understanding of why open loops exist when we’re assuming the builder will mix tubes of various colors and designs. Ignoring that and looking at practicality, Fractal loses ground there, too; an EK solution, should you really seek some half-open/half-closed amalgam, would offer easier to use QDCs. Even then, if you’re going open loop, you might as well just do the whole thing. This is a closed-loop cooler. It might pretend to offer open-loop functionality, but that’s not its core focus. Besides, Fractal has “warranty void” stickers on the G1/4” fittings. We understand why they’re there, but from our perspective, you support a product for its advertised features. If customization for inclusion in other loops is a major selling point, you stand by that bullet on the box.

Regardless, the G-1/4” fittings are another instance of “good idea that’s not been thought through.”

EVGA fiercely competes at $120 with its CLC 280, Corsair is in the $140 range with the H115i, and NZXT holds the priciest bracket with the X62. Fractal, meanwhile, is stopping short of greatness each step of the way, and it’s going to mean someone else swoops in and develops on those strong foundations.