Why Does Kaby Lake-X Exist?

Getting into this thing, Intel’s answer to our query of why Kaby Lake-X exists was this: Kaby Lake X, Intel said, allows consumers to get into the Extreme Series platform at a lower price and use it as an entry-level. Someone could buy the i7-7740X ($350) or i5-7640X and then upgrade it later to one of the Skylake X CPUs.

We think this is a little misguided in its reasoning. Here’s the thing: If you’re spending $330 on a CPU anyway, and you’re spending just as much or more money on the motherboard, then there’s a problem if the ultimate goal is to replace the CPU later. Once you’re $600 into a build with just the board and CPU, you really might as well stop pretending and just go properly high-end or get a Z-series board. This isn’t even a mid-step – it’s high-end boards all the way down, and then this weird CPU that, on an HEDT platform, is considered low-end. Relative to the motherboard, that’s how it’d look. That’s especially true for the i5, which plainly shouldn’t exist. The i7-7740X also is of questionable existential worth, as we’ll show today.

More realistically, we think that Intel is trying to work toward merging its high-end enthusiast products. By 8th generation, we wouldn’t be surprised if we see the 7700K ($330) equivalent chips move permanently to X-class hardware, at least, if there’s not enough push-back.

But that answers why Intel thinks Kaby Lake-X exists, and of course shows that we don’t necessarily agree, if only because it’s confusing for end users.

Don’t look too hard. It’s the base frequency – the 7740X climbs to 4.3GHz from 4.2GHz, with boost at 4.5GHz on both. They’re still using a dual-channel memory controller, so only four DIMMs are usable on the board, and they’re still both limited to 16 PCIe lanes on the CPU itself.

The last major difference is the socket type changing, forcing potential 7740X users to spend more on X299 so that they can go on to use half of its features.

There’s one more big difference: the IGP is removed. An IGP on the i7 K-SKU CPUs has always been of questionable value, but it’s at least useful for troubleshooting. That’s about it. Here’s the thing, though – if it exists already on the 7700K silicon, which is clearly the same stuff used for the 7740X, there’s no reason to suddenly remove it. Besides, this counters Intel’s own argument. Their argument is that the 7740X is a CPU you buy to upgrade later. Well, if you’re already in the boat of being able to oddly afford an i7 and X299 board but not a Skylake X CPU, you might also be in the odd boat of using the IGP and upgrading the GPU later.

But you can’t do that here.

It’s not like we’re fans or users of the IGP, but if Intel is going to have it at all on the S-series i7s, we’d like them to be consistent with it.

X299: The Platform of Clarification 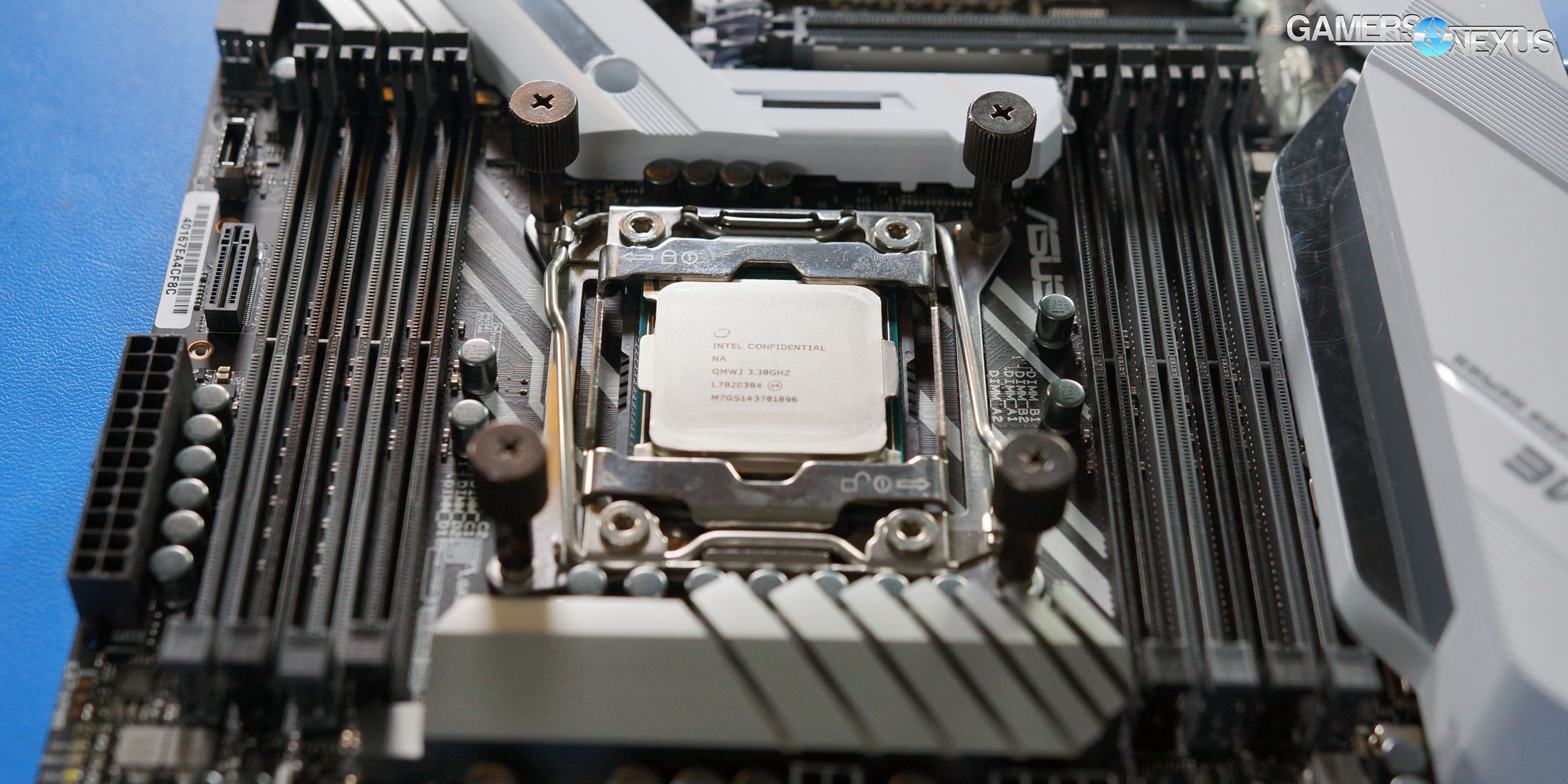 Because Intel is mixing what is effectively a K-SKU part with X-class HEDT parts, the platform gets confusing in its support. Half the DIMMs, for instance, cannot be used with the i7-7740X. Buying a motherboard with 8xDIMMs and installing an i5 or i7 KBL-X CPU will limit memory to two channels, which means four DIMMs.

PCIe lane limitations can also come into play, though the relevance of this hinges strongly on users with heavy IO use cases. The KBL-X CPUs still run x16 PCIe lanes directly, pushing the rest out via DMI and the PCH. This means that high drive-count configurations that lean on NVMe protocols or PCIe lanes will be limited sooner than Skylake-X.

If truly planning to upgrade from KBL-X to SKY-X, for some reason, it’d also be important to factor-in power consumption. SKY-X can push 1.8-1.9Vcore, whereas KBL-X draws closer to the 1.18-1.4 range (with OC & OV) of Kaby Lake. This means you’d want to be careful about power supply selection, as an overclocked SKY-X part will draw in the hundreds of watts. We have separate testing coming for that, though.

Regardless, let’s get into this review with thermals first, then gaming and synthetic tests.

Continue to the next page for CPU testing methodology.