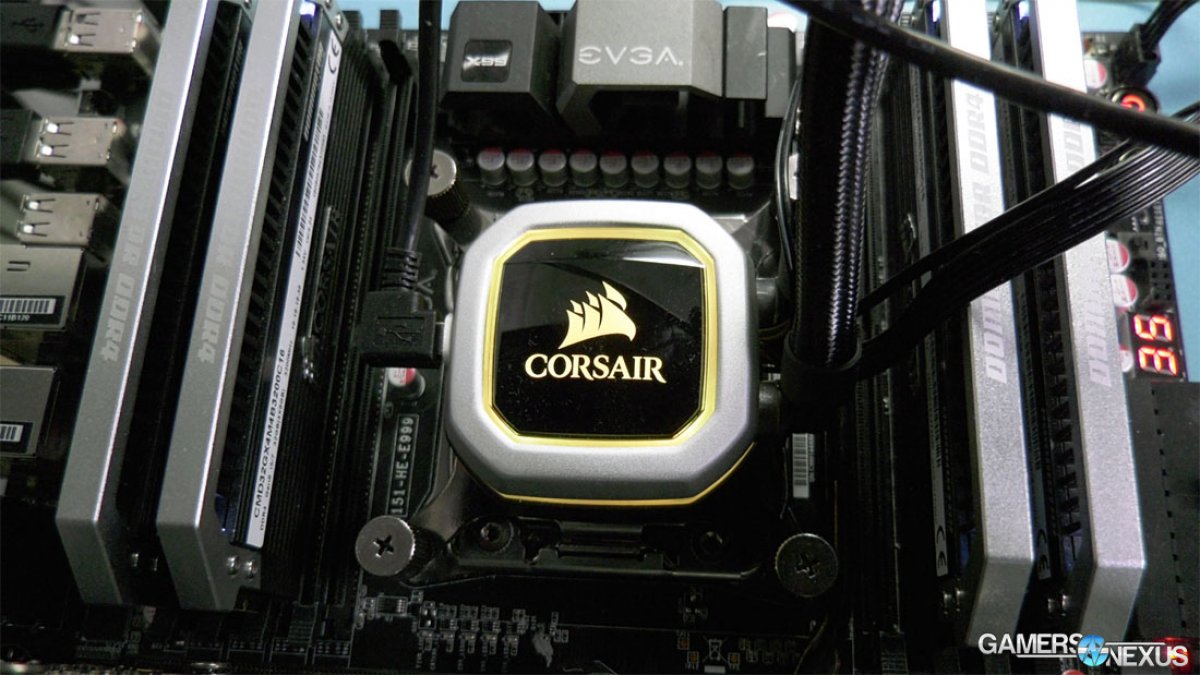 Corsair’s H115i Pro launched alongside the H150i Pro, the first two closed-loop liquid coolers to use the Asetek 6th-Gen pump. As we said in the H150i Pro review, Asetek didn’t do Corsair any favors, here – the new pump isn’t much different from the old one, and primarily focuses on RGB implementations akin to NZXT’s custom work on the XX2 series. Regardless, Corsair has taken this and used it as an opportunity to bundle their new CLCs with silence-focused fans, the ML120 Pro fans.

As shown in our tear-down of the 6th Gen Asetek pump, where we took apart the H150i Pro, the primary changes of the pump are endurance-focused, not performance-focused. Asetek is ultimately the supplier, here, and that means Corsair’s main contributions are restricted to fan choice; that said, Corsair did dictate large parts of the 6th Generation design. Asetek now includes an RGB LED kit for manufacturers, and also includes the PCB for programmable LEDs (something that NZXT previously went through great effort to customize on the 5th generation). The 6th Gen Corsair coldplate is also marginally smaller than the fifth generation, but other than that, it’s all endurance-driven. Asetek has changed its impeller to a metal option, similar to the old Dynatron impellers in the Antec 1250 Kuhler series. Asetek has also reportedly “optimized” their liquid paths to reduce hotspots that caused higher permeation than desired in older generations.

In terms of performance, though, our extensive testing results (and our contacts) all indicate that the 6th Generation is not an improvement in cooling. At best, they’re the same. And that’s at best. 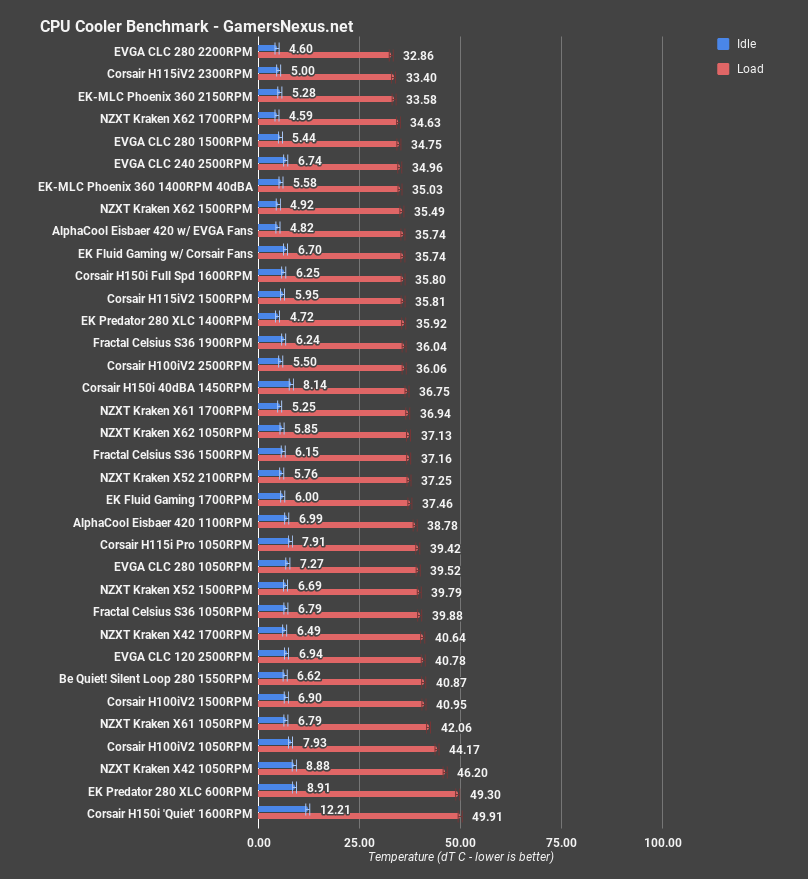 For standard flat-out thermal testing, the Corsair H115i Pro lands about 50-60% the way down our full chart. Remember, the H115i Pro focuses more on noise than thermals, so that focus will land it lower on the thermal testing charts. For flat-out speeds, the H115i Pro operates right around the EVGA CLC 280 at equivalent RPMs. At 39 degrees above ambient, the H115i Pro is operating at 37dBA, something we’ll discuss later, and lands just three degrees warmer than the 360mm H150i Pro at 40dBA.

Positioned versus the EVGA CLC 280, performance is similar at 1050RPM, but other factors enter play: EVGA’s CLC 280 costs about $140, the same as the H115i Pro, and takes a much different visual approach. EVGA’s fans can spin-up significantly faster as well, but will hit 57dBA when maxed – basically an unusable noise level.

Other competitors adjacent to the H115i Pro include the X42 140mm cooler at much higher fan speeds of 1700RPM, and higher noise levels, and the Eisbaer 420 at lower fan speeds and with its anemic fans and pump. 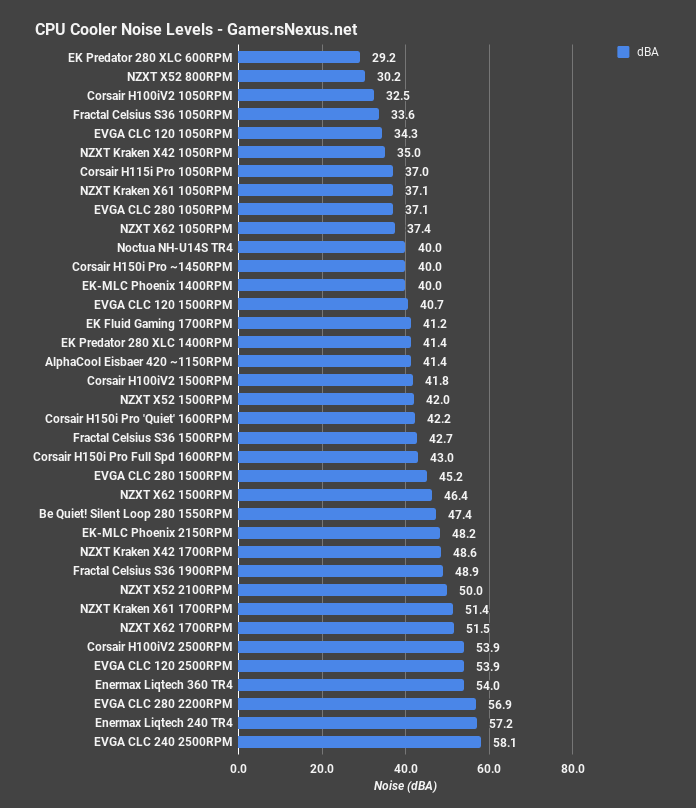 The Corsair H115i Pro is focused on silence, as was the Corsair H150i Pro that we reviewed previously – a 360mm variant. In terms of out-of-the-box acoustics, operating at 100% fan speeds, the Corsair H115i Pro lands at 37dBA for total system noise in our testing. This plants it within margin of error of the X61 at 1050RPM and CLC 280 at 1050RPM. The difference between these rankings is that, unlike EVGA and NZXT, Corsair is already at its maximum fan speed. The included fans spin at a lower RPM and focus efforts on lower-noise performance. Corsair does excellently here, and has managed to build a set of fans that operate at a competitive noise level with other 280mm closed-loop coolers. On this chart, barring the EK Predator that was manually tuned to the lowest RPM it could sustain, the H115i Pro is technically the quietest 280mm cooler. To be fair, though, it is within margin of error of others that have been manually tuned down to lower fan speeds.

We didn’t have the same highly audible pump whine as with the H150i Pro, but each cooler uses an Asetek 6th Gen pump. We’d imagine this is more to do with manufacturing tolerances and variance than anything. 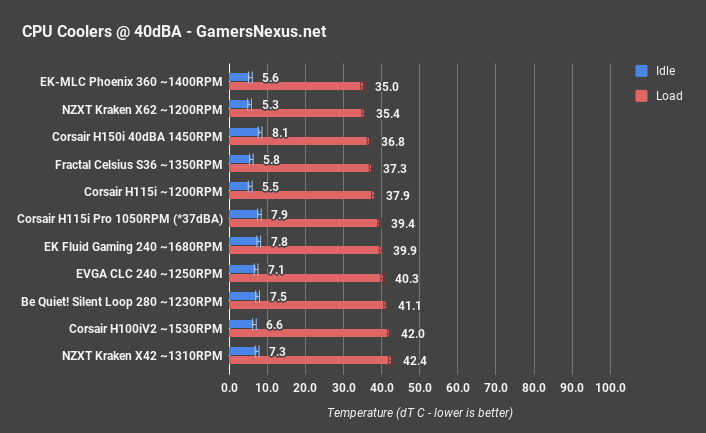 Noise normalization doesn’t really work here like it normally does. In order to hit 40dBA, we’d have to use louder and faster fans on the H115i Pro. Typically, this test is a 40dBA stock fan test. Corsair operates below that natively. We’ll keep this in mind for future noise normalization benchmarks, and might do an additional lower dBA noise test.

Regardless, just for perspective, the H115i Pro at 37dBA – a 3dBA difference, and therefore entering noticeable territory – lands between the EK Fluid Gaming 240 and H115i original unit.

Here are some quick price checks on nearby alternatives:

Ultimately, Corsair’s H115i Pro is OK. It’s fine. If you have the H115, there’s no reason to upgrade, really. The only stand-out performer among the H115i Pro tests would be the fan, where Corsair’s selection has enabled the H115i Pro to operate among the quietest 280mm coolers – especially while still retaining any meaningful level of performance. The H115i Pro does well to optimize and min-max its fan choice versus Asetek’s new pump, which we already indicated didn’t do much in terms of performance benefit. The fans are quiet and still move a lot of air. Job well done on that front.

Of course, the counter-argument is that you could always just quiet-down competing fans to the same or similar RPMs. In that case, for anyone willing to do some tuning (and who doesn’t require peak noise-thermal ratios out-of-box), it’s absolutely worth considering the EVGA CLC at its presently discounted price of $113. Typically, all these 280mm coolers are about the same price, though. If that’s true when you’re checking prices, pick based on these items: (1) Out-of-box silence versus tunable silence, (2) looks and LEDs.

That really is what it comes down to, these days.