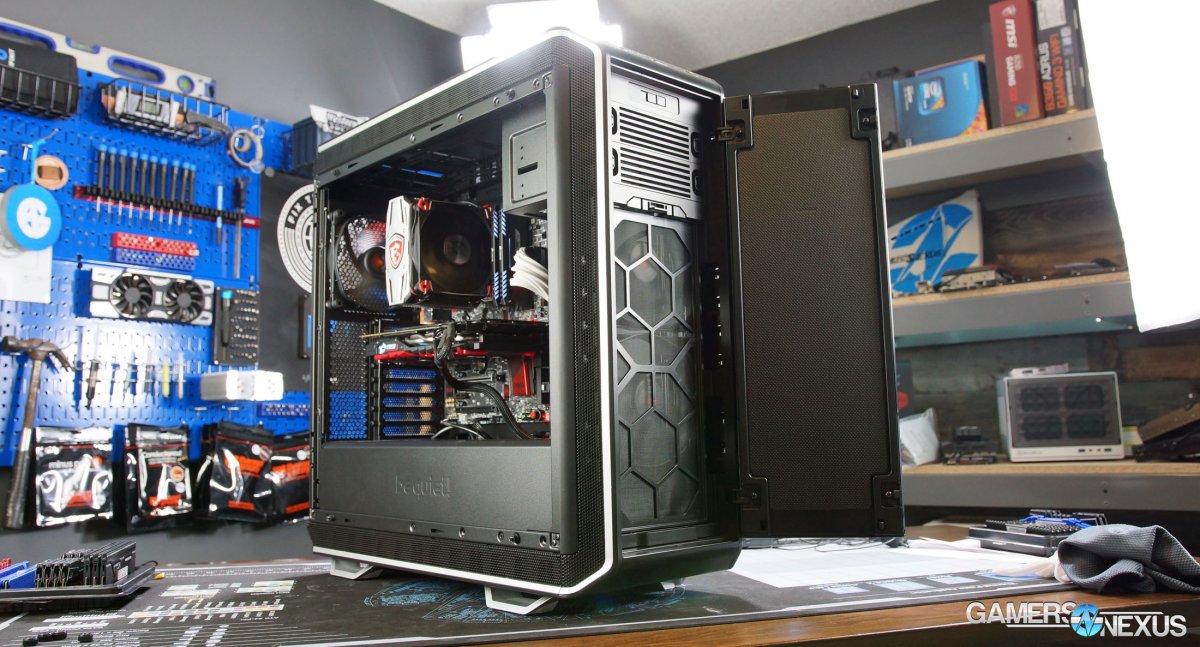 The Dark Base Pro 900 Rev 2 is, as the name implies, a minor revision of the Be Quiet Dark Base Pro 900 that we already reviewed way back in the blue mat era.The major difference is the addition of a power supply shroud, similar to the one in the Dark Base 700 that we also reviewed, but there are also some other minor changes. Since the rest of the case is the same, we’re replacing our usual build and appearances section with a quick rundown of the updates we noticed.

This review of the Be Quiet! Dark Base Pro 900 Rev 2 compares performance, build quality, and differences with the first version. We also test versus several other leading cases, including other full-towers or large PC tower cases.

Might as well start with the changes. For full build notes and the quality/ease-of-installation review, check our original DBP 900 review.

Owners of the original DBP 900 that want these upgrades can buy them separately from Be Quiet. From their design doc: “The new PSU shroud and HDD slot covers will be available for customers using the first Dark Base Pro 900 version. The windowed side panel and additional HDD cages will be offered separately as well.”

The primary comparison for the Dark Base Pro 900 Rev 2 is obviously the Rev 1. The Rev 2 has faster fans and a controller that works a little differently, so results between the two cases should be different, but the amount of improvement seen from (for example) opening the front panel would be approximately the same. Check our previous review to see temperature deltas from other scenarios like opening the front panel, opening the side panel vent, taping the mesh trim shut, and inverting the layout. 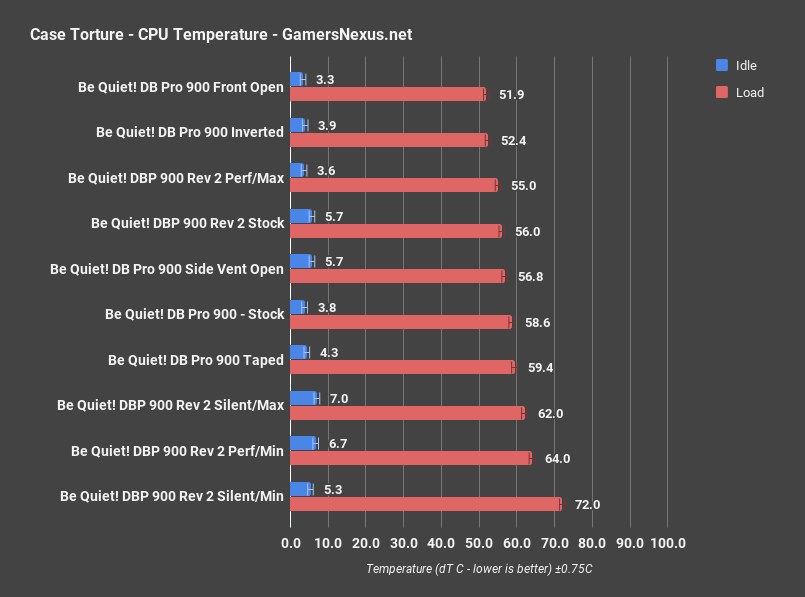 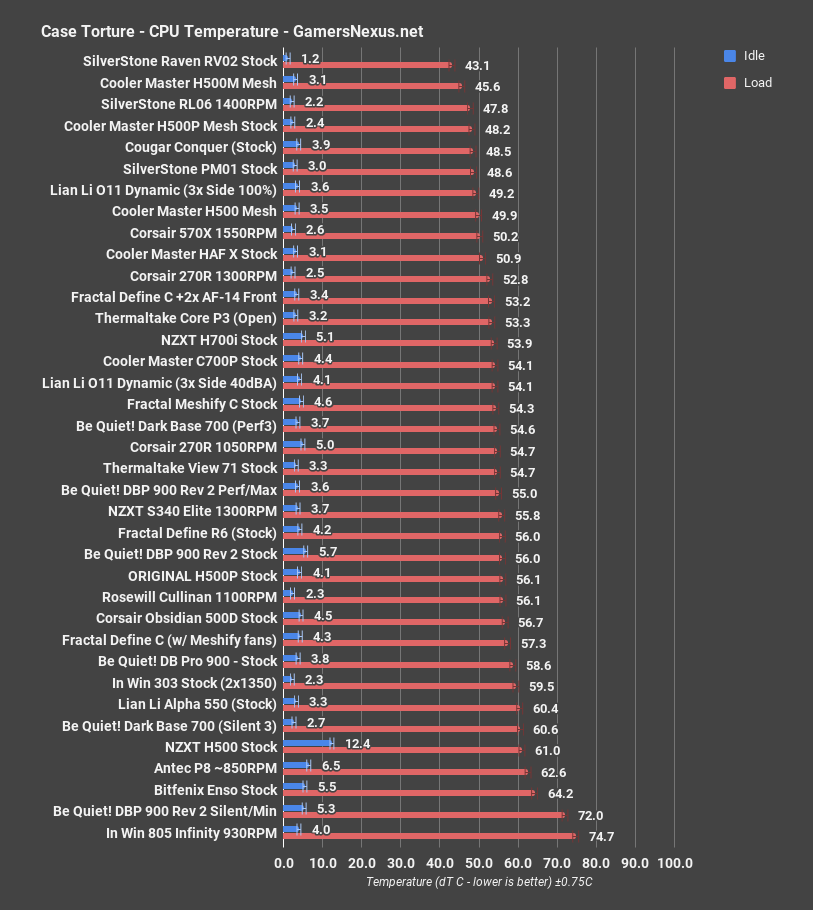 The original stock DBP 900 reached 58.6C dT, towards the warm end of our scale. With its  higher fan speeds, the Rev 2 places more towards the middle with the Define R6 and S340 Elite. For how closed-off the front panel is, that’s fairly good. 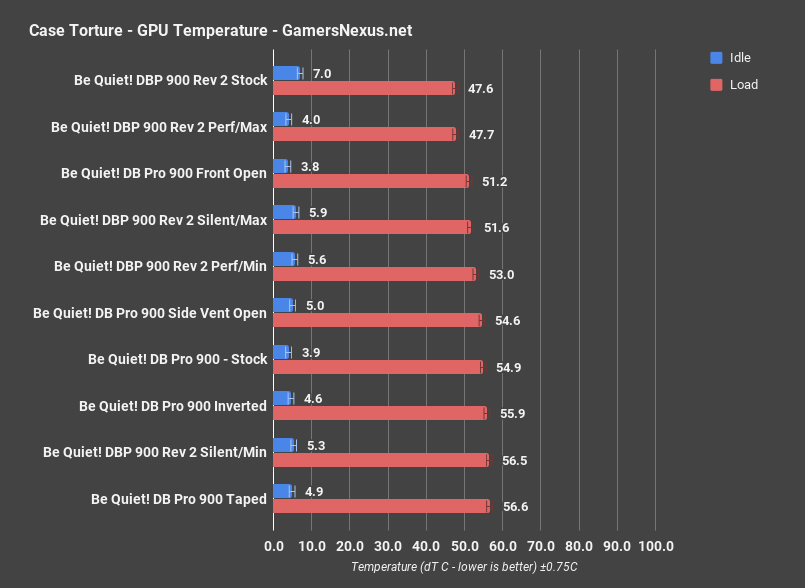 GPU dT averaged 47.6C during the torture test with Furmark, and almost exactly the same using the controller at max speed and performance mode. The best to worst order of performance is the same as for CPU temperatures: perf/max, silent/max, per/min, silent/min. The range of temperatures was smaller, however, and even the silent/min average dT was only 56.5C. 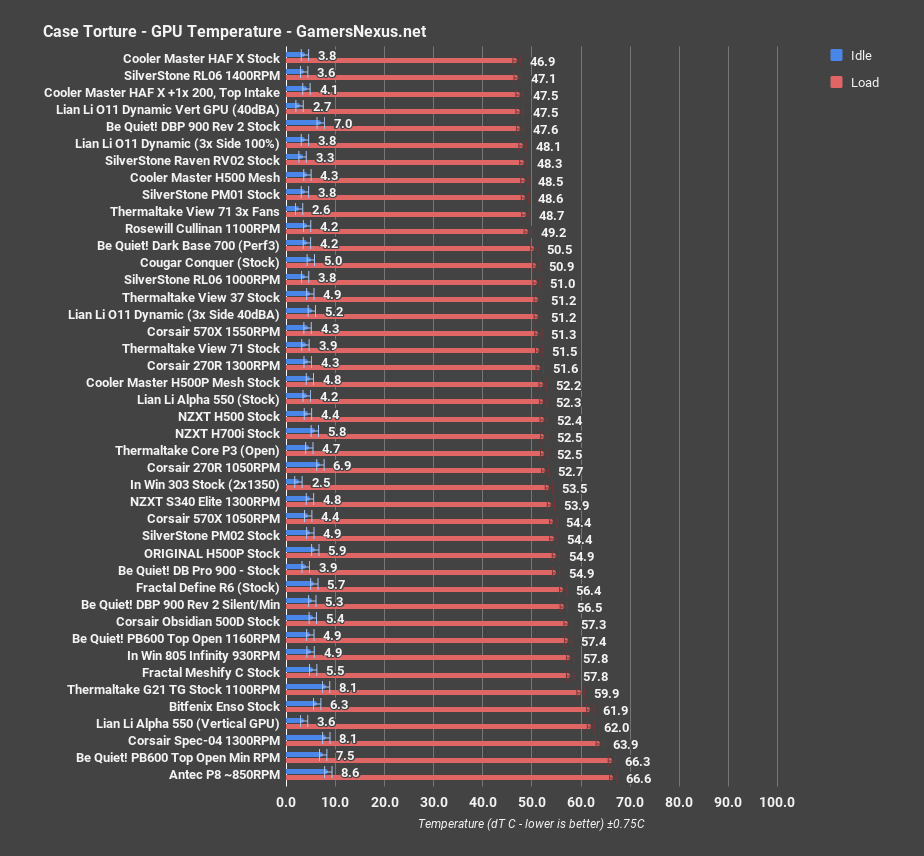 It was a surprise how well the Rev 2 provided GPU cooling, especially since it added a PSU shroud to the case that could potentially restrict some airflow. A small part of this could be that we intentionally flipped the PSU over when reviewing the original because of restrictive ventilation on the bottom of the case, which may have caused the PSU to compete with the GPU for air. More importantly, there’s the higher RPM fans and the lack of preinstalled HDD bays to block the airflow path from the front of the case. Whatever the reasons, the Rev 2 has some of the coolest GPU temperatures we’ve logged, well below the original’s average of 54.9C dT. 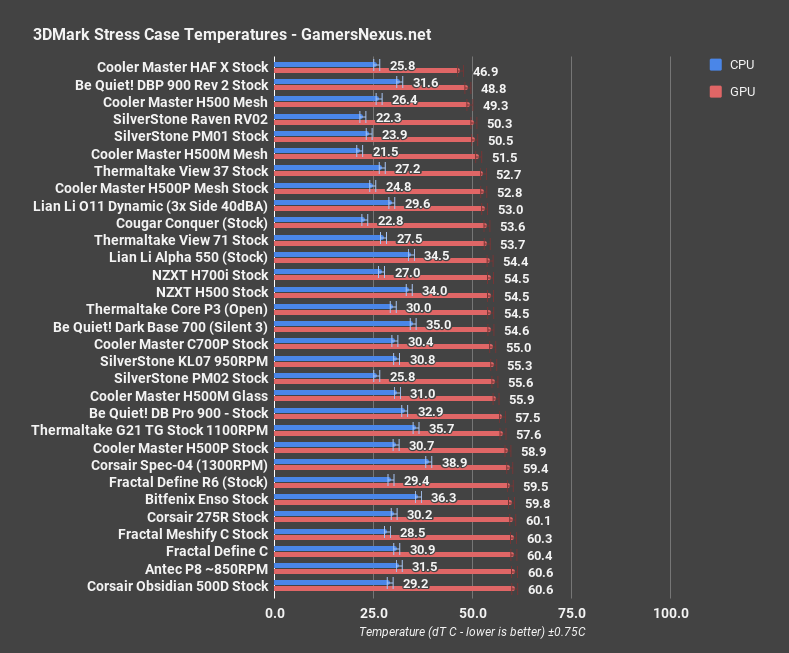 GPU temperatures were just slightly higher in the 3DMark stress test than in the torture test, averaging 48.8C dT. That’s even farther below the original DBP 900’s average of 57.5C dT, and impressively far below most other cases on our chart as well. GPU cooling is genuinely good in the Rev 2, something we wouldn’t have expected from a noise dampened case. 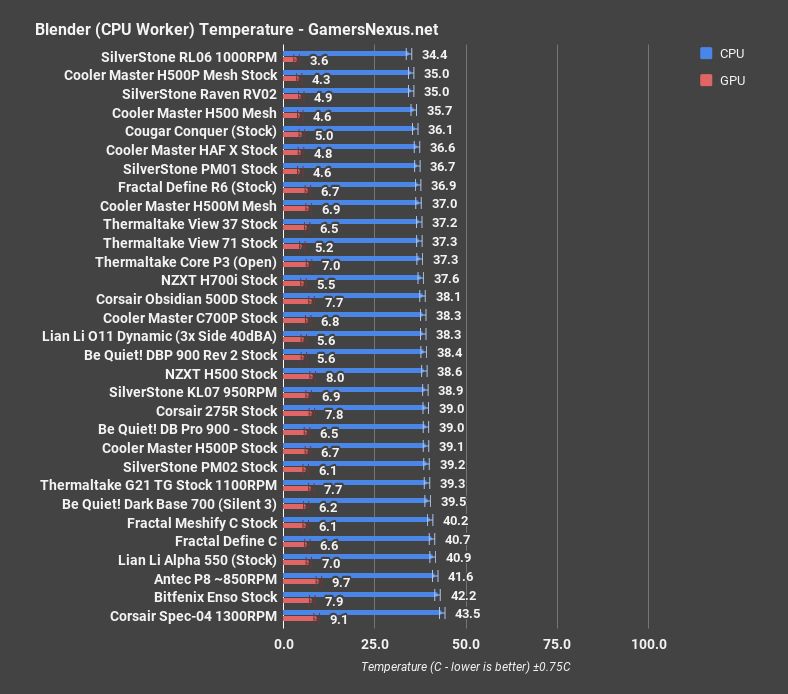 Rendering on the CPU, CPU dT was 38.4C in the blender test. That’s fairly average, and below but within margin of error of the original DBP 900. 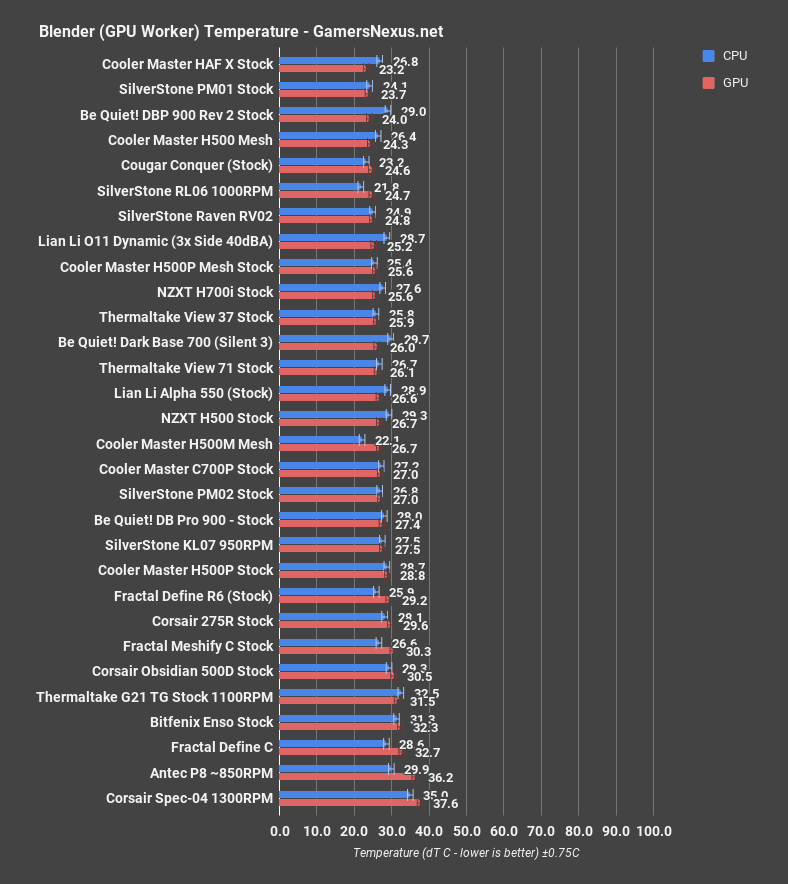 When utilizing the GPU, GPU dT during the render was 24C, beaten by the PM01 and HAF X but cooler than everything else. 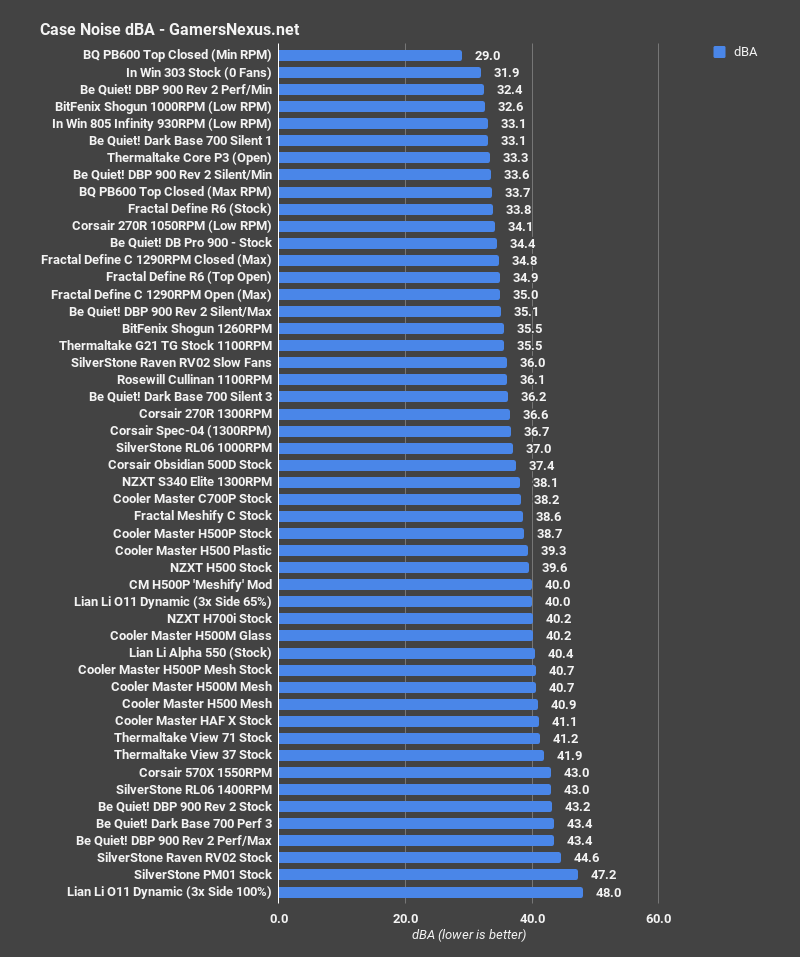 Even with all of Be Quiet’s noise damping, running the fans at full 1600RPM reached 43.2-43.4dBA, as loud as Dark Base 700 was at max speed, or the Silverstone RL06. The quietest level we achieved using the fan controller was 32.4dBA, only slightly above the In Win 303 with no fans in it.

The second revision of the Dark Base Pro 900 boils down to a power supply shroud and nicer fans. If this was presented as a minor update without increasing the price, like the changes Cooler Master made to the H500P, it would make sense. The original DBP 900 that we reviewed was great and earned our Editor’s Choice and Quality Build awards, and we let the price slide because it’s clearly a luxury item. Still, $250 was a lot of money, and Be Quiet is asking $20 more for a near-identical case.

In performance, the Rev 2 has much better GPU cooling results than the Rev 1, but that’s because the Rev 2 has faster fans. 140mm Silentwings 3 fans sell for more than $20 apiece on Newegg, so upgrading an original DBP 900 to match the Rev 2’s performance is an expensive proposition. Cooling performance  is the single best argument for purchasing the newer revision instead of the older, but it only applies if the fans are run above 1000RPM, which silence-focused Be Quiet customers may never do.

The Rev 2 is a better-performing case with a few more features than its predecessor, which we already liked. If all that together is worth $20 and making PSU installation even more annoying than it was, we like the rev 2 as well.