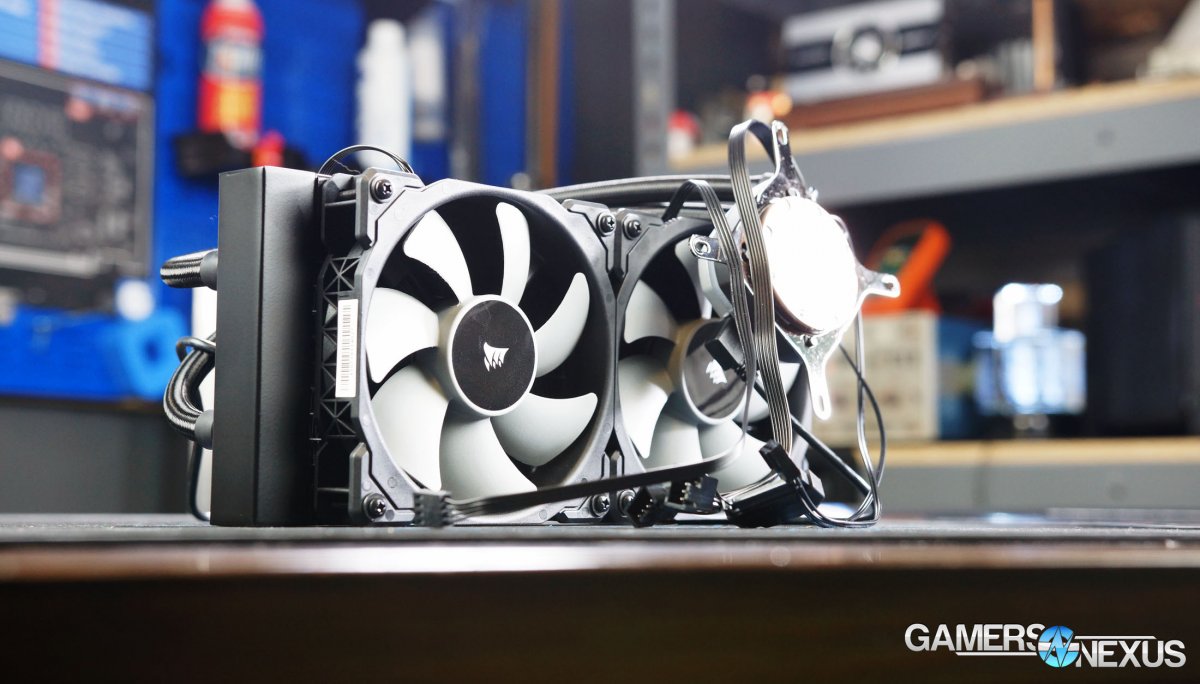 Corsair’s H100i Pro is the third Corsair product to use Asetek’s 6th Generation pump solution. Asetek didn’t push performance in significant ways with 6th Gen, but instead focused on endurance improvement and reducing hotspots that encourage permeation of the tubes. This time, just to keep things sort of interesting, we’ll talk about how pump speed impacts the performance of this particular cooler – a topic we’ve explored with Gen5 coolers in the past.

We originally detailed Gen6 in this H150i Pro review, if you’re a bit behind. On the whole, Asetek’s sixth generation pump isn’t all that different from its Gen5 pumps. Performance is marginally worse, if anything, as almost all changes were focused on slimming down the CPU block and improving endurance. Asetek looked at key hotspots in its Gen5 pumps and rerouted flow to reduce strain and failure potential. Liquid should still remain below 60C at all times, but Gen6 will now better enable this than Gen5. Don’t expect better performance, though. Despite improving the impeller quality significantly, overall performance remains unchanged at best, if not slightly worse.

Corsair had a heavy hand in dictating the advancement of the Gen6 pumps and coolers, and was an exclusive first-party launch partner. The Corsair Gen6 coolers have slightly smaller coldplates than their predecessors, impacting thermal performance in small margins on X99/X299 chips, and have otherwise primarily added more RGB LED capabilities.

Price is higher than the preceding H100i V2, which is still on the market for a reasonable price. At about $20 more, landing at $120, the H100i Pro is a tough sell and competes with some best-in-class, cheaper coolers. This includes products from Corsair’s own catalogue, which manage to remain lower in price and overall more accessible, and EVGA’s CLC 280 Gen5 cooler.

As for differences between the H100i V2 and H100i Pro, those boil-down to the pump – it’s Gen5 on the H100i V2, Gen6 on the H100i Pro. Again, these differences do not include performance uplift when moving to Gen6. It’s basically more LEDs, a slimmed package, and theoretically more endurance – but we won’t know if that’s true for a few years yet.

The differences between the H100i V2 and H100i (V1 implied), if you’re curious, are entirely relegated to intellectual property arrangements with the radiator. The radiator is the primary change between them. 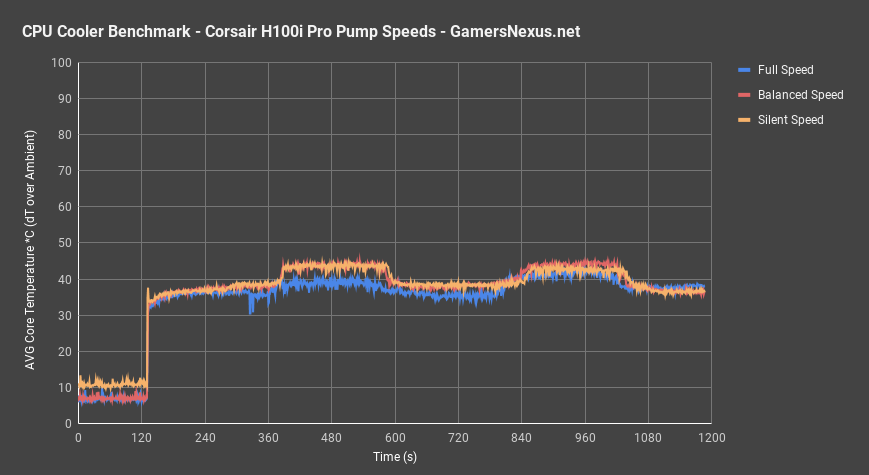 The best way to look at pump speed impact on thermals is to plot a chart over time, rather than using our steady state charts. Plotted against time, the full speed and balanced speed pump settings equate one another when idle, generally at around 6-8 degrees Celsius delta T over ambient, whereas the silent speed pump sits closer to 10-11 degrees over ambient.

As the workload ramps and cools, part of our test of how well coolers can soak thermal changes, we see the balanced and silent pump speeds performing roughly equally, +/- 1 degree of each other. The full speed test is consistently cooler, at times by as much as 4-5 degrees. This is the entirety of the difference. Generally speaking, these fans at 100% speed are moving fast enough to deal with the heat without needing much extra help from the pump. There is a difference, but it tends to be in heaviest load periods and only on order of 4-5 degrees. The pump itself is inaudible over the fans in this configuration, but a particularly whiny pump – which sometimes happens in normal manufacturing variance – might have audible higher frequency noises. If that’s the case, dropping to balanced speed will help minimize these noises, but won’t give up a ton of performance. 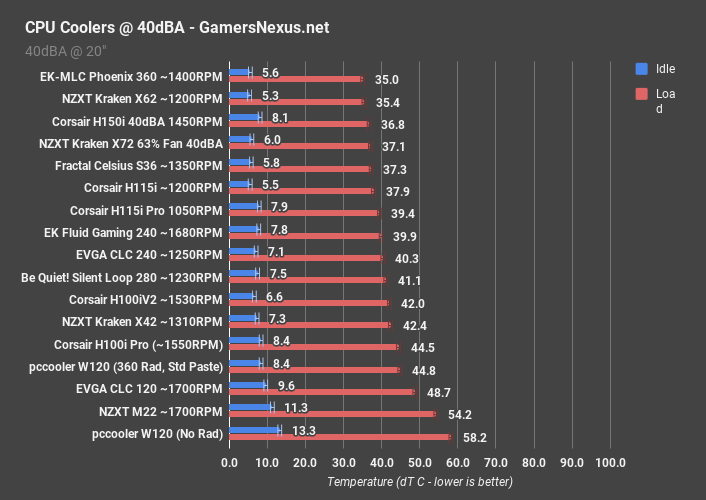 Noise normalized testing helps us evaluate overall cooling efficiency, done by comparing coolers with fixed fan speeds to equate 40dBA of noise output. At a matched noise level, we can then compare the fan quality and pump quality, eliminating chart-toppers that win just by brute-forcing 50dBA of noise. One note: This doesn’t test the type of noise, so we won’t be able to see the pitch produced by the fans, but we can at least see how loud it is.

The Corsair H100i Pro at 40dBA required roughly 1550RPM fan speeds for total system noise, landing the cooler right around where the previous Corsair H100i V2 performed. The H100i V2 is near enough to the H100i Pro that we’re bordering margin of error, but just outside of it; as we found previously, the new Asetek Gen 6 pump is slightly anemic when compared to the Gen 5 pump, and that manifests itself in marginal performance loss. Theoretically, this is matched with endurance improvements, but that will require years of user experience to really prove.

The EVGA CLC 240 is a bit cooler at 40dBA, somewhat within the differences of Gen5 and Gen6 when combined with other variance and fan differences. The H100i Pro isn’t doing anything particularly impressive in this benchmark, but also isn’t awful. It’s just “fine,” and that’s about it. The cooler isn’t offensive in its performance. 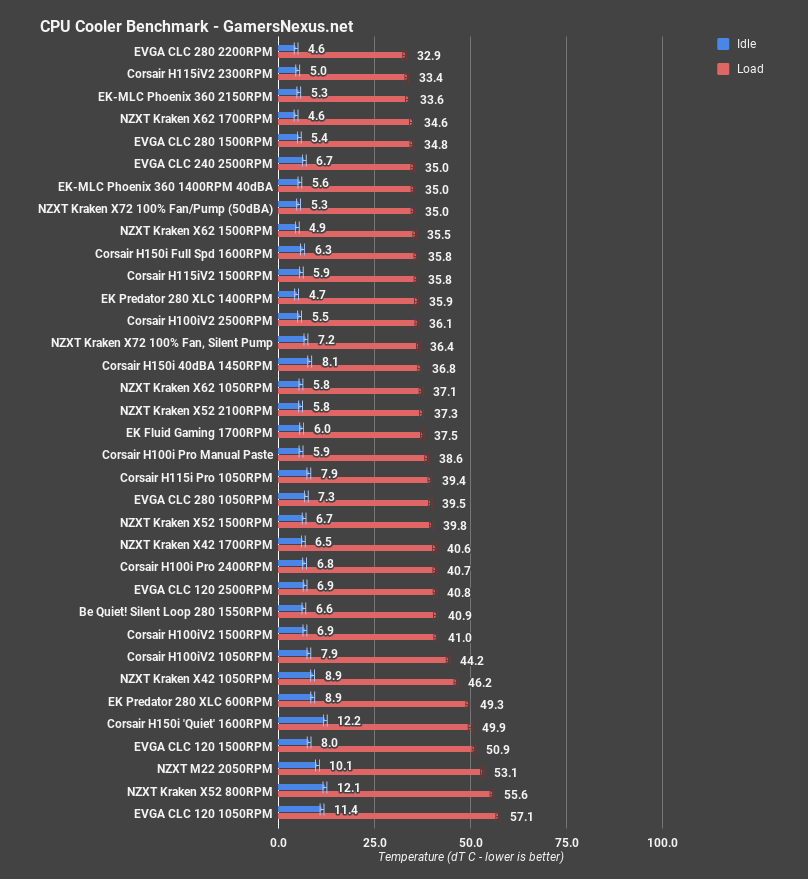 Flat-out thermal testing places the H100i Pro fairly far down the charts when left with the stock paste application. By default, Asetek’s compound is well-applied, but doesn’t cover the entire IHS or coldplate. This reduces thermal performance, particularly on large heatspreaders that are found on X99 or X299 CPUs. Completely stock but at full fan and pump speeds, the H100i Pro performs at around 41 degrees over ambient, placing it near the X42 140mm cooler after applying paste manually. As always, we manually apply a layer of paste across the entire IHS for our tests, unless otherwise stated, and that’s where our performance delta comes in. The difference is that we wanted to demonstrate stock vs. manual application for this round.

Stock, the cooler puts us closer to 38 degrees, which is just shy of the original H100iV2. Some of this is test variance, and we aren’t that far out of range for error margins, while the rest is attributable to fan RPMs that are 100RPM slower on this particular unit, with some reduction in performance also attributable to Asetek’s pump. 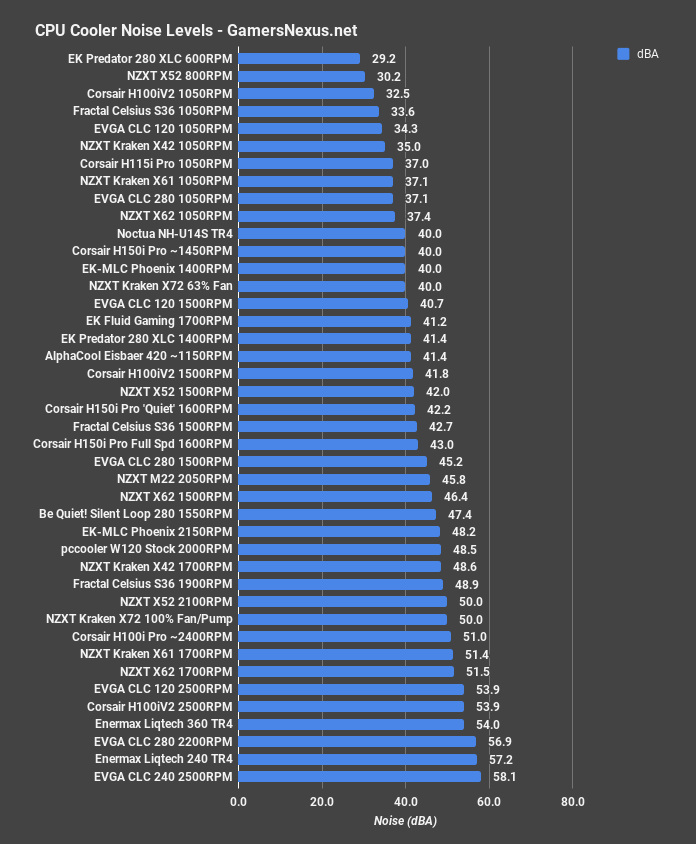 In terms of flat-out performance noise levels, our H100i Pro landed at around 2400RPM for its peak fan noise. As usual, there can be about 10% variance in RPM from fan-to-fan. These speeds had it slightly slower than the H100i V2, resulting in a proportional reduction in noise levels. The H100iV2 operated a 54dBA output at max fan RPMs, with the H100i Pro at about 51dBA. This has it comparable to the Kraken X72 at full speeds, which is a 3-fan cooler, and similar to some maxed-out 280mm coolers. As usual, you may adjust the fan speeds down to better fit a balance of noise and performance.

$120 is a tough sell. Corsair’s own H100i V2 is cheaper (at time of writing), the EVGA CLC 280 is more efficient in noise-to-thermals and also generally lower price, and Corsair’s H115i is similar in price to the H100i Pro.

The H100i Pro is a fine cooler. On a technical level, there’s nothing really wrong with Corsair’s new H100i Pro. It’s fine. It’s not impressive, it’s not disappointing, and it’ll be a good buy once its price falls by about $20. At present, unless you really want those new RGB LED features or the zero-RPM fans (which can be achieved through other means), it’s just hard to justify over-spending when given the better value offered by nearby competing products. Corsair’s own products fall into that list, by the way, so you could even stay within the brand – the H100i V2 and H115i are similar or superior performers, and neither carries the “Pro” tax.

We think the H100i Pro will find its place once it falls by about $20.