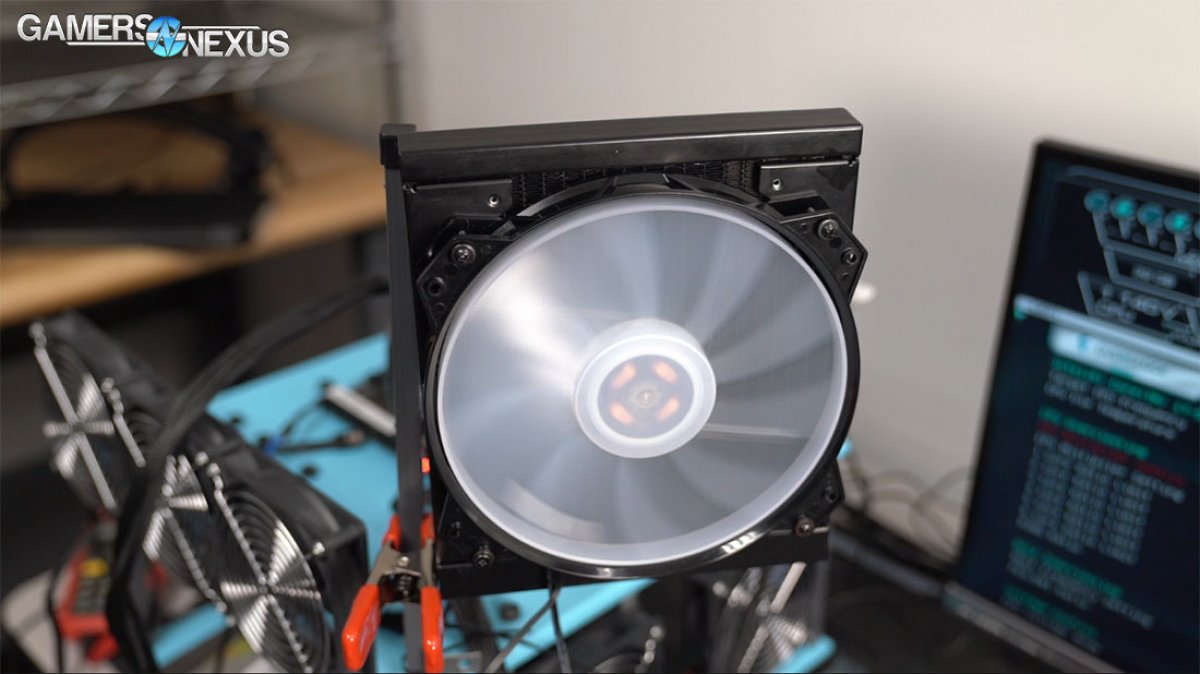 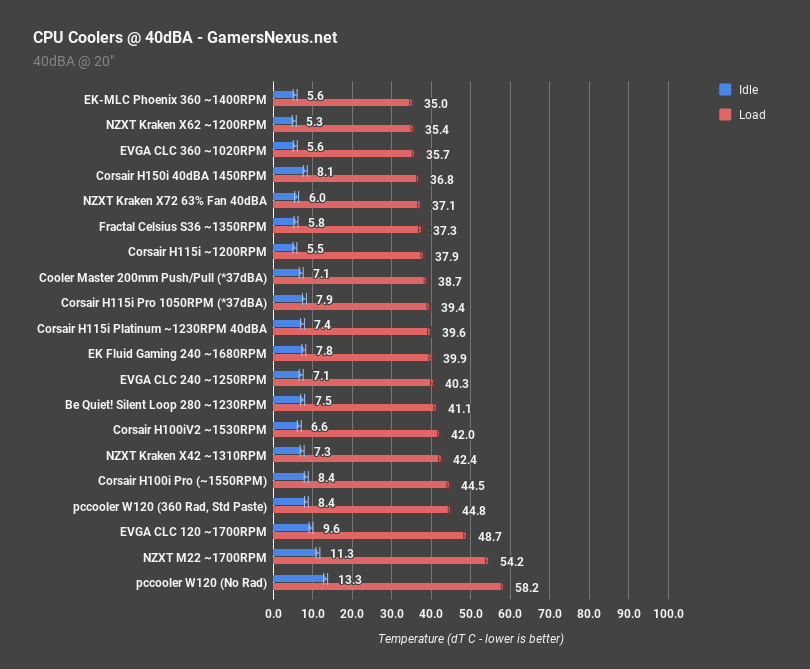 We’ll start with noise normalized testing. As always, this is important for helping us establish cooler efficiency from one to the next, as best flat-out thermal performance will always be awarded to the fastest and noisiest cooler. Users don’t typically run fans full-bore when they’re 60dBA, like the EVGA CLC 360 is at full speed, and so we normalize thermals at 40dBA on all coolers for testing at a more reasonable noise level. This controls a variable such that the coolers are more directly comparable.

The downside is that we chose 40dBA for coolers based on smaller fan designs, which typically spin faster and louder. We made the cut-off thinking that 200mm-based coolers would never really be a thing, or at least that we’d figure it out when we got to it. Because 200mm fans are so quiet on average – we can show a previous chart of our 200mm Noctua vs. Cooler Master review – we can’t get the Cooler Master 200mm CLC up to 40dBA. We did get it close-ish, to 37.4dBA or so, by mounting two CM fans to it in a push-pull configuration.

Anyway, with this obvious disadvantage of only getting to 37dBA of the 40dBA target for noise-normalized thermals, the CM 200mm CLC still ended up at about 38.7 degrees Celsius delta T over ambient, which puts it at roughly the same level as the Corsair H115i Pro with its similarly noise-limited fans. The H115i Pro didn’t have good fans on it to start and focused more on noise, which ended up landing it lower on this chart. 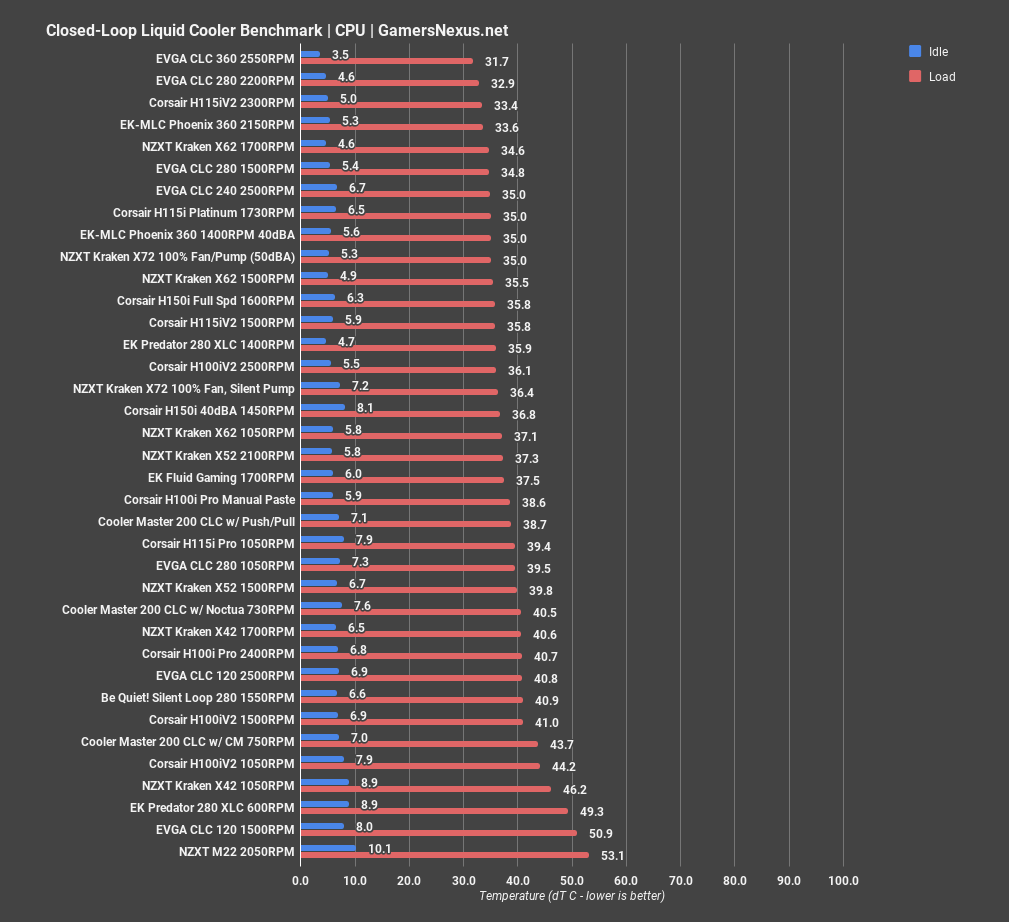 For flat-out thermal results at full speed, the Cooler Master 200mm CLC landed at 40.5 degrees Celsius delta T over ambient when using the Noctua fan, or 43.7 degrees when using the Cooler Master MF-200R. Even splitting the difference, that puts the 200mm CLC at around the performance of EVGA’s 120mm CLC at 2500RPM – which is deafening at 53.9dBA, as compared to the Noctua and CM fan range of about 33dBA to 35dBA – and not distant from the 240mm X52 at a medium fan speed. The Kraken X42 140mm CLC with the fan speed maxed, which runs 48.6dBA, ends up adjacent to the CM 200 CLC with Noctua’s fan, both at about 40.5-40.6 degrees over ambient, yet the Noctua/CM combination runs closer to 33dBA. That’s a massive noise level reduction – over two times the perceived noise to the human ear, not the same as acoustic power – and is noticeable in use. On one hand, a 200mm radiator is producing the same performance as a 140mm pump-and-radiator, but the fan makes all the difference and the noise levels are much lower.

As for push-pull performance, it’s typically not worth running coolers in push-pull because value dips, but the CM cooler ends up at around H100i Pro performance when Corsair’s 240mm CLC is at full speed and uses manual paste. Also in range of the 38.7-degree result is the Kraken X52 at full speed, another 240mm cooler, at 37.3 degrees over ambient. Not bad for the Cooler Master unit, all things considered. It’s still not practical except in a few cases – especially because of the short tube length – but it’s amusingly competitive with 240mm CLCs in raw thermals. 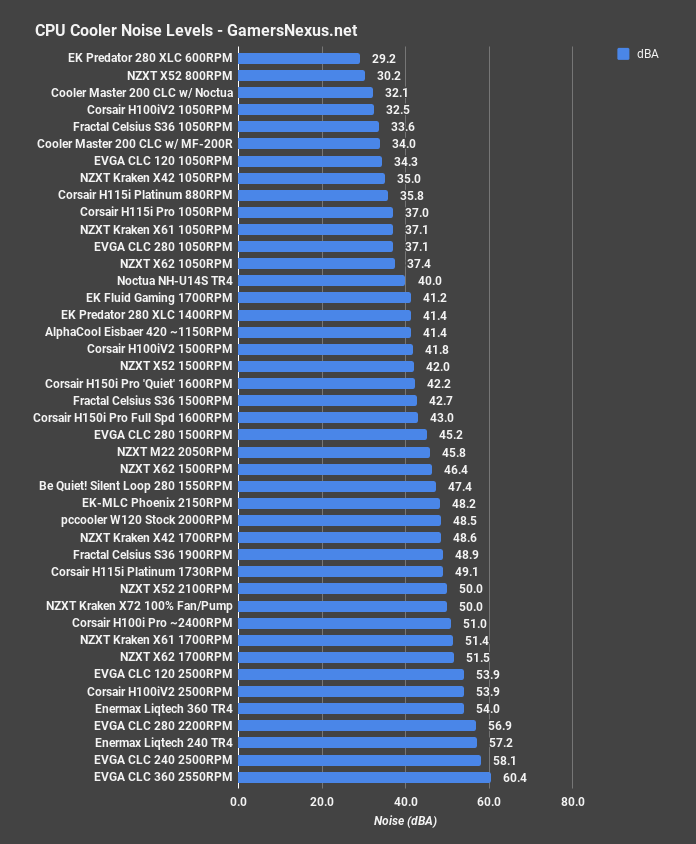 Noise levels will depend on the fan chosen for this one. If running with the H100 stock fan – the MF-200R – the cooler ends up at roughly 34dBA when measured at a 20” distance. That puts it around the same noise level as other coolers when their fan RPMs are cut down significantly, like the EVGA CLC 120 at less than half its full fan speed, or the Corsair H100iV2 at just 1050RPM.

Above is from our 2017 Noctua fan review

As a point of reference, we previously tested the linear feet per minute flow of the Noctua 200mm fan and CM RGB 200mm fan, as tested through a mesh case panel. We won’t go through all of that testing methodology again here – there’s a separate piece on that you can watch or read, linked below – but the recap is that the Noctua fan always pushed more air than the Cooler Master fan, and the two have roughly the same fan speed curve, so this is a 1:1 comparison. It’s not always significant, but 423.5FPM flow versus 378 starts to stack-up at the max RPM of each fan, which is why we saw those differences we did. Interestingly, in our previous testing with these fans, we did not measure a thermal performance uplift as a result of switching to Noctua from the Cooler Master fans. That’s because we tested them in a case last time, since 200mm radiators didn’t exist, and so we ultimately became bound by the limitations of the chassis. Going forward, if we wanted to test 200mm fans specifically, this radiator seems like a perfect fit for it and would better illustrate differences, though those don’t necessarily extrapolate to equivalence in cases, as we’ve learned. We also had a previous result with the two fans noise-normalized through the panel, where we saw Noctua’s 200mm fan and its higher static pressure performance benefited the results, always landing ahead at 34.5dBA, 33dBA, and 31dBA normalized through the panel testing we did in 2017.

The Cooler Master 200mm closed-loop liquid cooler came out a lot better than we expected. 200mm fans are weak in static pressure performance at point of manufacture, and there’s not much that can be done about it. Most of these fans are built to spin slowly, quietly, and move a high volume of air through a big hole. They’re not built to push through small mesh or dense fins, but this cooler manages fine overall. It’s not better than a standard 240-280mm CLC, on average, for use in a “normal” case, but it fulfills a unique use case and is actually meaningfully competitive in so doing. Again, this really is a solution to a problem that Cooler Master sort of created – typically, 200mm fans would have to be stripped if using a CLC, as the stock 120/140 fans and radiator size wouldn’t line-up with the pre-installed 200mm fans. In this instance, the user can leave the stock 200mm fan (likely the reason for buying the case, if larger) and instead rely on a 200mm radiator. It’s not perfect in any way, and it’s not the most efficient with its static pressure limitations, but did much better than we thought for a radiator with 200mm, slow, quiet fans. Not bad overall and very unique, which makes it fun.