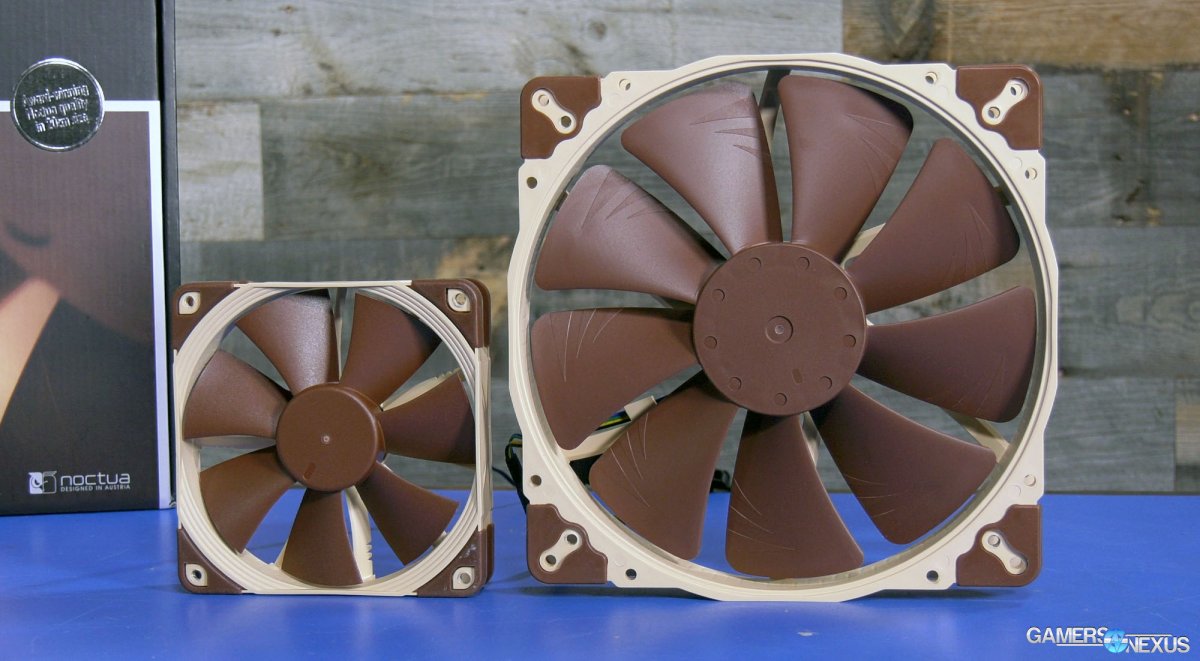 Why 200mm Fans Came About, and Why They Died

Before digging into the review, it’ll help to have some context: 200mm fans arrived with force, but vanished shortly thereafter. To better understand when and if 200mm fans make sense, we must review why they ever arrived, and then why they died:

The Noctua NF-A20 fan costs $30 right now, and the MasterFan isn’t available separately yet – but probably will be. The Cooler Master unit is presently only available in the H500P. Based on other MasterFan RGB prices, we’d expect the MF200R to ship somewhere within the $30-$40 range, but we’re not positive. Either way, its most likely competition is Noctua, and the two have very different looks; in fact, one clearly focuses most its energy on visuals, while the other takes the usual function-focused approach. They fill different markets, then, so the actual cooling efficacy becomes less relevant as we shift our needs away from function and toward looks. In this regard, if RGB LEDs are desired, Noctua is obviously incapable of filling the job. If function is preferred, we’ll have to see how Noctua holds up.

We used similar test methodology to our Noctua China-made vs. Taiwan-made fan testing, found here. We are focusing on our efforts on anemometer hotwire testing and noise testing, with PWM-to-RPM response also tested. Thermals, although present, are less significant. If we know the airflow (presented in linear feet per minute, or LPM), we can deduce everything else. Thermals introduce a lot of variables and are difficult to control for, so our focus is on airflow and noise, as they are most easily tested, and then thermals in the H500P.

That’s the other thing: When the thermals do show up, they are in the Cooler Master H500P Mesh mod that we did. Airflow is complicated, and performance may vary as you change cases (or remove the mod, for instance), but there just aren’t many common deployments for 200mm fans, and the H500P seems like the obvious one. In the very least, we can use our LPM testing to determine theoretical performance deltas in various case installations.

LPM testing is done by taking a high-end anemometer and hotwire (+/-2% accuracy), then mounting it about half-way between the outer edge of the blade and the hub, which is where the most airflow is measured. We’re mounting the fan to a Rosewill Throne side panel, which has a large, ventilated, metal mesh wiring to accommodate 200mm fans. The Throne has enough holes to accommodate both form factors we’re reviewing today, simplifying the process greatly. Mounting the fan to the panel is done with four screws, each mounted to the same torque. The side panel acts as a real-world use case: If you’re installing a 200mm fan, it’s probably up against a mesh of some kind, and will almost certainly not be used in open/free air. This means that we can test some of the static pressure capabilities of the fans, as 200mm units are traditionally challenged on that front.

The hotwire is secured on the receiving side (intake) of the mesh, while the fan is on the opposing side of the mesh wall, pushing air through the hotwire and mesh. We are testing in increments of 10% fan RPMs, scaling from 40% to 100% for LPM, sitting at 100% only for temperature, and scaling from about 60-70% to 100% for noise. Our noise floor is ~26dBA, so we have no test resolution to scale below these percentages.

Note that we have a new wind tunnel in for fan testing, but it is unfortunately too small for 200mm fans. The tunnel will be used on 120 and 140mm units, but was not used for today’s tests.

For thermals, we are following our case testing methodology:

Our first test will show the airflow of the fans, and is measured with an anemometer recommended to GamersNexus by a couple of thermal engineers in the industry. This is the same anemometer we used in our Noctua fan comparison when looking at the China-made versus Taiwan-made fans.

Because we can’t use our new wind tunnel with fans that are this large, we have to do it the old-fashioned way: We’ll be benchmarking for linear feet per minute airflow, which can be called either FPM or LPM, depending on who’s asked, and we’re doing this as measured through a side panel. Our assumption is that most users will be placing these fans inside of cases, and probably behind a mesh of some kind.

Starting with our LPM chart now, we’re looking at a range of 40% to 100%, for which we’ll have matching RPM numbers in a moment.

The Noctua NF-A20 200 ($30 list price) fan pushed air at 423 linear feet per minute at 100% RPM, a lead over the Cooler Master MasterFan MF200R’s 378LPM. Keep in mind that these gains don’t necessarily translate directly to performance uplift in a real system, as airflow is complex, so it’s not a linear scale to convert LPM gains to temperature gains.

At the low-end of the RPM range, from 40% to 60%, Cooler Master retained a lead, but those speeds are low enough that you’re really not moving much air anyway, and not doing a whole lot of cooling: At 40%, we’re at 145-160LPM, with a breeze weak enough that there won’t be much appreciable change in component performance. The two tie at 70%, matching at 275LPM. Noise-normalized performance will help us form a comparison. 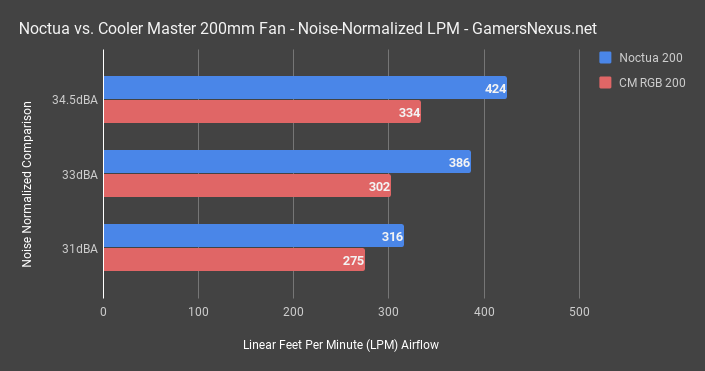 As for where these noise levels were chosen, here’s the noise chart.

Our testing scales down to about 26.9dBA, which is where we no longer have test resolution. The noise floor of the room is 26dBA, and we disable all system fans, so it is not possible for us to test below this noise floor, and we lose accuracy as we approach 26dBA.

The Noctua fan remains generally ahead, but has a wider acoustic performance lead at the low-end. If you recall, Cooler Master had a bit of an LPM lead at the same low-end, which would mesh with these noise findings. 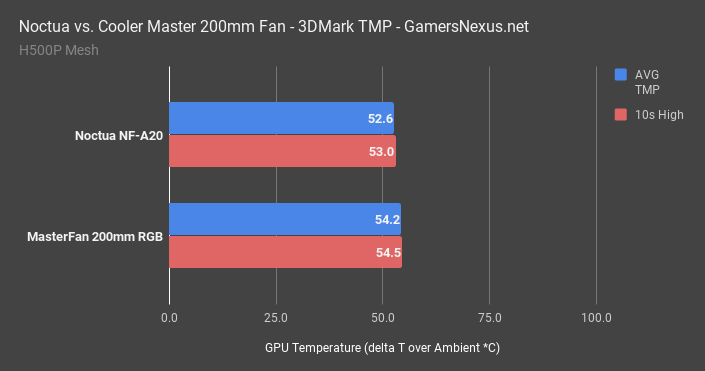 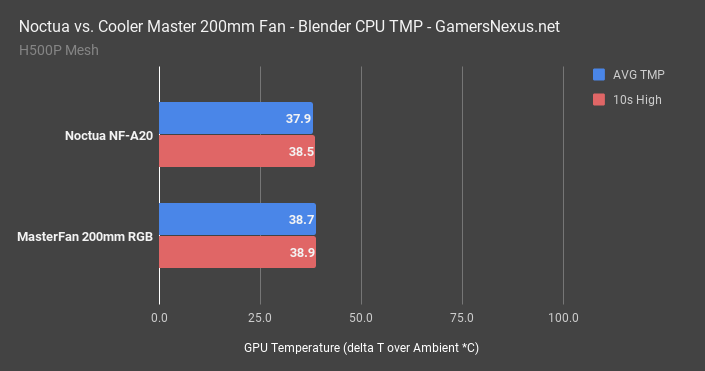 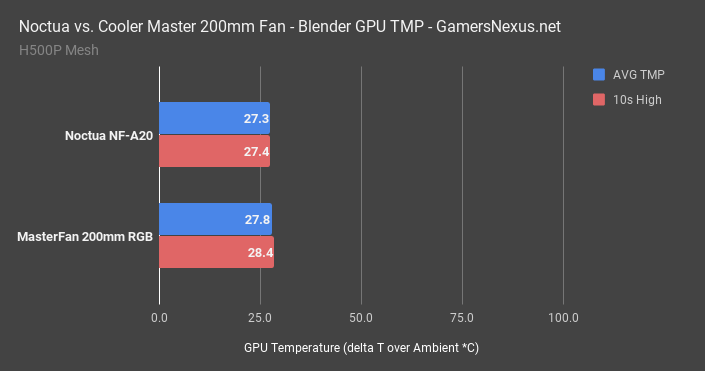 As for temperatures, Blender GPU testing often had our differences within margin of error and test resolution, with a maximum change of about 1 degree Celsius. The Blender CPU test shows about the same. Testing 3DMark Firestrike, we saw the Noctua fans were generally about 1 to 2 degrees advantaged for GPU temperatures, so not that exciting.

Thermal differences within the H500P “Meshify” aren’t appreciable when both fans are at 100% RPM, but again, thermal testing is the most complex aspect of this: There are a lot of variables, and performance in one case may not equate performance in another case. We do know that, relative to each other, the Noctua fan pushes a higher LPM than Cooler Master at the higher RPMs, and manages to do so while retaining competitive noise levels. The Noctua NF-A20 could be run at 90% and achieve similar airflow and acoustic performance to the Cooler Master fan at 100%, which is potentially beneficial to some noise-sensitive users; that said, of course, the Cooler Master fans do have a visual advantage, and Noctua doesn’t even try to compete on that front. The fans also come stock with the H500P, making upgrades difficult to justify for purchasers of that specific case – the performance uplift is not necessarily noticeable enough, or noticeable at all (depending on noise sensitivity), and it’d be a $60 purchase for two.

Cooler Master’s MF200R fans did have a bit of axial wobble, we noticed. The large ring on the outer edge of the fan blades may contribute to this, or perhaps just weight distribution being uneven, but the fan wobbles slightly in an out-of-true manner. This causes LPM readings to have a wider range than the Noctua fan, as the LPM performance seems somewhat contingent on the axial wobble or apparent precession of the axis.

One note: The Noctua NF-A20 isn't a perfect fit in the H500P. You will either have to make some modifications or use only some of the screw holes.

We have a bigger fan round-up coming shortly, focusing on 120mm and 140mm units. Stay tuned for that. It’ll be another week or two, probably.