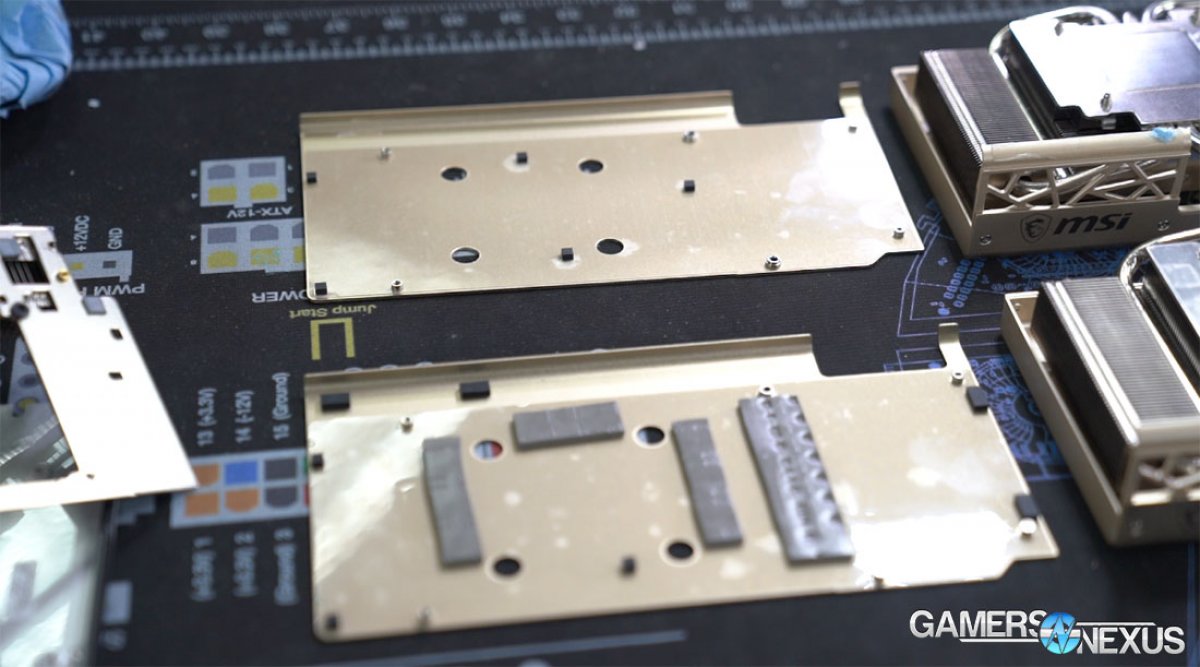 MSI has made production changes within the confines of manufacturing and timelines, and now has thermal pads added to the backplate (not present before) and repositioned on the memory. The backplate previously did not have a thermal interface between it and the heat source – the flip-chip BGA GDDR6 modules – and so the air between the backplate and the PCB ended up acting like a heat trap. Adding thermal pads to the backplate helps, but so does repositioning the GDDR6 pads toward the center of the module. Flip-chip BGA packages will have their heat closer to the PCB (basically against it) and will be centered in the black module’s X/Y axis. MSI told us that, for reasons we don’t fully understand, it was unable to make changes to its video card thermal pad sizes. This affects multiple models and both AMD and NVIDIA cards. MSI was apparently limited to repositioning the pads and adding some more to the backplate, but did not resize the top-side thermal pads. We’re still not 100% sure what MSI’s reasoning is, but the company seemed to claim it had something to do with mounting pressure. There was some detail lost in translation between the multiple layers of management, engineering, and us, so we’re just going to focus on testing the fix instead.

To get the full recap, check our original article or the follow-up mod we did.

Visible differences include a switch in memory suppliers (although we did a cooler transplant to the old PCB to eliminate this variable) between Micron and Samsung, but also the thermal pad addition to the back. MSI also added guidelines to the copper memory coldplate to help factory workers center the thermal pads.

Some really quick notes on testing. We’re using our same test methodology as the 5700 XT Evoke review, but there are a few important things to point-out for this kind of test:

Let’s get into the results right away. For test bench components, visit our previous article.

Here’s the table that matters most. This is with a single fan speed set, putting out 40dBA at 20” away and spinning at 1730RPM. We ensured the BIOS was also set to the same 200W power budget for all tests.

The original result had the MSI Evoke at 95 degrees Celsius, which is approaching maximum junction temperature for the memory. GDDR6 should be about 100-105 degrees Celsius for TjMax, from what we understand. 95C means that it’d easily reach TjMax in a case, where internal ambient can range from 30 degrees to 40 degrees in a room ambient of 21-24 degrees. We’re testing at 21 degrees Celsius, so it wouldn’t take much to push this number into territory of maximum values. And even if not, it’s still just comparatively bad cooling versus everyone else.

The revision at the same fan speed and power budget ran at 87 degrees Celsius, which is significantly improved. A temperature reduction of about 7.6 degrees from MSI’s change is huge, because MSI didn’t even change other design flaws with the cooler, like whatever mounting pressure issue is preventing them from using full-sized pads. If you already have an Evoke, it might be worth sending it in under RMA to get these pads.

We decided to next swap the new cooler onto the old PCB. This decision was made because the new cooler should be representative of what MSI is now selling, but the memory choice should likely be based upon supply. Further, we can’t really say they’ve fixed the issue with as many variables as we had, so we eliminated the PCB, GPU, and memory variables with a board swap. The result was 88-degree GDDR6 thermals, which is about in-line with the previous test and still improved. None of these are as good as our own MSI Evoke mod, where we used full-sized thermal pads and washers to increase screw tension, but MSI is at least in “sort of acceptable, but not great” territory from “totally unacceptable” previously. Our version was a lot better at 80 degrees, but we were also concerned that the washer mod may be risky for users as it has the risk of cracking the silicon if too much force is applied.

As for stock results, we have a chart for that as well. This is without manual fan control, so the fan speeds are now doing whatever VBIOS asks for. It looks like the old VBIOS was running at a louder 2330RPM, with the revision running at 2200RPM. Part of MSI’s better performance is from the higher fan speed in the newer VBIOS, which is also why we set the same VBIOS in all the 40dBA normalized tests.

Either way, if you use the card out of the box, it’ll be a bit louder than the first public release VBIOS, but about 100RPM lower than the initial reviewer VBIOS. The stock noise level in our test platform is 46.7dBA with the newest card. The VBIOS sets a 2200RPM fan speed to meet the temperature target, which appears to be 63 degrees Edge. That’s louder than it should be, but MSI was probably trying to overcompensate for its issues previously. GDDR6 thermals are good, at least, with an 80-degree reading for the revision under its new 2200RPM fan speed, and they’re not as bad when with a lowered fan speed.

If we look at the auto results for GPU thermals, you’ll see that the Evoke runs at 80 degrees Junction for the revision, or 84-86 for the original tests. The good news is that the thermal headroom afforded by the revision means you could tune the fan curve to be a little quieter without completely killing thermal performance, unlike previously.

Finally, as for 40dBA-normalized GPU results, those don’t really change. The revision’s results are the same as the original, which is mostly unsurprising, as the changes primarily target memory thermals. Our initial mod did better in GPU thermals from the increased mounting pressure, mostly. When we swapped the cooler, the GPU Junction thermals ran hot no matter how many times we swapped it, and that seemed to be a mounting pressure issue on the GPU specifically. Washers would again fix this, but that cooler isn’t the same as what came with the initial review sample, anyway, and GDDR6 thermals were our primary focus..

MSI has revised the cooler. MSI tells us that it is already shipping revised models, and may have been for a few weeks, but existing inventory will not have the fix. This is an unfortunate but typical part of improving products that are already in the wild. If you buy one now, there’s a chance you get old stock. In the event you’ve got an original model card with thermal issues, MSI tells us that it is offering free thermal pad replacement services. It is asking that users undergo the obvious time cost – likely a few weeks, unfortunately – to get the pads replaced professionally. Typically, we’d disagree with this and insist that the company offer a user serviceable option, e.g. a thermal pad kit (EVGA has done this in the past). In this instance, however, we agree with MSI’s decision to do the replacements itself. We noticed with both our Evoke cards that mounting pressure is very particular on this specific design, and that it can sometimes take multiple re-assembly attempts to get Junction temperatures back to where they were when built by the factory. Because of this specific challenge, we think it’s OK to require users send in cards for repair.

MSI hasn’t fully fixed this issue. For example, the backplate still has the plastic sheath between the plate and the thermal pad, which is just sort of stupid, frankly. It’s either an oversight or a manufacturing issue, but MSI should ideally be cutting out the plastic in the area contacted directly by a thermal pad. Still, heat-pad-plastic-metal is still better than the original assembly, which was heat-air-trap. The thermal pads are also still the smaller size, but at least repositioned properly (in theory, anyway – ours were better). We’d like to see MSI properly implement a fix for its next major video card cooler design. For now, the Evoke OC has exited “totally unacceptable” review territory and entered “not particularly competitive or good, but OK if it’s the best option in your region.”

We’re happy to see that MSI has listened to this criticism and shown an interest in improving its product, and we do believe that interest to be genuine. Remember: There are a lot of people in the chain, and although engineers and PMs often want to do the right thing for design, managerial inputs can change the outcome. It’s user feedback that can often back-up the engineers in making the correct changes. MSI is on the right path, but still has a very long way to go. It’s minimally on our list of “acceptable to buy, if you must,” as opposed to “absolutely don’t buy.”