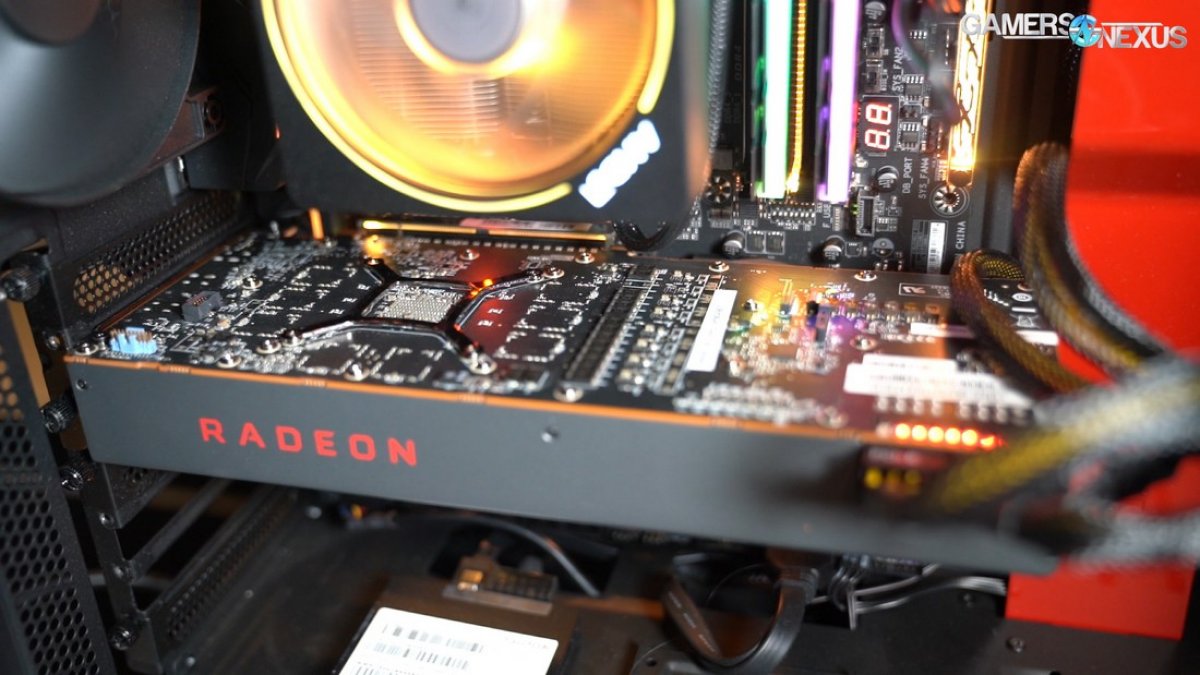 Although we're at the end of the hardest testing cycle we've ever had, with many nights spent sleeping in the office (if sleeping at all), we're not even close to the end of it. There'll be follow-up and additional product testing throughout the next week, and that's all because of the joint launches of NVIDIA Super and AMD Navi GPUs, mixed in most importantly with AMD Ryzen 3000-series CPUs. New architectures take the longest to test, predictably, as everything we know has to be rebenchmarked to establish new behaviors in the processors. Anyway, with all of that, there's still news to cover. Show notes are after the embed.

AMD reacted to NVIDIA Super today by officially announcing a GPU price cut to the 5700 XT, 5700 XT 50 (the special edition), and 5700. Each card has been cut by $50, coming down to $450 for the 5700 XT 50, $400 for the RX 5700 XT, and $350 for the RX 5700. Although some seem to have been fooled into thinking this was some extra-dimensional chess move by AMD to “bait” NVIDIA into launching Super and setting prices, we’ve spoken with insiders and have learned that this is reactionary to NVIDIA Super. Board partners in particular were caught by surprise. We’ll determine if it was a necessary move when we review the 5700 XT, which launches on Sunday, July 7. No shareholder wants to see a price cut before launch and it’s not great optics, functionally, to say “we were going to rake-in margin if NVIDIA didn’t check us.”

Regardless of what Jedi-like mindgames people think are being played between two companies that know everything about each other months in advance of the public, the good news is that prices have come down, and that will ultimately benefit everybody. It’s good to see a lively GPU market, something the CPU market has benefited from over the past two years. We look forward to reviewing these parts.

Speaking of, we’ve been buried in products to test since just before NVIDIA Super. AMD is launching something like 8 CPUs, with APUs mixed in there, 2 GPUs, and NVIDIA launched two GPUs. It’s been the busiest week in the history of GamersNexus, but we are dead-set on delivering launch-day reviews for several of the most pertinent products. Typically, readers can expect reviews on product launch days.

According to Western Digital’s assessment of the incident, at least 6 exabytes of NAND will be lost. “The company currently expects the incident will result in a reduction of Western Digital's flash wafer availability of approximately 6 exabytes, the majority of which is expected to be contained in the first quarter of fiscal year 2020,” says Westen Digital via press release. Toshiba didn’t disclose how much of its own NAND was affected, but some estimates peg the number to be around 9 exabytes.

Revenue and profit loss aside, TrendForce points out how this will impact client confidence in the companies. “A fallout that Toshiba and Western Digital can expect is some loss of confidence from their downstream clients. The reliability of their production lines is now under doubt as the base is not resuming normal operation as quickly as can be reasonably expected for a leading-edge semiconductor plant,” says TrendForce.

AMD appears to be engineering a fixed-function solution for ray intersections. The technology is detailed well in AMD’s patent application, if you’re curious to learn more.

The US President has announced that the US-China trade war has reached a halt, however indefinite it may be. In so doing, the US also revealed it would reverse sanctions on Huawei and suspend the most recent $300 billion tariff proposal; existing tariffs remain unaffected, like those that affect products in the PC hardware industry. Those are all still in effect.

Huawei was placed on a so-called entity list, and saddled with a trade black listing that has seen most major US tech suppliers being forced to retract their business with the company. Without access to US IP and chip technology, as well as operating systems like Android, Huawei's business in the western part of the world is uncertain to say the least. However, the Bureau of Industry and Security granted companies a special license to continue supplying Huawei, although it was intended to be temporary. Intel and Microsoft have also pledged to support Huawei devices with critical security updates for the foreseeable future.

Just exactly how much the US is relaxing sanctions against Huawei is unclear at this point. The US stated any network equipment affecting national security wouldn’t be sold, and anything 5G related is almost certainly off the table.

In holding off additional tariffs, game consoles are able to avoid a significant price hike. When Trump announced the $300 billion tariff proposal that would affect electronics like consoles, console makers were quick to issue a joint statement warning of how they could affect consumers and industry alike. For now, it seems like the situation between the American and Chinese economies is a marked improvement. We’ll see how it progresses -- or regresses.

The Korea Herald is reporting that Nivida will partner with Samsung for its 7nm Ampere GPUs, expected sometime in 2020. The report cites Nvidia Korea leader Yoo Eung-joon as confirming the switch from TSMC. In a statement to Tom’s Hardware, Nvidia neither confirmed or denied the veracity of the report.

“We do not comment on rumors or speculation. We already use both TSMC and Samsung, and qualify each of them for every process node. We can’t comment in any further detail on future plans, but both remain terrific partners," said Nvidia.

The report is interesting, as reports surfaced last month that Samsung was aggressively undercutting TSMC at 7nm.

AMD’s Ryzen 3000 and updated AM4 platform are right around the corner, and with it comes the first consumer-oriented PCIe 4.0 products in the form of SSDs. Currently, there are two available for order: The Sabrent Rocket and Corsair Force MP600. Gigabyte has an Aorus model coming, but won’t be available at Ryzen’s launch.

Of the two available, both use Toshiba’s 96-layer TLC NAND and are based on Phison’s PS5016-E16 controller -- currently the only PCIe 4.0 SSD controller on the market. Both Sabrent and Corsair are offering capacities of either 1TB or 2TB, and both offer similar performance; sequential reads of 5GB/s, and sequential writes around ~4GB/s.

AMD has filed for a patent that outlines using thermoelectric cooling for 3D stacked memory. The patent describes using P-type and N-type semiconductors to create an integrated Peltier effect. The drawings associated with the patent essentially illustrate inserting a Peltier device between the memory die and logic layer of a chip.

This patent makes sense, as AMD has been looking into embedding memory onto processors, similar to what Intel is doing with its Foveros technology.

AMD is continuing to gain ground in the enthusiast segment, with well known binning and overclocking service providers Silicon Lottery offering binned Ryzen 3000 chips. Silicon Lottery has updated its website with placeholders for the Ryzen 7 3700X, Ryzen 7 3800X, Ryzen 9 3900X, and Ryzen 9 3950X. According to the website, availability for the binned chips is July 13th, roughly a week after Ryzen 3000’s July 7th launch.

As Ryzen 3000 chips will use a soldered heat spreader, it’s unlikely Silicon Lottery will be extending delid services to the chips.