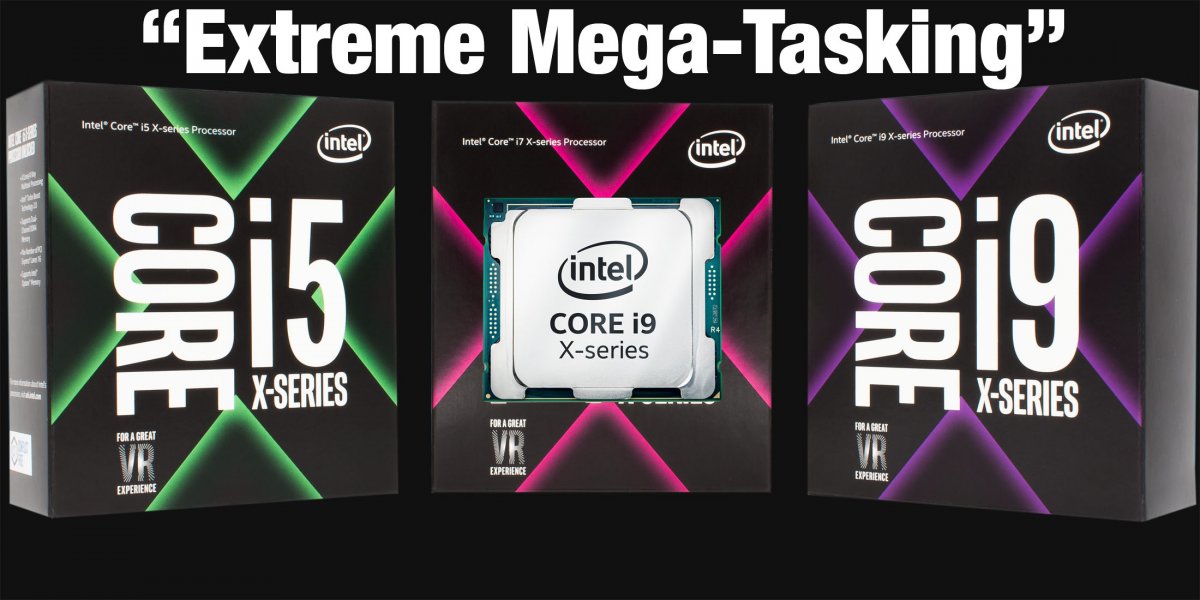 Intel seemingly moved its KBL-X and SKY-X CPU launches up, with the spotlight pointed at nine new enthusiast-class CPUs. A few of these are more similar to refreshes than others, but we also see the introduction of the i9 line of Intel CPUs, scaling up to 18C and 36T on the i9-7980XE CPU. We’ll go over prices and specs in this Computex news item, and note that we’ve already got motherboard coverage online for EVGA’s new X99 motherboards.

Starting with the marketing, then.

Intel’s marketing materials for the new KBL-X and Skylake-X CPUs employ words like “EXTREME MEGA-Tasking,” presumably a step down from Gigatasking and a step up from Kilatasking, and also words advertising “advanced gaming” or “VR” readiness. VR readiness is ever the buzz word right now, and is also something we proved fully possible on both the R7 1700 and i7-7700K with objective benchmarks – so a $2000 CPU doesn’t really seem necessary for it; in fact, it’s completely unnecessary for any VR gaming that can be done today. VR is moving slowly enough that buying for “future proofing” is a losing battle, so we’d just suggest immediately ignoring the VR-focused discussion in Intel’s marketing slides. Their own 7700K – or even the non-K – would not yield a perceptible difference in modern VR gaming performance. Realistically, the higher clock will more likely benefit the 7700 series, if anything. 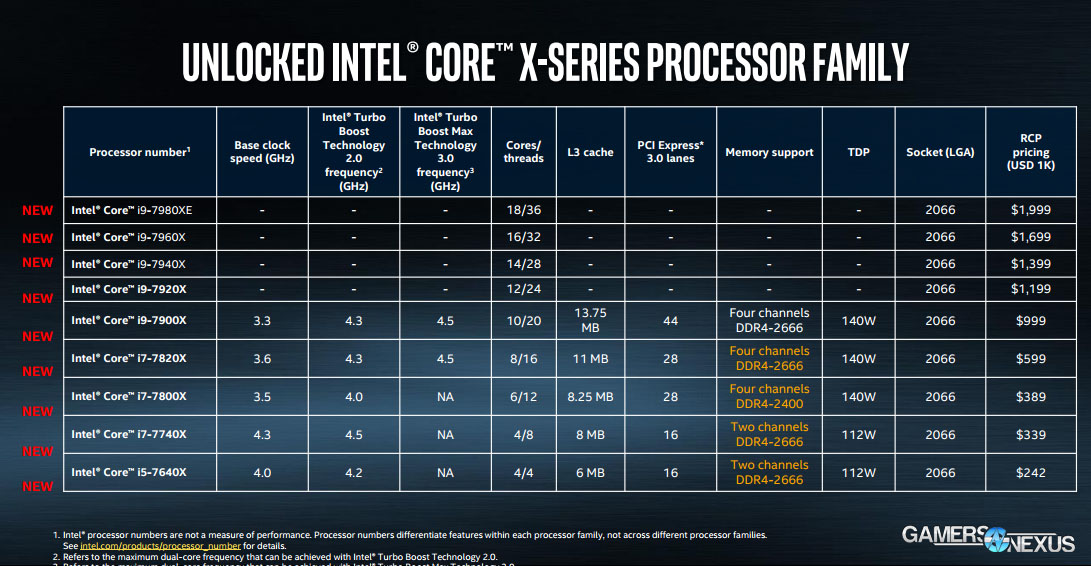 The i5-7640X and i7-7740X are Kaby Lake-X CPUs, with the rest falling in the Skylake family of architectures. All of these CPUs socket into the new LGA 2066 socket of X299 motherboards, which host 30 HSIO lanes, maximally supporting 24 PCIe Gen3 lanes. Note, of course, that chipset support of PCIe is not beneficial for graphics configurations outside of x4 setups. SLI demands x8 minimally, and pulls its lanes from the CPU instead of the chipset. Regardless, this move coincides with what we saw on Kaby Lake. As for the CPU PCIe lanes, we move from 16 on the Kaby Lake X parts to 28-lane and 44-lane options on Skylake X.

Regarding LGA 2066 and X299, it seems that Intel’s shift away from the original KBL socket is to consolidate two platforms into one, while theoretically offering greater scalability on the same motherboard.

Here’s a shot of an EVGA board we looked at in our accompanying content piece: 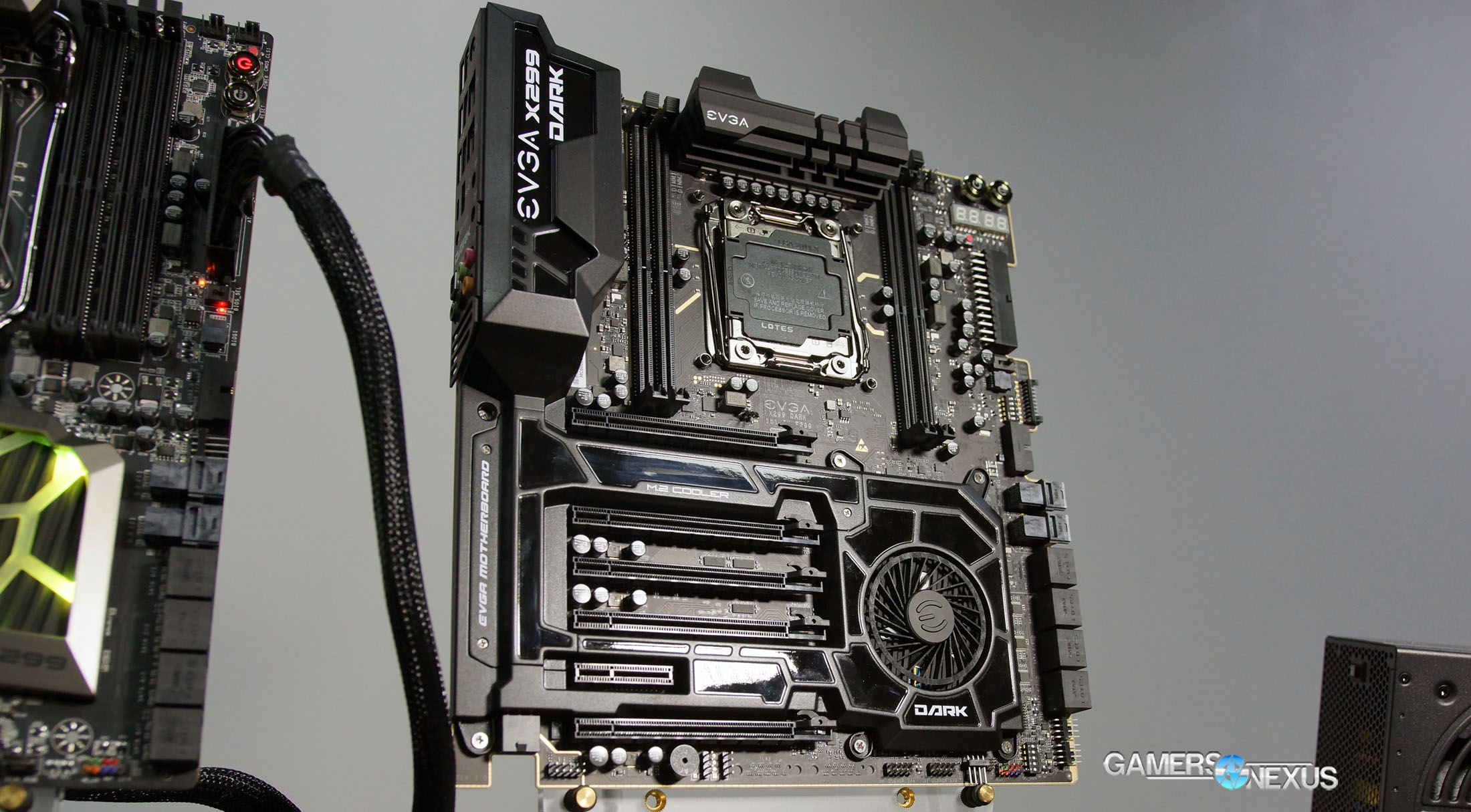 The CPUs to watch of this lineup will be 7800X, which competes with the Ryzen line in both price and target use case, and the i9-7960X, which will likely compete with AMD’s Threadripper. The 7740K is less interesting, meanwhile, and basically increases base clock by 100MHz at the expense of more power consumption. This will effectively replace the 7700K, just with a new socket, somewhat annoyingly.

Speaking of that i9 CPU, just a quick note here: We’ve seen some folks remark in the comments that AMD’s Ryzen has spurred Intel to “create” the i9 series. While we agree that competition is great and that Ryzen is triggering some of it, to think that i9 is a response to Ryzen is misguided. Silicon like this takes around 18 months to go through the development process, and spends the last six months of its pre-sale life in validation and fabrication. The i9 line is nothing more than a name. The silicon already existed. It may be true that Intel introduced the new i9 branding in response to Ryzen, but it certainly wasn’t built ground-up as a competitor. Ryzen didn’t even exist retail (or close to it) when this thing started development.

With the spotlight on these CPUs, there’s still a lot undocumented – we don’t yet know clocks, for instance, of the higher core-count products. It’ll come down to how high Intel can clock those cores on those flagship-grade CPUs to determine if there’s reasonable return on investment for anyone in our core or fringe audiences.

Outside of clocks and cores, there have also been changes to the caching system. We don’t yet have full details, but can get into the basics. 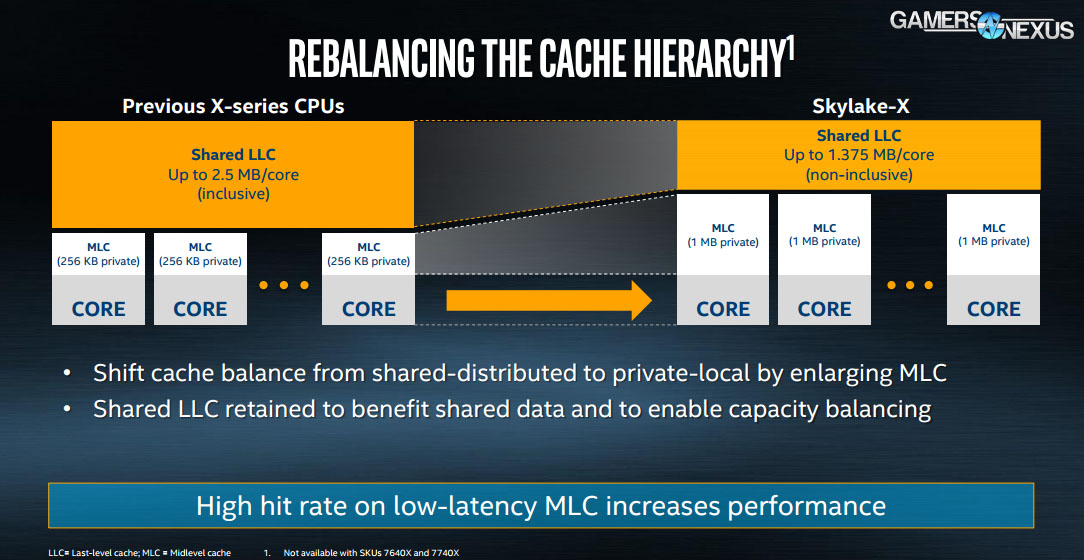 From the very limited information we have, it seems as if Intel is reducing its last-level cache in favor of larger L1 and L2 caches, which theoretically reduce cache misses and probes into L3. This should assist in latency overall, which is further aided by increasing private cache sizes to 1MB per core. Beyond this, we can only speculate. 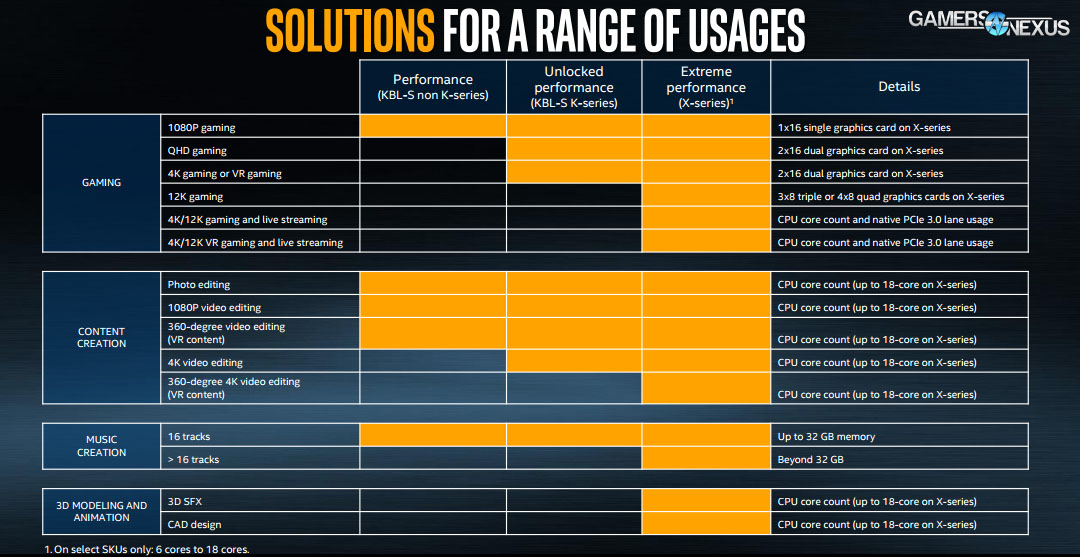 Intel makes it a big point to highlight the “range of uses” for the new X-series CPUs, suggesting that Kaby Lake K-series CPUs are needed for 4K or VR gaming, leaving the non-K SKUs marked as unsupporting of 4K or VR gaming. This is an interesting marketing slide, seeing as we've benchmarked non-K SKU CPUs in both VR and 4K and have found them perfectly adequate. What's even more interesting is that Oculus and HTC both specify even i5 CPUs as being “VR Ready” – something we've also tested and agree with. It's interesting that Intel is attempting to sacrifice its own line here, saying that K-SKU i7 CPUs are needed for VR, considering that is plainly untrue. It is as if Intel is trying to find reasons to slap “gaming” and “VR” onto $1000+ CPUs.

Intel also says the X Series is needed for 12K gaming – a very narrow use case, if we’ve ever seen one – and for 12K streaming, for which adequate upload speeds hardly exist. The only reason this statement makes sense is because of lane availability, not actual performance of the CPU. And even then, we begin facing another challenge: nVidia has all but dropped support of 3-way and 4-way SLI, and AMD doesn’t presently – though Vega may change this – have an offering where 3-way or 4-way CF makes sense.

The cheapest 44-lane CPU on offer is the i9-7900X, which runs a 3.3 to 4.5GHz clock, depending on turbo state, with the most common gaming frequency sitting nearer to 4.3GHz. The 7900X is a 10C/20T CPU with 44 PCIe Gen3 lanes and a $1000 price tag. Some of these prices are certainly better than Intel's previous X line, now that they've got some competition, but they're not as low as we'd like them to be. That said, we'll see how it goes in testing. Advertising any of these CPUs as “gaming” focused is a losing argument; we saw how that worked out for the 1800X and AMD's much more cost-effective 1700 and 1600 CPUs, and it'll likely pan out the same way here.

Aside from these basics, Intel is also changing boosting behavior, but we’ll talk about that more in the eventual review. Some models will also ship with an Asetek CLC (TS13X), which is a 120mm pump+rad combo that seems to mirror any other Asetek pump+rad you could find in the same generation.

We would have liked to see Intel really double-down on the gaming line, like the 7700K and G4560, where they presently hold performance and value arguments against AMD’s nearby competition (for gaming). Alternatively, a major rework or restructuring of the i5 line and pricing would be good, given that the R5 series CPUs largely outclass Intel’s i5 CPUs in cost-for-cost comparisons. We still hold, in our testing, that the G4560 -> R5 -> i7-7700K stack is what makes sense in each price category for gaming. It’s different for production, of course, but gaming is where Intel still competes strongly. The company will have much more difficulty in the production workloads given its current price tags, but its ultra high-end stuff shown above could prove worthwhile. We’ll see.

As always, we recommend not preordering until we’ve had a look at this. Stay tuned for full coverage.

Here are the SKUs + prices: