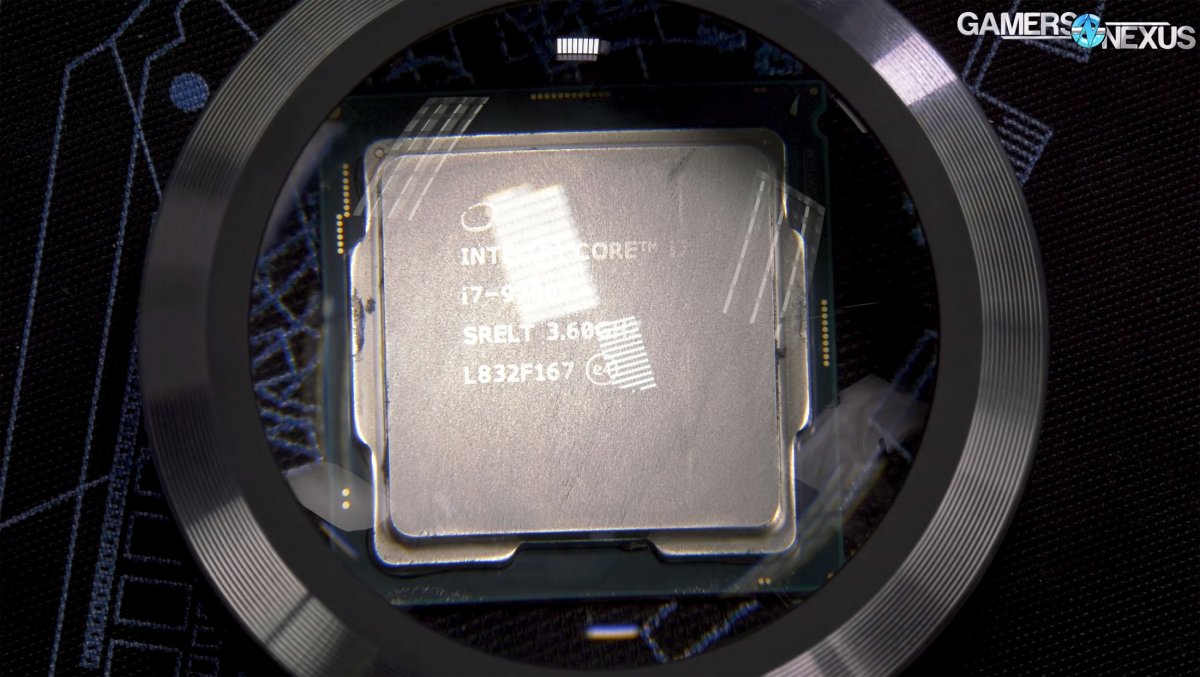 In this week's hardware news, we have an exclusive news item pertaining to Intel's 10-core CPU thermal packaging for the Z490 mainstream desktop part. We've verified the news as accurate and are working to verify additional information sent to GamersNexus by industry partners. In the meantime, DDR is in the news again, GDDR5 is almost out of the warehouses as GDDR6 replaces it, and Atari further taints its name.

GamersNexus recently received information through a system integrator about the new Intel 10-core CPUs. We have verified the information as accurate.

Intel’s new 10-core CPU for the rumored Z490 platform, which has been talked about for at least a year now, has a renewed focus on thermal performance in order to maintain high clocks across more cores. The new 10-core CPU will be about 100mm^2 smaller than the previous 7900X 10-core chip, which makes sense, since it has fewer memory channels and less I/O. The 10-core CPU die will be lower to the substrate, bringing the IHS lower as well. It’s still going to be Intel’s solder solution from the 9900K, but with the die size increasing, the silicon getting closer to the substrate, and the IHS getting pulled in tighter to the CPU, the thermal solution should be overall improved versus the 9900K. The IHS has also been slightly redesigned. More die surface area to spread the heat across will help with the core count increase, as will bringing the silicon closer to the substrate and potentially reducing the silicone adhesive sealant.

The new die size is about 22x9mm, roughly measured, as opposed to 19x9mm for the 9900K and 22x14mm for the 7900X. As we understand it, the solution should be improved relative to the previous CPU.

The 10-core CPU will use socket 1200 motherboards. We have more information we are actively verifying and will likely release in our next HW News item, so check back for that.

Despite the fact that the JEDEC specification for DDR5 isn’t finalized yet, we know that DDR5 memory is coming, as memory makers are preparing for a ramp in production both this year and next. Samsung recently talked about its upcoming DDR5 and its EUV-based D1a process that should enter volume production in 2021. Now, SK Hynix is offering some insight into what its DDR5 memory could look like.

SK Hynix states that while developing its DDR5, the goal was to target a 50% increase in bandwidth per DIMM. In order to do this, SK Hynix states that it adopted a 32-bank structure for DDR5, double that of the 16-bank structure for DDR4. Also, DDR5 will see the burst length (BL)2 double from 8 to 16, in order to increase memory access availability two-fold.

DDR5 will also incorporate a “Same Bank Refresh'' function allowing the CPU to access certain banks while others are operating or refreshing, which should improve latent memory access. All this, according to SK Hynix, is intended to help DDR5 memory scale across more CPU cores, as we’ve entered the era of 64 cores in the mainstream desktop.

As for specs, SK Hynix suggests that its DDR5 will pick up where DDR4 was meant to top out -- around 3200Mbps. Of course, we’ve seen kits go well beyond 4000Mbps and even hit DDR4-5000, but they also come with seriously inflated price tags and voltage requirements. DRR5 will seemingly start at 3200Mbps and scale all the way to 8400Mbps. DRR5 will also see a voltage reduction to 1.1V, a marked reduction over DDR4’s 1.2V. DDR4-5000 currently requires 1.5V to operate at advertised frequencies.

SK Hynix will begin production of DDR5 this year.

Intel has announced that select Haswell-era chipsets are being trotted out to pasture. Intel broke the news via PCN (product change notification), per its usual EOL/discontinuance updates.

The chipsets being EOL’d are under the Lynx Point codename and associated with socket LGA 1150. The chipsets are: Q87, H81, C226, QM87, and HM86. These are 8-series chipsets that entered the market in 2013, built on Intel’s 32nm process and paired with 20nm, 4th-gen Haswell chips. Pour one out for the time when Intel’s naming scheme was simpler.

The H81 was especially popular, as it served as the economy version of the higher-end Z87. Of course, the chipsets were demarcated by features such as overclocking, a segmentation model Intel still insists upon today. The other chipsets were a bit more obscure, targeting business/enterprise customers and laptops.

Products using the affected chipsets will be available for order until March 31, 2021; final shipments go out September 30, 2021.

Nvidia Claims Industry Is Running Out Of GDDR5

Rumors of a GTX 1650 refresh have been circulating since around February, and everyone's favorite hardware leaker @momomo_us, seems to have spotted listings at a German retailer suggesting the rumor could materialize.

The rumor -- and purported refresh, for that matter -- aren’t anything outlandish; it would see Nvidia retro-fit the vanilla GTX 1650 (non-super) with GDDR6 memory. There’s already been precedent for this in Nvidia’s past hardware lineups. Nvidia has rewarmed past versions of cards like the GTX 1060 multiple times, adding GDDR5X memory.

As for the upgrade, PC Gamer reached out to Nvidia for comment. "The industry is running out of GDDR5, so we’ve transitioned the product to GDDR6," said Nvidia to PC Gamer.

Whether or not Nvidia’s comment is indicative of actual GDDR5 supply, the industry at large is already transitioning to GDDR6 SDRAM. Nvidia’s 20-series cards and AMD’s Navi 10 GPUs all use GDDR6. Additionally, Sony’s PS5 and Microsoft's Xbox Series X will make the jump to GDDR6 as well.

In between its busy schedule failing to launch its VCS, Atari has also had a packed calendar full of other important tasks, like gambling, getting passed around between partners, and disappointing its parents. The Atari brand has been gutted and left to rot, with its parasitic occupants trying to find anything of value left in the acrid carcass of a brand once loved. It’s horribly sad to witness, but it’s our job as proud news reporters to cover even the most gruesome scenes.

In its latest class of “explaining English idioms for ESL learners,” Atari demonstrated what the phrase “grasping at straws” means for all its students. The company has launched its new Atari Chain cryptocurrency, which it bills as a “real” currency -- tokens, they’re called -- that have no intrinsic value in any use case except for Atari’s online casino. It’s like a worse version of an arcade, where you don’t want to play the games but you still have to use the fake money. The company literally calls it a “casino,” by the way, and we assume it also tagged the @SEC in its tweet announcing the cryptocurrency. Atari emphasizes that these are skill games, and also uses the phrase “innovative gambling games” to describe poker, roulette, and blackjack. Because these are so innovative, you’ve probably never heard of them before.

Atari also boasts “liquidity” in its description of the token, although it’s hard for us to believe that Atari knows anything about liquidity.

The company says that, quote, “our objective is to work on providing liquidity to token holders. We will work on listing the Atari Token on exchanges, enabling token holders to exchange them against other crypto-currencies.” Just like arcades from the 90s, trading tokens from one arcade to another isn’t what anyone would call “liquidity.”

The good news for Atari is that lots of people in the world want to launder their money, and we’ve heard it’s big business, so maybe they have an untapped audience that can use their Atari Chain token. Maybe try running some ads in known hideouts of the mob.

When you visit Atari’s website and click the “what can I do with Atari Token” drop-down, it states that the “long-term goal is to provide as many uses as possible. This obviously will take time.” If you’re wondering what the short-term goal is, we’d assume it’s to make as much money as possible before Atari gets shut down by the SEC.

That’s very compelling, Atari. We hope to continue following this story for when Atari demonstrates the next English idiom, “I’ve got a bridge I’d like to sell you.”

Intel recently took the wraps of its new 10th gen, Comet Lake-H mobile chips. The announcement comes as AMD’s Ryzen 4000 (Renoir) APUs have just landed, setting the stage for Intel and AMD to battle it out in the laptop space in the coming weeks and months.

At the top of the stack is the flagship i9-10980HK with 8C/16T and a 5.3 GHz turbo boost. That turbo boost will hinge upon Intel’s Thermal Velocity Boost (TVB) technology, which dictates turbo frequency based on thermal conditions. Which is to say, mileage will vary depending on a laptop’s cooling solutions. As if Intel’s naming scheme and segmented product stack wasn’t confusing enough, it seems turbo speeds are the next thing to get needlessly complicated.

Comet Lake H will essentially have two turbo boost frequencies, depending on whether or not Intel’s TVB is enabled, and more importantly, supported. It seems that TVB will greatly rely on OEMs designing cooling solutions specifically for the extra megahertz headroom, which suffice to say, won’t be among Intel’s “thin and light” designs.

TVB will look for an opportunity to boost frequency beyond the normal turbo boost based on the operating temperature of the CPU relative to its maximum temperature threshold and available power budget. TVB will allow an additional 200MHz of headroom for any 10th-gen CPU operating below 65C, which is where Intel is getting its 5.3 GHz single-core turbo from for the i9-10980HK, which has a non-TVB turbo of 5.1 GHz.

The i9-10980HK is also the only fully unlocked SKU; Intel is listing the i7-10850H as “partial” in regards to an unlocked multiplier. Intel is apparently limiting frequency overhead to +400MHz with the i7-10850H.

The i7-10850H is probably going to be the more interesting i7 part. The i7-10850H is a 6C/12T part, and as mentioned above, will allow a partial overclock where thermals permit.

Intel seems to tout these CPUs as being built for gamers, and is keen to drive home the frequency numbers. This makes sense, to the extent that there isn’t much else to behold of Intel’s fifth 14nm iteration. Intel’s primary advantage over AMD since Ryzen has been in gaming, where it’s built that lead (however shrinking) in raw frequency and single-threaded performance. Intel really has nothing else left to boast about when it comes to 14nm silicon, no matter how many plus signs you affix to the end of the number.

Intel is also sprinkling in iterative upgrades such as Thunderbolt 3 and Wi-Fi 6 AX201, although both of these features will depend on specific hardware requirements dictated by OEMs. For instance, Thunderbolt 3 still needs a seperate Thunderbolt controller, as it’s not built into the CPU itself. Intel is also upping memory support to dual-channel DDR4-2933, supporting a maximum of 128GB. Comet Lake H will also offer Intel Optane memory support.

Intel claims it has over 100 designs featuring Comet Lake H launching this year.