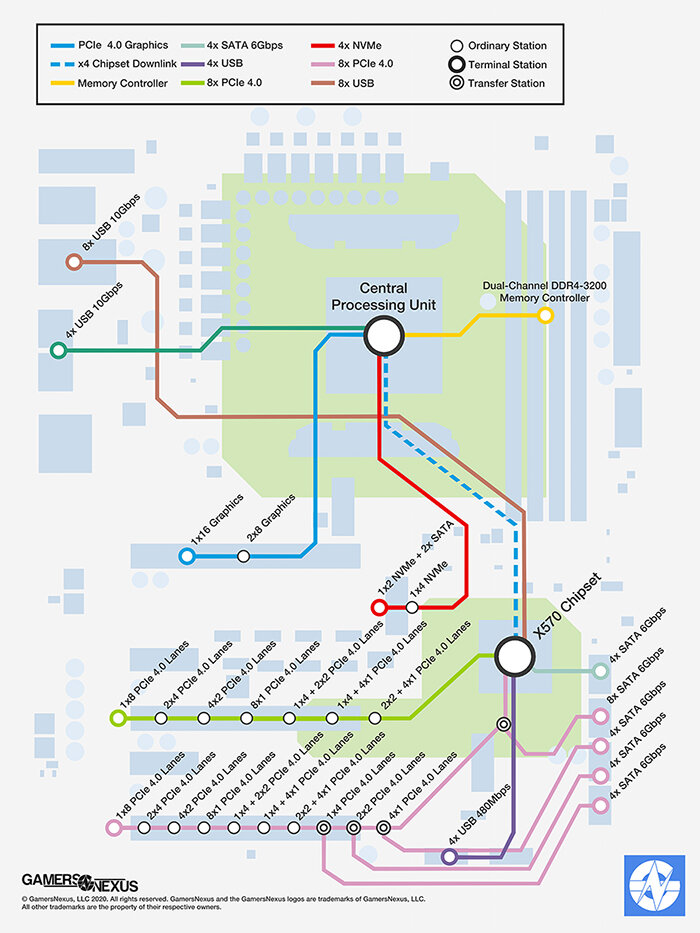 We’ve mentioned hardware-accelerated GPU scheduling a couple times over the past few weeks, after it surfaced in the May 2020 update for Windows 10. Most coverage online has highlighted that people expect the feature stands to reduce latency and overhead between the GPU and OS by allowing the GPU to manage its VRAM directly, although a lot of people have lost sight of the plot with regard to latency: This turns into more of a question of whether buffering was being used previously, something we’ll talk about in our GPU scheduling piece that may already be live, but isn’t filmed at the time of filming this news video.

“Over time we have significantly enhanced the GPU scheduler at the heart of WDDM, supporting additional features and scenarios with each new WDDM version. However, throughout its evolution, one aspect of the scheduler was unchanged. We have always had a high-priority thread running on the CPU that coordinates, prioritizes, and schedules the work submitted by various applications,” says Pronovost.

That high-priority thread essentially means a certain amount of intrinsic overhead, as there’s a certain amount of buffering that has to take place between the CPU and GPU. Moreover, a user’s input is picked up in one frame, but isn’t rendered by the GPU until the following frame. Pronovost notes that this type of overhead is often masked by how applications are written, but it looks like hardware-accelerated GPU scheduling is laying the groundwork to change that altogether.

With hardware-accelerated GPU scheduling, Windows will be able to offload most GPU scheduling tasks to a dedicated “GPU-based scheduling processor.” That’s assuming the right hardware (graphics card) and support at the driver level. As of now, both AMD and Nvidia have rolled-out drivers for hardware-accelerated GPU scheduling; however, AMD is currently limiting support to the RX 5600 and 5700 series, both desktop and mobile, as the drivers are in beta. Nvidia’s support is a bit more broad, encompassing all RTX cards.

Pronovost goes on to say that “Windows continues to control prioritization and decide which applications have priority among contexts. We offload high frequency tasks to the GPU scheduling processor, handling quanta management and context switching of various GPU engines.”

While both AMD and Nvidia have pushed drivers for hardware-accelerated GPU scheduling, neither exactly made a big deal out of the feature -- not yet. That’s likely because this is just the beginning, as Pronovost hints at, saying that “the new GPU scheduler is a significant and fundamental change to the driver model. Changing the scheduler is akin to rebuilding the foundation of a house while still living in it,” and “The goal of the first phase of hardware accelerated GPU scheduling is to modernize a fundamental pillar of the graphics subsystem and to set the stage for things to come, but that’s going to be a story for a another time.”

So, for now, Microsoft says that most users probably won’t notice any significant change due to hardware-accelerated GPU scheduling, as it will take time and development resources for Windows and GPUs to fully leverage the feature.

This week, news broke from the Pentagon of a list of companies accused of having ties to the People's Liberation Army (China’s military). Among those companies is Inspur, who is the third largest server manufacturer globally, and the single largest in China. The list, of course, also includes Huawei.

As a result, Intel had been temporarily forced to halt all shipments to Inspur, as the US government is looking to cut off access to American IP and technology. Tom’s Hardware reached out to Intel for a comment, and received the following statement in return.

"We have temporarily paused shipments to one customer in order to ensure compliance with the U.S. Government export regulations. This is a temporary pause expected to last less than two weeks for some items, and others will resume in a matter of days. We will resume shipments as soon as we can do so while ensuring compliance with U.S. law,” Intel said to Tom’s Hardware. We’ve included their story in our show notes document if you’d like to read the report.

It isn’t presently clear which products Intel had to halt sales of, nor how much of a financial impact that might have had on the bottom line, but none of that matters: Within days, Intel started shipments again. Tom’s followed-up with Intel and received confirmation that the two companies began doing business together again.

Serial leaker and hardware sleuth momomo_us has unearthed some technical documents that seemingly confirm that Intel will be moving away from the LGA1200 socket for Alder lake. This isn’t altogether a surprise, as we’ve already seen rumors suggesting a new LGA1700 socket, meaning LGA1200 will only live through Comet lake-S and Rocket Lake-S.

The documents specifically mention Alder Lake-S and Alder Lake-P. We know Alder Lake-S is destined for the desktop; we know less about what form Alder Lake-P is supposed to take. Per Intel’s socket naming scheme, the LGA1700 socket would boast 1,700 pins, which is 500 more than LGA1200. That’s a lot of new pins. Intel increased the pin count for Comet Lake, but the additional pins will mostly be for future I/O expansion that we expect will take form when Rocket Lake drops. This likely includes a heavier focus on PCIe, including a move to PCIe Gen4.

There's currently an unsubstantiated theory that Alder Lake will offer a hybrid approach similar to Lakefield, which is akin to Arm’s big.LITTLE design. That theory posits that Alder Lake could come with a 16-core hybrid design, mixing 8 ‘big’ cores with 8 ‘little’ cores. Lakefield uses a Sunny Cove (big)/Tremont (small) design. Take that with a huge grain of salt, for now.

In another find by momomo_us, it seems we’re destined to get yet another rewarmed GTX 1650, this time in the form of the GTX 1650 Ultra. This particular SKU is one from Galax, but we’re likely to see more from other AIB partners soon enough.

As other publications have mentioned, the GTX 1650 Ultra seems to retain most of the specs from the previously refreshed GDDR6 models, with the exception of a different cut of silicon. That silicon would be the TU106-125 die, which is a derivative of the same GPU in the original/vanilla RTX 2060 and RTX 2070, as well as the RTX 2060 Super. Other specs are mostly consistent with other refreshed GTX 1650 cards: 896 CUs, 4GB GDDR6, 12Gbps GDDR6 frequency, 1,590MHz boost clock, etc.

Our best guess here is that Nvidia is recycling TU106 dies that weren’t quite good enough for higher performing SKUs, while also cleaning house ahead of a new generation of GPUs. Nvidia is likely disabling all of the RT and Tensor cores, paring it down and repackaging it as the TU106-125. This also allows Nvidia to extract the most profit per wafer for its Turing chips, as not all of them are going to bin the same -- chips around the perimeter of the wafer, for instance.

The company has finally issued a rather hollow apology, for whatever that’s worth. The apology comes from Nintendo President Shuntaro Furukawa, who simply apologized for the “inconvenience.” Although, due to the current class action lawsuit, Furukawa noted that he was unable to comment on specifics.

As of June 30th, the Keep Americans Connected Pledge, created by the FCC, officially expired. What this means to most people is that most ISPs will begin trotting-out their arbitrary data caps again, and probably eagerly so.

The Keep Americans Connected Pledge was the FCC’s response to the pandemic in regards to internet and telephone connectivity, which saw a large swath of the country staying at home, and as a result, working, learning, and consuming more entertainment from home. The Keep Americans Connected Pledge ‘asked’ ISPs to pledge not to disconnect services and relax their data usage limits. Most ISPs took part of this pledge and agreed to remove data caps temporarily, and vowed to not disconnect customers for their inability to pay. Some ISPs adhered to this pledge better than others. Verizon has been one that hasn’t really stuck to it.

So far, the FCC has not announced any intentions to extend the pledge, despite the surging pandemic. Additionally, many ISPs have not indicated that they will extend the ‘benefits’ provided under the pledge, meaning many will now start charging for data overage, and attempting to collect payment for outstanding balances.

As PCWorld notes, some ISPs like Cox -- who’s been our favorite ISP lately -- have already returned to data caps. AT&T is promising to waive overage charges for customers with certain plans, like AT&T Fiber. PCWorld has also curated a great list of most major ISPs and their current stance on data caps, overage fees, etc.

Team has outed a new PCIe 4.0, NVMe-based SSD with an interesting bit of marketing. And you all know how much we love marketing here at GN.

“The use of aerospace ceramic composite cooling materials not only provides excellent heat dissipation, but also reduces heat by 18% when the case is equipped with a fan,” says Team in its press release. There’s some more of that marketing math we love to see.

As for more realistic specs, the Cardea Ceramic C440 is a NVMe PCIe Gen4 x4 1TB drive. The SSD is of the M.2 variety, and we’re assuming that's the 2280 form factor, but Team didn’t specify. It also uses the NVMe 1.3 protocol, and while it’s PCIe Gen4, it should be backwards compatible with a PCIe Gen3 M.2 slot. As for speeds, T-Force is advertising sequential read/write speeds of 5,000 and 4,400 MB/s, respectively. As for IOPS, Team also claims a read/write speed of 750K/750K IOPS.