After the wild success of Call of Duty 4: Modern Warfare, Infinity Ward decided to give the fans what they wanted - a sequel made by them, not by some sub-par developer (I'm looking at YOU, Treyarch).  Recently two trailers have caught our attention here at GN, one of them reveals a lot of in-game details as sort of easter eggs in the cinematic.  Perks, primary plot points, and other details can be found in the video below, where an unnamed youtuber makes very legitimate explanations of the Modern Warfare teaser, revealing perks and other hidden things within the video.  While we don't necessarily agree with all of his conclusions, you can come to your own easily once the easter eggs are pointed out.

a new MW2 commercial was aired on TV recently, which we took the liberty to upload for your viewing pleasure.  All you gamers out there drooling on your keyboards, wait no longer!  The commercial (posted below) states that the game will have its world premiere at the Eastern Conference Finals on May 24th.

*The first scene shows helicopters taking the (presumed) player to an isolated icy-cold island, with some major smoking problems.

*A bomber/fighter plane flies over the helicopter that the camera is in, alluding to more airstriking fun.

*Some hand-to-hand combat takes place in the foreground, in the background a jet explodes (most likely C4).  The fighting is most likely cinematic and not gameplay (I hope we are proven wrong).

*At 00:06, in the bottom right, it is clear that another diver is giving the "A-OK" sign, and has a fancy watch on! The divers seem to be escorting something, which has another diver in some sort of passenger/"driver" seat.

*The scene breaks to a snowmobile chase, where one vehicle flips into the player's camera.  Looks like we'll be doing some Bond-style fighting.

*Now we are back in the air, but this time from the view of a camera attached to a missle/bomb (top: "Camera:Shellfire **ODA**").  The weapon hits an enemy.

Those of you pre-ordering Modern Warfare 2, it's due-date is 11.10.09, and it now comes with a fancy signed poster from Infinity Ward.  Sounds like it's worth the pre-order.  Check it out: 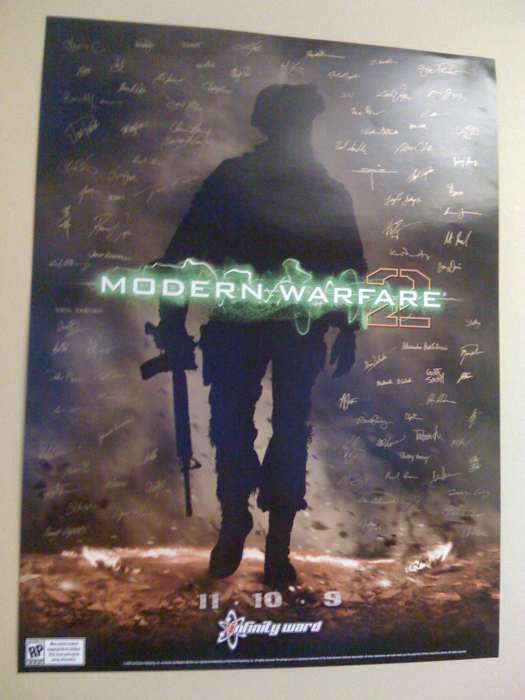 Hopefully that'll tide us over until May 24th!  Check back for more Modern Warfare news!