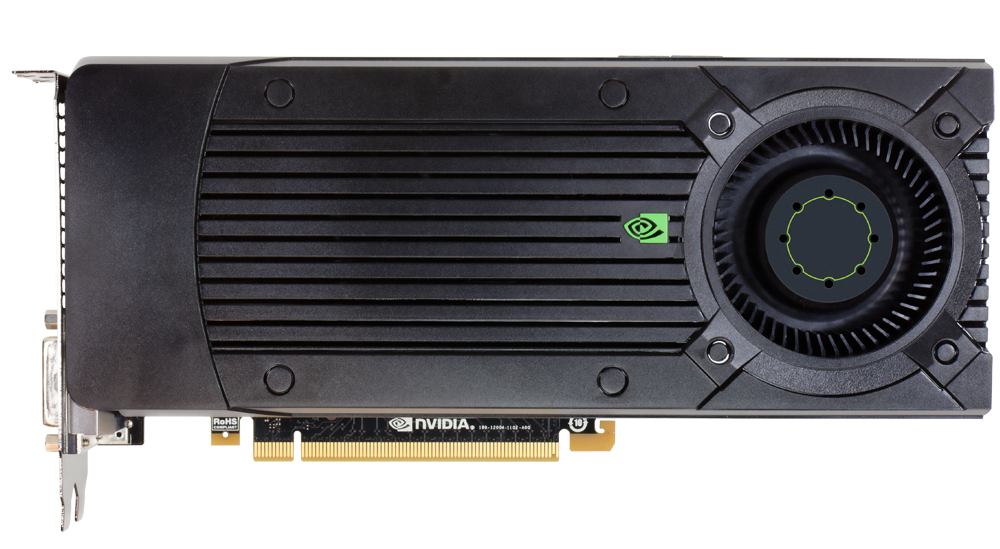 A few days before all this PAX East craziness, we were able to join nVidia in a press conference about their new mid-range GPU; the news was under embargo until just now, but for all our mid-range and entry-level system builders, now's the time to listen up - your GPU selection may be impacted by the release.

With the nVidia GTX 650 Ti Boost specs officially announced, we're here to briefly overview the new GPU and its theoretical performance against AMD's 7850 in the sub-$200 market.

AMD has historically always dominated the sub-$200 market - period. This has been true going back to the 4000 series (and possibly even before), and even on GN, we've been recommending 7850s (and before them, 6850s) for most systems below the $650-$700 price-point. At PAX East, nVidia acknowledged this disadvantage and noted that they don't want it to last any longer -- "the gap is closing," they told us, "we have the mobility to price competitively." And to some degree, it's absolutely true: AMD's market cap (~$1.79B) is 4x smaller than nVidia's (~$7.64B) and 58x smaller than Intel's (~$104.6B). That's not to say that the company is going away any time soon, just that they're smaller, split between two very cost-prohibitive markets of computing, and against two of the largest companies in the hardware engineering industry. 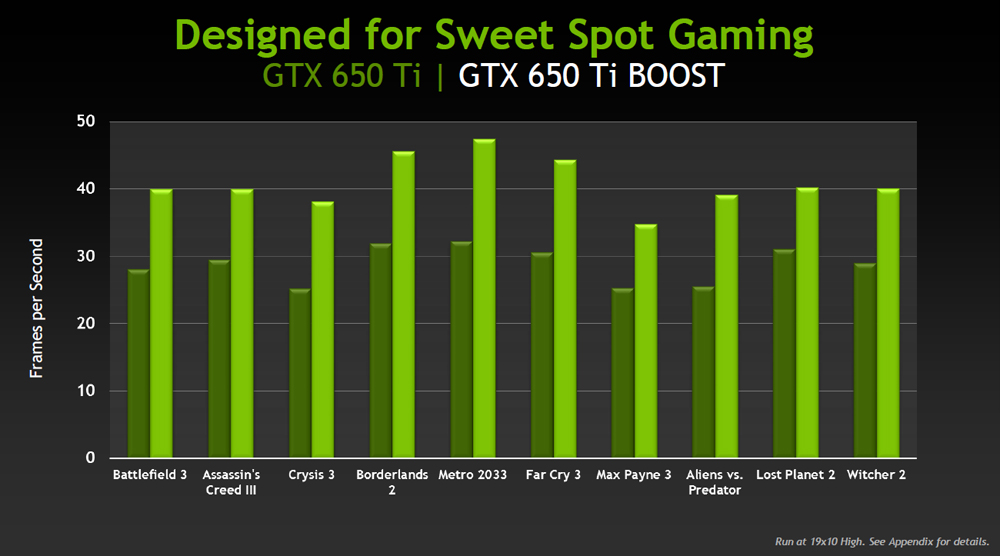 NVidia has a company to support, and their monetary stability gives them room to cut into margins to take away some of that low-end market. Here's what we're looking at for the 650 Ti Boost:

UPDATE: The official prices have been announced, along with more detailed specs. You can find both of these below:

The new card has the same CUDA core-count as the original GTX 650 Ti, but the biggest gains will be found in the presence of a 1033MHz Boost clock (not available in cards below the 660 prior to today) and higher core clock. These two primary advancements put the 650 Ti Boost comfortably between the 650 Ti and 660, and though we weren't given a price while at PAX East, we do know it will be sub-$200 (so probably $199, if we're realistic). Other than these, the 650 Ti Boost will be utilizing Boost 1.0 technology and allow for SLI bridging, which the regular 650 and 650 Ti did not have/allow.

"Turning down the game [settings] to low or medium just doesn't feel good, GeForce GPU Product Manager Chris Daniel told us, "turning it up to extreme requires an expensive GPU [...] We want to optimize for the gamer."

And that was nVidia's key phrase for the conference: Optimizing for the gamer. They want a better "pruduct for the core gamer," and realized that the key price-point is below $200, so here we have the "Boost" suffix added to the original 650 Ti, a few added features, and some FPS increases in-hand with these upgrades. NVidia's internal testing (we have not yet validated) resulted in the following: 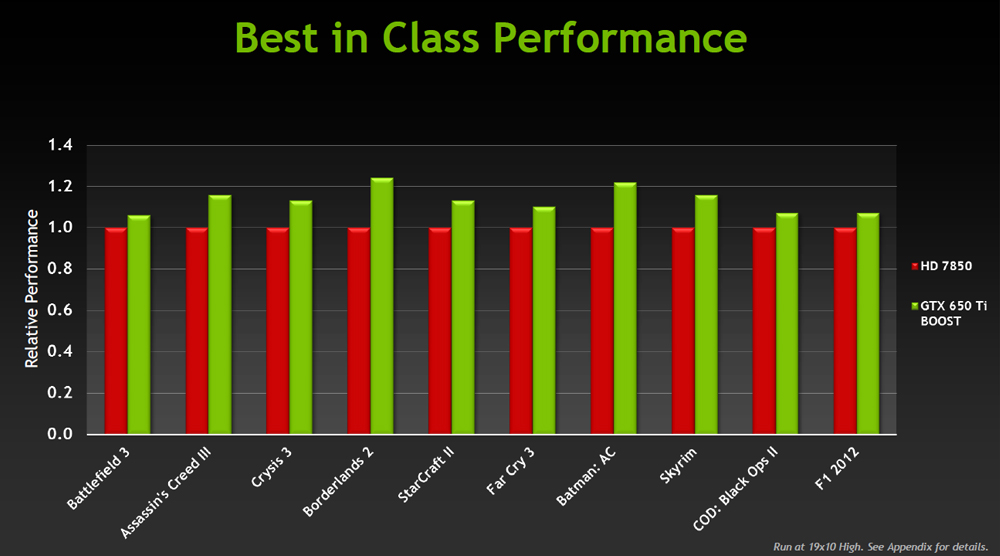 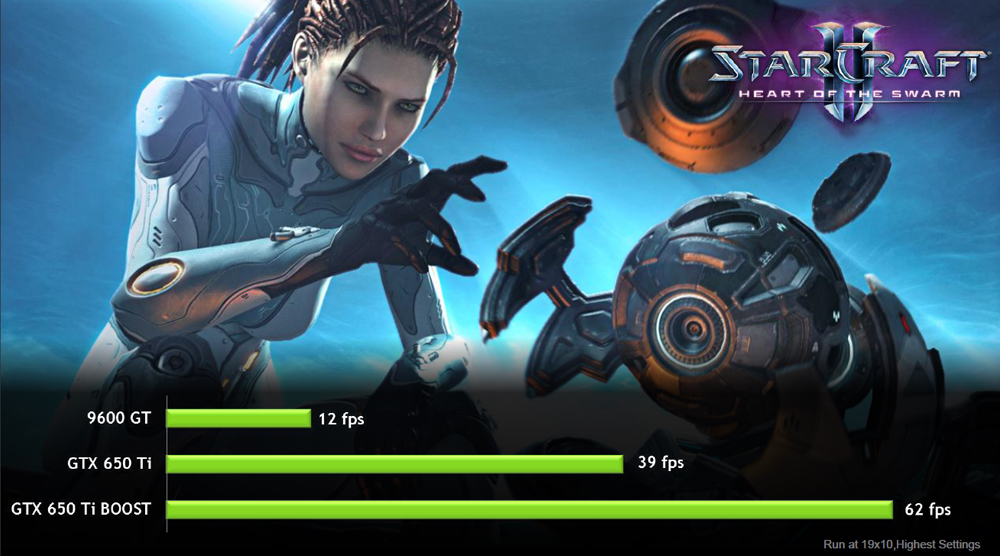 And here is the appendix that is referenced in the footnote: 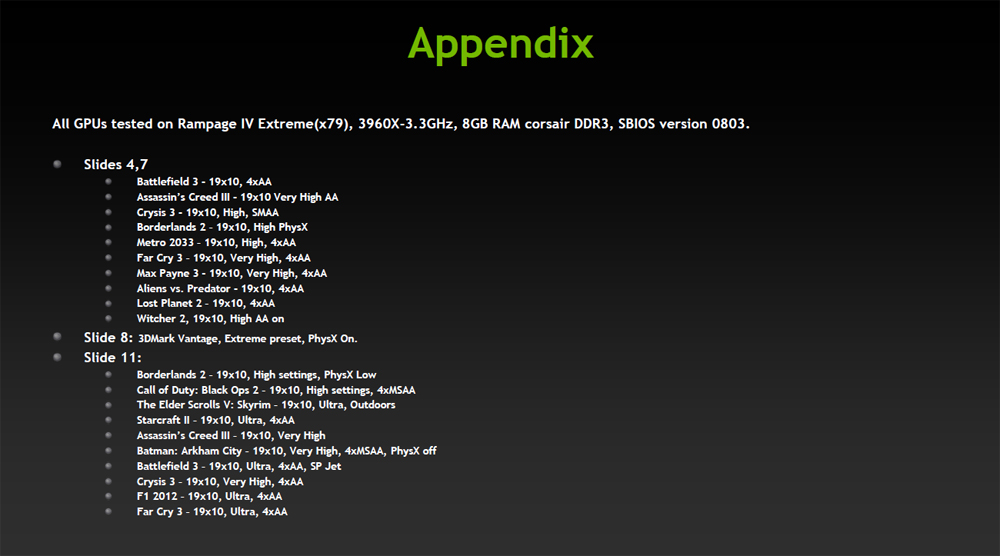 As it stands now, we know that ASUS, PNY, EVGA, MSI, Zotac, and Galaxy will have cards available shortly; PNY noted that they're getting some of their first product samples in this week, so we should be seeing them all on the market almost immediately. We've been told that all of the cards should be shipping with $75 of in-game currency for the likes of Hawken, Planetside 2, and World of Tanks.

What does this mean for gaming? NVidia claims that it's a 6x performance increase ... over the 9600 GT, so that's not really relevant information; what's a bit more relevant, though, is that nVidia's testing suggests a ~10% improvement over AMD's 7850 in pure FPS.

We haven't tested the card yet, and by now, you all know that I'm hesitant to believe anyone's data other than my own. I intend to test a couple different variants of the 650 Ti Boost against existing, low-end nVidia cards and AMD's 7850 (ideally both 2GB and 1GB versions). From what we've been told by nVidia, the GTX 650 Ti Boost vs. an AMD HD 7850 should result in slight wins for nVidia across the board, but we'll validate as soon as possible. This will fluctuate heavily based upon game settings, of course, but our test methodology should account for most variations.