Valve has certainly proven their dedication to their games and gamers, if not through the counter-strike series and Left 4 Dead, definitely through Team Fortress 2.  Granted, they never finished the damn game in the first place, they're finally getting close.  The slowly released updates are almost good, in that they make players who have gotten bored or "needed a break" to rush back into the rather cartoony fray.  This time, though, the patch is for players who float around spawn scoped all match -

The TF2 developers plan to release news regarding the patch all week, and the estimated release date is within a week of this posting.  Recently, Valve revealed a new sniper unlockable weapon - A Bow. 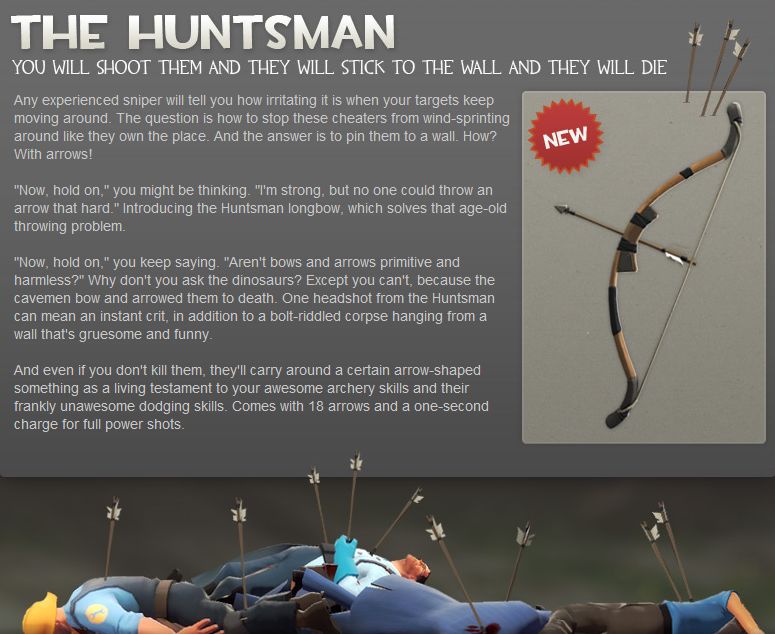 That's right.  The "Huntsman" equipment looks as though it will take place of the Sniper Rifle (in the same way the Force-a-Nature takes place of the Scout's base shotgun).  The new weapon enables the sniper to actually pin opponents to walls, and all headshots are automatically crits... who needs Kritzkrieg anyway?  So far, it has been stated that the bow will have a full one-second charge powershot, 18 arrows, and a brand new kill effect.  Valve wittily wrote, "Any experienced sniper will tell you how irritating it is when your targets keep moving around.  The question is how to stop these cheaters from wind-sprinting around like they own the place. And the answer is to pin them to a wall. How? With arrows!" Valve went further to include, "You will shoot them and they will stick to the wall and they will die."

Valve has yet to reveal further details on a previously announced update including new maps, achievements, and weapons, but they will be here as always.  For now, look forward to the sniper update within the next week or so!