It's easy to think the 780 Ti would outperform Titan based purely on the core count differential, but it's not a linear comparison, and I wish those reporting on the cards would stop perpetuating this conception.

The fact is that the 780 Ti is not meant to replace Titan. Titan was, technically, never meant to be a gaming card -- it's built for high-end developers, CUDA programmers, scientists, physicists, and anyone rendering highly-complex simulated models. This is evidenced by Titan's presence in the namesake Titan Super Computer.

NVidia also claims to have upped the ante on overclocking with the 780 Ti over its 780 and Titan predecessors. Because overvolting and overclocking the GPU's clockrate imbalances power draw from the 8-pin, 6-pin, and PCI-e power sources, OCing the 780 and Titan has proven less stable than we'd like. The 780 Ti will use "Power Balancing" to better normalize the current/wattage drawn from each source of power, theoretically improving stability and reducing voltage drops to the GPU. In turn, this increases the overall overclocking stability and cap of the 780 Ti, meaning that we should see higher deltas between OC'd and non-OC'd cards with the 780 Ti.

Back when Fermi launched, nVidia became the center of industry-wide criticism for its high-thermal, high-TDP, high-noise GTX 480; since then, the company has worked to mitigate thermals and power draw as much as reasonably possible. In continued effort to do this, the GTX 780 Ti's GK110 uses a 533mm^2 silicon die, approximately 78mm^2 larger than AMD's R9-290X, theoretically allowing better thermal dissipation over a larger surface area. This is because the thermal density (the amount of power per square millimeter, or W/mm^2 of the die) of the 780 Ti is significantly lower than the 290X, which has a smaller overall die area and a higher overall power-draw (290W TDP vs. 250W TDP).

And, actually, that was a large part of nVidia's presentation: A direct battle against AMD's R9-290X, which has recently made major waves in the gaming GPU market. To interject my opinion here, I don't really think it's a fair comparison to make: The 290X might be AMD's current flagship device, but the 780 Ti is in an entirely different price bracket from the 290X. Take all these comparisons under that consideration. NVidia put together this "raw horsepower" chart, showing direct comparisons to the 290X on a specifications-level (note: Load performance calculated at 1080p; the 290X will perform closer at higher resolutions): 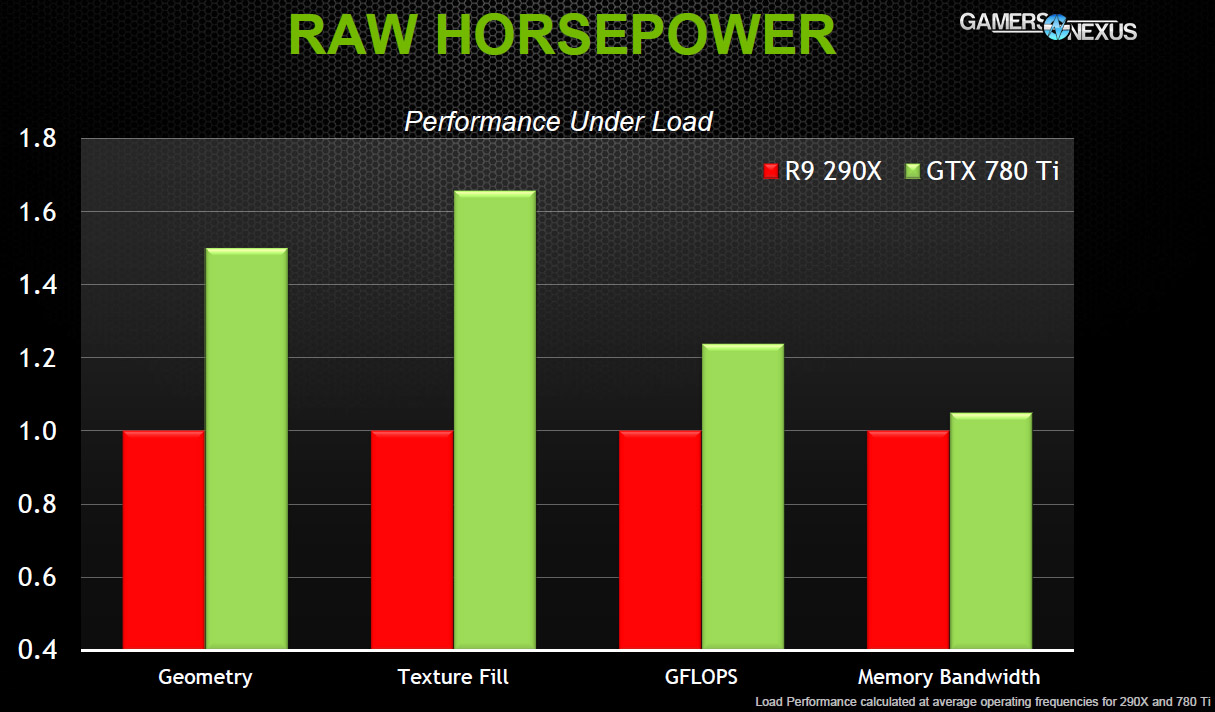 Although we haven't personally tested the 780 Ti yet, nVidia's internal benchmarks can be found below; take these with a grain of salt, but do keep in mind that the benchmarks conducted by either company (AMD & NVidia) are generally pretty fair. Then again, the 290X is significantly cheaper than the 780 Ti, so it's not exactly an immediately linear comparison between price-points. 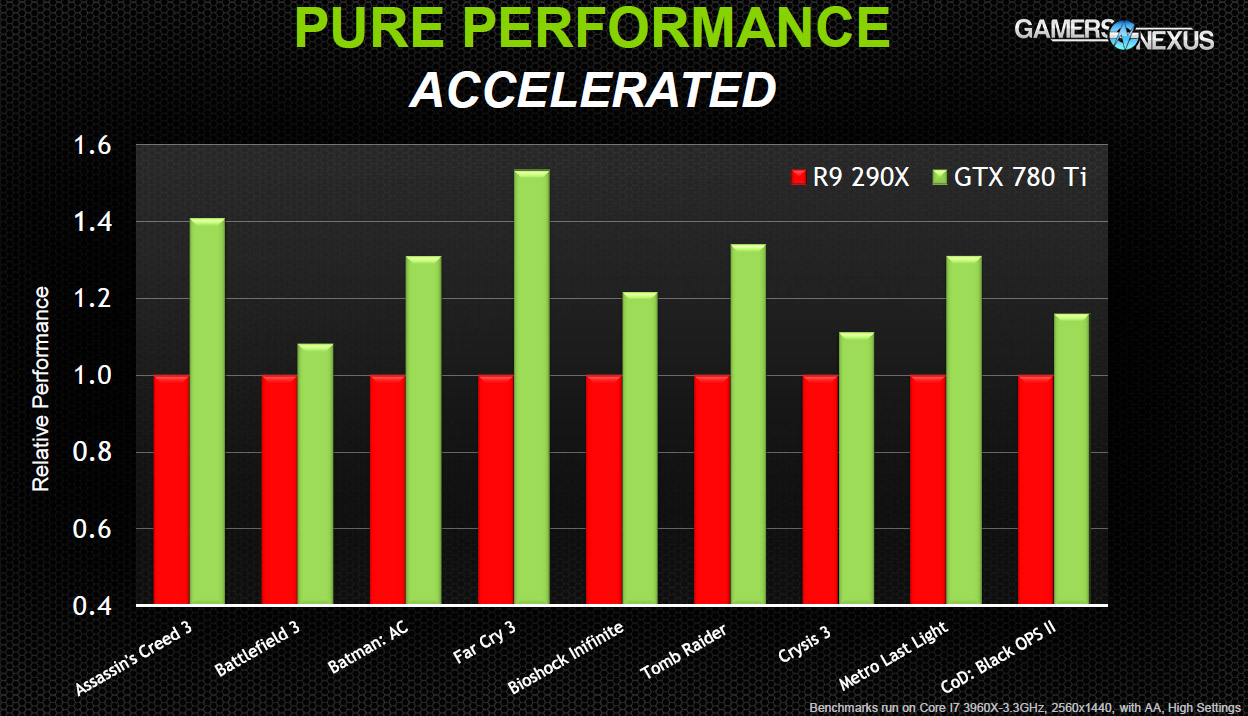 NVidia noted that the 780 Ti runs Assassin's Creed 4 on maximum settings @ 4K resolutions with 32FPS, and the new Batman game runs the same max/4K settings with a 46FPS framerate.

In addition to these graphics, nVidia claims that the 780 Ti outperforms the 290X by 26% in Battlefield 4 (47FPS vs. 38FPS, respectively), which AMD has closely supported in development. The caveat here, though, is that nVidia ran this test with the 290X on "quiet" mode, so it's tough to get an idea of the performance with the 290X at full bore. At worst, they'll perform about equally. At best, the 780 Ti should outperform the 290X marginally. The BF4 tests were run at 2560x1600, 4xAA/16xAF with Dx11 and "Ultra Quality" settings.

If you have any questions about modern GPU choices, drop a comment below or post on our forums!