If this leaked slide is accurate and trustworthy, then it seems that AMD may be taking to the same course: Focus on a continuing merger of CPUs and GPUs onto the same silicon, promoting the APU more heavily in their lineup.

Let's talk about this slide. 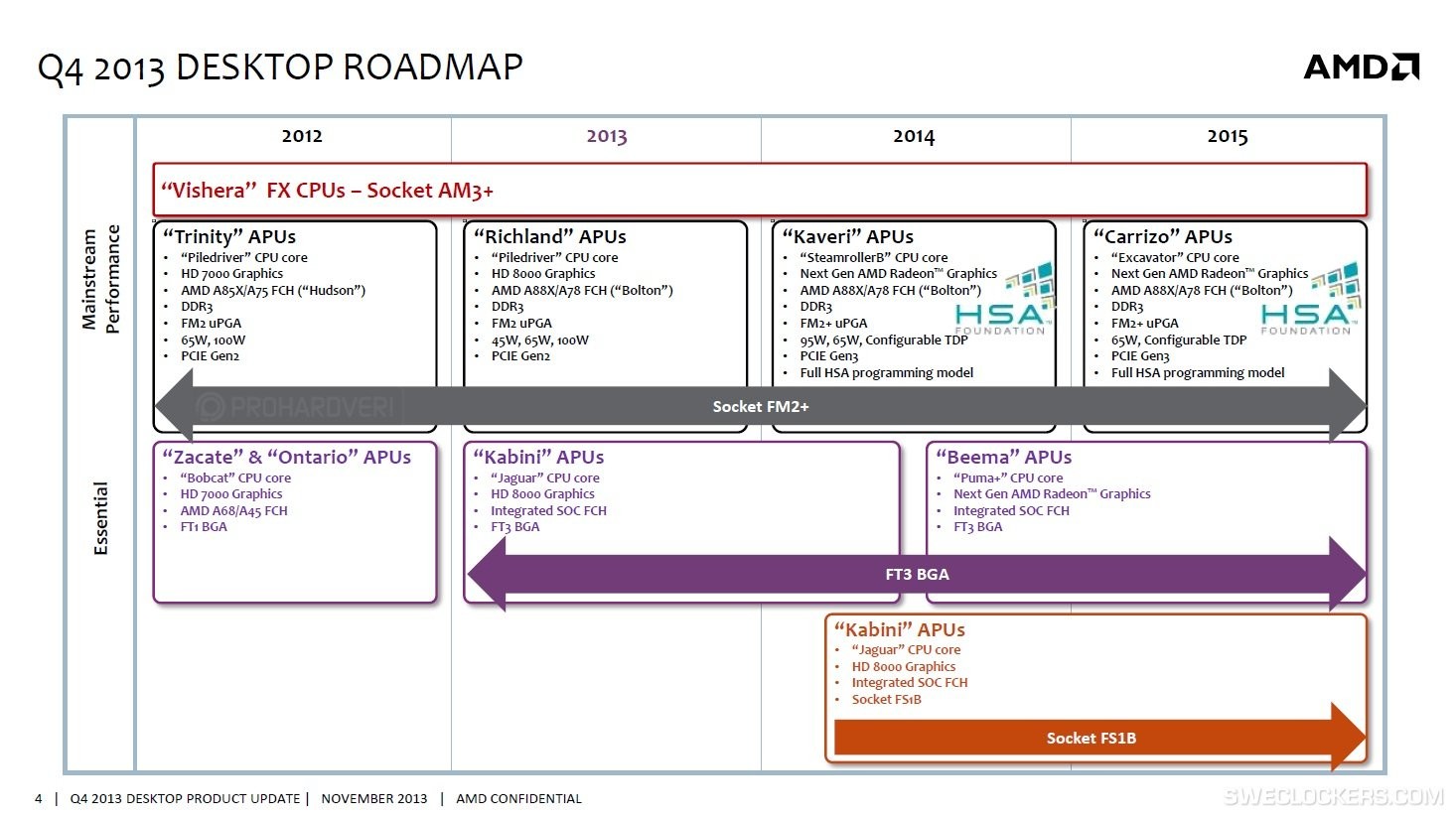 Leaked by "ProHardver.hu," AMD's alleged Q4 2013 Desktop Roadmap seems to indicate that the current Vishera ("Piledriver") FX platform will continue in its present state through 2015, at which point the future becomes unsure. It's generally unheard of for a platform to live so long without knowing its successor, leading to a lot of industry stipulation on the death of the FX line and the AM3+ socket.

It's Not The End of the World - Here's Why

Let's assume that the slide is accurate, that the stipulation of EOL for AM3+ and FX is correct, and that AMD has some sort of plan here.

AM3+ has been around for several generations now and is beginning to show its age. The chipset architecture is dated -- it doesn't even have native USB3 support -- and the FX line has underperformed for several years now. The FM2+ socket used by AMD's APUs is more modernized, offers features from this generation, and is more ready to deal with the advancing market.

As for the FX CPUs: Yes, packing all of our processing power into the CPU component of a silicon die is certainly advantageous on a pure processing level, but AMD hasn't been able to compete for generations now. Intel's had an objective performance lead in the mid-range and high-end markets since their Q-series Core CPUs, with Nehalem's 2009 launch only widening that gap. As much as everyone loves an underdog, as fun as AMD is to overclock (Intel is, let's be honest, boring as an enthusiast), well-wishing won't make a company succeed. FX just couldn't profit in a means that justified the further time investment of AMD's limited engineering staff, and so we see them migrated to other departments of the organization. Again, we're assuming the slide is legitimate.

None of this is inherently a bad thing. In fact, although AMD would be forfeiting the high-end market, it's apparent that they've decided their resources are best invested elsewhere. AMD is small. They've got a market cap just above $1.5B, meanwhile their two competitors, Intel and NVidia, rest firmly at $118B and $9B. Dedicating their more limited staff (~9900 total employees) to fewer product lines makes sense.

Besides, from a terminological perspective, I think a lot of this entire discussion has been blown out of proportion by internet speculation. Had Intel called their i-series CPUs "APUs" instead, we'd see something very similar from them: A discontinuation of the enthusiast-class CPU without IGP components. Intel's IB-E and SB-E CPUs would be all that's left, in terms of pure CPUs.

So let's say AMD leaves the Enthusiast market. They're keeping the Athlon CPUs and A-series APUs alive; Athlon will represent the pure CPU marketplace -- they basically use the same die as the APUs, but have the GPU component disabled. This makes them more affordable to the entry-level/budget users. The APUs will be advanced by Kaveri and Carrizo architectures through 2014 and 2015, operating on SteamrollerB and Excavator, respectively. This holds down the upper-spectrum of budget-class builds. It's also possible that we'll see AMD bringing 6-core processors to APUs in that time, and if they reintroduce L3 cache to the APU, AMD will be in a position to more seriously compete with Intel in the non-Enthusiast market.

AMD's APU already outperforms Intel's IGP solution on the GPU front, though their processing power is lacking; if Kaveri and Carrizo go over well, we could see bigger jumps in capabilities than over Trinity exhibited. It's true that the FX line -- clock-for-clock, on a processing level -- outperformed AMD's APUs even when priced similarly, but that's just not where the future of AMD lies.

"The Future is Fusion"

Several years ago saw the somewhat silent emergence and disappearance of AMD's originally-aggressive ad campaign, stating "The Future is Fusion." This is exactly what they meant. The world is moving away from pure CPUs and toward fusion options, with the last haven for independent CPUs remaining in server processors and (for now, at least) IB-E/SB-E X-class CPUs. As a quick aside, I figure my next system will feature a server processor (Opteron or Xeon), and if you're an enthusiast, it might be worth looking into for your own builds.

One of the major differences with AMD's APUs is that they're trying to leverage the integrated graphics component of the APU in all systems -- even those with discrete video configurations. This is done through Hybrid Graphics, which theoretically sends graphics processing to both the GPU and APU based upon demand and load. We won't dive too deep into that in this post, but the end-result is a quasi-CrossFire solution that will actually utilize the GPU component of the APU, unlike Intel's IGPs, which go nearly completely unused when the host system's GPU severely outpowers it.

At the end of the day, I don't think this leak (assuming it's legitimate) is anything to panic about. If it's true, well, it sort of sucks that FX will be going away -- I won't lie about that -- especially given the level of room for high (and fun) overclocks. That said, I'd rather see AMD focus on something they're good at, and then maybe revisit FX-like CPUs once they've got a better grip on the market and have a more stabilized presence.