Similarly, Twitch's users tend to visit 5 pages per session -- quite a lot for any website -- up 7% over last year.

According to Twitch's official internal metrics, here are the key stats you need to know about the network:

Additionally, the network notes that it now has 900,000 unique streamers per month - a 3x growth over the previous year. Of its total broadcasters, the website notes that 5100 have officially partnered with Twitch for ad serving.

On average, each viewer consumes 106 minutes of video content on Twitch daily. 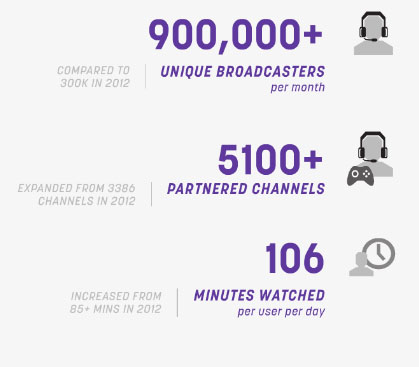 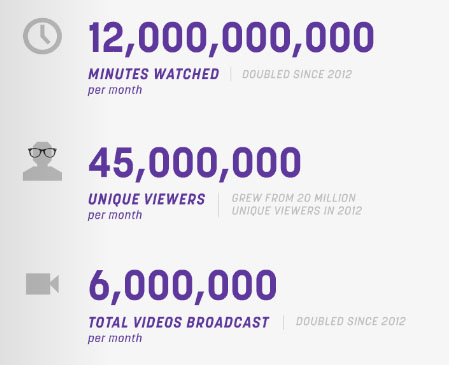 The website further claims that "68% [of its audience] have decreased watching TV to focus their time on game entertainment." Twitch notes that its weekly viewer count exceeds those of Hulu, Vevo, and (not that this is impressive in any way) MTV; it further states that its thousands of prime-time viewers surpass traditional cable networks, like AMC, TNT, MTV, and SyFy.

Twitch's core audience consists (average) of 21-year-old viewers, with a heavy skew (76%) between 18 and 49 years old. Twitch claims that a large portion of its demographic "hasn't subscribed to cable in years, if ever." Core usage stats include: 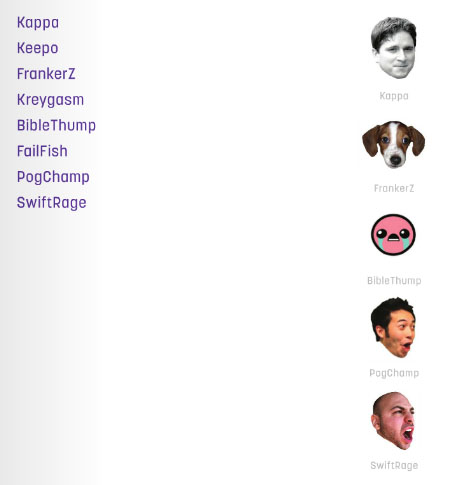 The most popular emoticons in Twitch chat.

Twitch Statistics: The Most Played & Popular Games on Twitch

Somewhat unsurprisingly, Minecraft and MOBAs have retained their explosive growth over the last year. Minecraft boasts 10,000 daily players broadcasting their gameplay, with one of the biggest events of the year (Nexus Minecraft Server launch) drawing 50,000 concurrent users. For comparison reasons, StarCraft 2's WCS Finals achieved over 150,000 concurrent viewers at its peak - one of the game's most popular events since its launch. 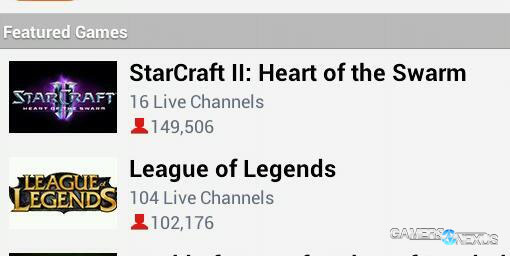 MOBAs are unarguably the single biggest draw to Twitch these days, although SC2 was largely responsible for kick-starting the website. League of Legends has grown over 250% in minutes consumed over the last year, with DOTA 2 laying claim to the largest gap-up in viewer count percentage, standing at 508% growth.

Twitch reports that StarCraft 2 shows "no sign of slowing down" (although that seems questionable) on the site and that WoW content consumption/creation continues to grow despite the game's population decline.

If you're interested in getting into streaming yourself, you can read about the hardware requirements of streaming in one of our previous high-end system builds. Note that this system is now deprecated (new hardware since its publication), but the core principles remain the same. Check our PC builds page for systems that are targeted for streaming.