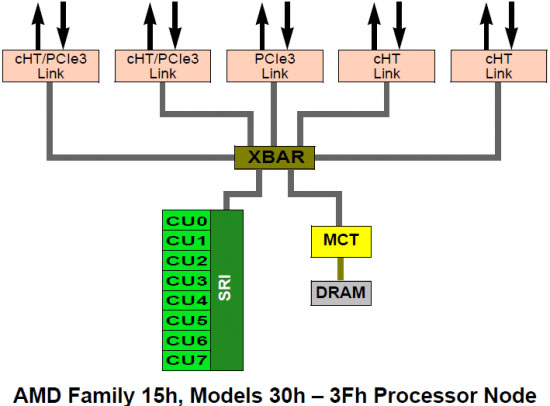 The name isn't exactly pleasant to say, but AMD's recently released software developer document details the lower-level functions of their impending "Family 15h model 30h - 3Fh" CPU; the CPU, perhaps to the delight of AMD enthusiasts everywhere, does not appear to feature a significant GPU component at this time (though there is indication of a GPU component).

AMD's new sixteen-core chip features eight compute nodes (effectively 'Bulldozer' modules), and because each one is a dual-core unit, we see a total of 16 CPU cores by AMD's definition. This is a new direction from AMD's 16-core Opteron server processors that presently exist -- the current Opteron units employ 2x8-core CPUs, whereas the 15h Model 30h-3Fh will achieve the core-count on a single die. The new CPU will be built on a single silicon die, seemingly dedicating the majority of its die space to the CPU component. AMD has historically placed heavier emphasis on INT units over FPUs, so it's reasonable to expect that the trend continues here.

Perhaps most noteworthy is AMD's movement of the PCI-e 3.0 controller to the CPU, which aims to significantly reduce operating latency between the PCI-e controller (and its interfaces) and the CPU. The Family 15h CPU will consist of five I/O links: 1xPCI-e 3.0, 2xHyperTransport, 2x PCI-e 3.0 or coherent HyperTransport (which enables symmetric multiprocessing, something AMD emphasized at CES). 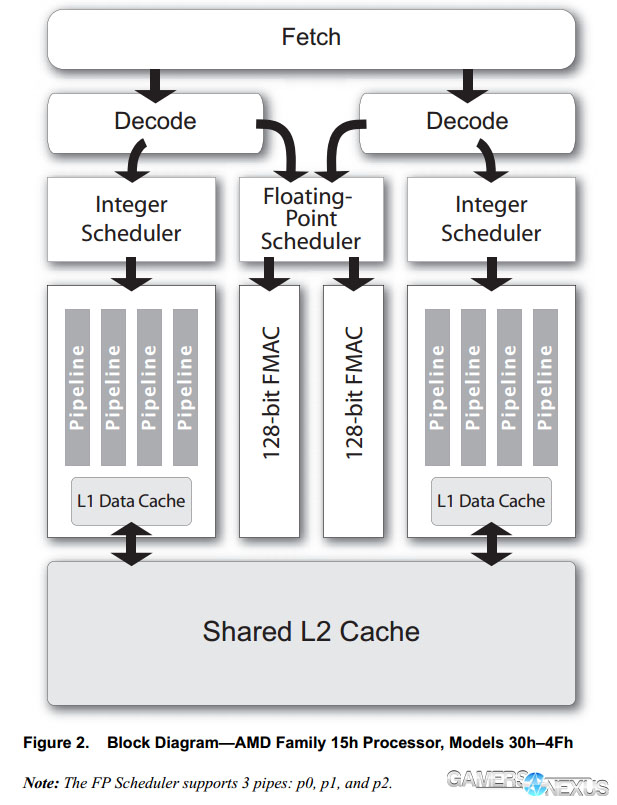 The eight modules are joined by System Request Interface (SRI), which AMD uses to bypass the need for a standard bus and further reduce latency. This is part of HyperTransport's basic framework. The HyperTransport links feed into a single crossbar switch (XBAR), a standard logic switch that enables multiple inputs to be output in matrix format (see above image).

AMD's product data sheet seems to indicate DDR3 SDRAM support, which I find a bit odd -- I'd suspect it will change to multi-channel DDR4 before fabrication (it is likely that the product data sheet is outdated or obfuscated for NDA reasons). The same product data sheet demarcates the enablement of an integrated graphics component, stating that it offers a "discrete-level graphics processor embedded alongside the x86 CPU complex."

What Does this Mean For Me? Will FX Live On?

We've already beat the dead horse that AMD will likely retain its FX branding to some degree, given its success in the market; in fact, AMD told us at CES that "the FX line is still one of our most successful CPU families" for system builders. The Opteron server chips will continue to live for a while longer (and are looking to go the APU route, too), but this new unit will definitely serve as a server CPU. What's interesting for our gaming and enthusiast audience, though, is that the architecture can be taken and repurposed for a potential Enthusiast-class FX chip (or Phenom, or whatever they brand it as).

As it stands now, there's no doubt that this is a server component, but I do have a pretty strong inclination that AMD will repurpose the CPU for high-end consumer desktop use.

It looks like the Family 15h CPU is at least one year out, but more reasonably two years.

AMD recently changed its official hardware roadmaps to only indicate one year into the future, so everything is still subject to change.