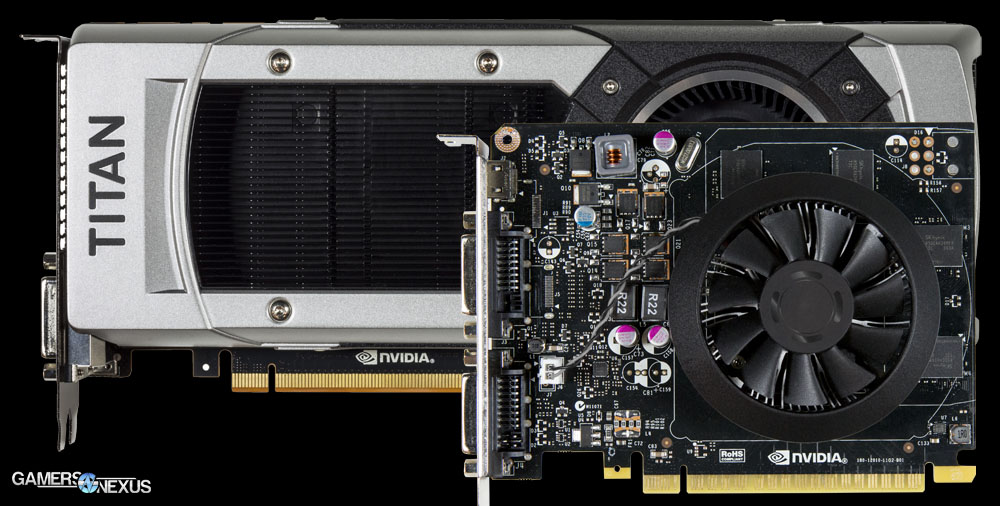 NVIDIA's GTX 750 Ti has been rumored for about a month now, and as of today, most of those rumors are confirmed. Today sees the announcement of NVIDIA's Maxwell GTX 750 Ti, GTX 750, and TITAN Black specs and internal benchmarks; most interestingly, the 750 Ti and 750 introduce potentially game-changing graphics processing to low-TDP, passively-cooled HTPCs.

Let's start with the specs table, then move to the block diagrams and unique implementations.

Keen observers should notice two things: The new architecture is still 28nm and the new video card is not nVidia's Flagship for this generation; in past years, nVidia has launched their flagship card first, equipped with the best of their new architecture. This time around, we're getting an entry-level device first and a less advanced version of what will ultimately ship on higher-end cards. It is likely that the fab was not prepared for lower-nanometer process just yet, and as such, we're seeing the 28nm GTX 750 Ti. I would wager that this is a lead-in to smaller process GPUs in the coming months. In addition to this, the lower-end card will be in higher-demand by consumers -- especially given the market's move toward mini-computing right now (which may or may not be a trend, we'll see how Steam Machines do), and nVidia wants to capitalize on that.

The 750 Ti is meant to replace the current 650 Ti and is targeted to compete directly with AMD's Radeon R7 260X video card. The 750 is also in the same 'block' and will be replacing the 650 Ti on the low-end, but is competing more directly with AMD's R7 260. MSRP for the new units is set at:

Most noteworthy is that the new cards see the introduction of nVidia's Maxwell architecture, the replacement for Kepler that's been on the roadmap for a number of years. Maxwell is primarily focused on increasing power-to-performance efficiency. NVidia states that their 1st Generation of Maxwell GPUs (GM107, shown on the 750 cards) will increase performance per core by 35% over Kepler, which had 192 CUDA cores assigned to a single block of logic. Kepler's Streaming Multiprocessor (SM) schedules traffic for 192 CUDA cores, whereas Maxwell breaks the SM into four Control Logic blocks, with each control logic handling 32 cores (instead of a single block managing 192). 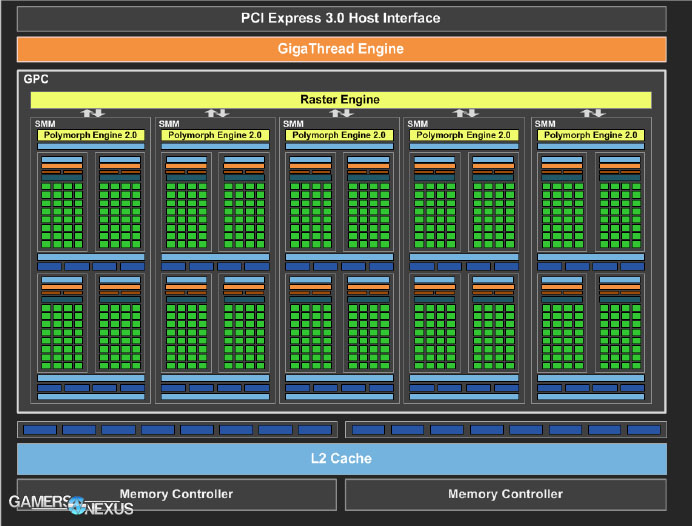 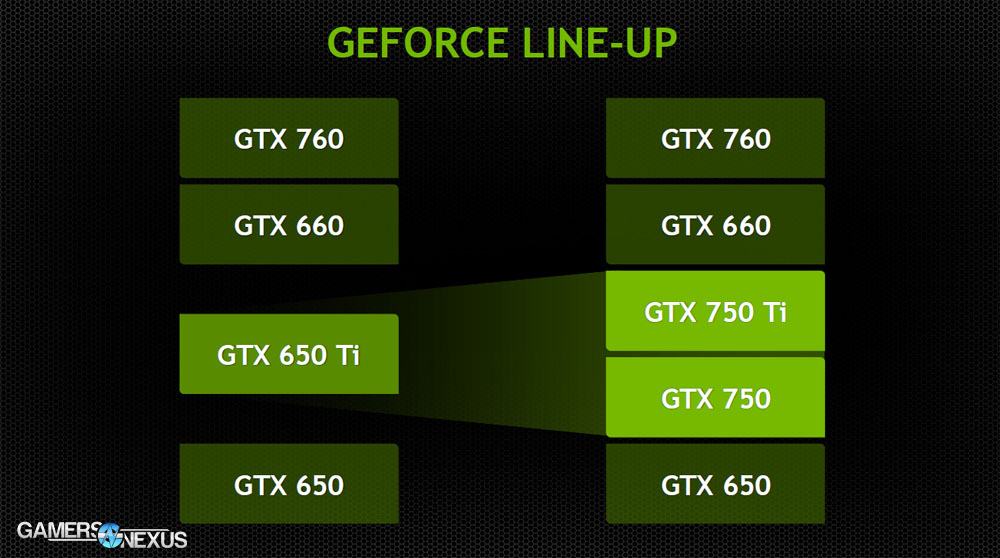 This reduces load on individual GPU components and increases overall core utilization, meaning that even though the physical gains in CUDA cores aren't what we've seen in the past, the optimization means that software will be more likely to efficiently use what it's offered. The cores will spend less time idle and more time splitting load.

NVidia said in its press conference about Maxwell:

If you're curious, the 550 Ti had a TDP of 116W, as opposed to the 750 Ti's 60W TDP. Because of the low power requirement of the new nVidia GPUs (TITAN Black notwithstanding, of course), neither the 750 nor 750 Ti require a dedicated power line from the PSU and can run off of power provided through the board. This has interesting implications for some computing applications. NVidia noted that while low-profile cards will not be immediately available, they will be on the market shortly and will likely be joined by passively-cooled versions of the 750 Ti.

If we do see a passively-cooled 750 Ti (or even 750, though to a lesser degree), it'd be the quietest, most powerful video card on the market at the price. The ideal use case scenario would likely be an HTPC or Steam Machine of some kind, where living room silence is desirable and absolute-max game settings may not be required.

From what benchmarking and nVidia show us, it looks like the 750 Ti will push medium-to-high settings on most games, depending on the game. From what we've seen of the specs, it is unlikely that our site would recommend the 750 (non-Ti) for gaming builds, as the 2GB 750 Ti will offer significantly better performance going forward. This was revealed when benchmarking Titanfall, where we saw a large performance impact from video memory capacity. I'll be following-up on Titanfall benchmarking with the 750 when both are available. 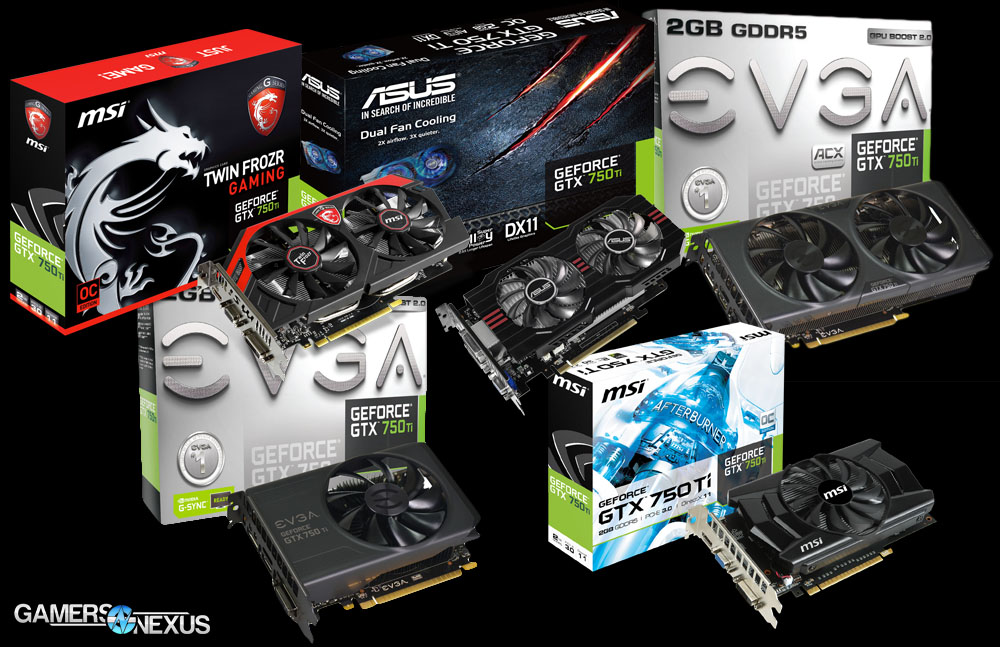 Regardless, with either video card, you're sitting at lower than 75W TDP -- bundle this with almost any modern CPU/APU (FX-9000 notwithstanding) and you can run a 300W PSU in a mini-ITX box that uses partial passive cooling. The 750 Ti should be able to push 19x10 resolution consistently at medium/high settings.

The 750 Ti features two 64-bit memory controllers to produce a 128-bit memory bus width and can be outfitted with 1GB or 2GB of memory, though we'd always recommend the $10-$20 bump for 2GB. It also continues use of Boost 2.0, meaning you'll have reasonable voltage control and OC options given the right software and aftermarket solution. NVidia notes that they've managed to overclock the reference card  from 1085MHz BCLK to 1271MHz "and beyond" by using partner OC tools.

ShadowPlay is natively supported, as with Kepler, and has a codec built into the chip to help manage the processing and encoding.

The GTX 750 is similar to the 750 Ti in its clock speeds and board variety among manufacturers, but is slightly down-classed in its GPU and memory components. NVidia sees the GTX 750 as an upgrade path for the same users who originally purchased the GTS 450, GT 640, or other similar cards (3x the performance and half the power consumption).

Finally, the GTX Titan Black is an update of the original Titan; the Black edition runs nVidia's GK180 "Atlas" chip that's found in the 780 Ti and still supports full-speed double-precision. This makes it an ideal card for developers who require double-precision calculations for intensive simulations, but as with the Titan, it is inadvisable for gaming machines as the 780 Ti will produce the same gaming performance at a lower price. You'd have to disable double-precision for gaming anyway, so might as well save the money as that's the most expensive differentiator in this GPU.

The Titan Black still ships with a 6GB frame buffer and now has 2880 CUDA cores.

The following benchmarks were performed on nVidia's test system (i7-4770K @ 3.5GHz; 1920x1080; medium settings) and presented to the press. Read these benchmarks with a grain of salt. We have video cards on the way from nVidia and will be testing them in a series of modern games, so be sure to keep an eye on our twitter / facebook / YouTube accounts for those benchmarks. 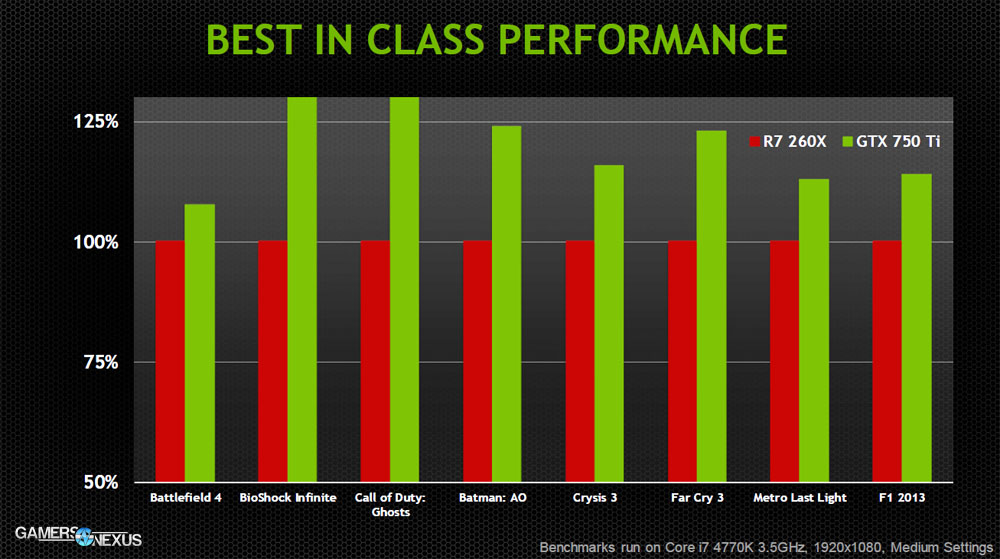 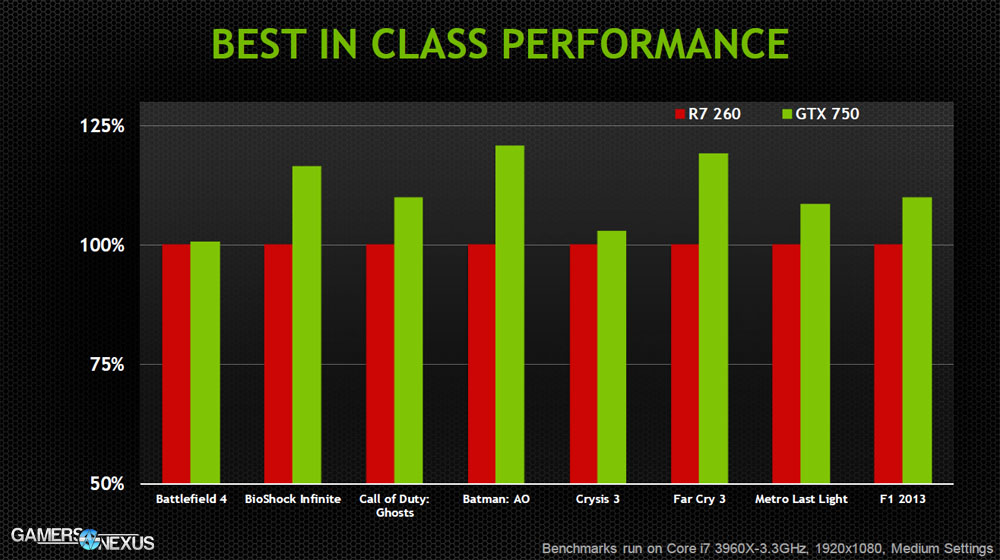 Let us know if you have any questions about either of these video cards or the Titan Black, we'll do our best to answer with more details.