Logitech (NASDAQ: LOGI) has thus far had a pristine track-record in our mouse reviews; my review of the G700s sincerely claimed the mouse to be the most comfortable, best gaming mouse I'd ever used. Contributor Patrick Lathan's look at the G500s had similarly-high praise. I've had issues with their headsets in a distant past, but haven't yet had the chance to get hands-on (heads-on?) the newer audio peripherals. In the very least, the company's mice have proven durable and formidable in the marketplace.

The new Logitech G502 Proteus Core Tunable Gaming Mouse -- yes, that's its name -- lays claim to hosting the first 12,000 DPI sensor in the industry; DPI is often used as a marketing metric, and is so-used here to some extent, but the G502 lacks any undesirable mouse acceleration, smoothing, pixel rounding, and snapping that many high-DPI mice use. These items throw off the predictability and dead-precision that a gamer demands of a high-quality mouse (acceleration is especially noticeable in RTS and FPS games). Seeing Logitech move away from such features while still achieving high speeds is refreshing.

Of most immediate interest, the mouse offers 11 total buttons: Three on the thumb grip, two additional buttons near LMB (this is one of the best spots for MMO buttons, in my testing), LMB, RMB, MMB + left/right scrolling, and a button below the scroll-wheel toggle. The button found between G9 and the scroll-wheel is a mechanical switch and does not provide input to the system. As always, all buttons are controlled through the Logitech software. The G502 can save profiles on-device, so moving to new PCs isn't an issue here. 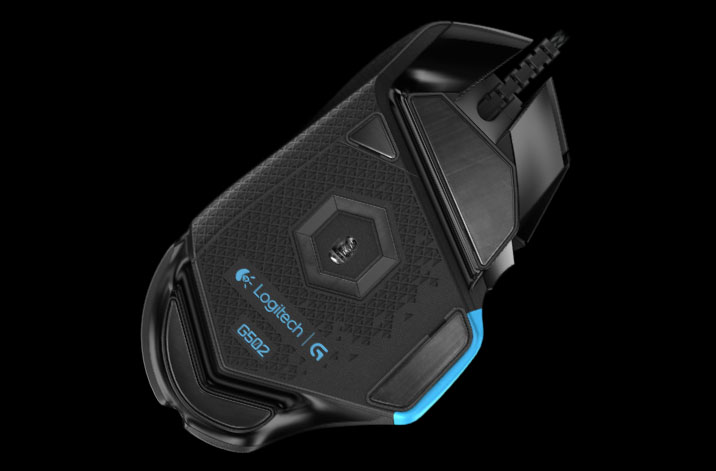 If you're wondering why 12,000 DPI (or CPI, if you prefer) has any relevance whatsoever, the counts per inch that a sensor interprets actually impacts more than pure mousing speed. A higher CPI generally is indicative of greater precision on behalf of the sensor. If your system is not interpolating mouse movements and you're running at a 1:1 ratio (counts:pixels) -- configured at 6/11 in Windows mouse settings -- a higher CPI ultimately means greater ability to pinpoint specific pixels on the screen. Further, of course, 4K resolution displays (which AMD seems to be ramping up for) will benefit more greatly from high CPI than the current 1080 marketplace.

Regardless, it's still very probable that no one will legitimately be able to control a mouse at 12,000 CPI, but if it comes with the overall sensor package (which has several other improvements), there's no reason not to add it.

The G502 continues use of Logitech's oft-marketed "Delta Zero technology," which primarily deals with the accuracy of the sensor and its interpretation of the surface. DPI can be incremented from 200 to 12,000 and the mouse can track at a rate of 300 inches per second.

Logitech has also branded the G502 as a "tuning mouse," largely a reference to its weight cartridges and software control over the speed. The mouse ships with 5x3.6g weights that can be installed in D-pad-like fashion (front, back, left, right); if you want to feel the center-of-mass more front-and-right, that can be achieved with this mouse.

The LMB/RMB plating on the G502 has been split into two individual key-plates, so LMB and RMB each have their own keys (rather than what is effectively a joint plate on most mice) to provide what Logitech claims is higher durability and satisfaction. All underlying switches are mechanical micro-switches -- I'm not entirely sure the specifics of these, but will find out when we tear our review model apart. All mice we've worked with thus far use the brown Omron switches.

Check back on Saturday and Sunday to see our follow-up coverage; we're meeting with Logitech on Saturday at PAX East, so it is highly likely that our coverage will hit the web by Sunday morning.