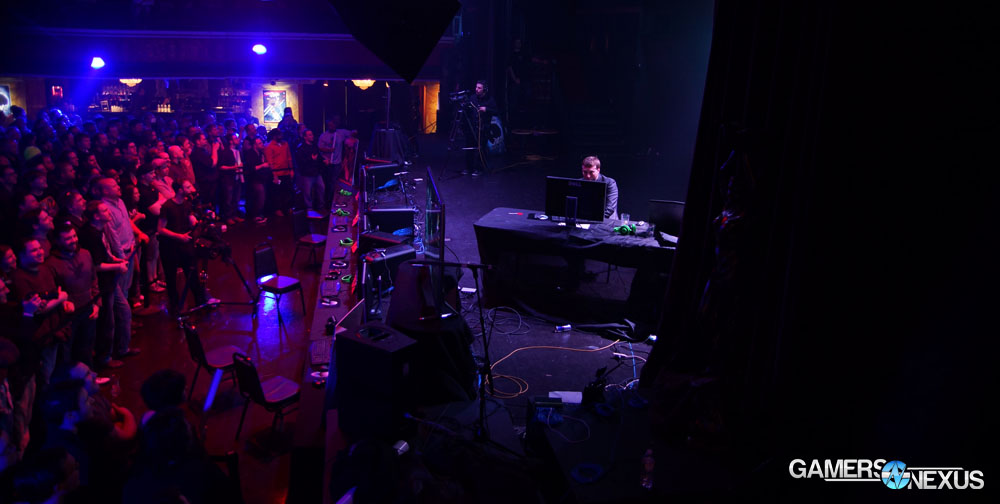 Cloud Imperium Games’ PAX East pre-show saw the unveiling of a (somewhat) functional multiplayer dogfighting module (DFM), as helmed by the game’s visionary and renowned industry veteran Chris Roberts. We were able to get an exclusive video interview in a very quick run-n-gun format after the event to collect Roberts’ thoughts on the somewhat shaky unveil, embedded below; we’ll also be covering the immediate roadmap for the dogfighting module, plans for multi-crew combat, and plans for initial FPS gameplay mechanics (boarding).

At this event, the entire focus was centered on showcasing a playable demo of the highly-anticipated Dogfighting Module, which was originally due for tentative unveil in December 2013. For the unfamiliar, Star Citizen’s $41mm funding will feed the development of the game in modular format to give players something to enjoy until the full release of the persistent universe and Squadron 42. The first module – the hangar module – has been available for some time to early backers of the game; the next major module is the dogfighting module, which will be released in stages.

To keep things lore-friendly, CIG will be branding the dogfighting modules (there will be at least three iterative releases) as an in-game “Arena Commander” simulation. The idea is that the pilots will enter simulation (in Arena Commander – a throwback to Wing Commander), where their ships and person are never actually in any real risk. This lets players get familiar with controls prior to putting things on the line.

The three iterations of Arena Commander are as follows:

As for initial maps and ships, here’s what we’ve got:

If you’ve got a ship that isn’t on the list and you do not own one on the list, Roberts stated that the module will effectively provide a temporary loaner that most closely matches your ship. Players can also expect several other smaller features built into DFM iterations, like leaderboards (mode-specific statistics, mobiGlas integration), organizations, and PvP & PvE options.

What Happened with the Unveil? What does it mean?

The launch of the DFM certainly went a bit rougher than the CIG team expected. The “Wingman” you all know from Star Citizen’s regular updates came out to inform us of a 30-minute delay due to technical issues; once that was survived, Chris’ mic was disabled for half-a-minute, and then the actual dogfighting module (after Chris piloted his ship into an asteroid when attempting to show us how pretty it was) looked excellent, but exhibited stability issues. I should note that, given the game’s very transparent philosophy and early / pre-alpha status, this should not be a huge hit to anyone’s confidence. It’s far too early to judge Star Citizen based on this unveil. Very few game developers embrace such an approach to community outreach given the risk involved in a public demonstration going wrong; as a website with several editors coming from development backgrounds, this is pretty normal for any software so early in production. There’s no reason to fear just yet.

The DFM crashed several times as a result of the patching system failing to work – this was a live demo feeding in data from remote locations, which complicated things and led to the issues. You can listen to Chris explain it in the video above.

As for what comes after the initial DFM iterations, we’re told that integration of planetside & FPS features are forthcoming and travel from Terra to Stanton will be opened up (and outlaw station visits).

Let us know if you have any questions! We’ll be talking with Chris further on Saturday.