VisionTek more recently announced the CryoVenom R9 290 Limited Edition for $650, limited to a 100 unit production run. This card is built and tested by VisionTek employees in America, where VisionTek also bumps the base clock rate to 1175MHz (950Mhz being stock 290 clocks) and a memory clock of 1450Mhz (1250Mhz being stock). VisionTek claims this card is up to 24% faster than a stock 290 due to this fairly substantial overclock. The company also tells us that this card runs at 51.6C under full load while having a noise level of 10dB, or quieter than the average library. VisionTek even provides a 1-year OC warranty that covers user overclocks of up to an additional 5% OC over their tested settings at shipping. This is very rare in the GPU market and something that hopefully becomes more widespread in the future. 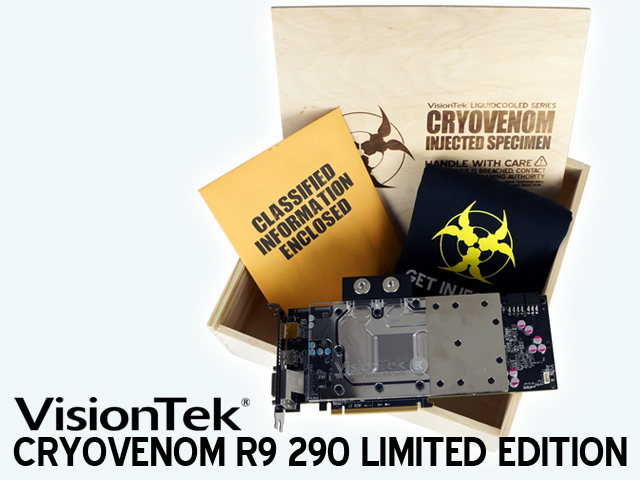 But what’s theoretically special about this card compared to the normal version is the add-ons VisionTek includes. After overclocking the GPU manually, a VisionTek employee records the certified overclock onto a hand-signed sheet so the user may input the provided GPU clock settings through Catalyst Control Center. These limited editions also include a custom wooden box with a laser-etched CryoVenom logo, a black t-shirt with the CryoVenom logo, and a free copy of Battlefield 4. VisionTek is also allowing buyers to receive a discount of 5% if using the coupon code CRYO5ALIVE at checkout (expires May 1st).

Overall, this is ultimately a refresh of VisionTek’s original CryoVenom R9 290, but it’s a welcomed surprise. It carries the hefty price of $650 compared to the regular edition at $600 (neither has anything on the $850 290X CryoVenom), but comes with a waterblock, backplate, good overclock, an OC warranty, and some fun goodies that make it more sensible. It’s good to see companies like VisionTek branching-out and putting more effort into smaller markets (like custom water-cooling) -- a trend that will hopefully continue in the future.