Perfect World Entrainment is nearing a closed beta for Western audiences of its free-to-play action MMORPG, Swordsman. The game is already live in and has been for over a year, but it's making a slow transition to the West after appropriate localization updates. Swordsman is set in the Ming dynasty and draws its inspiration from the novels of Louis Cha, a (late) popular novelist in the East. The localization team is working with the core game's writers and the Estate of Louis Cha to aid in the interpretation of the writings. According to Gabe Heiland, Product Manager at Perfect World, the game is being designed for hardcore PvP gamers who enjoy real-time combat.

We had the chance to speak with the Swordsman devs about the game's localization for Western audiences, dynamic MMO combat, F2P mechanics, and the secret usefulness of umbrellas in MMORPGs.

Swordsman is an action MMORPG that focuses on dynamic combat (more than just die rolls – actual hit-boxes are involved), character agility, and gradual progression through an underlying story arc.

The main storyline of Swordsman spotlights 10 schools (effectively disciplines/classes) with an 11th one coming in to usurp power. Your character has survived the 11th school’s warpath on his village and is now seeking revenge. Players will choose one of the 10 schools to join in order to fight the rising 11th. Just a few of the schools include:

As well as the following three that were the first to be revealed in a recent gameplay trailer.

A Look into School Abilities

Let’s take a closer look at how Swordsman distinguishes its classes from one another with these particular three schools (the below information is from the official game website):

Within schools are “stances,” stemming from which are corresponding skill trees. Players will learn skills as they progress through the game for each of these stances. It seems that players won’t have to pick just one skill tree to follow, as they're pushed to switch stances in the heat of combat to encourage more dynamic gameplay.

Swordsman features three main cities that act as quest hubs. Each school and each Guild has its own base within these cities. Guilds are divided into two types: Bandit and Escort. Joining a Guild isn't necessary, but according to Heiland, it’s encouraged as players approach the end-game.

“The most interesting quests that you can do are based out of your daily guild quests," Heiland told us, indicating further that guild quests contribute to overall guild objectives and coffers (as seen in other games with similar mechanics, like Rift).

It isn't possible to reach the level cap (40) through the main quest exclusively, so players can accelerate the process by participating in side quests of various archetypes. When pressed, the Swordsman team emphasized that the usual "fedex, escort, and kill X of Y" quests will be present, but that they're trying to keep those to a minimum. While it is an option to not follow the main quest, players may want to think twice -- there's a lot to gain in story in Swordsman's quest line, unlike a lot of other MMOs we've played. The main quest features cut scenes, explores Cha's novels, and as Heiland commented, is like playing through "the character's own kung-fu movie." Some of the quests are particularly memorable; one quest mentioned by Heiland has players set up traps to help an NPC cheat in a race -- something a bit refreshing over the usual escort side quests -- while another has players fighting a drunken swordsman's monkey. Yeah.

Active combat is used in Swordsman rather than the traditional die roll. Combat encourages active blocking, dodging, jumps, triple-jumps, in-air dodging, and counter mechanics. Combat takes place in PvE and PvP environments, with dedicated arenas and PvP zones available for those who prefer combat controlled by humans. Players present in PvP zones will automatically be viable targets for PvP, so expect to see a lot of throw-downs while just traversing the map.

While some skills will be school-specific, there are abilities available to all players that add to the active and fast-paced combat. Players will be able to learn a triple-jump that takes fights to the air (no telling how long those will last) and encourage more vertical battle movement than traditionally seen in MMOs. Given the propensity of MMO gamers to jump at every granted instant, we asked if the team was concerned about players breaking the map or hopping atop buildings. Heiland told us:

“[If you can] see the top of a building, there's probably a way for you to get there," before further noting that it's the team's goal to enable that sort of creativity, not stifle it.

If battling in the air isn't cool enough, water-running is also a possibility as players advance their characters. How much combat can take place on/over water remains to be seen.

"There will be over 100 different companions available in the game that can be leveled-up through in-game experiences," Heiland said.

Companions will not be useful in PvP play, but will see use in PvE and as status symbols. They're mostly designed to assist and make a player’s life easier when traveling, more akin to pets in Torchlight than the more widespread MMO companion NPCs; actually, as in Torchlight, companions can be sent back to town to sell loot when PCs fill their slots, appealing more to convenience than anything else.

Character level determines how many companions a player can have. Players can only have one companion out at a time, and so far up to five companions can be actively training – whereas other games require players to use their critters / allies equally during battle in order to level-up at similar times.

Heiland only mentioned one of the mounts available in game: an umbrella. Yeah. Players with the umbrella “mount” will wield it in Poppins style to walk faster (and, naturally, appear more sophisticated). While using the umbrella, a player can link arms with another player and both will walk gracefully underneath.

Horses are so last year. 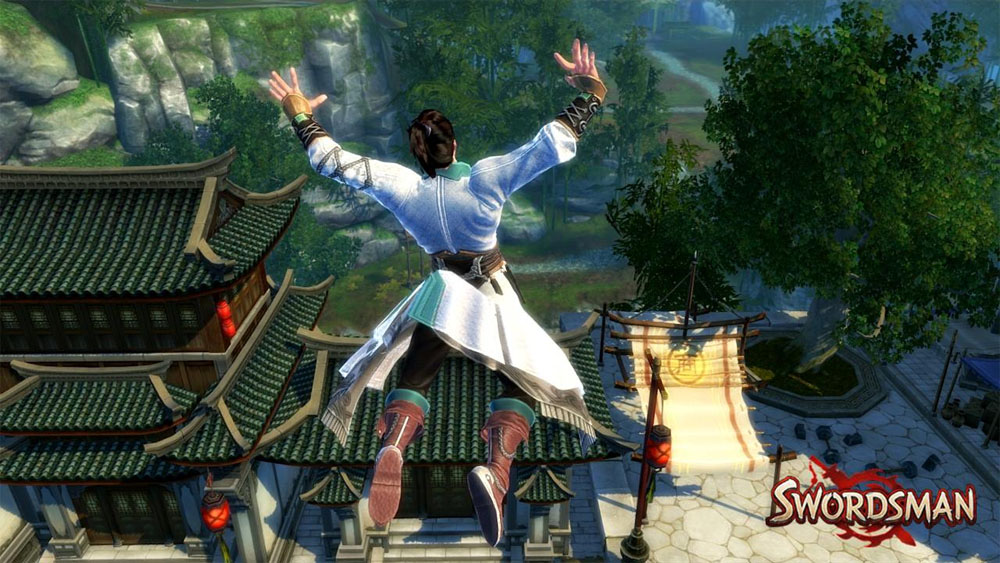 Part of what led GN to Swordsman was my love for Perfect World's Neverwinter, which GN's Steve & Tim previously knocked pretty hard. My level 60 Great Weapon Fighter Halfing—the legendary Pierogies—and I spent a lot of time together (companions were “with cheese,” “and onions”). Neverwinter was a “free-to-play” MMORPG that I didn't have to spend money in, but Perfect World did make it a little too easy. Companions got level capped at 15 and while I could advance them with “astral diamonds,” it took so many that earning them in-game would be more of a job than a game. You'll always pay for convenience in F2P games -- they've got to monetize it somehow -- but it's just a matter of how much power spending real money yields.

This is an issue with most F2P MMOs and isn't a slight on Perfect World, but the genre as a whole. It remains to be seen how Swordsman will handle its monetization.

Also, let's be real: Although "cheese" and "onions" were great companions, they really couldn't hang once I got past level 20.

We'll be keeping an eye on Swordsman, so stay tuned to twitter, YouTube, and Facebook. The game will be entering Beta this year briefly before release.