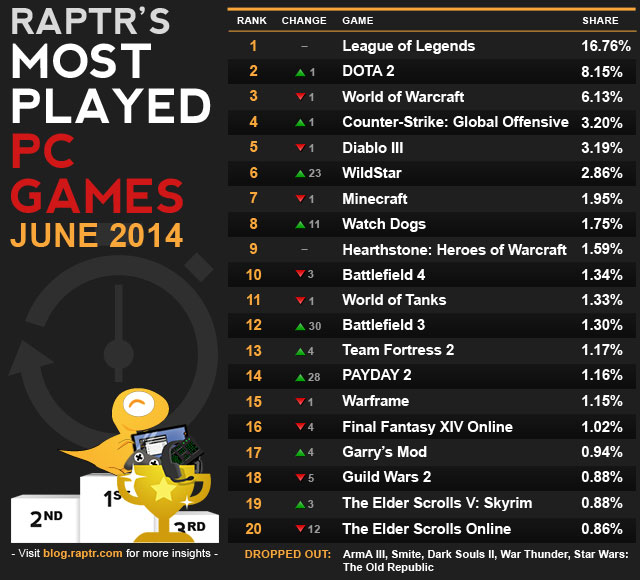 WildStar’s June 3 release had been building hype for months, even years, and with the sci-fi massively multiplayer online role playing game finally debuting, gamers set aside other titles in their library and hopped into the world of Nexus. WildStar made it to #6 on the list, capturing 2.86 percent of the total “Share” of Raptr members’ total gaming time. As a result, several action RPGs and open-world games fell at least one spot – including World of Warcraft, Diablo III, Minecraft, NCSoft’s other MMORPG - Guild Wars II (dropped 6 spots), and The Elder Scrolls Online (dropped 12 spots).

Watch Dogs, which released late May, also made a significant jump, rising 11 spots to #8.

Raptr also notes that its members increased their gaming time by 15 percent over last month. You can compare this month to last month’s survey here.

Note from Raptr: The Share number by each game represents that title’s gameplay time as a percentage of the total time spent on all the PC games played by Raptr members, and is useful for comparing the relative amount of playtime between particular games.

As for this month, what games do you expect will rise up the list? How much will the Steam Summer Sale affect July playtime, and could we possibly see more indie games in the top 20? Let us know by posting a comment below.