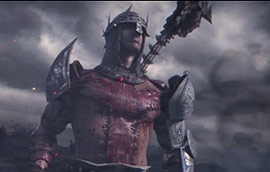 Competitors in the controversial contest were asked to upload photos of their "acts of lust" on Facebook or Twitter, where EA would judge and review them.  What can one win from questionable photos with strangers?  Why, dinner and a "sinful night" with "two hot girls, a limo, paparazzi [why would you want that?], and a chest full of booty," according to EA.  Five runners-up only had the opportunity to win a copy of that thing they are making... uhhh, oh yeah, Dante's Inferno!  Oh, and they can have a $240 gift card as well.

Electronic Arts Entertainment stated that "judges reserve the right, in their sole and absolute discretion, to disqualify any submissions that are inappropriate for any reason, including without limitation, for depicting or mentioning sex, violence, drugs, alcohol and/or inappropriate language."  Don't do anything too lusty in your "acts of lust."

Gamers retaliated with a force comparable to that of the great Spore boycott.  The #EAfail twitter page has seen an increase in visitors, many of whom claim that the contest was immature and sexist.  Yes, apparently there are girl gamers, too.  EA told the gaming community to suck it, by responding with:

"'Commit acts of lust' is simply a tongue-in-cheek way to say take pictures with costumed reps.  Also, a 'Night of Lust' means only that the winner will receive a chaperoned VIP night out on the town with the Dante's Inferno reps, all expenses paid, as well as other prizes [chest of booty]."

This isn't the first time EA has unintentionally insulted their audience.  In April, EA sent magazines illegal brass knuckles to hype up a Godfather II-based game.  Earlier in the summer, Dante's Inferno incited the wrath of several Christian organizations at an E3 trade show.

Buy your way out of this one, EA.