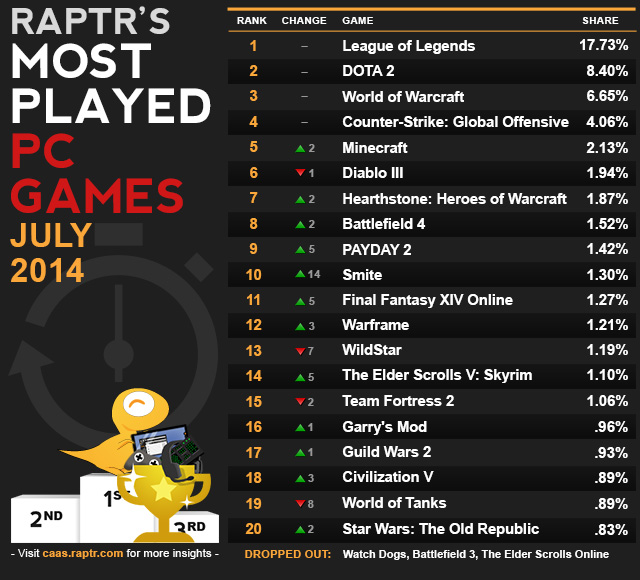 Approaching its 10-year anniversary, World of Warcraft even garnered enough playtime to occupy 6.65 percent of the list’s Share, a 0.52 percent increase in Share compared to June ("Share" represents gameplay time as a percentage of the total time spent on all the PC games played by Raptr members).

The last of the Big Four, Counterstrike: Global Offensive, introduced the Operation Breakout DLC, pushing for a 65.19 percent increase in playtime.

Smite rose the furthest up the chart with the help of Raptr’s Rewards Store, climbing 14 spots to #10. Other significant increases – 5 spots or more – included Final Fantasy XIV Online, Payday 2, and The Elder Scrolls V: Skyrim.

The newly released Divinity: Original Sin may debut on the top-20 list next month, as it has already reached #25.

Gameplay among Raptr members also jumped up significantly; they logged 15 percent more gameplay than in June -- a 30% increase.

You can compare this month to last month’s survey here.

As for games to watch out for in August, I’m thinking Dark Souls II may end up back on the top-20. It releases its Crown of the Old Iron King DLC on Tuesday, August 26. Which games in August are you looking forward to most?