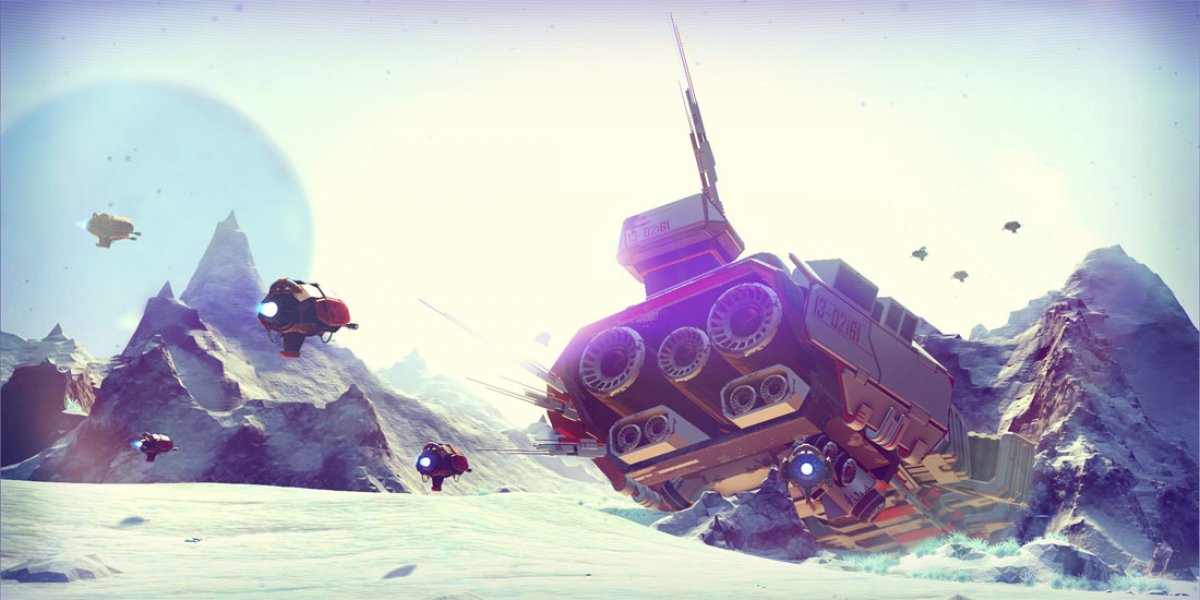 It's the crunchiest time of year. The industry is ramping into the November launch cycle, littered with the hopes-and-dreams of small startups, like EA Games and Bethesda, all clawing their way to the top of a digital cesspool of pre-Christmas sales.

That time, of course, brings with it some major video game news – and that's what we're covering today.

No Man's Sky just posted its “I've Seen Things” trailer, which shows ships warping-in to battle, planetary exploration of procedurally generated and hand-crafted terrain, and more. No Man's Sky bills itself as a space sim with a mix of space combat and first-person exploration, but doesn't aim to achieve the same level of space flight accuracy as some other active sim titles. Its biggest differentiating factor comes from the planetside adventures and fantastical environments. The trailer is certainly newsworthy, but more noteworthy is the game's June 2016 timeframe, the first official word we've heard on a release date yet.

Other topical news points us in the direction of Star Citizen. A new developer post on the Cloud Imperium Games website revealed that Star Citizen's Alpha 2.0 build will include a new flight model, which is big news for fans who've grown tired of the current placeholder system. There will be a few primary modes of flight in Star Citizen, simplified down to four IFCS profiles: Precision for takeoff and landing – to avoid smashing into station or planetary objects from the lack of fine control with digital input devices, like keyboards; Space Combat Maneuvering mode, which uses formulas to calculate strongest turning axis, maximum velocity, and drift controls; Afterburner, an extension to SCM that assists in gameplay mechanics and feel of the game by improving drift and acceleration, similar to NOS in racing games; and Cruise mode, for traveling great distances at significantly faster speeds than SCM will allow, since SCM is tuned for combat.

The full, official blog post goes into the math behind all of the different modes of transit, for those who want the deeper details on formulas involved in speed calculations.

I first played Overwatch at some PAX event – I think it was PAX Prime 2014. The game felt fine, like Team Fortress or, now, Dirty Bomb, but with new characters and some obvious MOBA influence. Overwatch never struck me as revolutionary, but was fun enough and could make a name for itself if Blizzard adequately supports the title.

This week, we learned that Overwatch has officially entered its first major closed beta phase, with registrations still being sent through Battle.net. The Blizzard team is selecting beta testers through Battle.net accounts, so be sure to check your account to see if you've been accepted. We'll be testing the game in short order and will post gameplay videos.

As a complete 180, we now look to Good Old Games for its revival of a series of old-school RPGs. Those fond of 90s cRPGs inspired by DragonLance and Dungeons & Dragons will be happy to hear that Dark Sun, a D&D official title, Ravenloft, and Krynn of DragonLance are all slated for arrival on Good Old Games. The titles have been digitally updated for compatibility with modern hardware and operating systems, but you'll get the same crisp, pixel-perfect graphics of their 90s release dates.

Fallout 4 is fast approaching and we'll soon have our review samples in-hand, but there's a final bit of news before launch: Bethesda's Pete Hines replied to a tweet asking about mod availability, stating, quote, “If it's OK with you, we're gonna focus on the game release first and talk about mods when we've figured some stuff out.”

It seems that, as of now, there may not be officially supported mod development tools immediately at launch – but it's almost guaranteed that Bethesda will eventually release a toolkit. We'll see if the paid mods fiasco has any impact on the company's immediate decisions for Fallout 4.

That's all for this week's news! Let me know what you think of these types of shorter, easier videos in the comments below. We're still doing the heavy-hitting stuff, but wanted to fill the gaps with content that can keep everyone in the loop on the industry. There's a lot of stuff that doesn't get its own video or article just because the sheer volume, so that's what this series is for.

Check out the Patreon link in the post-roll to help us out. See ya next time!