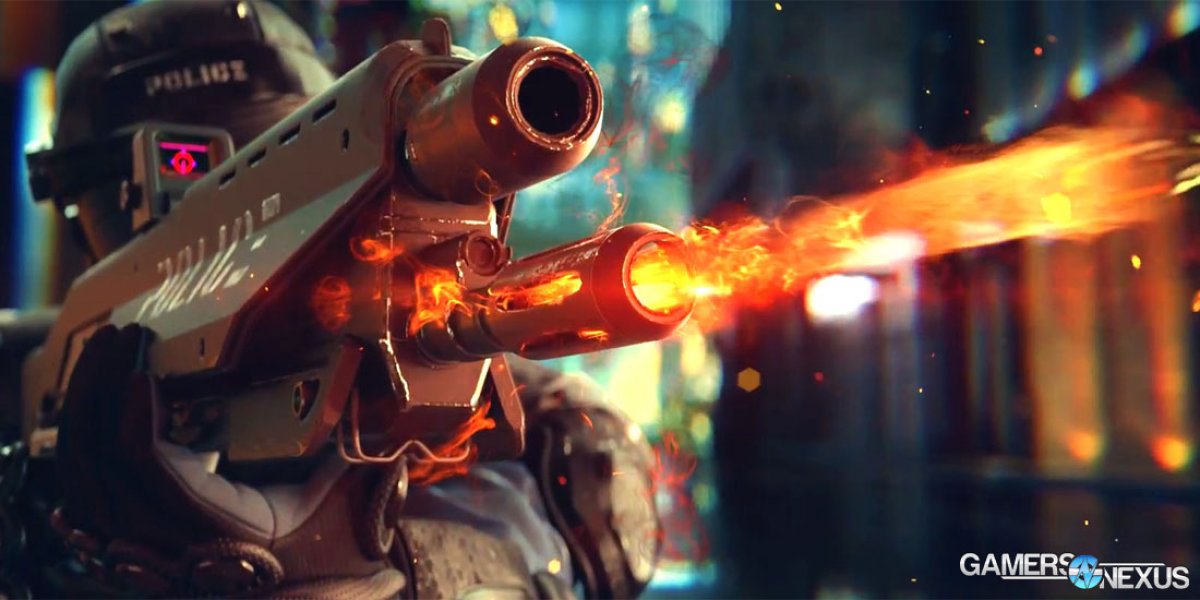 For those who'd prefer a transcript, here is the script that was written for the site's Lyndell Chase, our new YouTube commentator.

Hey everyone! I'm Lyndell from GamersNexus.net and this is your game news recap for the week. We're talking about The Witcher, Cyberpunk 2077, Steam account theft, Overwatch, space sims, and more for this week. If you're here for hardware news, check the channel for our weekly recap on that side of the industry.

We're starting off with The Witcher and its future. Polish developers CD Projekt Red, recently known for their efficient management of an 81 million-dollar budget to create The Witcher 3, this week announced a renewed focus on the White Wolf series. [Gehr-alt]'s story concluded with Wild Hunt, the third game, but CDPR was quoted as saying it “wouldn't be fair to fans” to “forget about this brand.” CD Projekt Red CEO Adam [Kit-chinski] told Polish site Money.pl that 2016 would be “devoted to The Witcher,” thanks to the game's profound sales success.

Anyone excited about the company's Cyberpunk 2077, a game that has remained in development purgatory for years, now knows the reason why external marketing has stayed silent: The CDPR team wants to make moves on its next phase of planning for The Witcher before announcing a release target on Cyberpunk 2077. [Kit-chinski] noted that an internal release target has been set for Cyberpunk, but that the team won't reveal it until The Witcher has been fully tapped for its monetization potential.

Interestingly, this public focus on monetization and budget management has become increasingly fortifying for CD Projekt Red's image. The company has managed to create multiple best-selling hits in the past few years, often on budgets severely limited in comparison to industry colleagues.

In other news this week, Steam posted a message encouraging users to opt-in to the system's double authentication security protocol. Valve stated that more than 77 thousand accounts are hijacked each month in what it describes as “organized crime.” The company seems to think that completely stopping this mass theft is unrealistic, instead opting to make it more difficult for account thieves by institituing new security measures. One of these measures is a “trade hold,” which freezes traded items for a period of time before completing the transaction. This gives rightful account holders the brief opportunity to reclaim their account and item prior to its removal from account inventory.

Valve's blog post explains that Steam Trading is the hub of account theft. Hijacked accounts will trade away items to other accounts, then still more, then more, until they eventually get sold to a legitimate user. This is effectively laundering money, but in a much nerdier, digital way. Even though we're talking about video games here and not criminally obtained, real-world money, Valve items hold massive value – some CSGO knives can sell for a thousand dollars or more, making accounts holding such items a big target by hijackers.

Valve states that it will continue to help users in restoring lost items and accounts, but also said “that doesn't deter the business of hacking accounts. It's only getting worse.”

So, what can you do about this? Opting-in to the Steam Guard Mobile Authenticator is the first thing to do. This also removes the trade hold.

Let's move back to news that's specific to games. Elite: Dangerous Horizons is a new expansion released for space-sim game that revisits a 1980s franchise. We already benchmarked the game last year, but it's changed massively since initial launch and is worth a serious look by anyone who hasn't yet considered a buy.

Elite: Dangerous doesn't have as large a scope as Star Citizen and is already playable, providing a worthy space-sim until more hands are on No Man's Sky and Star Citizen alike. Horizons adds planet-side exploration for billions of star systems, adds buggy driving on cratered-out surfaces, and adds mechanical complexity to the game's already-existing features.

Players who don't much care for planet-side exploration may instead be interested in the new dog-fighting arena, similar in concept to the Arena Commander module for Star Citizen. The dog-fighting arena provides a single point of conflict for players to engage in high-speed, ship-to-ship combat.

Horizons is already out and available for Elite: Dangerous owners.

A new weapon was added to Valve's Counter-Strike: Global Offensive earlier this week. The R8 Revolver has been the center of controversy as the weapon has found its way into load-outs, mostly called-out for effectively eliminating the need to purchase any other weapon. Its sheer power allows for one-shot kills with great efficiency and cost-benefit; this also makes Eco rounds less difficult to overcome for losing teams, empowering them in a way that immediately thrusts the team back into competition.

The R8 Revolver is currently bugged in purchasing. It's listed as an $850 purchase in the game's menu, but can be had for $700. Valve will probably nerf the weapon in the next update.

We've been in discussion with Blizzard's engine team this week about Overwatch and its graphics engine, hopefully with a ton of new data that we can reveal as the game nears completion. Until that time, we're still waiting for Blizzard to continue its push through beta stages. Blizzard recently said that it hopes to add new heroes and maps as free content, not DLC, which seems like a good fusion with the somewhat unexpected payment model. Overwatch, unlike other current team shooters, is a game you pay for one time, then begin playing. Free content distribution sounds good to us.

Closing us off is Epic Games' Paragon, a game that was teased a few weeks ago with effectively zero supporting information of substance. Following continued teasers of in-game heroes, and proving our initial predictions correct, Epic this week unveiled that Parargon is a MOBA running on Unreal Engine 4. Paragon is supposedly pushing for high-fidelity graphics and more realism than other MOBAs, but still brandishes the superhero-esque vibe of hero types. We'll continue following this game as more is revealed.

That's all for this week's game news recap! Be sure to check the channel for our hardware news video and, if you haven't already, hit that Patreon link in the post-roll video to see how you can directly support our expanding efforts! Thanks for watching, see you all next time.