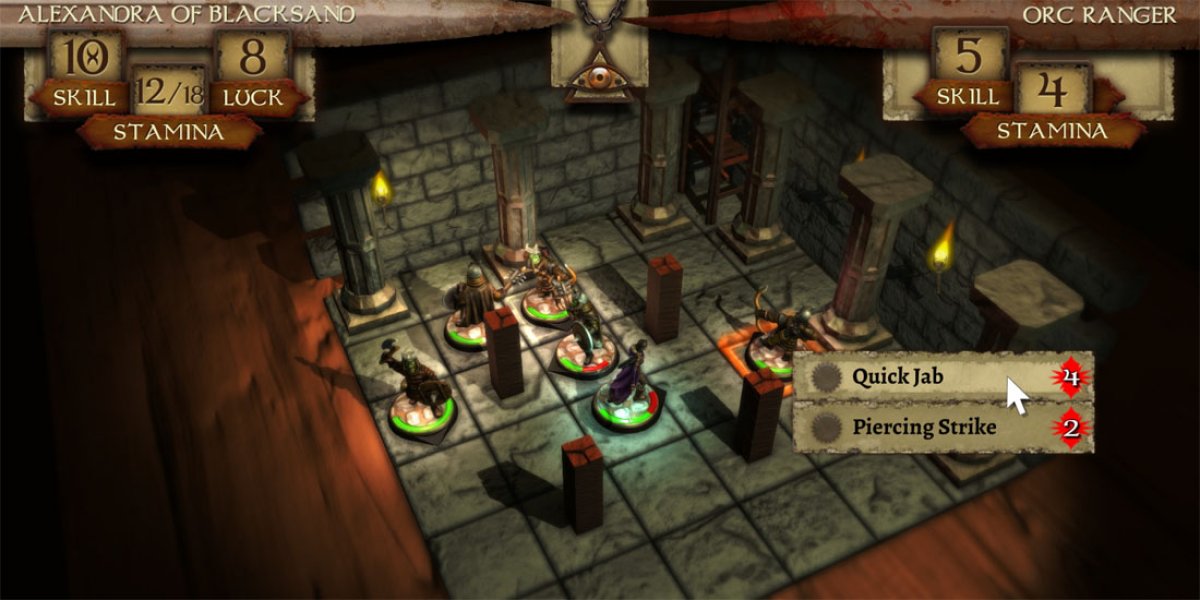 The game itself is fairly straightforward: the character you pick wants to fight their way through Firetop Mountain and kill the warlock Zagor. To begin with, there will be four selectable characters at campaign start, but eight more are unlockable through “Souls.” Souls are gained from slaying monsters in Firetop Mountain, and will be useful for multiple completed play-throughs as the devs continue to roll-out heroes (including plans for ~10 more post-launch).

Besides having different stats and special attacks, each character will have unique stories. Firetop Mountain laythroughs with a new character mean a unique take on the game -- a tune we’ve all heard before, but not an insignificant one. Some characters will be able to unlock different paths, so a mage might travel through the School of Mages, while another hero may end up in the Spider Caves. The end goal is replayability by encouraging exploration and providing new monsters and encounters for each character. 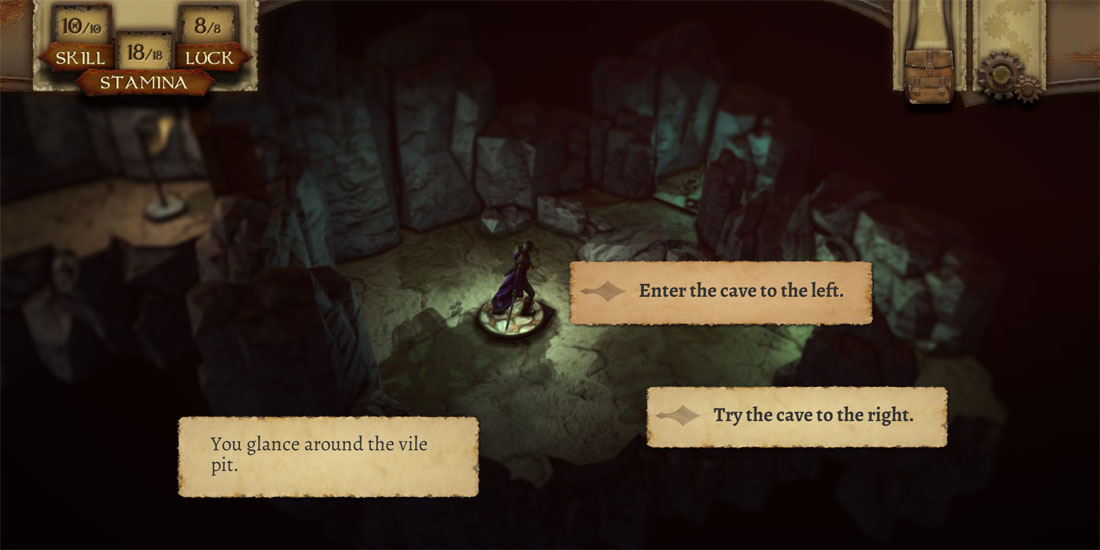 Gameplay is pleasingly simplistic. Characters have three main stats: Luck, Stamina, and Skill. Luck is used as a catch-all for various skill checks, similar to what might be rolled in D&D. Lead programmer Clinton Shepherd used the scenario of sneaking past a foe, describing Luck as the equivalent for a “stealth check” in such an instance. Stamina is the character’s health, reduced from taking hits in combat, and Skill is used in combat to determine the outcome of a Clash. We’ll come back to that.

Like the stats, combat is also pretty straightforward. An encounter with an enemy is played out on a grid. The player and each enemy take turns either making an attack or moving one square. The skill of combat in The Warlock of Firetop Mountain comes from the player reading the enemy's movements and learning where to attack and when to move. Computer-controlled enemies attack in patterns and tend to face the direction they intend to move or attack in. They also telegraph their attacks with a slight jiggling the turn before their action, which reduces player frustration. A “Clash” happens when the player and an enemy attack each other at the same time, resulting in a die check between opponents. Two six-sided dice are rolled -- which is visually shown -- and their skill modifiers are added to the roll. The winner deals their damage, while the loser’s attack is ignored.

The game isn’t only about combat, though. The player is given plenty of choices along the way: Whether or not to go through a door, which path to take, and how (or even if) a chest should be opened. The Warlock of Firetop Mountain is as much about the choices made as it is about combat. And just as your choice of character determines how the game plays, so do decisions to move in new directions or interact with objects.

Before we had stepped into the booth for the Warlock of Firetop Mountain at PAX, we were completely uninitiated in the title’s history. We had picked the game as an interview subject for the two reasons: (1) we thought the animations of the “miniatures” looked cool, and (2) the name -- Steve Jackson. As we learned (and some of you probably know), it’s not the same Steve Jackson who created infamous games like Munchkin and Cthulhu Dice.

This Steve Jackson was not only British, but turned out to be equally interesting. Along with Ian Livingston, whose name also appears before The Warlock of Firetop Mountain, the pair created a company I have personally been a fan for years: Games Workshop. This Steve Jackson also went on to create Lionhead Studios with Peter Molyneux. Ian Livingstone, meanwhile, is now the CEO and president of Eidos Interactive. Before any of that, the two created the Fighting Fantasy gamebook series where players would follow a set of rules to play through the story, rather than just reading it as a novel. The first book in the series was the very game being adapted now: The Warlock of Firetop Mountain. In a funny little twist, The American Steve Jackson (of Munchkin fame) would later write some of the Fighting Fantasy books, just not this one.

Backed by an interesting and nerdy history and detailed digital figurines, The Warlock of Firetop Mountain turned out to be something of an RPG gem at PAX West. Featuring art from the original Fighting Fantasy books as well as new art by the original artist, Russ Nicholson, Tin Man Games (re)creates an enthralling fantasy tale. The game is already out and was previously funded successfully on Kickstarter.