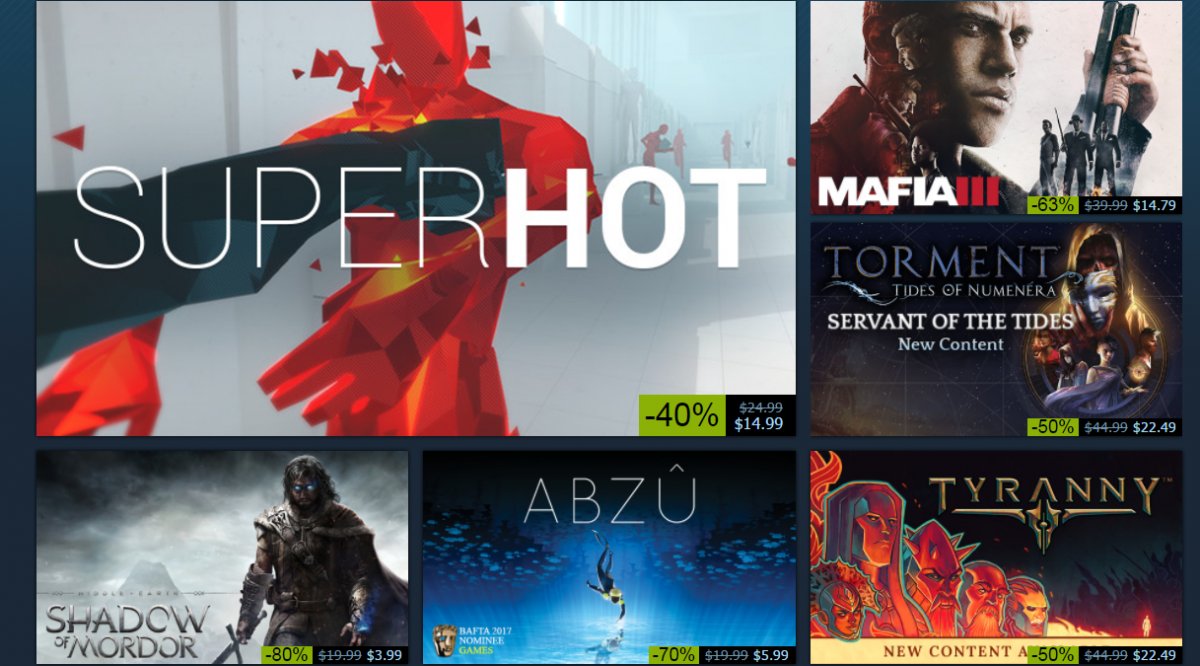 GTA V ($30) - GTA V has received some bad press these last few weeks, starting when Take Two started sending Cease and Desist orders to popular mod websites for the game’s single-player mode. The recent reviews are showing “Overwhelmingly Negative” at the time of writing, bringing the overall reviews down to “Mixed.“ These recent negative reviews are not all indicative of gamers’ feelings towards the game content, but as a reaction to Take Two’s decision.

Dishonored 2 ($20) - Dishonored 2 had a launch plagued by performance issues, those seem to have been worked out, as the game currently has Mostly Positive reviews. Bethesda announced a new Dishonored game at E3 -- Dishonored: Death of the Outsider -- and will serve as a standalone story. The first Dishonored is also on sale this week for $2.49 as well, if you want to play them in order.

Prey ($39.59) - Prey released last month, May 4th, and has been well received with “Very Positive” user ratings. The Sci-Fi thriller/Survival game is an FPS set aboard the Talos ship orbiting the moon in the year 2032. The game at launch did have some performance issues, but those have been largely worked out with driver fixes and game updates.

The Witcher 3: Wild Hunt GOTY Edition ($25) - The Witcher 3 has been one of the most widely well-received RPGs in recent years. Developer CDPROJEKTRED is a smaller developer than competitors, but has provided a true AAA experience with the Witcher series. The GOTY edition is the base game plus all the DLC. For reference, the non-GOTY version is on sale for $24.

Sniper Elite 4 ($30) - Sniper Elite 4 released earlier this year in February, and is one of the few games available with DX12 implementation. This title is one of the best-scaling SLI titles out right now, has excellent optimization for both AMD and nVidia, and was also released to critical acclaim for its campaign. SE4 is a strategic shooter and has received “Very Positive” reviews. Unfortunately, this does require a Season Pass in order to experience the whole game, but the Season Pass is on sale for $23.44; alternatively, the SE4 Deluxe Edition for $45.

Tom Clancy’s Ghost Recon Wildlands ($40.19) - Tom Clancy’s Ghost Recon: Wildlands has found its way to our bench since around the launch back in March of this year. The third-person tactical shooter is set in an open world Bolivia controlled by a large drug cartel. The game can be played with up to three friends, making it ideal for co-op, but can be played in single-player with three AI bots.

Watch_Dogs2 ($30) - We have done exhaustive benchmarking on Watch_Dogs2, and found the game to perform much better than the first Watch_Dogs game. The Watch_Dogs series are open world games, where the player can hack pretty much anything. If you are someone who likes to play the prequel before the sequel, both games can be purchased together for $35.08 during the Summer Sale.

These are just some of the deals available during the Steam Summer Sale, a lot more games are still available. Just as a reminder, the sale runs until July 5th.