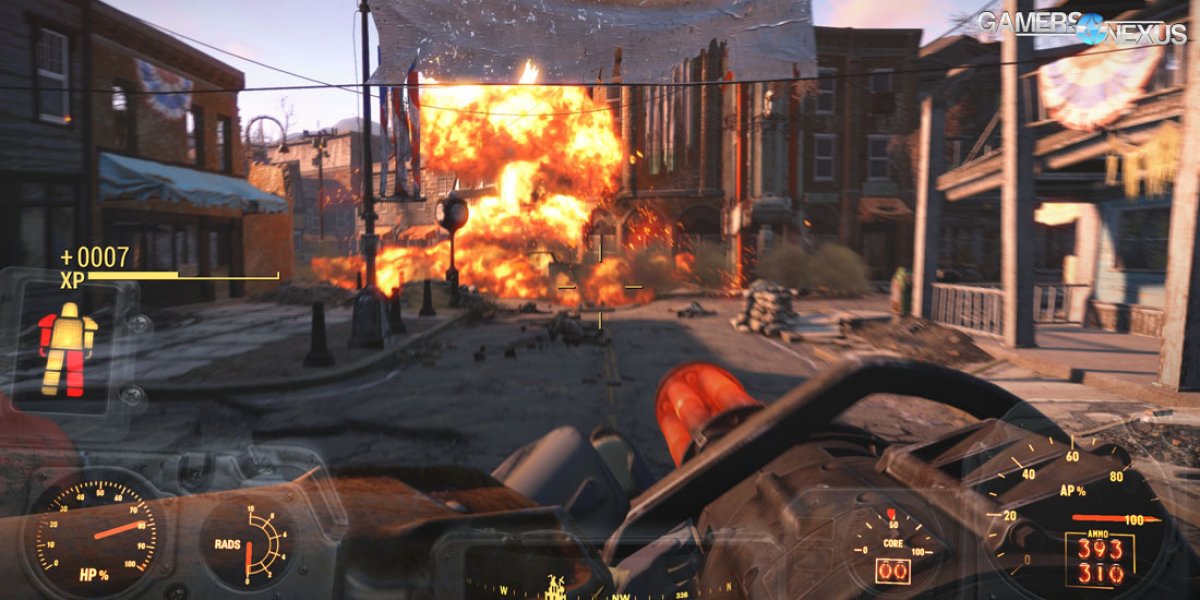 I played Fallout 4 on the “Normal” difficulty setting, and in this review there will be no storyline information that isn’t immediately revealed.

Multiple areas in the Commonwealth are designated as “settlements.” Settlements have, shockingly, settlers and a few basic structures present. From there, junk and objects can be scrapped for basic building materials -- the standard fare of plastics, gears, and woods.

Many resources require settler assignment for processing, making for an interesting growth of economy in city-builder-esque spirit. Settlement growth lends way to raiders, desperate for the rare resources of the wastelands, who begin attacking with increasing numbers and frequency. 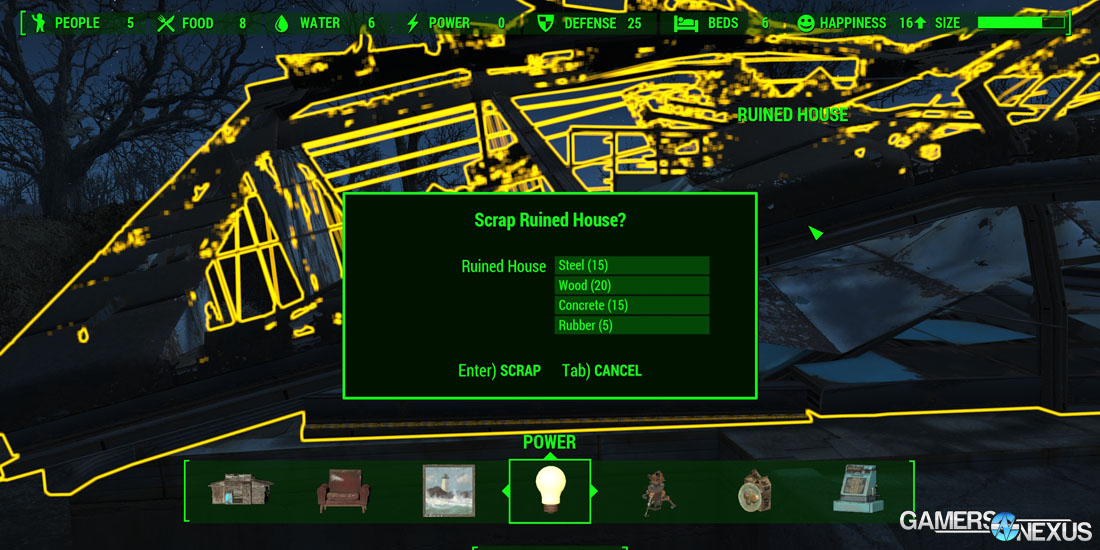 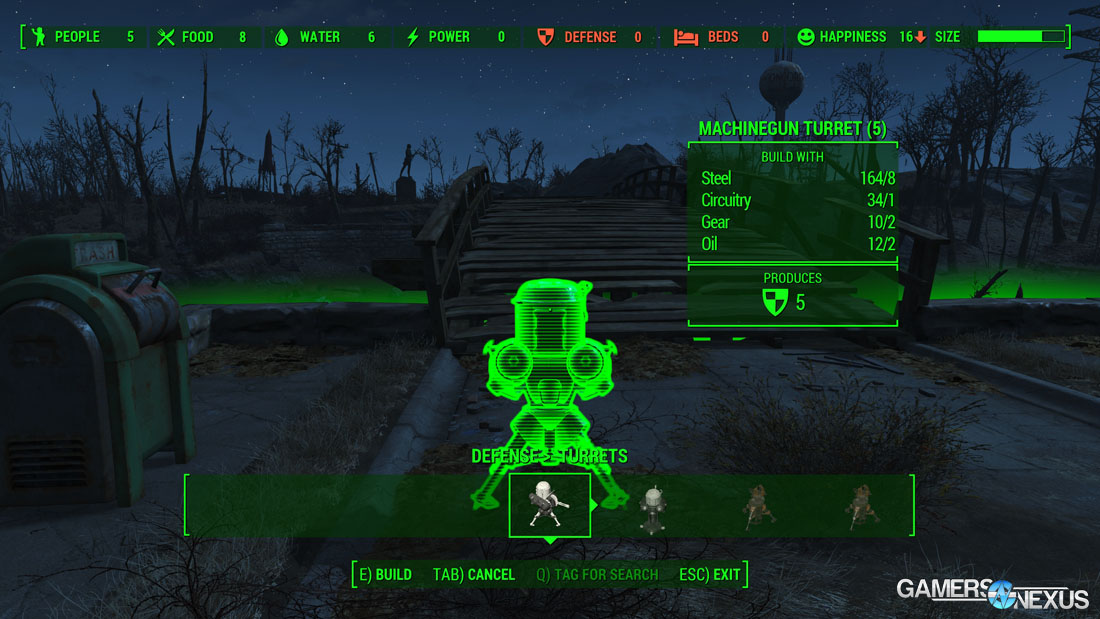 The execution and mechanics of settlements are what’s important, though -- not just the promised features.

Settlement building itself is intuitive and offers a somewhat deep selection of options. My first observation is that these settlements allow for players to establish a trade camp even after they create ghost towns out of prebuilt cities, like Diamond City. The expansion of towns and recruitment of Minutemen provides a safe place and a helping hand in fights. I also had fun building mega-houses, if only to flaunt my wealth over the otherwise post-apocalyptic world.

Settlement building is easy, fun, and useful for creating “backup” towns and customizable player homes. The Minecraft inspiration is apparent here and, despite some skepticism leading to launch, we think Bethesda successfully executes its vision for player settlement construction.

Fallout 3’s FPS mechanics were bad. Let’s just get that out there early. There were no iron sights, enemies were too stupid to take cover, and it was just plain easy. Ammo was so abundant that the concept of switching weapons based off ammo restrictions rarely occurred to me -- hardly immersive.

But that was Fallout 3.

Bethesda moved Fallout 4 much more in the direction of a first-person shooter game than Fallout 3 or New Vegas. Ammo for good weapons is scarce, so suddenly there’s a need to carry multiple guns and, even though, I occasionally found myself scraping the bottom of the ammo barrel. Ammo conservation for good weapons is a must in Fallout 4, and that greatly impacts difficulty and immersion. Both good things. 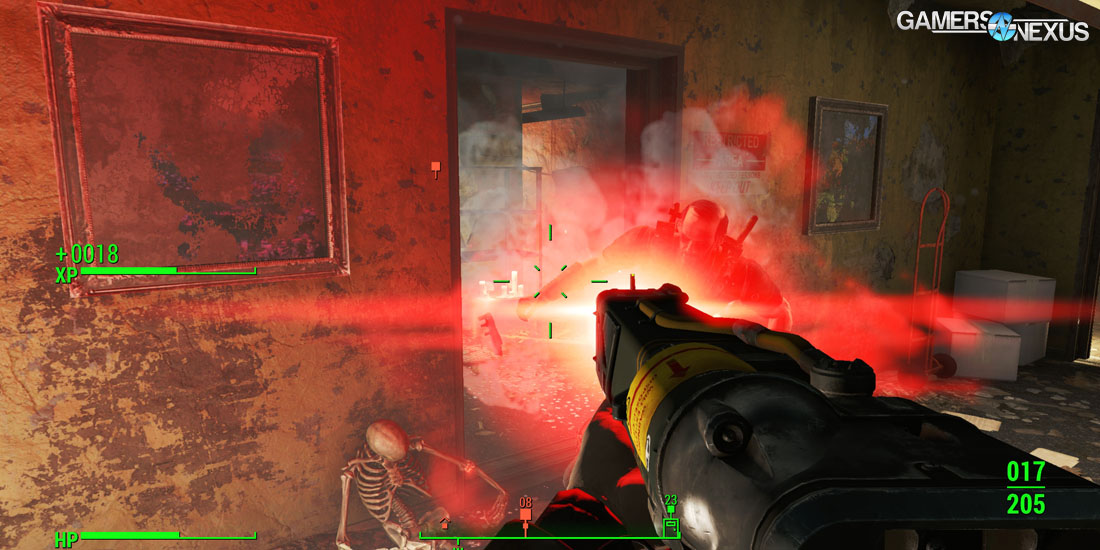 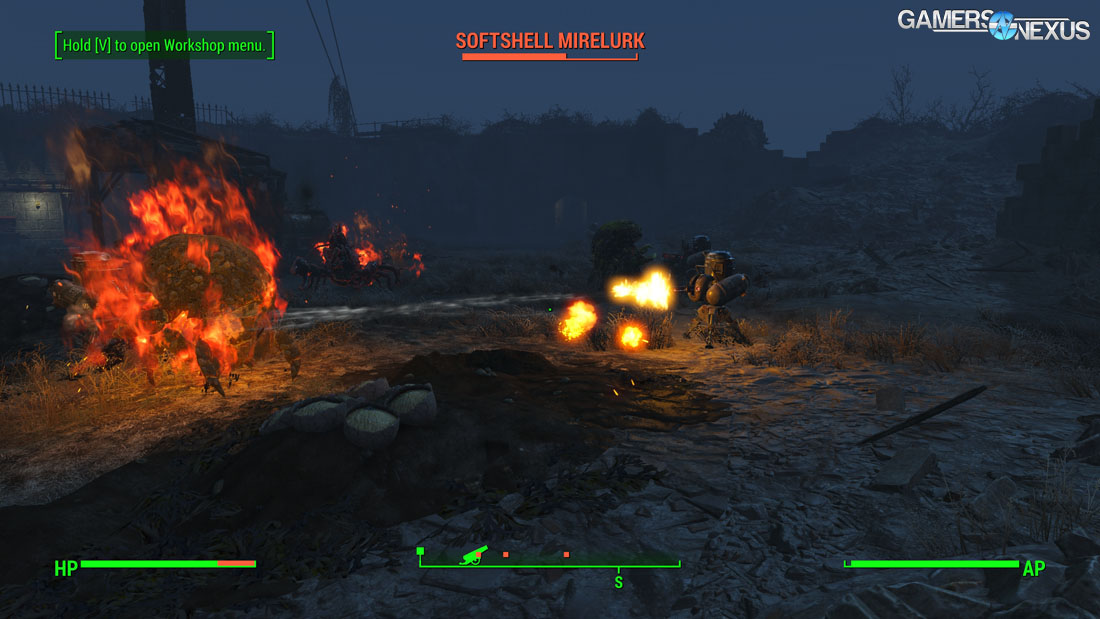 Enemy and companion AI have also been revamped to actually make sense. Enemies will now take cover and peek-out to take shots. Better yet, enemies are actually capable of killing! Within the first couple minutes of the introductory shootout, I died. A couple minutes later, with my newfound knowledge, I died again. I died because I expected Fallout 4 to require as much strategy as Fallout 3, which is to say “none.” Instead, the new game actually required that I take cover and use my weapons and environment intelligently, rewarding player creativity by way of not-dying. Situations are occasionally unwinnable, requiring flight, and this makes level scaling feel less hand-holding-y than Skyrim.

Companions have also been improved; “Dog,” my companion -- he’s a dog -- will attack enemies, incapacitating them as he mauls them. The companions are now mercifully scripted so that they shouldn’t get stuck behind objects from failed pathfinding, as happened frequently in Bethesda’s previous games.

The changes can be primarily summed up in one, key way: Fallout 4 plays like an actual first-person shooter game. The changes to combat and FPS mechanics create a real challenge in combat. Fallout 4 isn’t just a roleplaying game with the FPS being treated as a second-class citizen; instead, Bethesda has made Fallout 4 more of a true FPS (no more reliance on VATS, but still hit detection) with RPG backing.

Part of the reason I enjoy Fallout 4’s new combat system is the ability to heavily modify weapons and armor for different strategies or playstyles. Weapons can be modded to add longer stocks, magazines, the addition of saws and other pointy objects, and more. The mods are compromises though, so a mod may increase damage, but decrease accuracy. This leads to weapon modding that allows for unique character builds, but theoretically eliminates situations where one weapon is perfect for everything. That said, I’m sure min-maxers will figure out how to best game the system in short order.

To supplement weapon modding, Fallout 4 also has armor modding which, so far, I find impressive. I’ve primarily modded my power armor – something you receive early on – since I desire to become a tank when needed, as my high-intelligence, high-charisma character has little health. 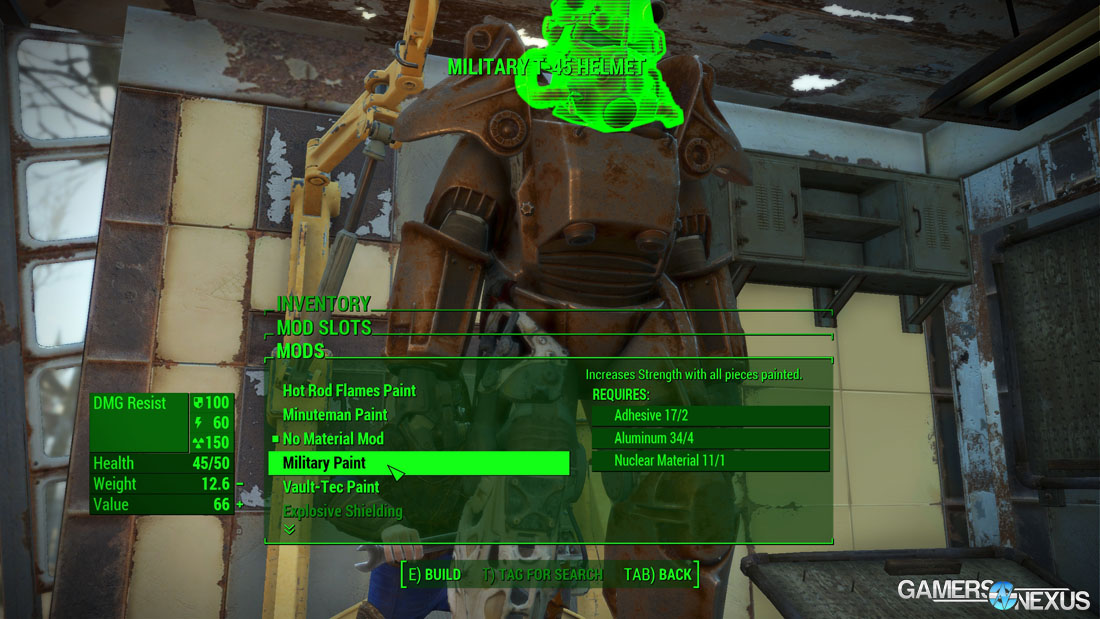 Augments can be added that increase defense, add lights, and increase strength. The armor system is now tiled, allowing for an arm cover to be worn over a vault suit, for example. This sets forth the tides of creativity, enabling an almost annoying depth of armor customization.

The weapon and armor modding, alongside the tiled-armor system, means unique playthroughs stemming from the modded results. This is how Fallout should have been from the start. In Fallout 3, I found it very easy to fall into the same character type each time: a balanced character with energy weapons and power armor who kills everything and never dies. Easy. Fallout 4’s system of combat and modding makes me want to try every crazy strategy I can conceive.

The series’ atmosphere is the driving appeal behind Fallout. We’re talking setting, here, not graphics, just to keep everyone clear on that. Fallout 3 did well with its atmosphere, creating a dead, creepy, almost hopeless world in which there are a few people struggling to live and fewer still trying to bring humanity back. Fallout 4 creates a similar atmosphere, where we commonly see people struggling, asking for help against raiders, and, occasionally, begging for clean water -- a new low. There is ample mystery and intrigue, like the strange Institute and “Synths” feared by many. 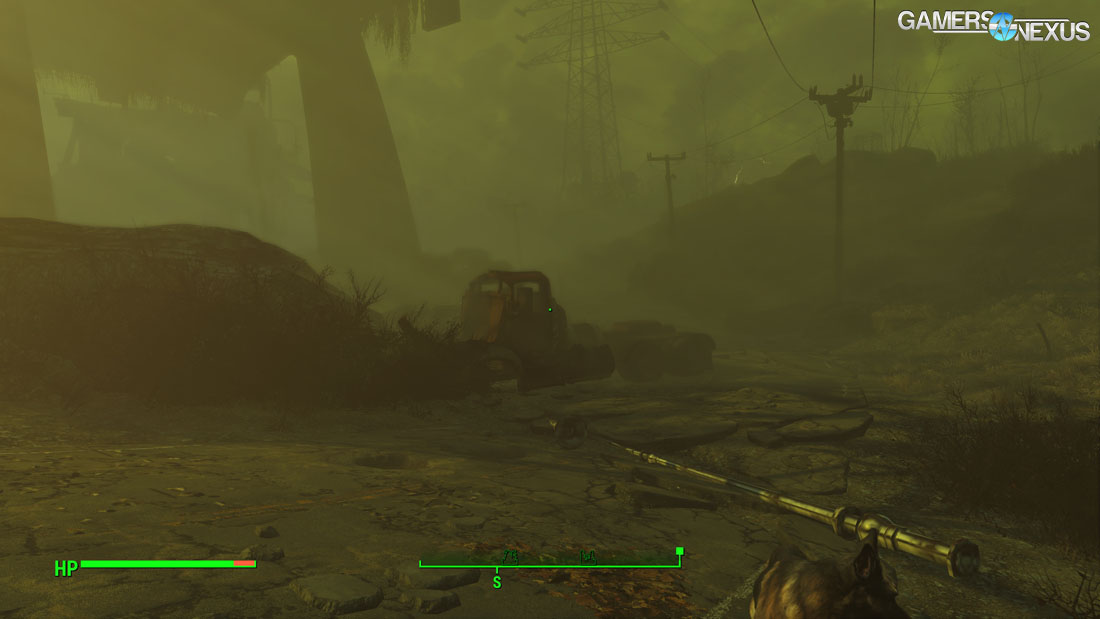 Bethesda has also included dynamic weather, including fog, radiation storms, rain, lightning storms, cloudy days, et cetera. The weather changes help to create the idea that the world is dynamic and deadly and happens at the drop of a dime. Fallout 4 proliferates the atmosphere Fallout 3 had, sometimes making exploring a heartless, depressing task, while other times turning exploring into a battle-ridden endeavor. Bethesda did well to present Fallout 4 as a desolate world without hope. 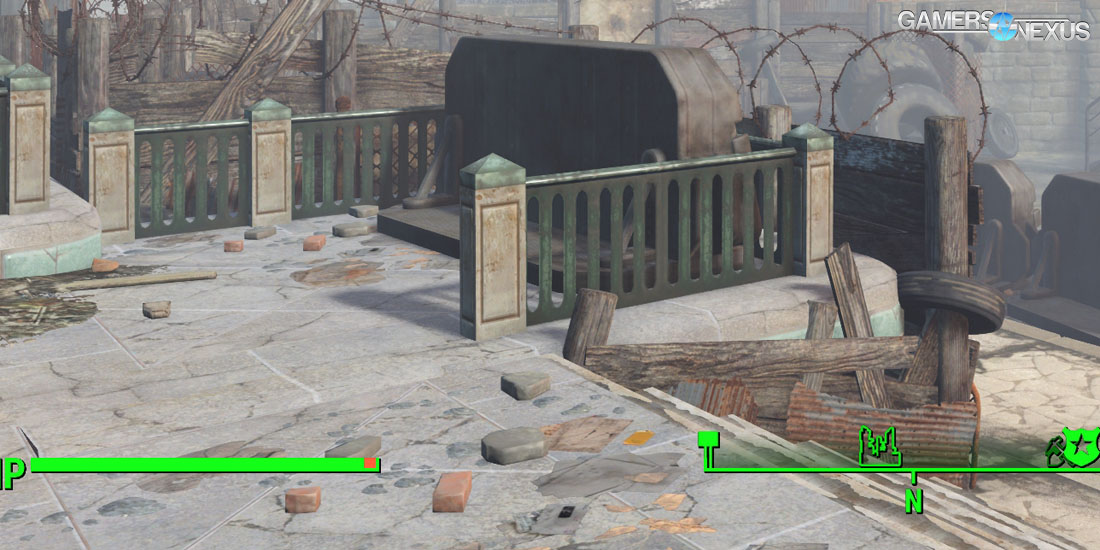 (Above: Some of the laziest graphics we've seen in a modern game).

Fallout 4 does a lot of things well, but Bethesda falls disappointingly short on both graphics and optimization. At least they’ve gotten rid of the orange and green tint of previous games.

Our GPU benchmark of Fallout 4 delves deeper into the poorly optimized visuals, discussing the overall poor performance on high-end hardware given the last-generation fidelity. FPS has a range of nearly 100% in some of the game’s cells, creating spurious motion in the frame delivery. Mouse “smoothing” and “acceleration” presents itself by way of a framerate tie-in to the woeful iPresentInterval in .ini files; until iPresentInterval is set to 0, mouse input is inaccurately represented on-screen and feels as if it “lags” behind physical movement. 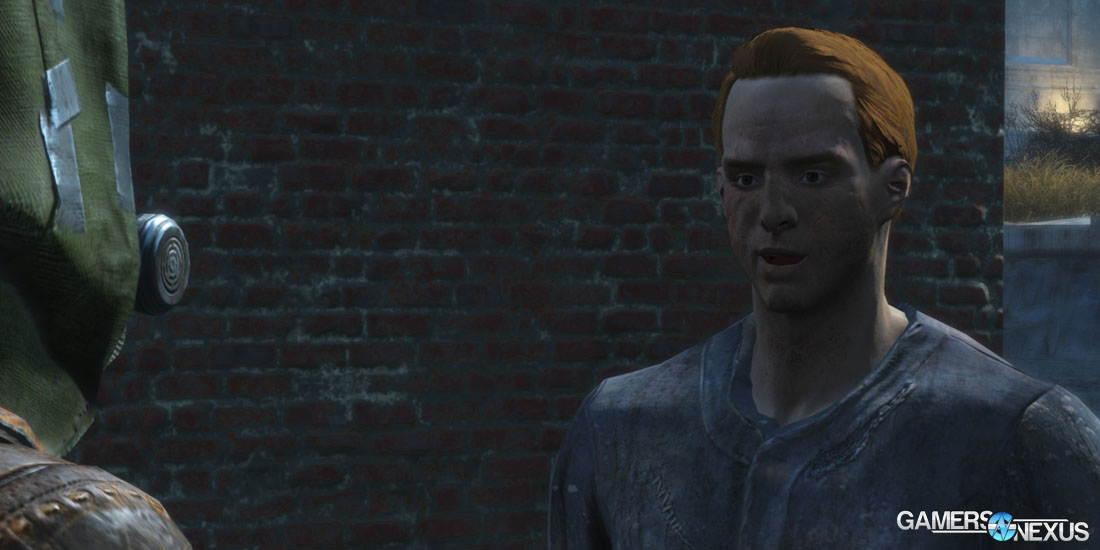 One thing that is worth noting, though, is Bethesda’s tremendous growth in the face sculpting department. Except the baby, which looks creepy and almost as if made from plastic.

First off: For a Bethesda game, "only" encountering a few CTDs is an improvement. GN's Steve, benchmarking the game, ran into two crash-to-desktop events (one involving minimizing). 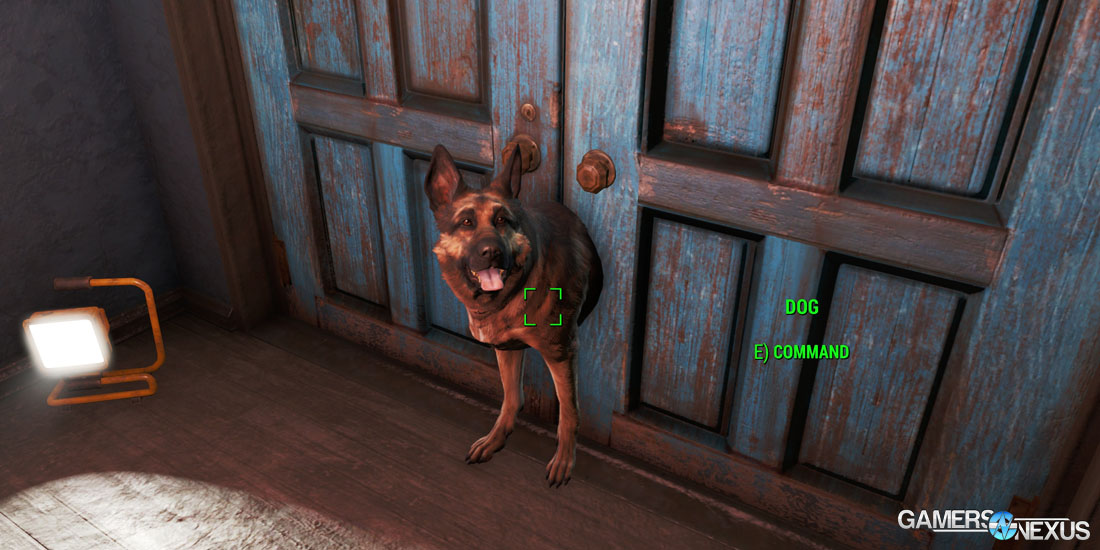 Fallout 3 has its fair share of bugs, even after the pre-release updates released by Bethesda. This is what Bethesda has to work on. The company has built an almost comical reputation of failure to release a stable product, to the point that it’s expected of modders to resolve all underlying issues through unofficial patches. I had hoped Bethesda would improve on this front, especially considering how long Fallout 4 was in development, but it isn’t so.

I’ve encountered a lot of bugs, including, but not limited to: Companions getting stuck in doors, doors ceasing to work after another character goes through them first, trouble initiating fast travel, NPCs not responding when speaking, NPCs going to sleep while talking (then talking while asleep), voice-over audio overlapping or cutting-out during interaction, incorrect subtitles, issues entering and leaving settlement-building mode, and pixelated rendering of god-rays when they are partially occluded. 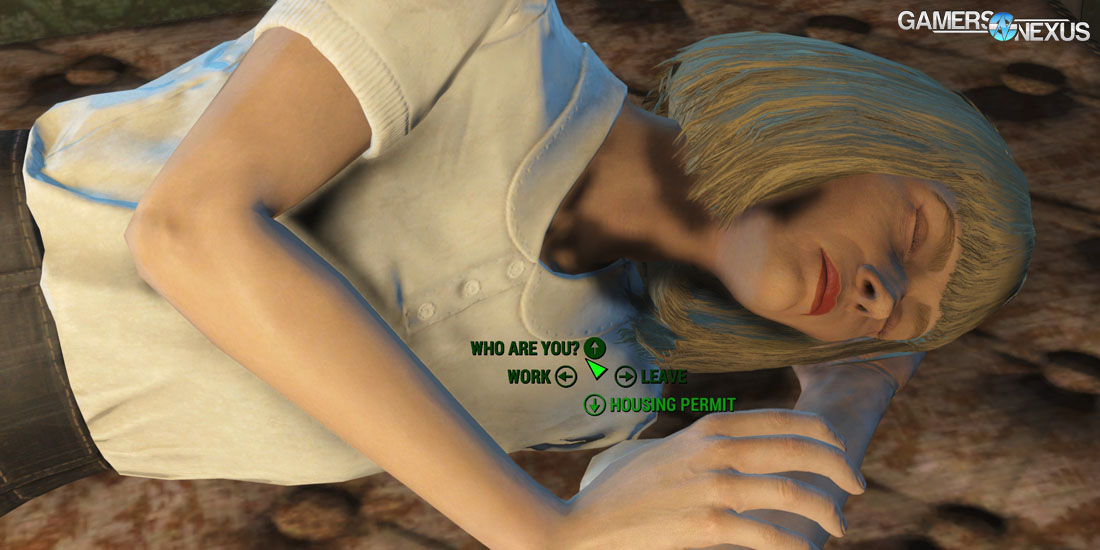 While this is annoying, it’s worth pointing-out that most of these bugs require a reload of a save at worst. Bethesda will also hopefully resolve bugs through patches and, at worst, I hope (and would expect) mods to address bugs not fixed by Bethesda. This was the case for Fallout 3, New Vegas, and Skyrim.

Either way, Fallout 4 is currently buggy. It’s tolerable, but annoying; more is expected from a game that’s been in development this long. 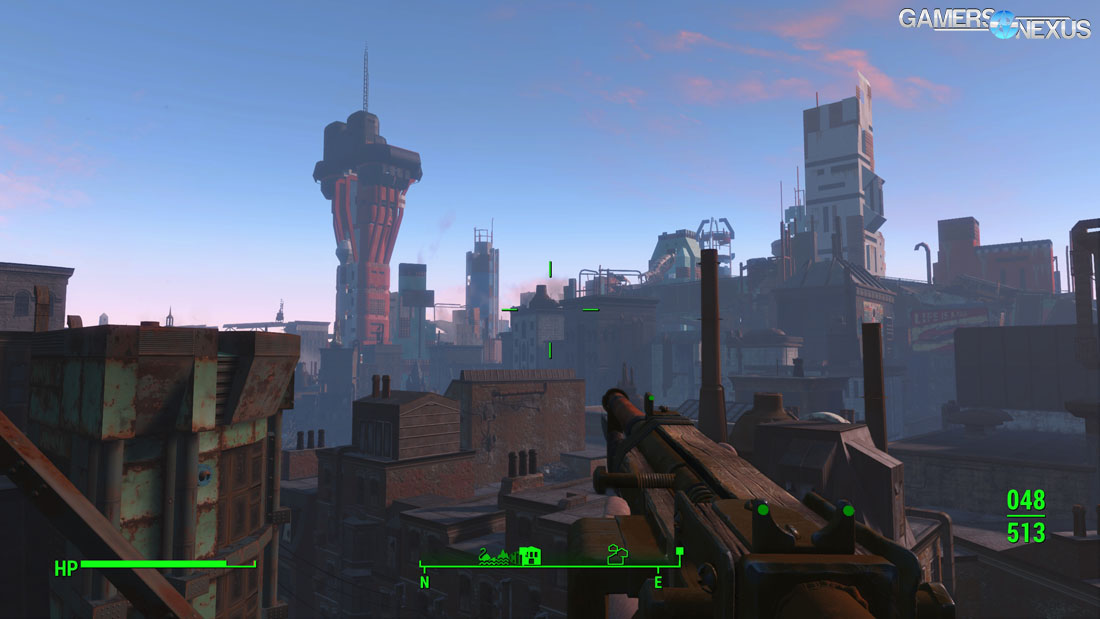 For those who bought first-class tickets for the Fallout 4 hype train, it may be disappointing in a few critical ways -- bugs and graphics-to-performance ratio, mainly -- but Fallout 4 is still a good game. Despite its problems, Fallout 4 takes what Fallout 3 was, fixes a lot of its problems, and adds more features and customization. The weapon and armor modding and settlement building ensure greater longevity of play by expanding the player’s investment in the landscape, and also offer innumerable exciting modding opportunities.

The game’s atmosphere and much improved FPS mechanics work with these newer features to make Fallout 4 a unique, compelling game that (mostly) met my high expectations. Flaws aside, unless you’re die-hard on high-fidelity graphics -- which Fallout players aren’t used to, anyway -- Fallout 4 is a great game that I would readily suggest, and I can’t wait to see what modders do with it.

It’s truly a unique characteristic of Bethesda that their games can be reviewed on merits as a modding platform.

If you like our coverage, please consider supporting us on Patreon.