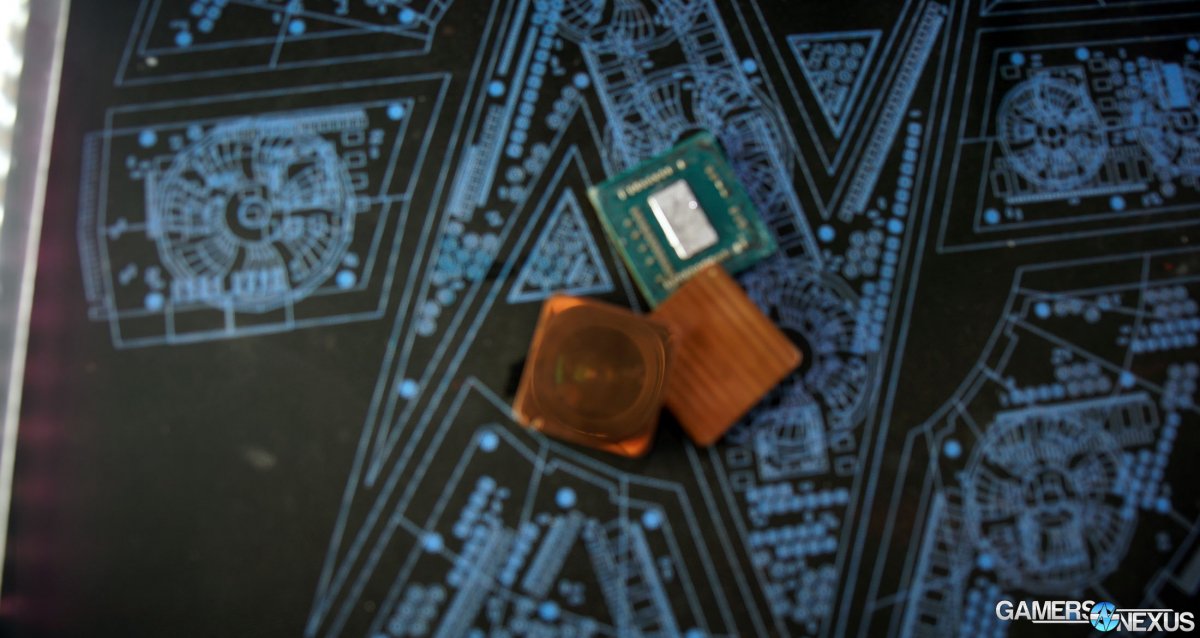 Short of using a power sander, which we avoided as we wanted manual control over the process, we found it worked best to tape the sandpaper to the surface (atop a GamersNexus Anti-Static Modmat), then move the decoupled IHS over surface. We ran three sanding passes for each grit, finishing with wet sands for each. After the third and final (wet) sand at 600 grit, we moved to 1200 grit. 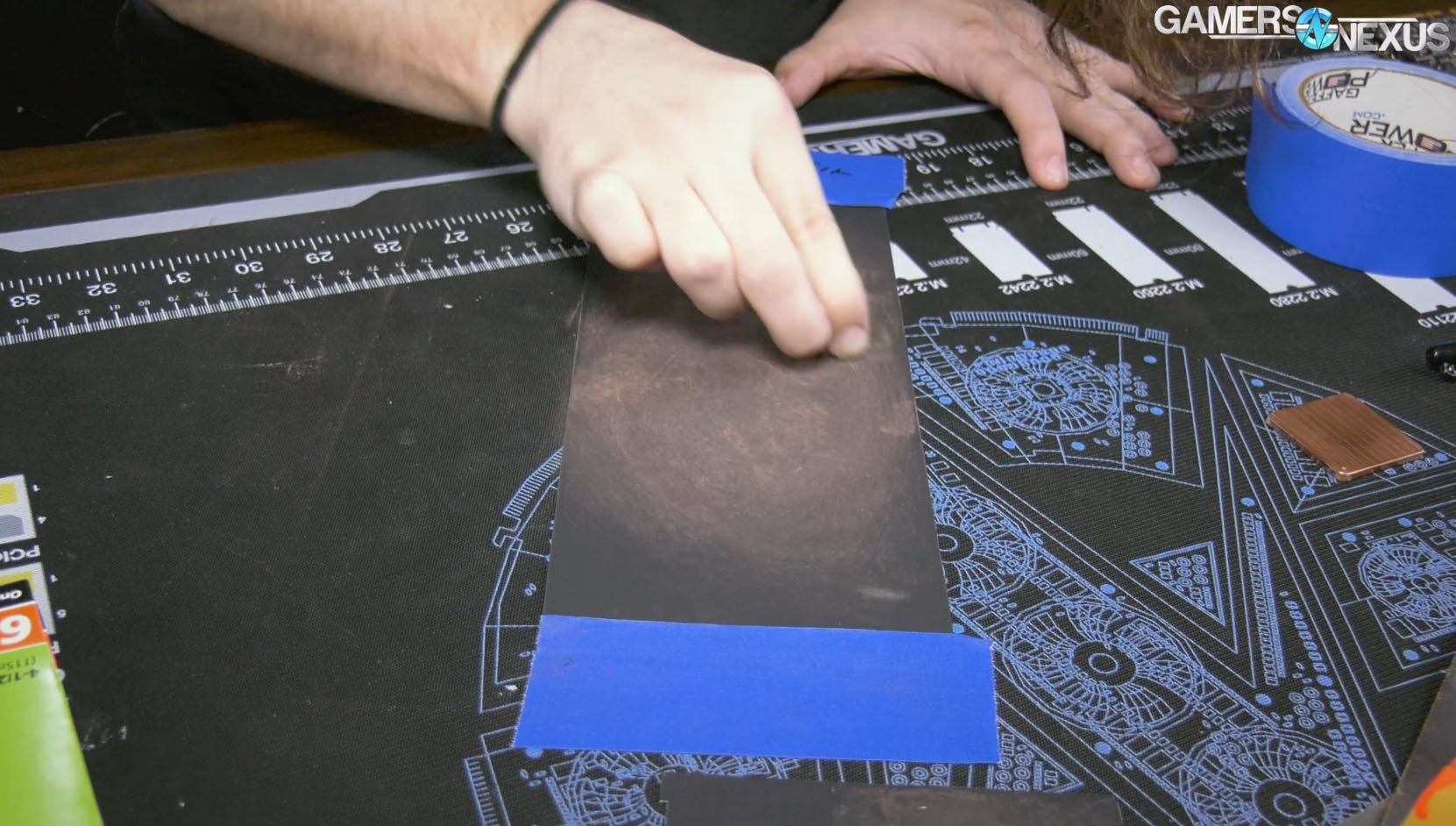 And repeat: Another three sanding passes of this, eventually removing the entirety of the nickel plating on the IHS surface. We finished with a wet sand again, then moved to 1500 grit, 2000, and 3000. The 3000 grit sand was also done wet, and smoothed out the surface. 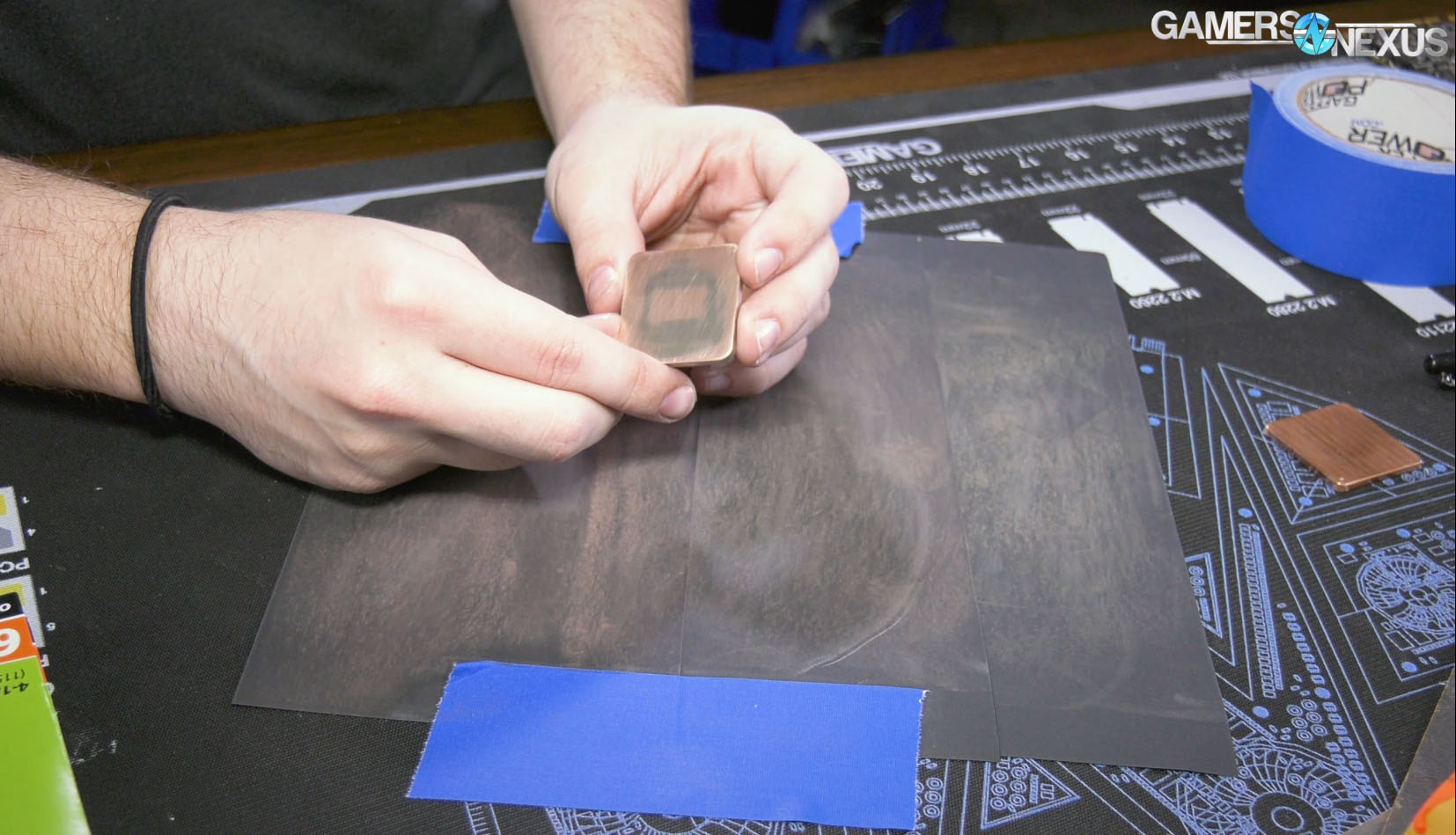 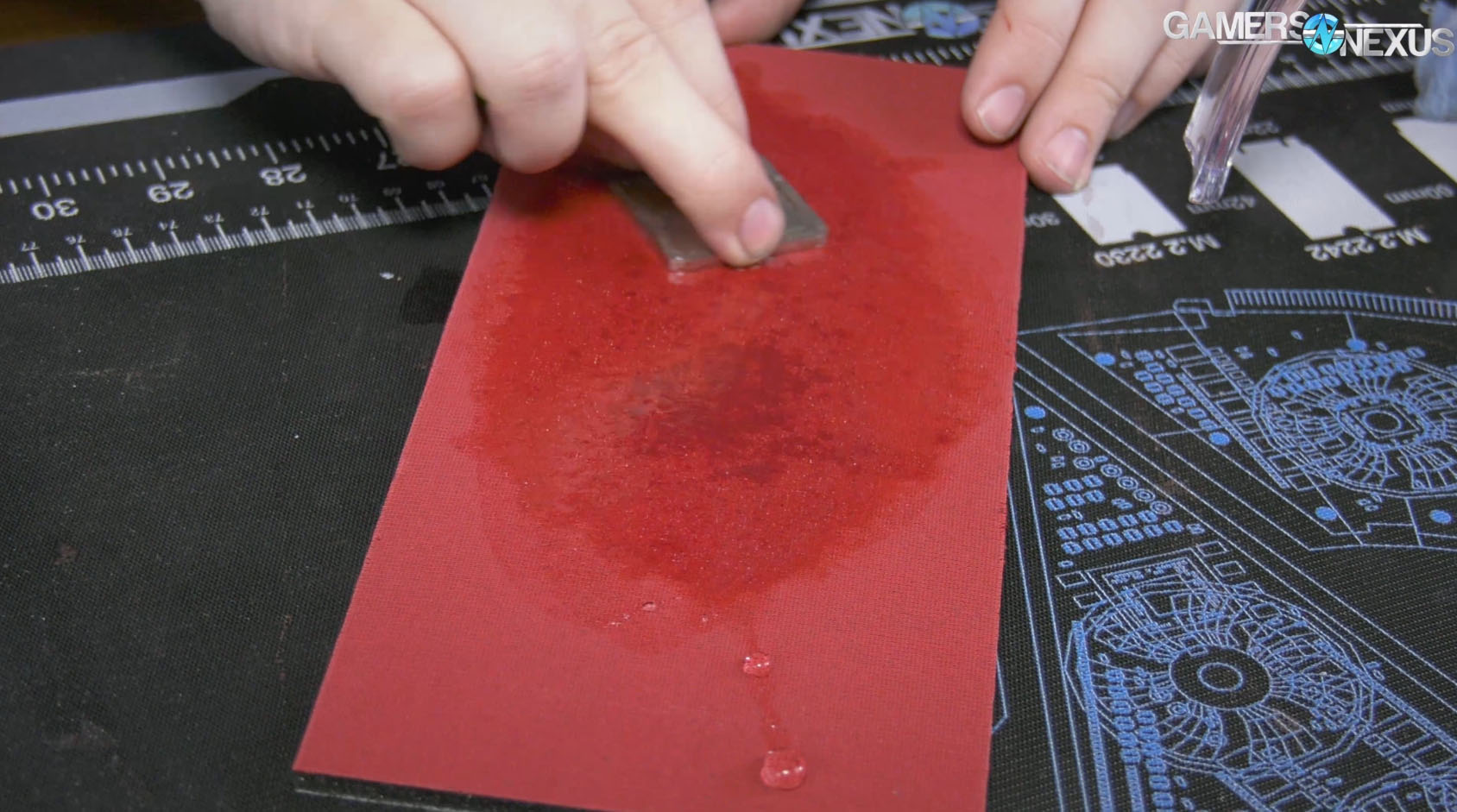 We finally polished and buffed the IHS, then ran it through our testing.

First a note: We’re jamming 1.4V into the APU at just 3.8GHz for the CPU clock speed. The GPU component is not put under load during this test, as we’re focusing on generating significant heat from power virus workloads that leverage AVX instructions exclusively. We also were not concerned about a maximum OC on the frequency, just with generating a lot of heat. The 1.4V does that. LLC 8 is used on the C6H. 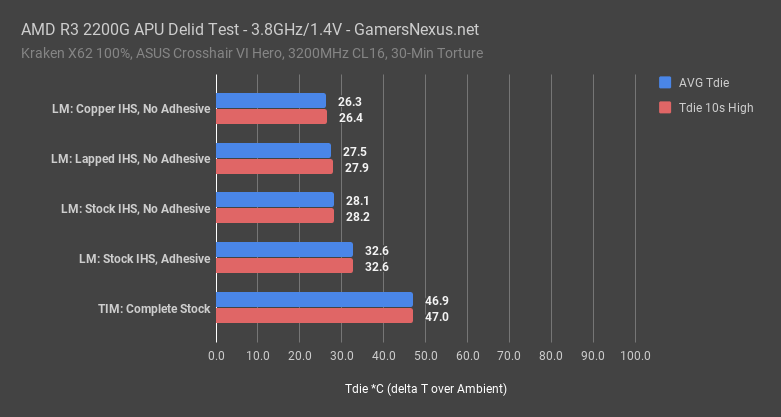 Previously, we were hitting 26.3 degrees Celsius over ambient for the Rockit Cool IHS without any silicone adhesive, our best thermal result. The stock Ryzen IHS without adhesive and without lapping held a 28-degree result, which is just barely outside of our error margins for this testing. Functionally, they are the same result, though measurably different. The stock IHS with silicone adhesive, which creates a bit of a z-height gap that needs to be filled with more TIM under the IHS, measured at 32.6 degrees over ambient. Complete stock was 47 degrees.

For our new test with the lapped IHS, we ran three test passes with newly applied Conductonaut liquid metal for each pass, found here, and averaged at about 27.5 degrees. We're within error margins for either flanking result, and so can say we've lost measurement resolution as to the differences. It looks like, logically, the results indicate we can get toward the Rockit Cool IHS thermally with lapping. It took more than $20 of sandpaper to get there, and so exceeded the cost of Rockit Cool's IHS, and also took an hour of time, but you can certainly push closer to its performance. Perhaps with even more polish, we'd be at equivalence. For now, the differences are outside of our measurement resolution. 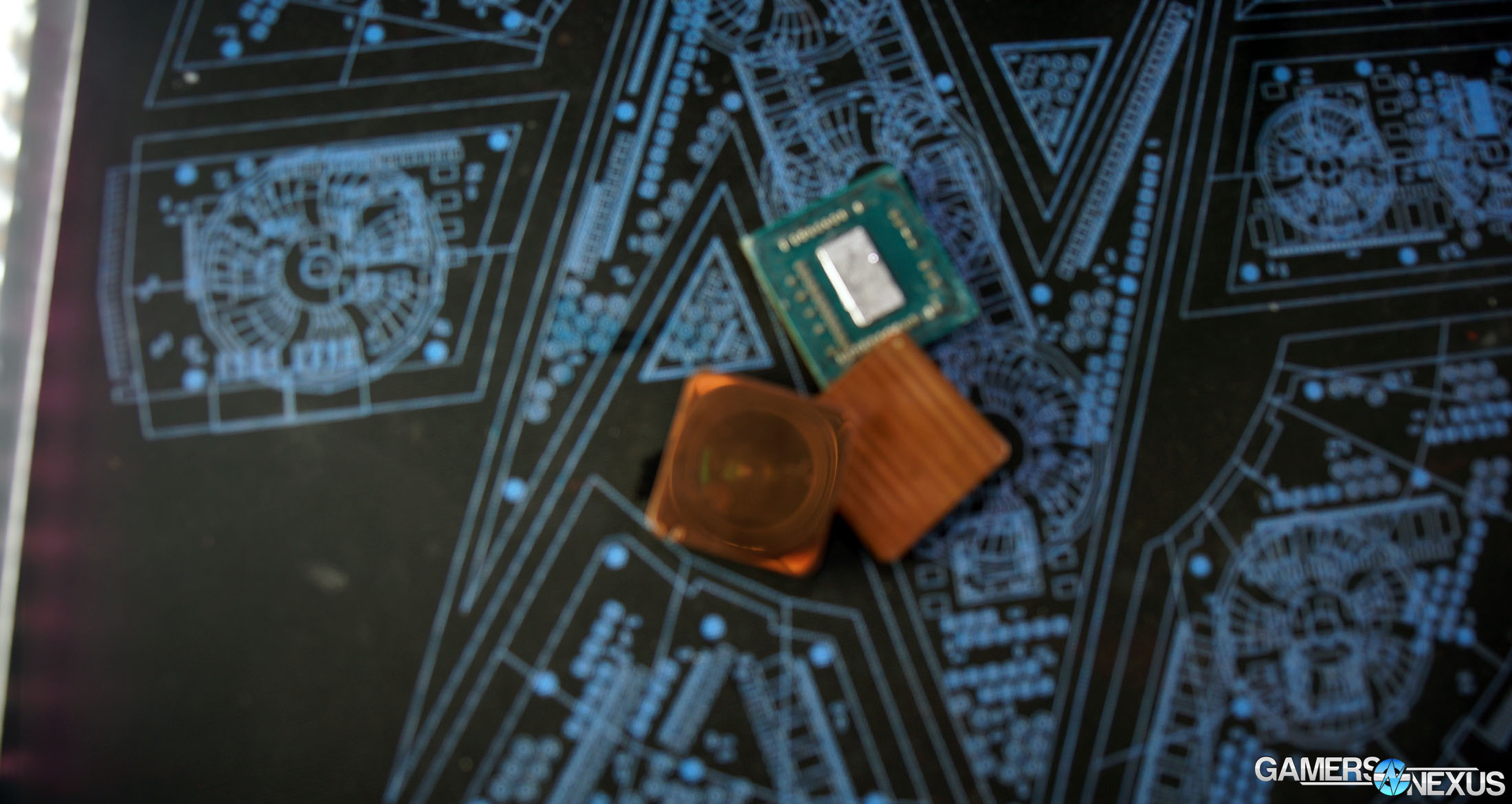 It’s not particularly exciting. You’d get far more gains just from a delid, liquid metal, and careful removal of all the silicone adhesive. It’s a fun project and we are outside of measurement resolution for differences between the custom copper Rockit Cool IHS and the standard IHS, and we think you could likely achieve equivalence with even more polish and sanding. That said, if you’re buying sand paper for this task, you’re already at price equilibrium with the Rockit Cool IHS (assuming they sell it again). Ultimately, none of this is necessary. The APUs run cool enough to not need it. Delidding is helpful and would allow you to run quieter fan RPMs, but beyond a delid, little can be gained from IHS modifications.

It’s still a fun project in that it makes the CPU more unique, though, and that’s part of the enthusiast spirit.