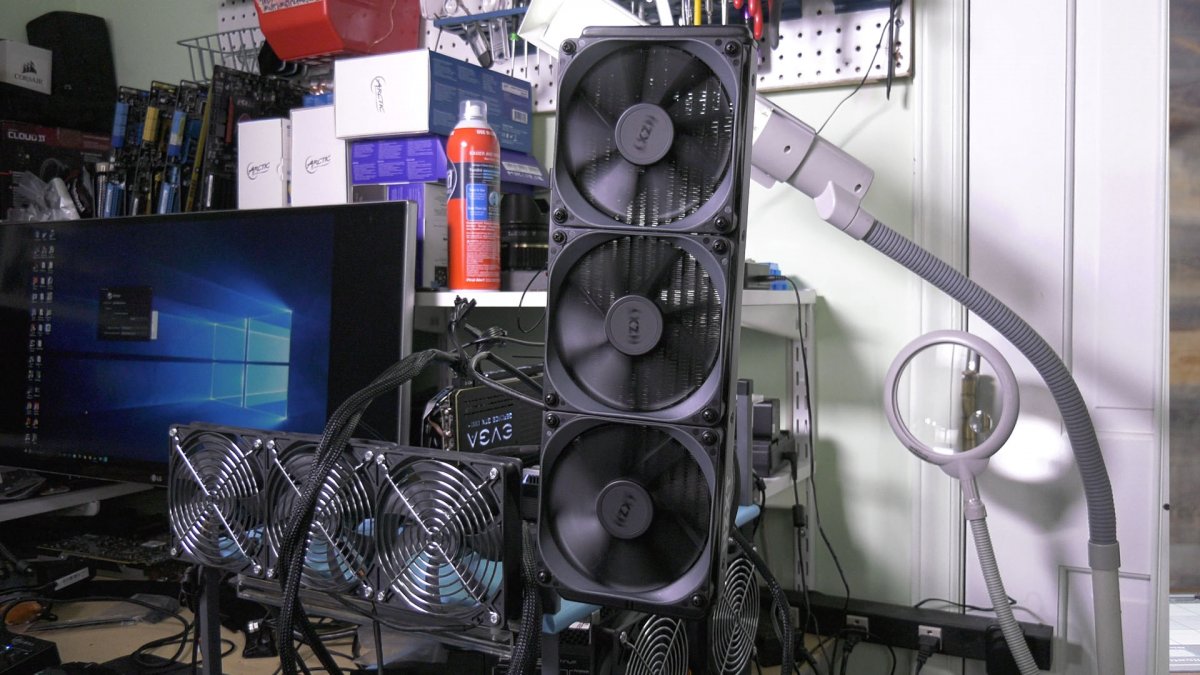 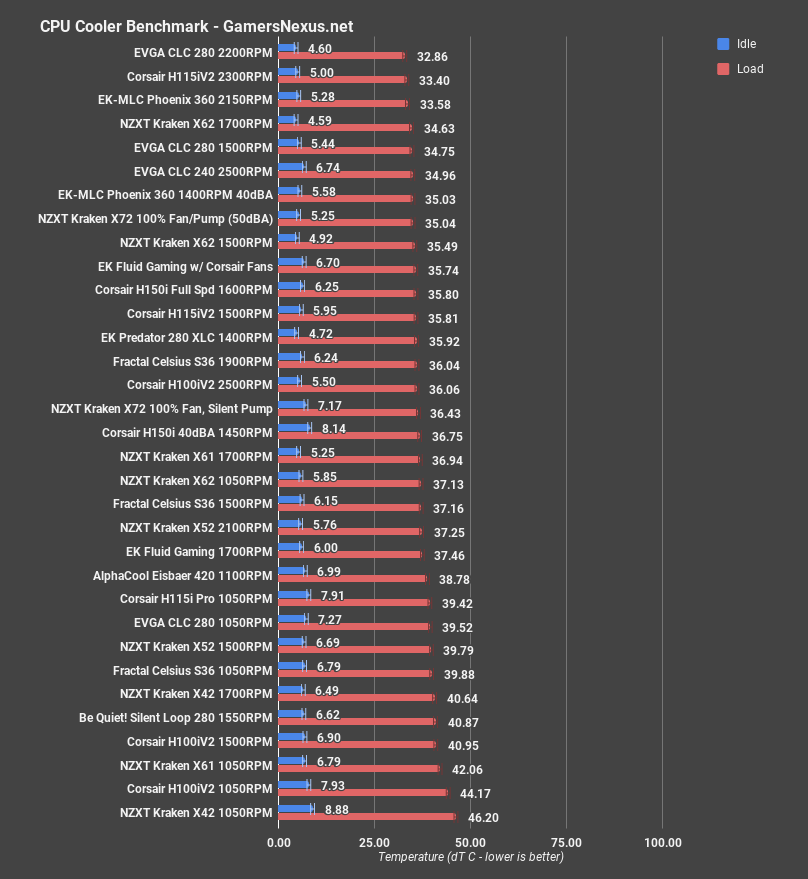 Tested at flat-out speeds, the Kraken X72 cooler maintains a steady state load temperature of 35 degrees Celsius over ambient, roughly equivalent to the Corsair H150i Pro at max speeds of 1600RPM, measuring at 35.8 degrees over ambient. The difference is within margin of error. The EK Phoenix 360 is an expandable loop with more open loop tendencies than closed-loop tendencies, and benefits from additional headroom at higher RPMs of 2150. The EK Phoenix does about 33.6 degrees at peak performance, using fans with 150RPM higher speed and an overall bigger cooler and block. Compared more fairly versus other 360mm coolers, the Kraken X72 is right around the H150i Pro and the Fractal S36 at 1900RPM, which is about 100RPM slower than the X72’s fans.

Running the X72 with 100% fan speeds and a silent pump setting, we land at 36.4 degrees over ambient. This marks it as roughly tied with the H150i Pro at 40dBA and H100iV2 at max fan RPMs – a significantly louder cooler, but one which performs equivalently when slowing the X72 pump. 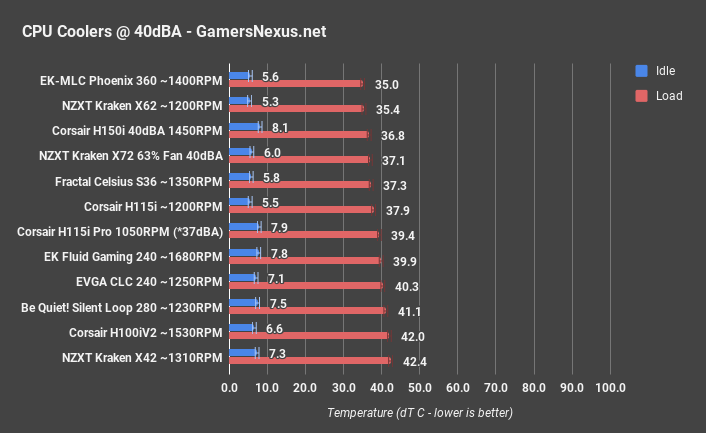 Noise-normalized testing is done to equal the playing field of the coolers, setting all of them to the same total system noise level of 40dBA. This allows us to test overall efficiency and efficacy of cooler and fan design.

For noise-normalized cooling performance at 40dBA total system noise, the Kraken X72 at 63% fan speeds measured at 37.1C over ambient. This plants us right between the H150i Pro 360mm cooler and Fractal S36 360mm cooler. These three numbers are all within margin of error of one another. There is no significant difference between coolers within +/- 1 degree of the result, and the X62 is also functionally equivalent when noise-normalized. Keep in mind that pump speeds are somewhat variable, with a 10% variance, contributing to some unit-to-unit differences, and the fan size of these coolers is also different.

NZXT’s X72 performance is about in-line with other high-end coolers. It is outdone at noise normalized performance by the EK MLC Phoenix 360, but that’s a very expensive cooling solution with semi-open loop possibilities. 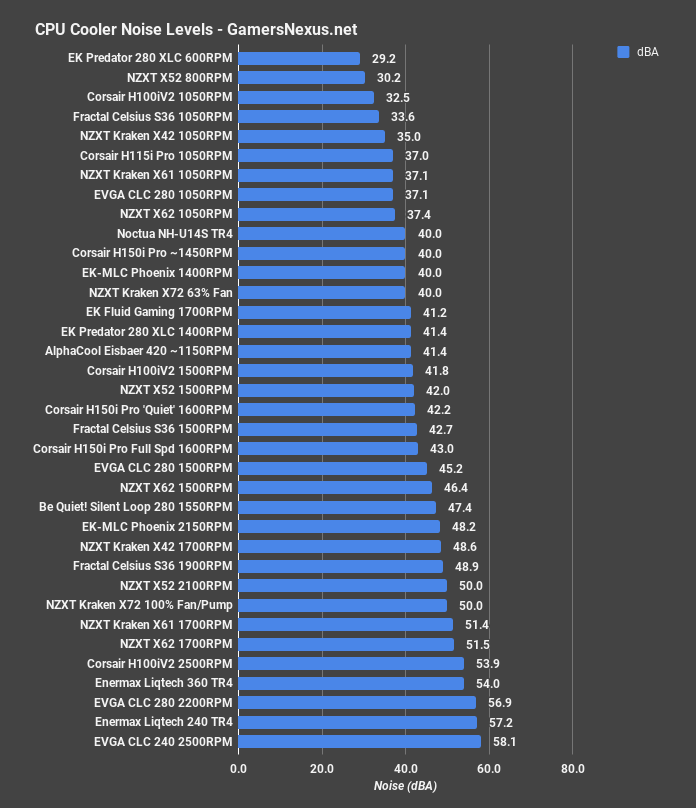 For noise levels, the stock Kraken X72 with full fan and pump speeds measures at 50dBA, the same as the X52 – a 240mm cooler – with max fan speeds, and also not far from the S36. 63% fan speeds hit 40dBA for this one. The silent pump setting doesn’t do much to reduce noise, but that’s because we had no issues with this pump making noise to begin with. Some Asetek pumps can be whiney, but this particular unit performed well and did not have meaningful pump noise.

Conclusion: Is the X72 Worth It?

There’s nothing wrong with the X72. It’s a bit pricey, yes, but it is functionally an OK product. We don’t have a firm, mechanical or technical reason to recommend against the X72. If it weren’t so expensive, we’d recommend for it. Ultimately, you’re left with a huge amount of closed-loop coolers that perform similarly to each other – close enough to be within margins, in the case of many 280s and 360s – and so choices have to be made based on looks and sale prices. If going for the absolute best deal for the dollar, EVGA’s CLC 280 is presently on an unbeatable (and seemingly indefinite) sale. If going for the best looks, NZXT does have one of the better-designed PCBs and RGB LED illumination features, and so finds its cost justified in that department. Corsair strikes a middle-ground between these two – it is not any meaningfully different in performance, has many of the RGB features, but sits at a middle-ground for price.

As much as we hate wishy-washy conclusions, this one really does come down to preference. For raw performance, don’t buy the X72 – it’s not meaningfully advantaged over its neighbors. For looks, NZXT has a good position in that aspect, and would be easily recommended for buyers with a lot of money. The X62 is every bit as good for cooling, assuming your case fits a 280mm CLC, and still has the same RGB LED features. That’d be a worthy alternative for a few bucks cheaper.