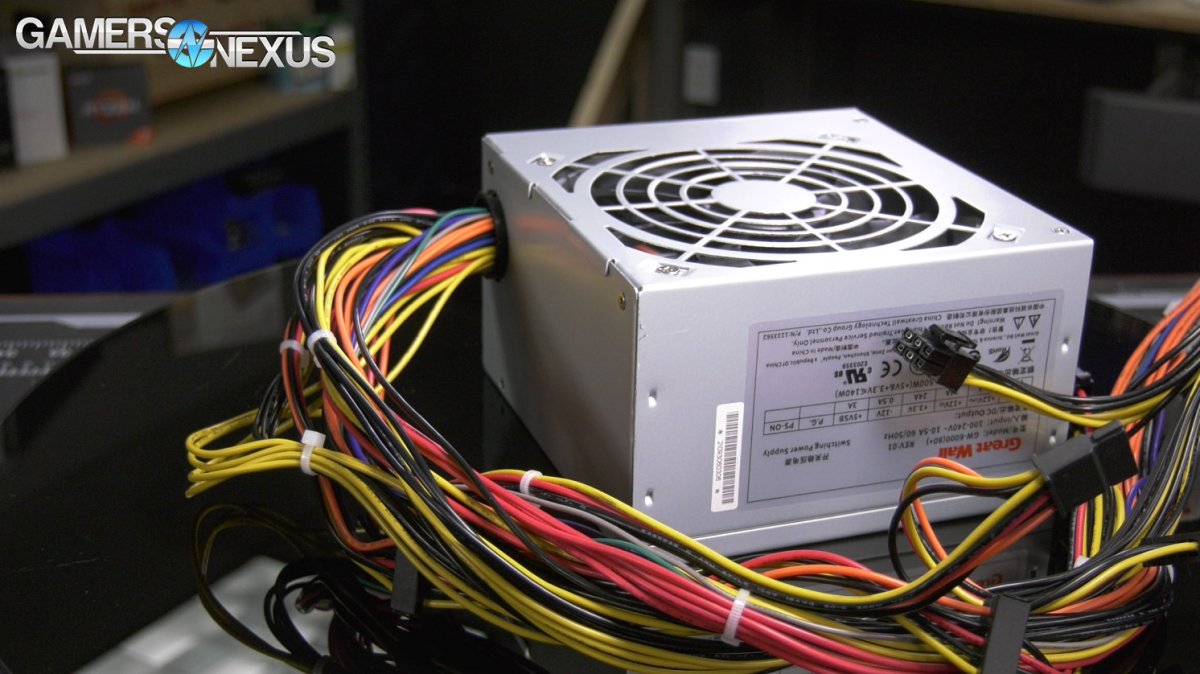 The comments section of our Walmart case review and system review tell the story of what people think of Great Wall: everyone is expecting a fire, as the shell of the PSU is uninspiring, its rating sticker is lacking some metrics (maximum 12V capabilities, for example), and the brand isn’t familiar to a western audience. The funny thing is that this would be sort of similar to hearing “Asetek” for the first time, then making fun of it for being foreign to the market. Asetek supplies almost all of the closed-loop liquid coolers currently popular in North America, but never sticks its own branding on those. Great Wall is also a supplier, including being a supplier to brands viewed generally positively in the Western market.

To be fair, everything about the Great Wall 500W 80 Plus PSU does look like a cheap power supply – and it is cheap – but there’s nothing that should indicate this is an exploding power supply. Great Wall’s association with Walmart here is probably hurting their brand more than the inverse, funny enough, but we’ll be digging into that today.

We previously mentioned that Great Wall actually is a supplier and makes PSUs for Corsair, for instance, as discussed in our Walmart case review. It’s uncommon to find Great Wall PSUs unbranded, and this one didn’t even have the maximum 12V capabilities listed, so this unit did attract criticism from the community. What we’re here to do is test whether it’s deserving of that criticism, using our power supply testing setup to benchmark efficiency, ripple, and over-current protections.

We are still finalizing our testing methodology for PSUs. We will be working on tackling the complicated problem of fan RPM-to-load response and noise levels this weekend. We already have a solution to these measurements, but we need to finish building some tools. Beyond that, we are also completely revamping our load level testing, but decided to work with formulae in part created by Jon Gerow (formerly of JonnyGuru.com) for now. These were good enough for him, so as we learn to review power supplies, they are good enough for us. We will be doing advanced OC and XOC testing to look at average load distribution across all rails, then will be using that in future over-current tests for OCP.

Thermal testing is also being advanced. We need to figure out which parts are most important to probe, then will add those metrics in. That shouldn’t be difficult.

All of this is very much “under construction” right now, but we did want to turn-around a set of basic efficiency and voltage ripple tests while we still had the Great Wall power supply, as it must go back. For load generation and monitoring, we are using a SunMoon SM-8800 and SM-220, with a Rigol 1054 oscilloscope for voltage ripple (looking at Vpp via BNC to the SM-8800). Ripple is being revised and improved so that we can show screenshots of ripple in future content, but again, we’re in a place where we just want to start getting some preliminary testing out there so we can find areas of improvement.

As for the rest, we have a Variac between the wall and the test unit, controlling voltage to 120V from the wall. We adjust the Variac before testing, then allow the load to impact Vrms as it wills, writing down all numbers during testing.

More detail to come on this soon. We need to finalize fan noise, RPM, and thermal testing, and then can put together a full document on how we’re doing our testing (at a top-level, anyway).

We still have a lot more to learn on testing power supplies properly and do not yet claim to be any sort of definitive source -- bear with us as we ramp-up and learn. Think of this as a "pilot" episode.

Let’s get an efficiency curve on the screen. For this one, we’re plotting the Great Wall 500W 80 Plus PSU in the Walmart PC versus an EVGA 500W 80 Plus model from about 2014. EVGA’s PSU is made by HEC, while Great Wall is the supplier of its unit. We’ll start with the Great Wall power supply.

Version 1.42 of the ATX Desktop PSU design guide will move toward standardizing a 2% load number, but most current power supplies fail 2% efficiency testing as the guidelines are still relatively new. At 2% load, Great Wall operates at 55.2% efficiency with an input of 18W and output of 10W, loading the 3.3V & 5V rails to 0.3A and the 5Vsb rail to 1.5A. This isn’t a high-end power supply, so as load tapers in either direction, efficiency falls hard. We can give it a pass at 2% load as this is still a new enough specification that it’s not being taken seriously yet; at least, not in budget PSUs.

At 10% load, the Great Wall unit is at 77.7% efficiency, which isn’t great, but 80 Plus doesn’t require any 10% efficiency until Titanium ratings. It’s 20% that starts to matter, where the Great Wall power supply is at 83.1% efficiency. That clears the requirement for an 80 Plus white label, which is 80% efficiency. 30% load has us at 84.6% efficient, with 40% at 85% efficient. This is the peak of the curve, as 50% stays roughly the same with 84.9% efficiency. 80 Plus certification requires 80% efficiency at 50% load, which this clears. It misses 80 Plus Bronze, but is close enough to error margins that we could give it a pass if it clears 100% load validation.

At 60%, we dip to 84.4% efficiency, then 83.4% at 70% load, then 82% at 80% load, and eventually hit 80.3% at 100% load. Despite there being no public report for validating this power supply at time of writing, and despite its lack of any official 80 Plus certification and branding, which does cost money, it looks like this unit is at least 80 Plus efficient and is bordering on bronze efficiency, although the Plugload group will have better test resolution than us.

Let’s look at the EVGA power supply next.

This one is 56% efficient at 2%, 76% efficient at 10% load, and is exactly tied with the Great Wall PSU at 20% load -- or 83.1% efficiency – while trailing off after that. The EVGA PSU hits 84% efficiency at 50% load, before dipping towards 80% efficient at 100% load. We also included overload measurements, where the Great Wall PSU does 77.7% efficiency when loaded to 615W output, or 792W input, which is really pretty damn good. We’ll talk OCP and current figures in a minute. The EVGA PSU at the same 615W load with the same current distribution does 75.4% efficiency at 123% load. Again, not bad. Both of these power supplies can sustain more than they advertise, which is always a great thing to see. This was measured after a 40-minute load period to allow the PSU to reach steady state temperatures internally.

To put these percentage numbers into perspective, here’s the input vs. output power plotted for just the Great Wall power supply.

This chart really helps visualize the efficiency curve with real numbers. This is power in versus DC out on the power supply. DC out would be what your PC receives (and likely requests), while the input is what is required in the AC-to-DC conversion process. In terms of percentages, this power supply is its most efficient at 40% to 50% load, and trails-off toward the end of testing. 2% load is the least efficient of all, but because we’re talking percentages versus absolutes, that isn’t necessarily obvious on this kind of chart. The previous chart would be better for that, but this one helps visualize actual power input and output.

Voltage ripple is one of the most important metrics for determining the quality of power delivered to a system. A PSU can be efficient while still having bad ripple characteristics, which could introduce system instability or reduce overclocking headroom. We are using a Rigol 1054 scope connected to the SM-8800 via BNC for this testing, measuring Vpp for ripple.

The other rails are less important, the worst of which is 5Vsb towards the back-end of the testing. 12v ripple is better than one might anticipate if going solely based on the amount of comments calling for the explosion of this PSU. Again, it’s still not a great part, but it’s not going to cause instability issues as a result of ripple.

Even though we said in our Walmart case review that Great Wall is a pretty common supplier, most of the concerns were still about the power supply “blowing up” or “catching on fire” as a result of overdrawing current. We tested OCP on this unit. Great Wall says that this PSU should be able to take at least 40A on the 12V rail, so we set the 3.3V and 5V rails at 3.4A, Vsb at 1.5A, then pushed the 12V rail until it hit 40A. The PSU ran inefficiently, but did not shutdown or overheat. This was for a minimum of 40 minutes to reach steady state. We then switched our SM-8800 into amps mode and increased the current until we hit a breaking point. For the Great Wall 500W unit, that breaking point was approximately 56A, demanding 672W down the 12V cables alone, or 707W total against all of our settings. Vrms fell to 111.95v, efficiency was 77.7%, and ripple was about 92mv on the ATX header and 88mv on the EPS and 12v headers, but overall, it did survive.

The PSU ended up tripping OCP and safely shutting itself down when pushed this hard (~52A-55A triggered trips quickly, 56A was an instant trip). At 50A, or 123% total power, it continued operation and did not trip any protections, as it was not at any major risk of catastrophic failure.

Conclusion: Not So Bad

The power supply is actually “fine.” It’s really not offensive. The Great Wall 500W 80 Plus unit in Walmart’s Overpowered DTW1 gaming PC is, perhaps shockingly to some, one of the least offensive things that Walmart’s partners did when building this product. The case is truly horrible, as we’ve demonstrated, the parts selection is overall poor (H310 chipset limits DMI speed, even), the assembly is questionable (cables disconnect on arrival, in a few cases), and the value is bad. The power supply, however, will not “blow up” under any normal conditions. We tested it overloaded to 615W and it survived, and beyond that, OCP trips and triggers a shutdown.

Now, the power supply is still bad value for the buyer of a $2000+ computer. Ripple is fine, efficiency is fine, but we’d like to see something better than “fine” for that kind of money. Even the DTW1 is sort of pushing it.

Alas, as a power supply, it is simply OK. Not bad, not amazing. Walmart still should have done better on just about every aspect of this system, but it will probably not blow up.