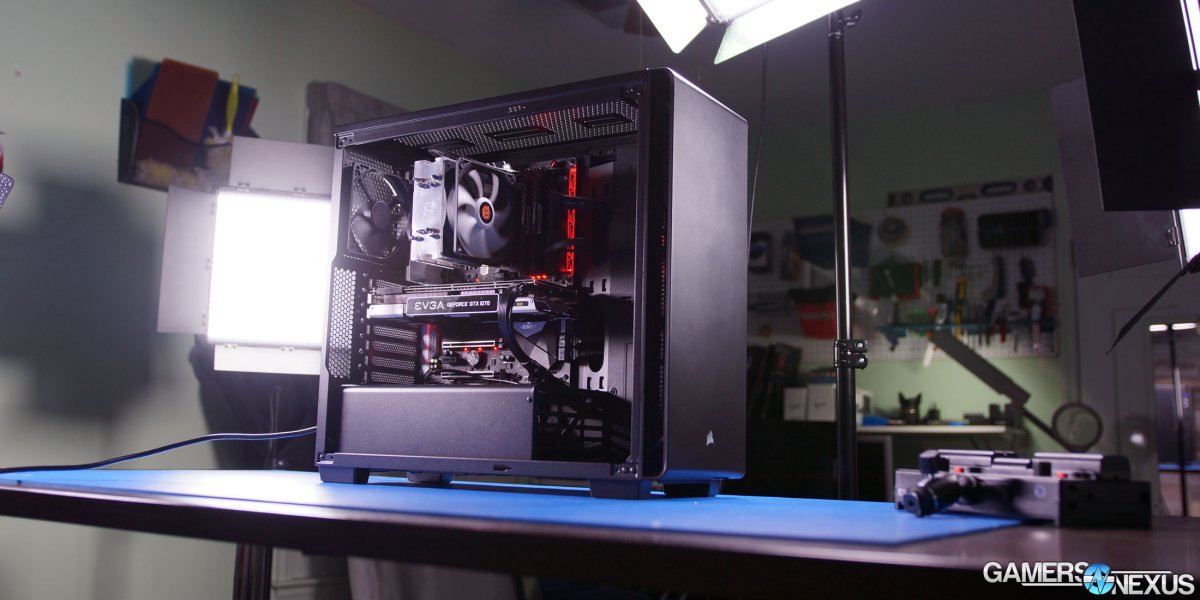 It’s been a few months since our last PC build--in fact, it was published well before Ryzen was released. For our first post-Ryzen build, we’ve pulled together some of the components we liked best in testing to make an affordable ultrawide gaming machine. As we did in January, we pulled parts out of inventory and actually assembled and tested this PC to back up our recommendations--we’ll try to continue doing this going forward.

This gaming PC build is priced at just over $1000 -- about $1200, depending on rebates -- and is made for UltraWide 3440x1440 gaming. Our goal is to take reasonably affordable parts and show that UltraWide 1440p gaming is feasible, even while retaining high settings, without buying the most expensive GPUs and CPUs on the market. We’re only using parts in this build that we actually have, so that partially dictates cost (yes, you might be able to do some things cheaper -- like the motherboard), but it also means that we’ve had time to build, validate, and use the system in a real environment. In these early days of Ryzen as a new uarch, that’s important. We’ve done the hard work of troubleshooting a functional build. All you’d have to do is assemble it, configure BIOS, and go.

As a note: This build is also readily capable of production workloads. CUDA acceleration on the GTX 1070 will work well for Premiere renders, and the CPU thread-count will assist in CPU acceleration (like for streaming).

How to Build a Gaming PC

LG 34UC87M-B ($762): The cost of this monitor is over half what our total build costs. You don't have to buy this display -- there are plenty of UW displays out there, this is just what we happened to use and like. Considering that a display like this can last for years and outlive the system build itself, it's not a bad investment to go with a high-end monitor that can be transplanted moving forward. The screen is 34" wide, slightly curved, and runs the 21:9 aspect ratio with 3440x1440 resolution we're targeting.

EVGA GTX 1070 SC ($400): The GTX 1070 chosen for this build is the most expensive individual part by far, but it still places a very obvious bottleneck on the system (given our 1440p UW requirement). In our R5 review, we overclocked the 1600X to 4.0 and 4.08GHz and saw decent improvement, but there was none of that here. 3440x1440 means that the ultrawide monitor has roughly 2.4 times as many pixels as the 1920x1080 monitors we use for CPU testing, placing much more load on the GPU while gaming. Although the 1070 is a strong (and expensive) card capable of supporting ultrawide resolutions, it’s the #1 component on this list that would benefit from an upgrade, which would mean buying a different card--there’s very little room for overclocking, as we discussed in our review. The Black Edition GTX 1070 is $60 cheaper than the version we reviewed, but some quick research reveals that the only significant difference is the lack of a backplate.

Performance was most impressive in Overwatch and DOOM. Despite GPU limitations, Overwatch ran at 60+ FPS (80 average) at maximum settings, and rose to 108 FPS average when shadows, local fog detail, and reflections were adjusted to medium, as our Overwatch optimization guide recommends. A 4.0GHz CPU overclock had an improvement of only 2 FPS. DOOM (using Vulkan) also had a 0.1% LOW average above 60 FPS, with a very playable 84.6 FPS average. DiRT Rally performed similarly, also at the maximum “ultra” preset.

Despite the 1600X’s good record with Total War: Warhammer, the Ultra framerate in the benchmark at ultra settings did dip below 60 FPS, again that’s because of a GPU bottleneck at the high resolution. Dropping to the high preset, average framerate rose back to 80 FPS.

This build is capable of running modern games on an ultrawide monitor at 60+ FPS with high to ultra settings. For more than that, take a look at our 1080 Ti review.

Like the R7 CPUs, the non-X variants of R5s appear to be basically the same chips with a lower stock frequency. A 1600X was used in this build, but it would be possible to save another $30 with no performance loss by buying a 1600 and overclocking it. Again, we didn’t see any significant improvement by overclocking to 4.0GHz at 3440x1440, so buying the less expensive CPU is a good option at this resolution (particularly if overclocking isn’t an offensive idea). 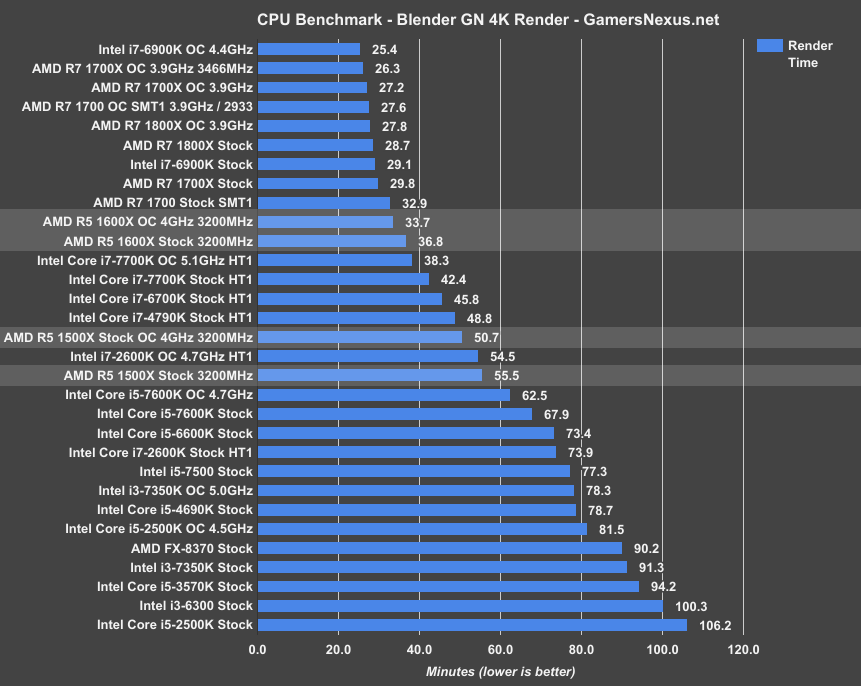 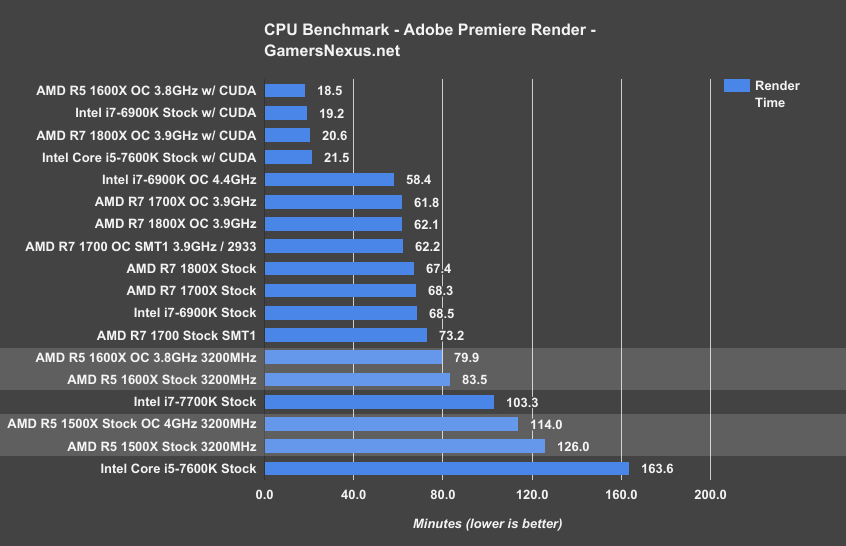 We already ran a full course of synthetic benchmarks on the 1600X in our review, but these results confirm that our build is working as intended, despite being slightly restricted by its memory speed.

Thermaltake Contac Silent 12 ($25): One of the messier aspects of Ryzen’s launch was lack of AM4-compliant coolers, but Thermaltake was one of the few vendors able to ship heatsinks from the beginning. The Contac Silent 12 may be a plain, inexpensive cooler, but it’s a lot better than nothing, which is what this 1600X ships with. All of our published Ryzen CPU testing has been with the massive Kraken X62 AIO, but we’ve used the Contac Silent 12 off and on and have been satisfied with the results--for $25, it’s one of the cheapest third-party AM4 coolers out there, and it works.

Logged CPU temperatures didn’t rise above about 63 Celsius, which is in the safe zone: we saw the frequency lock down at 3.7GHz with all cores under load (as intended), with no thermal throttling encountered.

Gigabyte X370 Gaming 5 ($195): One downfall of AMD’s inexpensive R5s is the lack of good, inexpensive AM4 motherboards to match. This is more of an availability problem than anything, though stock is getting better by the week. We’ve used the ASUS Crosshair VI for most testing since, after EFI updates, it’s reliably worked with high-frequency memory and recovers quickly from failed overclocks. The Crosshair VI also costs $255 on Newegg, which is more than a 1600X. The Gaming 5 costs a good bit less, but it also gave us some problems trying to run memory at 3200MHz, which is part of the reason that a 3000MHz kit was chosen for this build. The most recent BIOS revision was published on April 10th, so clearly issues are continuing to be ironed out. We were able to run 2933MHz without issue. 3200MHz could be had if willing to invest somewhat disproportionate amounts into memory, but given DDR4 prices right now, we think it makes more sense to level off at 2933 with this board/CPU combo.

Corsair Vengeance LPX 3000MHz ($70): Initial problems with Ryzen high frequency memory support have subsided a bit, and our tests show that memory overclocking really helps. At the same time, RAM prices are completely ridiculous right now and don’t show signs of improving. We used the 16GB SKU of this Corsair kit in our initial 2933MHz R7 tests as it was one of the first to be certified compatible, and we included it again in this build to avoid paying the full 3200MHz price, and because there’s a less expensive 2x4GB SKU available. It may be possible to overclock this memory beyond 2933MHz, but at the time of this writing, that was proving difficult with the Gigabyte Gaming 5.

Corsair CX550M ($60): A 550W power supply is sufficient for this build, especially without any overclocking. The 550M is a solid, middle-of-the-road choice, with semi-modularity for clean cable management behind the 270R’s big acrylic side panel.

Corsair 270R ($70): The Corsair 270R received our Editor’s Choice award back in November, and we were happy to be able to put it to use again. Make sure to read that review for our full impressions, but if the $10 rebate is no longer being offered, our “hwreviews” tag contains many other mid towers in the $70 range that may go on sale.

This build is ever so slightly quieter than the one we used in our 270R review, but that could change with more fans added. We did not find more fans to be necessary given the thermals under various load levels. This case works just fine as-is with max fan RPMs.

That’s all for this one.