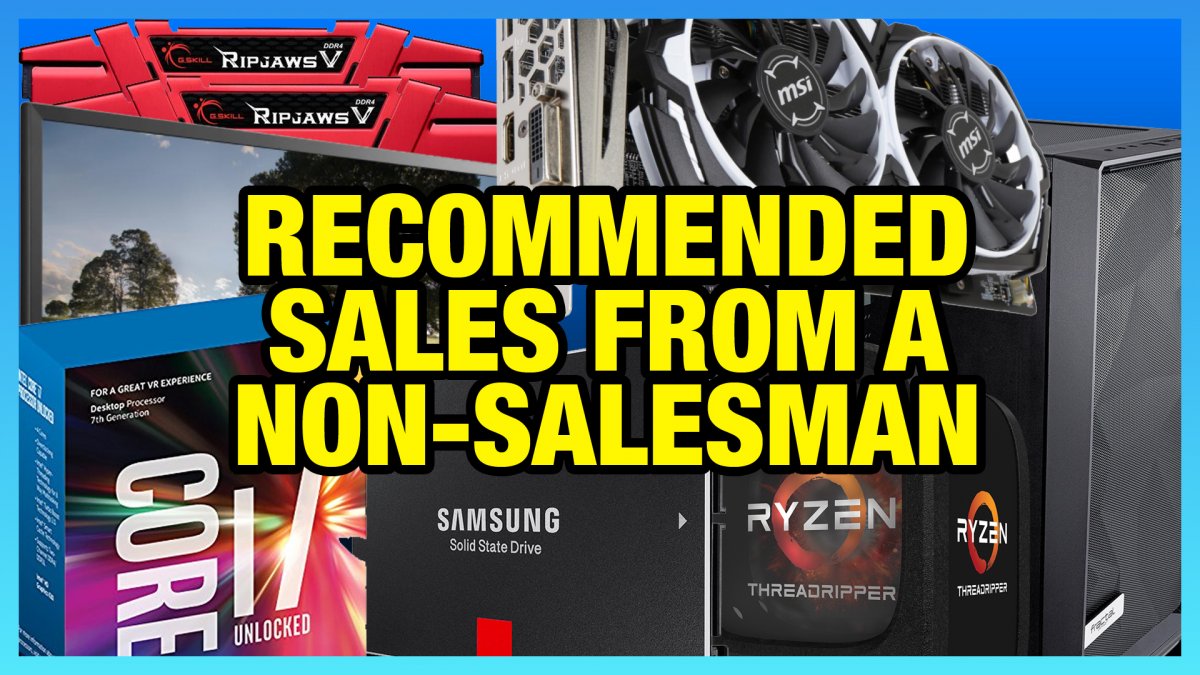 This was largely a video-focused content piece, but we’re providing the show notes below.

The biggest sale weekend of the year is coming up, and we’re not very good salesmen. What we’re going to do is highlight a couple of actually good sales, tell you what’s wrong with them, and then let you decide if the good outweighs the bad. We’ll be pulling a couple components from each major category. We’ll put timestamps on the left in the video with the respective categories. We have a GTX 1080 Ti also coming out today.

Before getting started, one of our current advertisers (iFixit) also has a few promos and sales going. They did not sponsor this content (but are an active advertiser), though we figured we’d point you over there for tool purchases for things we actually use daily.

Intel CPUs: So, full disclosure, our original plan was to have the timestamp jump to Intel sales and then only last a second and be a black screen, because we almost never see Intel CPU sales ever. Looks like they have some this year, though. The i7-7700K (Amazon) – which is still a good CPU, by all accounts – is a good pick-up, and at time of publication, is on significant mark-down from its old price of $330-$350 (currently $290). The CPU also presently comes with Assassin’s Creed and Total Warhammer II, which is worthwhile, and is easily overclockable to 4.8-5.0GHz, depending on how lucky you are and how good your board is. Don’t bank on 5, but give 4.8 a shot. It’s no 8700K, but for most gaming workloads, it’s still nearly tied for first place in FPS.

Cases: Cases have some actually good sales. These are a little more exciting, and many of these won awards from us over the year. The Fractal Meshify C is available between $70 and $80, depending on which retailer you look at, and the Define C is also around that price. We liked both cases, though you should buy a fan to go with them. The Corsair 270R is now available at around $55 on Amazon, down from its $70 MSRP. We also liked the 270R as a budget case, and this new price makes it one of the highest quality in the $50 tier. The NZXT S340 is about $50 after rebate, if you count that, and remains one of the better mid-towers. Finally, the Rosewill Cullinan, which we showed as decently cooled, is now priced at $75 off its original MSRP on Amazon. This one is a pretty serious deal. We can recommend it at that price.

SSDs: For SSDs, we spotted the Crucial MX300 SSDs marked down to $80 for 275GB and the MX300 525GB for $130. These might sound like sales, but we looked at our order history from 2016: We bought these drives at the same prices last year, so looks like it just says “sale,” but it’s actually ye olde mark-up/mark-down game. Skip these, then. It’s not really a sale.

For something more reasonable, we also saw the Samsung 850 EVO 250GB SSDs for $90 on Amazon right now (list price $150), which would be decent for a boot drive that doesn’t need as much performance as the Pro. We bought two of these for test benches.

Motherboards: We can recommend the Gigabyte Z270X Gaming 7 for the 7700K pairing, if you’re trying for a higher OC. This is the board we use for our GPU test bench. The ASRock Z270 Extreme 4 is way cheaper, but not nearly as well-built for overclocking. It’s good enough to run with a light OC and direct airflow on the VRM, though. For AMD, we already have an entire video dedicated to overclocking motherboards, but you could grab a cheaper B350 ASRock Pro4 for a really good price right now. That’s at $75, as of making this video. $55 if you count rebates. It has the least terrible VRM heatsink of all the B350 boards. You’ll still want airflow on the capacitors to prevent 5000-hour burn-out, if you’re pushing heavier OCs on 8 cores, but this one will be mostly fine for a light OC on a 6C CPU.

PSUs: For PSUs, we saw the EVGA SuperNOVA 650 G2 for $70 after rebate, or $85 normally. That’s one of the better mid-range PSUs. If you want something dirt cheap that’s kind of mediocre, but will get the job done for an ultra-budget build, the Corsair CX650 non-modular PSU is $50, marked down to $40 after MIR. It’s not a favorite, but it’s fine for something basic and cheap.

Monitors: One of the better deals we saw was the LG 27UD58P 27” display. It’s an IPS panel with a native 4K resolution at 60Hz, coupled with FreeSync and a 5ms GTG response. It’s not the fastest response in the world, but at $300 for an actual sale – not one of those where they mark it up and then d own – it’s a pretty good price and value overall. This isn’t something you buy for perfect picture quality or flawless latency and response, but if you want 4K on the cheap and with still reasonable image quality and still playable response, this one’s worth consideration. $300 is making 4K gaming a lot more playable. We’ll have some GPU recommendations in the GPU section to go with this display. This one is cheapest on Newegg, but Amazon has it for $368.

For an absolute dirt-cheap monitor, we found a 1080p 23” unit with a 5ms GTG available for $90 after a promo code. You could throw-in a $10 rebate and make it $80, but we generally don’t count those toward the price, these days. Still, at $80-$90 for a 1080p display that’s not absolutely hated, we thought it might be worth pointing-out for ultra-budget buyers.

RX 580s: OK, so this one is pretty sad, but hear us out. The RX 580s are now down to MSRP – so $240 to $250 for an 8GB model, or $200 to $230 for a 4GB model. Typically, you’d scoff at this and say it’s just MSRP; well, you should still scoff at it and it is still MSRP, but the prices are a lot better than they have been for the last 6 months. In the very least, we figured we’d let you know about the return to normalcy. The best RX 580s are still $280, like the Gaming X or the Nitro, but the PowerColor Red Dragon and MSI Armor are available at the $240-$260 range. The main trouble with this is that the VRMs will run a little warm and the fans might spin a bit louder, but if you have adequate airflow in your case, you’ll be fine. You may want to pick up a thermal pad for a quick mod, in the event coil whine becomes a problem. Throwing a thermal pad onto the inductors will often solve that. We’ll link to some thermal pads below.

RAM: We found some RAM sales. No, that’s not a joke. Well, not really. OK, it’s actually just depressing, at this point, but we did find “sales” on RAM that was “marked down” from the price it’s been for the last 8 months.