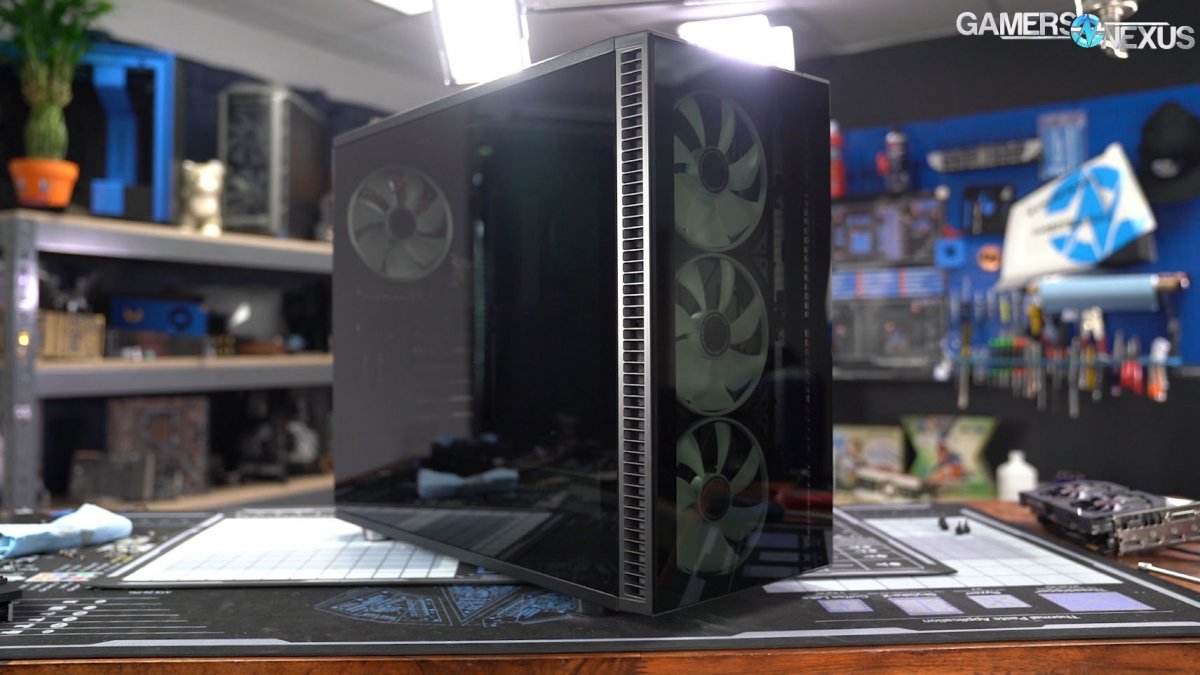 Fractal’s Define S2 Vision RGB takes the glass-and-LED approach to cases that most manufacturers discovered a few years ago. This particular approach, as we’ve discussed in years prior, is to take an existing chassis that’s reasonably good, then glue glass to metal panel carriers and stick some RGB LED fans in the case. It’s a few minutes of PM work, but allows a case to be refreshed and upsold for more.

The trouble is that Fractal has already used this particular body in minimally half a dozen SKUs, with the R6 serving as the baseline, the Define S2 following, the S2 Meshify after that, and then all the variants with windows, solid panels, or color variations. We reviewed the R6 a while ago, and all those build notes apply here. We also reviewed the S2, where we said to read the R6 review for build quality notes. None of that has really changed, or at least, very little of it has.

The refresh is absolutely on the lazy side, as it really just is a re-refresh of a case with glass and LEDs. It’s an old approach to glass and LEDs. Although the body is fine, we need to see a lot more action to justify a $240 price, or $190 for the glass version without RGB LED fans (sticking a $50 price tag on LEDs alone).

The Build section for this case review will focus exclusively on changes to the S2 Vision. If you want full details on the S2 chassis, check our previous S2 review. It’s the same body. That review will probably tell you to check the R6 review, so it’s like a choose-your-own adventure of reviews because Fractal keeps releasing the same product.

The Fractal S2 Vision comes in two forms: There’s the RGB version that we bought, priced at $240 before shipping, or about $300 after we expedited it for review, and then there’s the Fractal S2 Vision Blackout for $190. The S2 Blackout has the same fan count at 4 140mm fans and the same glass panels, but drops the RGB LEDs from the fans and RGB LED strip from the case, immediately establishing that the buyer is paying about $50 just to add LEDs to the fans and a single strip to the case. Each fan comes with two cables: One plugs into the motherboard or the included fan hub for fan control and power, and the other one is an RGB LED cable that splits. The split allows ability to daisy chain the LED cables together, which might prove useful if trying to use motherboard controls rather than an external controller, seeing as few motherboards will have a total of 5 RGB LED headers available for each of Fractal’s RGB LED components. Daisy chaining the fans is a good solution to allow users to consolidate cables, but does create more of a mess with additional cable length and an unused cable end in the back-side of the case. The downside to glass on the right panel is, of course, that cables are exposed, so builders have additional motivation to try and clean-up the cable management. That becomes hard with this many RGB LED cables, and gets harder if adding a third-party RGB LED controller to the case.

The Vision S2 RGB doesn’t come with any LED hub or controller, but does come with the cheapest possible solution: a SATA-powered RGB LED switch with three buttons, findable on AliExpress for a couple bucks, that would likely end up inside of the system. Not very useful, then, and you’d actually be better off using motherboard software or a third-party controller that has remote control or software. Actually, you’d be better off buying a remote controllable RGB LED switch on AliExpress for 5 dollars. We’d rather see an RGB LED hub than a bunch of cable extensions, then an option to power that hub by a single motherboard header or by MOLEX or SATA power, if not one of each. This would reduce cable length as the need to daisy chain would be eliminated – it should be designed precisely like the fan hub, just for RGB LEDs. That single terminating connector would plug into the board for control. The included three-button switch would have to be routed out of the PSU cutout in the back, but that becomes difficult given that most of the wires are in the front of the case, like the LED strip for the case, which routes toward the front. Otherwise, you’re taking the panel off to push the buttons.

Fractal did this out of laziness or cheapness. The company is trying to reuse as much of its tooling as possible, as is illustrated plainly by the at-least-6 iterations of the R6 and S2 cases on the same chassis. It’s OK to stretch a tooling to get ROI, but this is a bit much. Not retooling the front to accommodate an RGB LED button is insulting to those who pay $240 for this case, and it’s about the level of quality we would have expected from cases 3 years ago, back when just adding glass and LEDs was enough to get attention. The game has been stepped-up since then, but Fractal is left floundering in the past while charging modern prices for a sub-par implementation of a feature that has proliferated every case on the market.

The saddest thing is that Fractal wouldn’t even have to retool. Some cases repurpose the reset button to become an LED control button, typically cycling through different LED patterns or colors. Fractal would need only relabel the reset cable to turn it into an LED cable.

As for things that have changed with the case, the radiator plate in the front-bottom of the case has more holes in it to better accommodate water cooling components, which is a good upgrade. It also has rails for mounting liquid cooling components and a cutout to fit the third fan in the bottom of the front. The case also comes with a filter for the top panel, the same as in the S2, and can replace the glass. This is only really recommended if mounting a radiator up top, as a positive pressure setup would not be benefited from a top filter.

A small attention-to-detail thing that Fractal did well was the blackout coverage on the side panels, which hides the seams and connection points of the steel to the glass sheet. 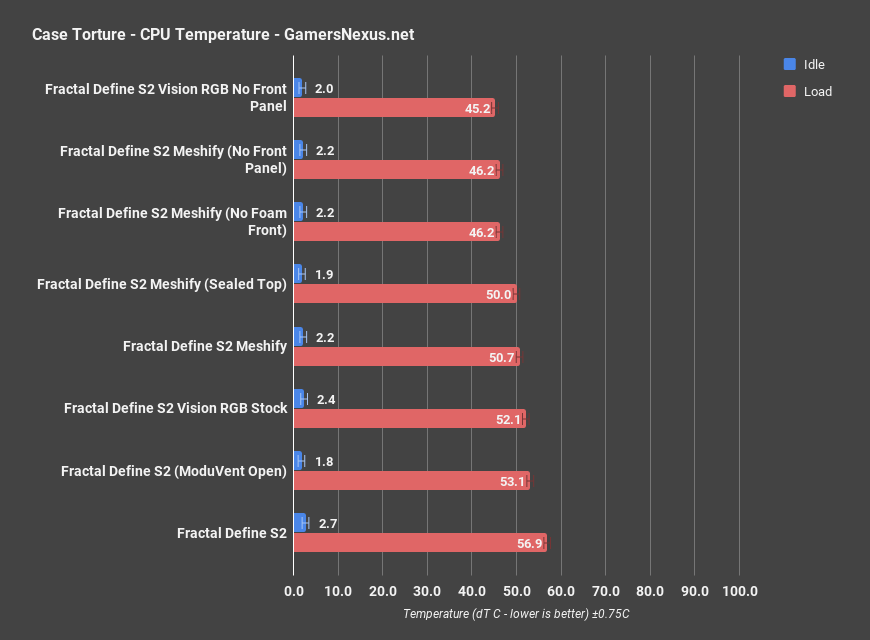 Starting first with CPU torture thermals featuring only the S2 Vision, the S2 Vision RGB manages a result of 52.1 degrees Celsius over ambient for full stock results. That places it as better than the original Define S2, marked at 57 degrees over ambient, and not distant from the S2 Meshify. Removing the front panel illustrates the degree to which air is obstructed, bringing us down to 45 degrees from 52. This actually isn’t all that bad, considering we’ve seen cases with drops in the 10+-degree range. All those fans in the Vision RGB are able to somewhat level performance by brute force, and this is something we’ve seen work in the past. 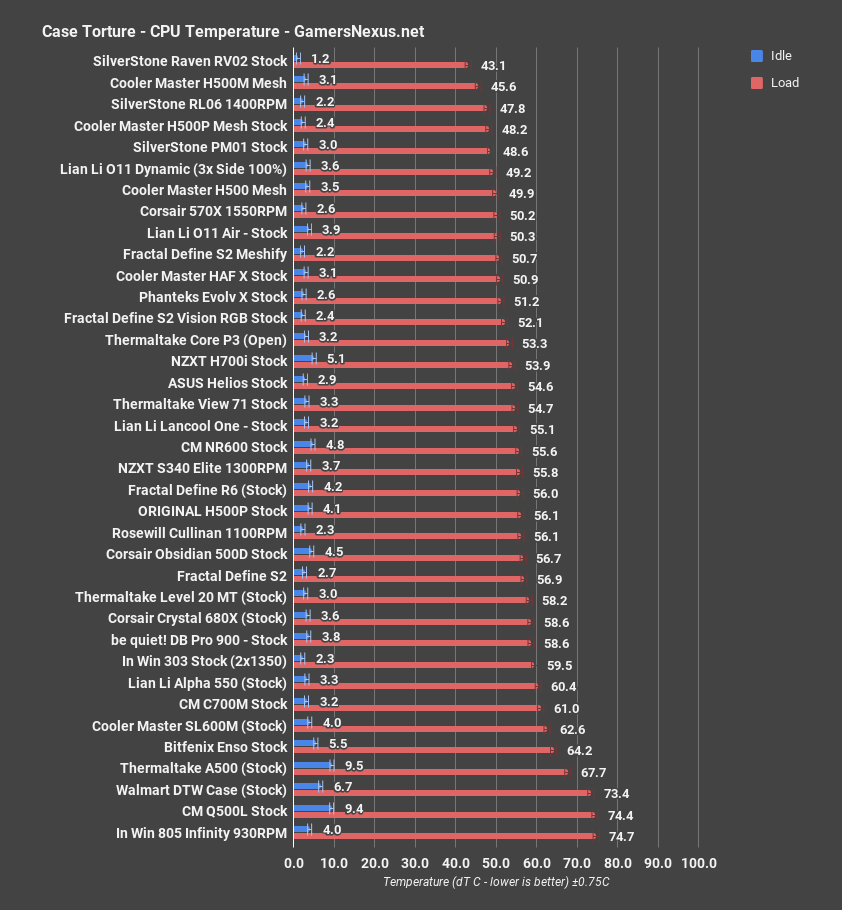 Comparatively, the Vision S2 RGB stock results end up in the top half of this truncated results chart. It’s within error margins of the Evolv X and not distant from the H500 Mesh’s 49.9-degree result. Although the S2 Vision is limited by about 7 degrees in our chart by its front panel, it’s still able to force enough air through to perform reasonably. We wouldn’t call its performance “good,” especially not with the number of fans present, but we would call it “acceptable,” it’s just that the price doesn’t justify the performance. You’re really paying for the glass and RGB LEDs, here. 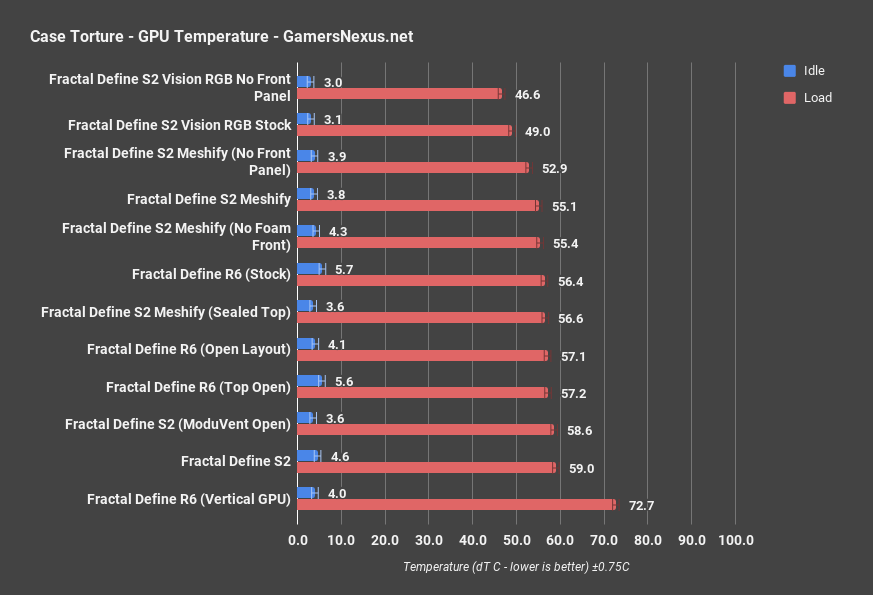 Looking next at GPU thermals just for the S2 and R6 cases, which all share the same chassis, the S2 Vision ends up at 49 degrees stock, which is the best of the stock results for Fractal’s new cases. The S2 Meshify falls behind by way of its fan positioning and quantity, something we discussed in the Meshify review. Removing the front panel entirely gives us a slight improvement to 46.6 degrees over ambient. We have a marked improvement over the S2 original case, ranked at 59 degrees over ambient.

Comparatively, the Fractal S2 Vision RGB ends up at 49 degrees over ambient, roughly tied with the Rosewill Cullinan of similar design. This is also within error margins of the Helios, the PM01, and the H500M Mesh. The Vision RGB ends up in the top half of the truncated results, and once again, performs reasonably well. 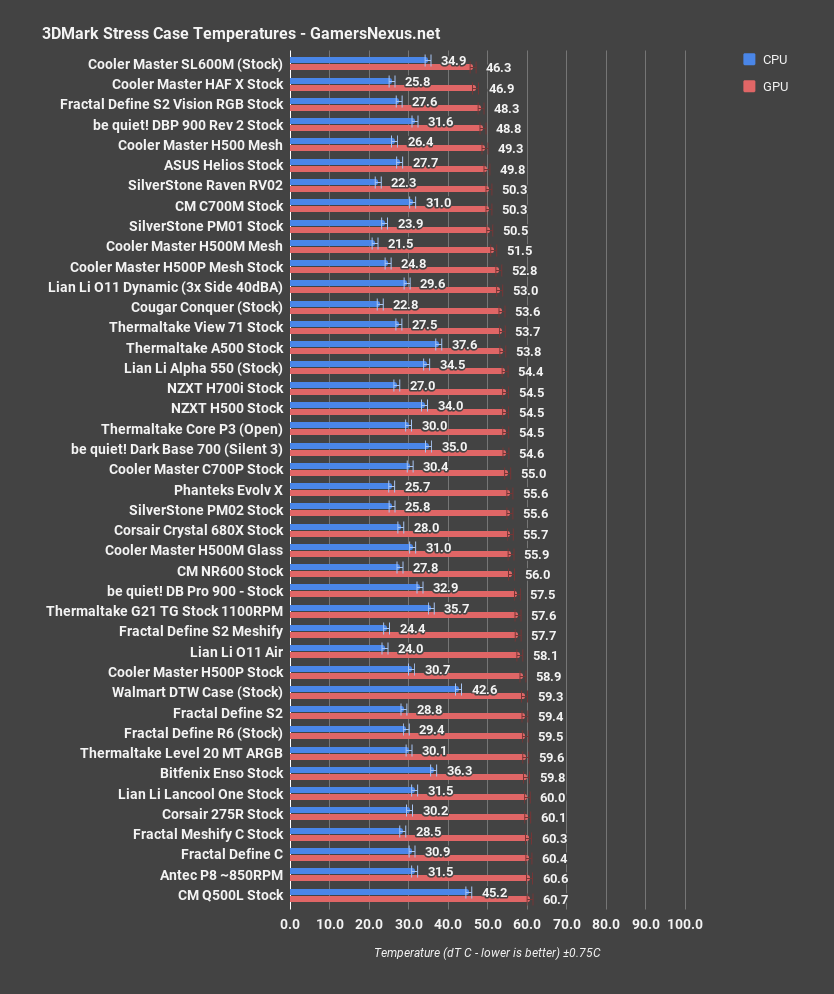 3DMark testing is typically stressful on the GPU, but less so on the CPU, providing a real-world gaming stand-in thermal benchmark. Under this workload, the S2 Vision ends up toward the top of the truncated chart, not distant in hard numbers from its torture performance, but the absence of heavy CPU workload seems to benefit the S2 Vision disproportionately. The case actually does well here, once again proving that brute forcing fans can work if provided sufficient air pathways. This is a large improvement over the stock S2 Meshify, but that’s because the S2 Meshify didn’t have as many fans and lacked some of the positional advantage that the S2 Vision’s fans offer. 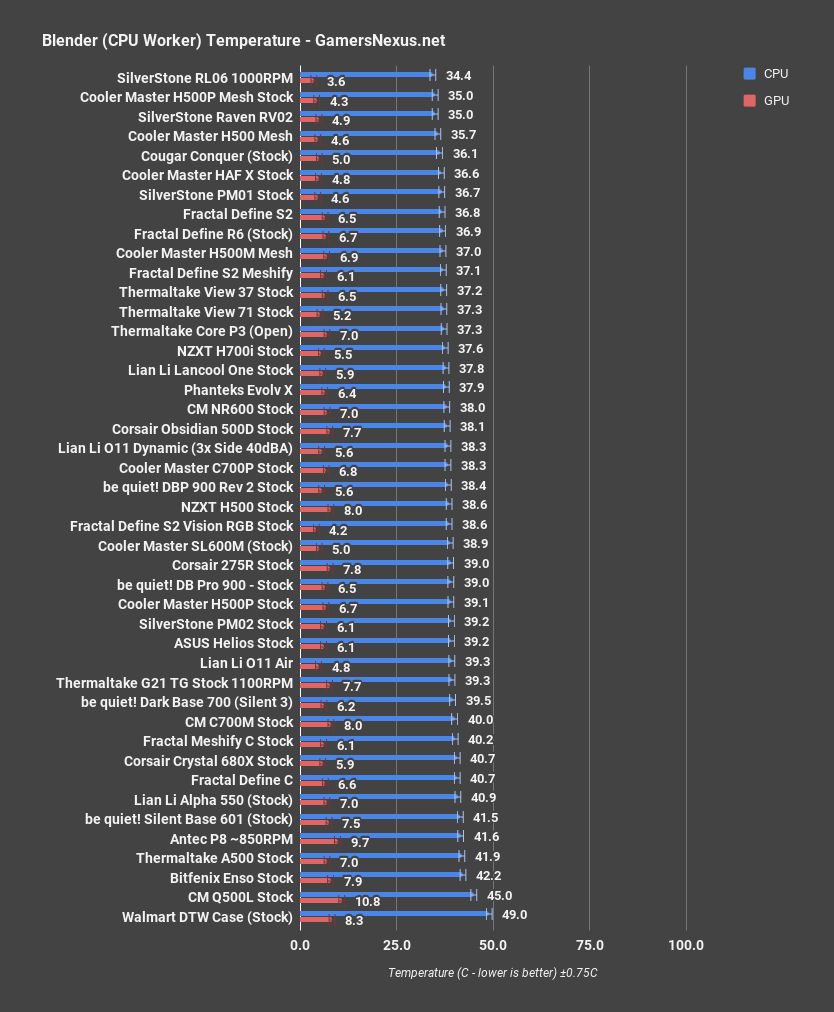 Blender GPU results put the S2 Vision toward the top of the chart, at 23 degrees over ambient GPU temperature. This ranks it as just behind the SL600M, which had some of the best GPU cooling we’d seen last year, but the Vision manages better CPU performance than the SL600M’s compartmentalized layout. 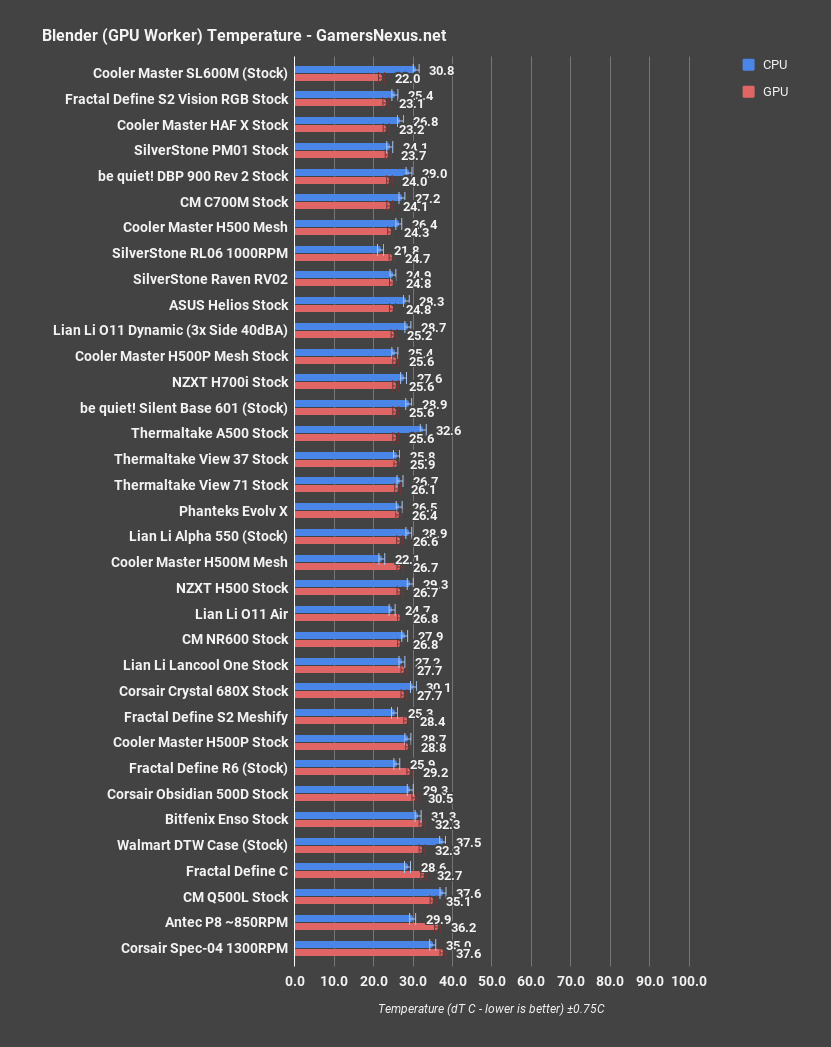 Blender CPU testing positions the S2 Vision less impressively than the GPU result, ranking it more toward the half-way mark and within margin of error of the H500 stock case. 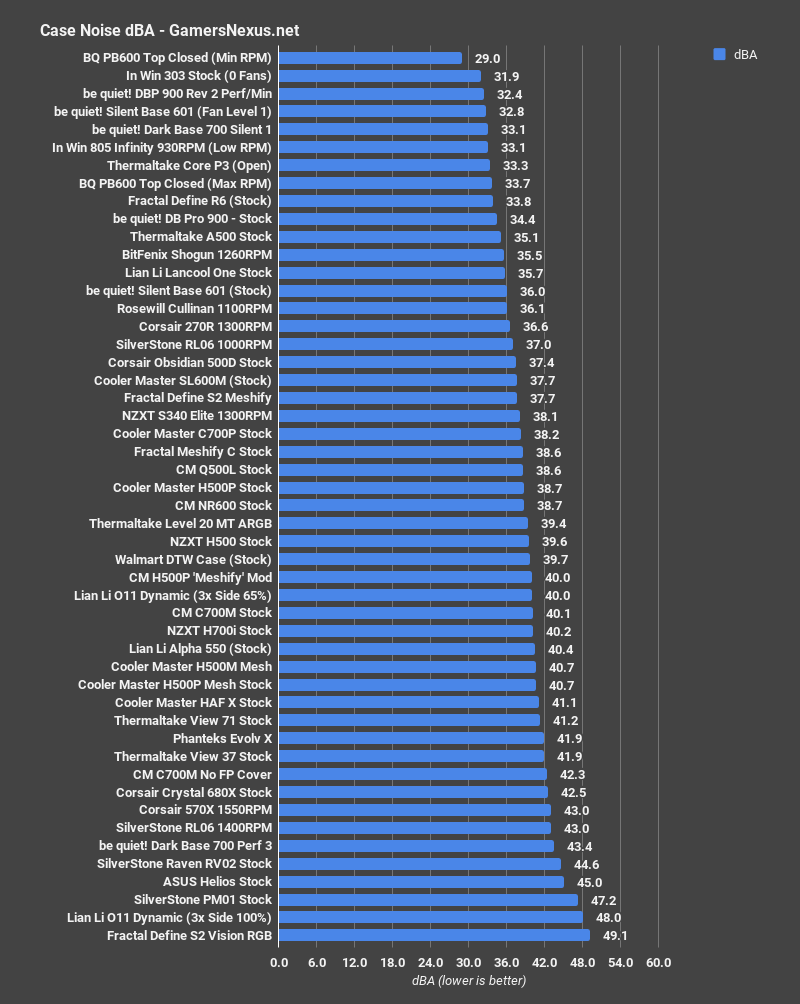 Noise levels plant the Fractal Define S2 Vision back into the realm of reality, showing that no thermal gain comes without a consequence – whether that’s a visual one or an acoustic one. The Vision ends up the loudest stock case on our chart, measuring at 49.1dBA at 20” distance, tested the same way as every other case on the chart. Perceptually, this is about 2x louder to the human ear as the H700i stock case. 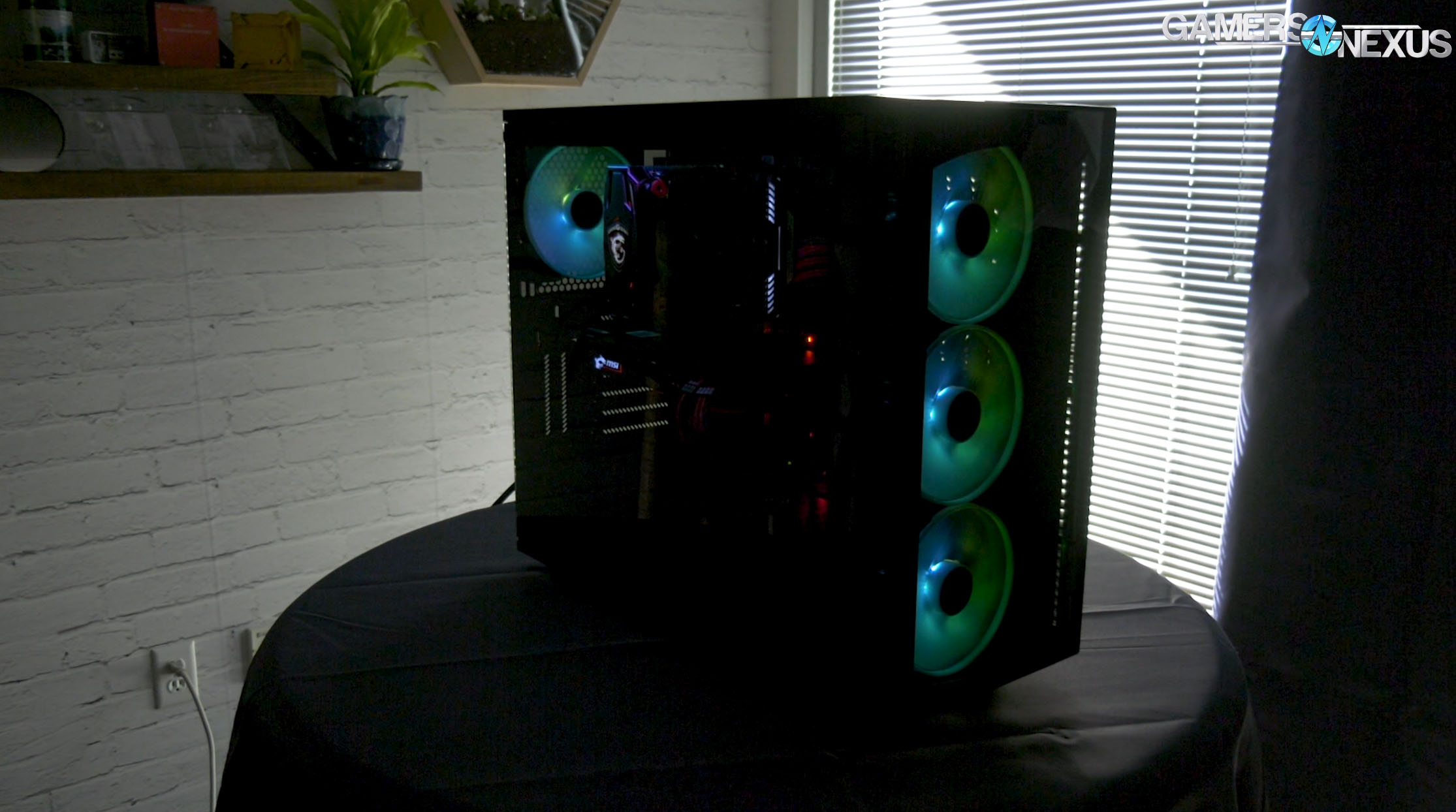 The case is able to brute force reasonable cooling performance in the worst cases, or good performance in the best (like GPU thermals in the more recent charts above). It is loud, though, and that’s the trade for brute forcing air around a glass panel with this many fans. Our concern really isn’t primarily with the cooling, though, or even the noise, but rather the lack of effort invested into something that’s billed at $240. That’s a competitive market now. The Cooler Master H500M, for instance, competes in this range, as does the C700P, the NZXT H700 is much cheaper but was once around $200 (for the i-variant), the Phanteks Evolv X is popular in this range, and plenty more that all do more unique things with less recycling of old designs.

The case isn’t bad. We like the R6 chassis as a frame, we like it in the S2 Vision RGB as well, it’s just that the $240 price is simply too much for what you’re getting. There isn’t enough new here for a $100 add, and the full ARGB LEDs and glass can be had with better additional features elsewhere, and at a similar (or lower) price.