Our test looks at these cards specifically:

The “Hybrid” cards drive price up a little higher than the average for a 970 SLI or 980 Ti single card setup. For this test, we're assuming a baseline price of $650 - $660 for a single 980 Ti (MSRP is $650, which is where most non-liquid cards fall). We're also assuming a joint price of ~$660 - $700 for two GTX 970s (non-liquid), which puts them effectively at a head-to-head price bracket. That makes the value comparison clean and easy, no waffling between price.

There are two primary scenarios where SLI or CrossFire are used: A later upgrade when half the configuration is already owned and a day-one, brand new build. In the event of the first scenario – where the user already owns one GTX 970 and is considering a second – the value considerations are different and will be discussed only in the conclusion. Also in that scenario, we'd always recommend buying that second card (if truly desired) before it exits production. Almost every time a card exits official production, prices spike on retailers and second-hand markets. It's almost always better to buy a newer, single card once that happens, as the spiked prices are hardly sane or good value.

SLI and CrossFire are also historically prone to micro-stuttering as a result of their dual-processing technique (normally AFR, or alternate frame rendering). GPUs render alternating frames when using the AFR technique; more explicitly, GPU A will render all odd frames (1, 3, 5, 7) while GPU B renders all even frames (0, 2, 4, 6). Micro-stutter can be so extreme in some games and driver sets that SLI becomes undesirable, even if average FPS is improved over single-card configurations. In these situations, disabling one of the two GPUs (but leaving the GPU physically installed) will reduce or eliminate micro-stutter, but then you're only getting half the investment outputting – certainly an unwanted situation.

Micro-sutter is observable as a result of disparate frame-time gaps, where the time between frame renders is inconsistent enough that the user can perceive a jarring difference – e.g. jumping from a 16ms render to a 30ms or 40ms render time (or worse). Adaptive synchronization technologies have helped to mitigate this phenomenon. Monitors supporting G-Sync and FreeSync are of particular importance for consideration when running SLI or CrossFire. The GPU connected to the display manages the sync technology. NVidia SLI setups fully support G-Sync. AMD CrossFire setups, as of driver version 15.7 from July 2015, also fully support FreeSync.

Another performance consideration for multi-GPU cards – in a similar vein to micro-stutter – 1% and 0.1% low frame performance can sometimes be worse than single-card setups. This is another point that could potentially favor a single, higher-end GPU, but recent optimizations made to drivers and games may reduce the impact to manageable territory – we'll look at that below.

No overclocking was applied during these tests, which does mean that the slower of the two cards (the 970 Hybrid, at 1140MHz) will marginally impact the overall performance. SLI overclocking is being done in one of our next tests and has been reserved for that content. We've already tested this 1140MHz vs. 1190MHz differential over here, if you're curious about what kind of delta that produces. We mostly saw differences centered around the 1.87% to 2.5% area.

We tested using our 2015 multi-GPU test bench. Our thanks to supporting hardware vendors for supplying some of the test components.

The latest AMD drivers (15.12) were used for testing. NVidia's 361.43 drivers were used for testing the latest games. Game settings were manually controlled for the DUT. All games were run at presets defined in their respective charts. We disable brand-supported technologies in games, like The Witcher 3's HairWorks and HBAO. All other game settings are defined in respective game benchmarks, which we publish separately from GPU reviews. Our test courses, in the event manual testing is executed, are also uploaded within that content. This allows others to replicate our results by studying our bench courses.

Each game was tested for 30 seconds in an identical scenario, then repeated three times for parity. The results in the tables are averages of these three runs.

Fallout 4 produced some of the most disappointing performance results of the year when initially tested. Support for the game and optimizations have been made in some small capacity, but it's still easily one of the most confusingly demanding titles on the current market. 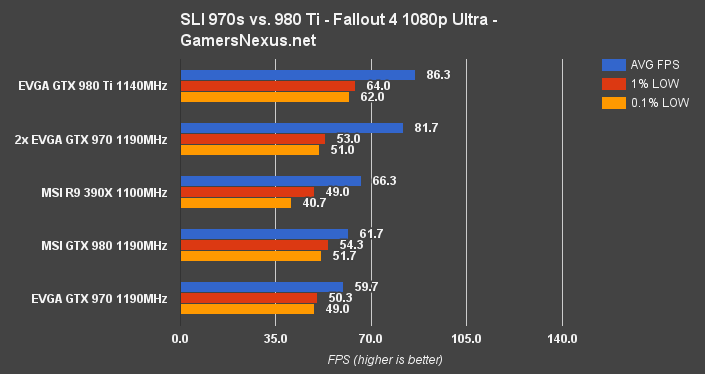 At 1080p, the 980 Ti pushes 86.3 FPS against the SLI 970 configuration's 81.7FPS, granting the single 980 Ti card a 5.48% lead. 1% and 0.1% lows are disproportionately worse to the single 980 Ti setup, but not to the level that would make SLI 'unplayable' or force the disabling of SLI. Both configurations are well within playable territory, especially considering Fallout 4's physics-FPS binding that demands a 60FPS lock.

The 390X, for reference, now performs slightly better than the GTX 970 single card, whereas initial launch had the GTX 970 ahead of the R9 390X. 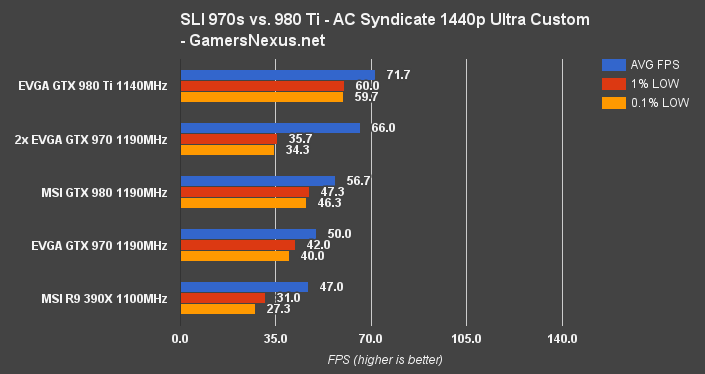 AC Syndicate once showed effectively zero SLI scaling in our tests, but has improved dramatically since original testing. In today's test, we see the 980 Ti favored by a somewhat large 17.23% over the SLI GTX 970s. That's 71.7 AVG FPS vs. 66 AVG FPS, but there's more to the story than just averages: The SLI GTX 970 setup suffered from massive reductions in 1% and 0.1% lows; worse even than the single GTX 970. We saw severe micro-stutter in Assassin's Creed Syndicate that showed a halving of the average framerate at its worst times. This coupled with the 17.23% lead makes the GTX 980 Ti a clear and definitive winner. Even the GTX 980, which outputs about 10FPS (15.16%) slower gameplay has significantly more fluid performance than the dual 970 setup, and would be a worthy consideration.

Looking only at scaling, the GTX 970 dual-card group produces a 33.63% performance gain over a single GTX 970. Considering day-one performance for SLI was nearly identical to running just one card of the config, that's not a bad driver improvement. Metro: Last Light shows a 4.78% performance lead for the GTX 980 Ti at 1080p, now marking three points in favor of the 980 Ti. Interestingly, a resolution jump to 1440p produces effectively identical performance (AVG FPS) between the two setups, with the 980 Ti leading by way of 1% and 0.1% lows (but only by a few points, to the degree that an end user wouldn't be able to differentiate performance). At 4K, the 980 Ti retains a 1.76% lead and outputs observably identical lows to the 970s in SLI.

This is our first scaling measurement with all three major resolutions covered. There's a clear progression from 1080p to 4K in performance gains, resultant of additional pixel processing power generated from running two GPUs. At 1080p, 2x 970s scale 26.26% over a single 970 (sub-optimal, for sure); that scaling changes to 38.93% at 1440p and 43.20% at 4K. 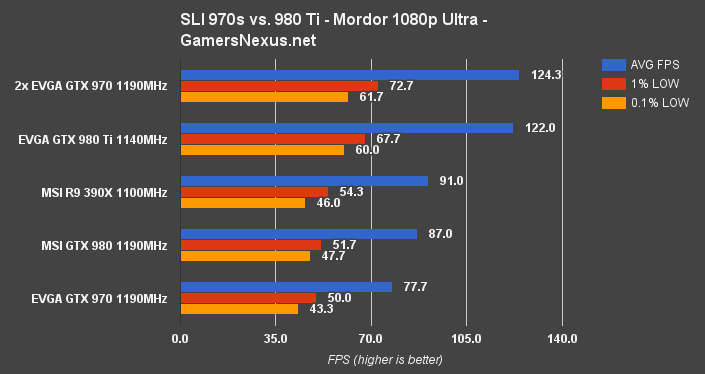 Shadow of Mordor finally shows a performance lead for the two GTX 970s, which run a marginal 1.87% better than the single GTX 980 Ti – not necessarily “worth it” considering the previous wins for the single card, but this may be a turning point for the dual-card setup. We'll re-evaluate once all results are in. At 1440p, a 6.14% lead emerges for the 2x 970s, though the 980 Ti retains better 0.1% lows (outside of observable impact to the end-user, granted). 4K shows a 9.88% lead – more linear scaling for the dual processors. Two GTX 970s are the objective winner here, though the margin is small enough that value remains suspect until further testing – below – is evaluated. 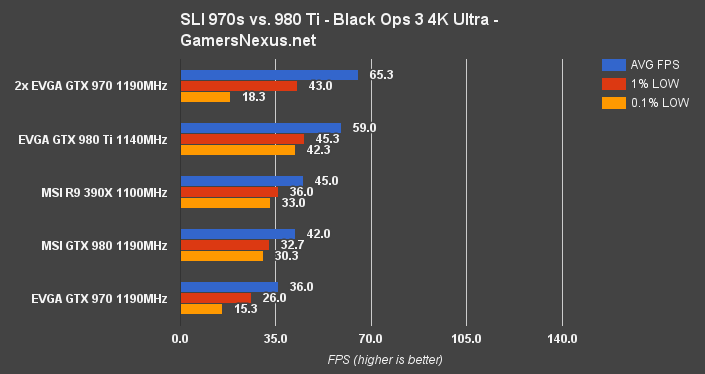 Call of Duty: Black Ops III has remained one of the best-performing titles relative to its 'looks' that we've worked with this year. See our graphics optimization guide for the game over here. This is the title that most closely puts us in operable range for 144Hz displays.

As for a single card versus two cards, the dual-card setup presents a massive 56% average FPS gain at 1440 and 57.89% gain at 4K. 1% and 0.1% lows aren't very good for the SLI setup when looked at relative to the 980 Ti (AVG vs. low gap is larger), but still well within the playable range. 0.1% lows on 4K are dismal and render the game unplayable at a competitive level. 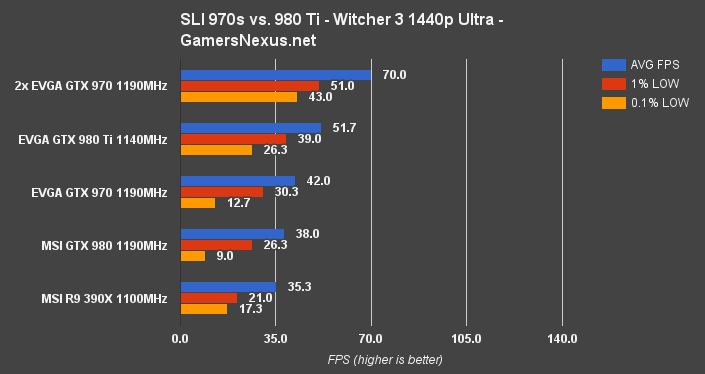 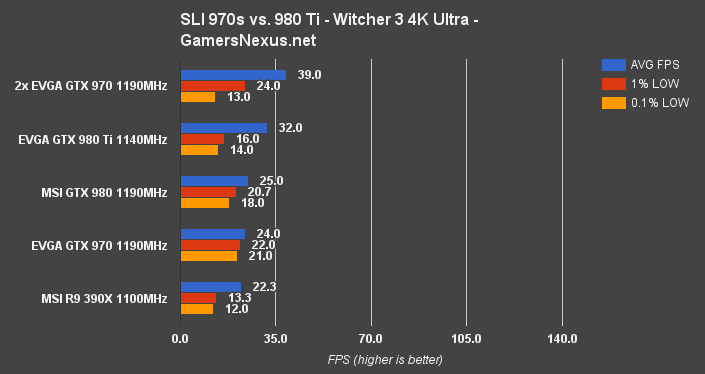 Note: There was an averaging error (spreadsheet formula pointed at the wrong cell for one of our lineups) in the 4K Witcher 3 test when the video was rendered. That error has been resolved in the above chart. The original chart showed 23FPS for the GTX 980 (AVG) and 24FPS for the GTX 970 (AVG), but the correct numbers are 25FPS (980) and 24FPS (970). Thanks to the viewer who spotted this!

The Witcher 3 produces the biggest advantage for SLI, with the 2x 970s running 30.07% faster than the GTX 980 Ti at 1440p. That and the general low FPS improvement over the 980 Ti makes The Witcher 3 significantly more playable on the 2x 970s at this resolution. 4K is pretty rough across the board, but the dual cards do retain a technical lead (19.7%), despite neither configuration being what we'd consider 'playable' at Ultra. We're now at four points for SLI GTX 970s and three points for a single GTX 980 Ti, looking firmly at the head-to-head in average FPS metrics. There's obviously a lot more in the details, all written in the above test notes. 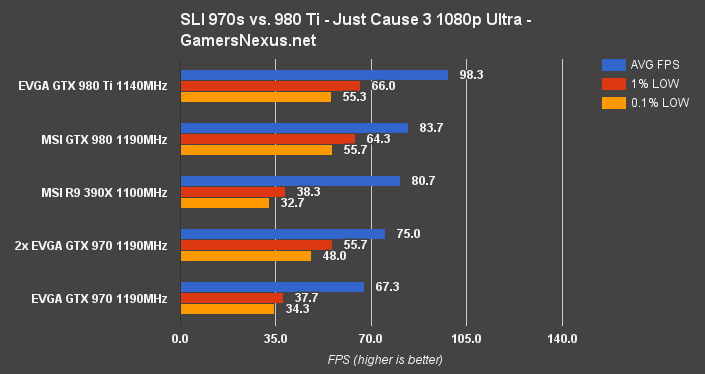 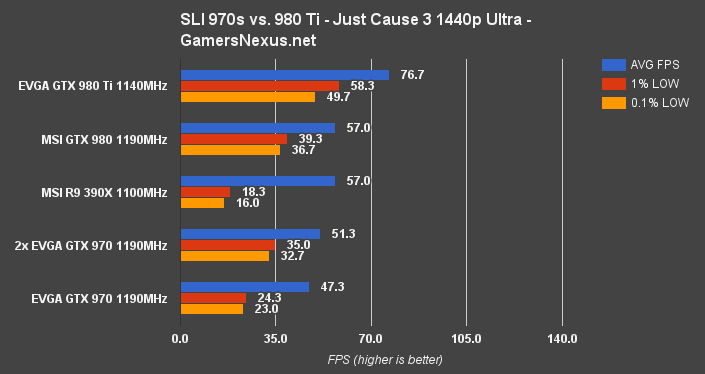 This was already discussed in all the above sections, but here's a table strictly showing SLI performance scaling from one card to two:

Conclusion: Is SLI Worth it for the GTX 970? 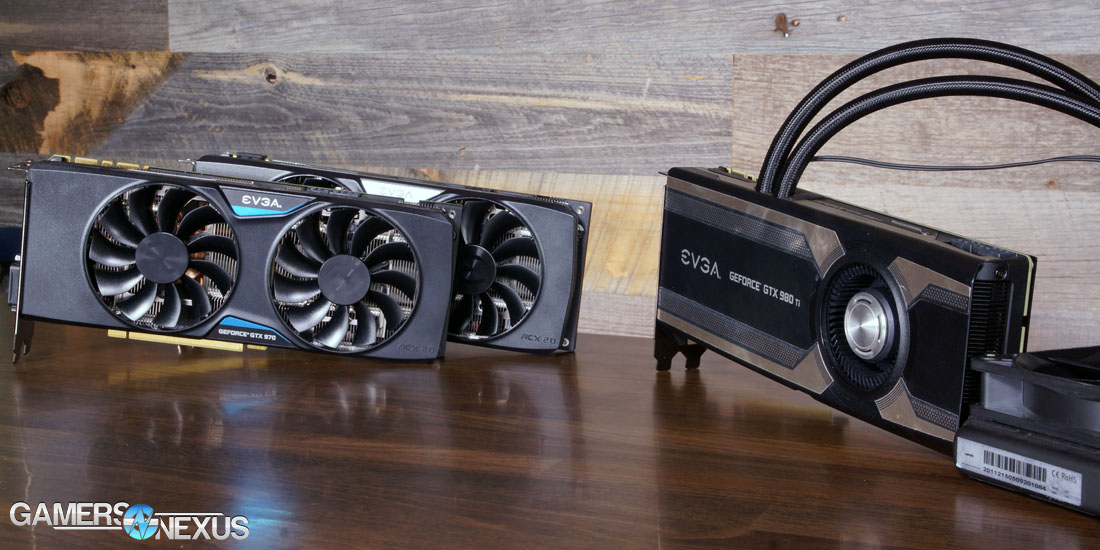 The value of SLI depends on the situation. Assuming a completely new system build, the only time SLI 970s holds a considerable lead over the single 980 Ti is in The Witcher 3 and Black Ops 3 (at 1440). For every other title, either the 980 Ti leads (MLL, FO4, ACS, JC3) or the 2x970 lead is so small that it isn't worth the issues with other current and future releases. Micro-stutter remains a concern in some games, but isn't nearly as bad as it has been in the past. For these reasons, we'd generally feel most comfortable recommending a single GTX 980 Ti over the dual-GTX 970 setup (AMD also has offerings, of course, but we're keeping this content strictly focused on the original question; we also don't have the Fury X).

If already in possession of one GTX 970, an upgrade isn't nearly as bad of a value – that's a ~$330 spend to scale performance upwards of 60% in some games, or an average of 30.54% across 1080p tests (five titles). SLI scaling as a whole has improved tremendously over the years, and much more reliably becomes a viable solution as a game's optimization matures. That doesn't necessarily make it a better option than a single card for a new build, but does mean SLI is a less headache-inducing upgrade pathway than it once was. Still not perfectly reliable – ACS was useless with SLI at launch, Just Cause 3 still is – but better.