Smart device: there isn’t one on the H500, at least not preinstalled. There is on the H500i, but that’s not the version we’re reviewing--the important thing is that customers now have a choice of whether to pay extra for the smart device or not. We originally pegged the H700i as a successor to the S340, but NZXT envisions it as an H440 replacement, and instead the H500 is intended to take the S340’s place. Stripping out the smart device and lowering the MSRP to $70 does bring it much closer to what we liked about the older case.

Cable bar: we mentioned that the cable bar in the H700i was artistically bent in such a way that there wasn’t a good place to route thick power cables, and that we preferred the old S340 style. That old style has returned in the H500, and there are even little cable tie points built into it, which is something we’ve requested in other case reviews. The bar is also fully removable on the H500.

Panel fasteners: The H700i used four basic thumbscrews to hold its glass panel on, which is extremely common but didn’t really live up to the level of design we saw elsewhere in the case. In contrast, the H500 uses a half-panel design that’s so simple and functional we’re surprised we haven’t seen it in previous reviews. The bottom edge of the glass is held behind the upper edge of the PSU shroud, and the top edge has two plastic knobs that snap into the chassis and a single thumbscrew for security. NZXT saves money by minimizing the amount of tempered glass used, while the customer gets extra width inside the PSU shroud without losing any window space. Unfortunately the quick-release steel side panel on the H700i isn’t a feature of the H500, but the two captive thumbscrews used instead are perfectly serviceable. Since they can’t be completely unscrewed the panel stuck a bit at first, but it hasn’t been an issue since and it hinges out and off with no problems.

Those are really the only negative points of our H700i review, although the smart device alone took up half the article.

Space for cable management is fairly narrow (19-23mm according to the spec sheet) and tightly regulated by plastic channels with built-in velcro ties. The channels can be removed for extra room, but between the velcro and cable tie points it should be possible to strap everything down tightly enough to make this unnecessary. Some neatness is required: the side panel won’t do all the work of mashing down big tangles of cables. The H500 is missing the tiny plastic “designated cable router” puck found in the H700i (RIP).

We’re happy to see removable fan cages becoming increasingly common, as it makes testing different fan configurations far more convenient. The front fan cage can hold two 140mm or 120mm fans--if smaller fans are used, they go towards the bottom of the case. We’ll save discussing whether or not using these slots is a good idea for the thermal section.

All intakes are filtered and all filters are removable, which is important with a stock negative pressure setup. The top filter is just a square of mesh stuck between the fan and the case (which is fine), but the filters along the sides of the front panel and under the PSU clip in and have nice plastic frames. The filters at the bottom and side of the front panel are especially nice, with mesh sandwiched between two layers of plastic rather than just glued on top. The’re also comically tiny and narrow, but it’s nice to see such attention to detail--many manufacturers wouldn’t have bothered putting anything there at all. All filters can be removed without altering the case’s appearance.

We liked the perforated PSU shroud with tool-less 2.5” sleds in the H700i, and it’s just as good in the H500. Unlike past NZXT cases, there’s no space for an SSD between the glass window and PSU shroud (since the shroud is actually the exterior of the case), but counting the HDD cage there’s still plenty of drive support. The top of the shroud has conveniently large cutouts for I/O connectors and PCIe power cables.

Screws, including thumbscrews, were incredibly tight. This is normal for NZXT cases--have a screwdriver ready.

Airflow is something we haven’t mentioned so far. The H500 is the blankest, cube-iest of all minimalist blank cube designs, surpassed only by the S340 Elite. The H500 at least has a strip of filtered ventilation along the front edge of the steel side panel, as well as the top fan mount and the usual hole underneath the front panel. NZXT assured us that, despite appearances, thermal performance wouldn’t suck and that we should keep an open mind.

The stock fan configuration is two 120mm exhaust fans, one behind and above our CPU cooler and one directly behind it. The 100% negative pressure setup and the lack of any fans pointing towards the GPU was intriguingly strange. We did three standalone tests not in the stock configuration: no top filter (unnecessary for exhaust), additional 140mm intake fan, and both 120mm fans moved to the front intake slots.

Starting with torture tests and the NZXT H500-only data, average CPU temperature was 61 degrees Celsius over ambient in the torture test and with the stock fan configuration. Again, as a reminder, that’s dual-exhaust. Removing the unnecessary top filter lowered that to 57.3 degrees. It’s a good thing NZXT included the filter so that it could be used in top intake configurations, but if the stock (exhaust) fan layout is used it should definitely be removed. We left the filter in place for all other tests since that’s how the case ships. Adding a 140mm intake fan to the uppermost of the front mounts lowered CPU temperature barely more than removing the filter did, down to 56.5C, while moving both 120mm fans to the front intake slots was equivalent to removing the filter at 57.2 degrees. Exhaust-only may not be the best stock configuration, but it does leave more room for CLC options in the front. 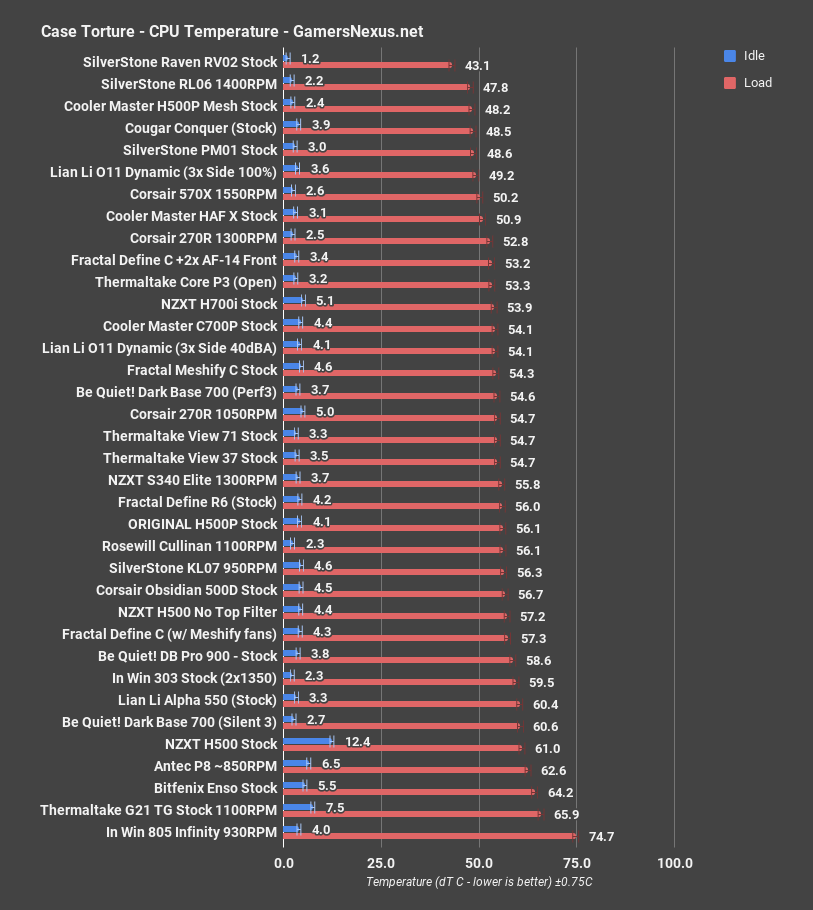 The stock 61C dT measurement is pretty warm, especially for a case that has two fans directly next to the CPU cooler. 57.3C dT is perhaps the fairer number to compare, since we do recommend removing the top filter. That’s acceptable, but still not great: the H700i managed 53.9dT, and even the S340 Elite beat it out at 55.8dT. There’s no fan pushing cool air directly into the CPU cooler, so the air being pulled towards it has already been warmed somewhat by the GPU.

Average GPU temperature in the torture test was 52.4 degrees Celsius with the stock fan configuration, and 53C with the top filter removed, a minor change within margin of error. Interestingly, temperature went up quite a bit with the 140mm intake fan added, up to 59.3C and 58.9C with the 120mm fans moved to front intake. This is where the the stock fan configuration starts to make sense. NZXT chose negative pressure because this allows the GPU to draw air in through empty expansion slots, rather than relying on intake from the mostly-sealed front of the case. When front intake fans are added, even ones pointing towards the GPU, this airflow pattern is disrupted and the GPU can no longer pull cool air in from behind the case. 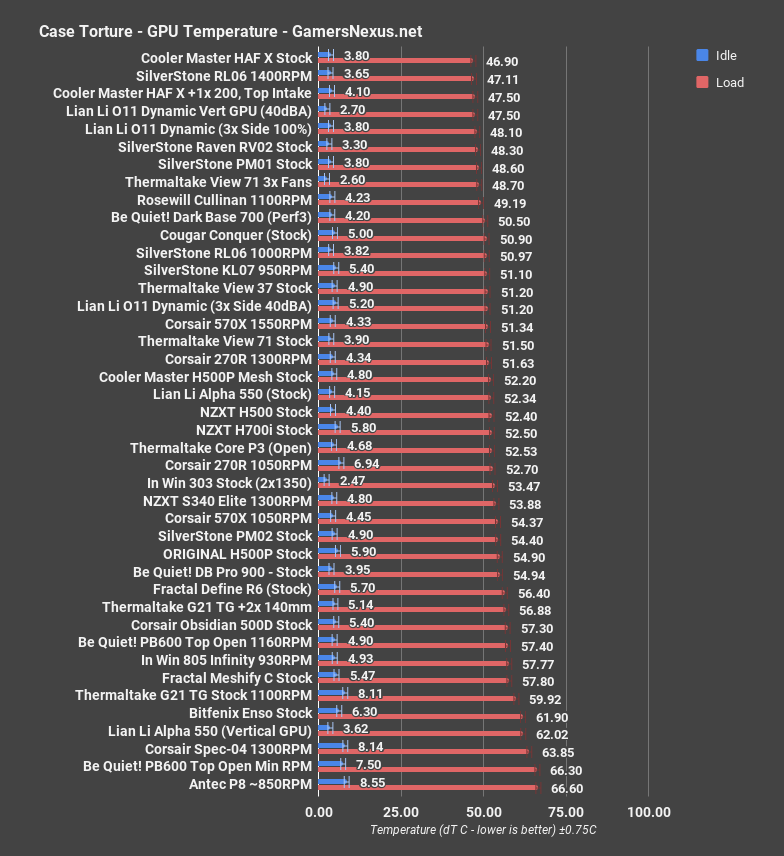 The H500’s stock GPU temperature doesn’t break any records, but it is more competitive than the CPU temperature manages. 52.4C is equivalent to the H700i, which has twice as many fans, and the Thermaltake Core P3, which is open-air but has no intake fans. It’s also placed right next to the H500P Mesh, which is good news for NZXT and bad news for the readability of our charts. We praised the H500P Mesh heavily in our review of the case, and the H500 manages to achieve similar GPU performance with more tuned design approach -- though CPU performance is a different story and a bit warmer. The S340 Elite averaged 53.9C dT, so the H500 beats its predecessor in at least one thermal category. 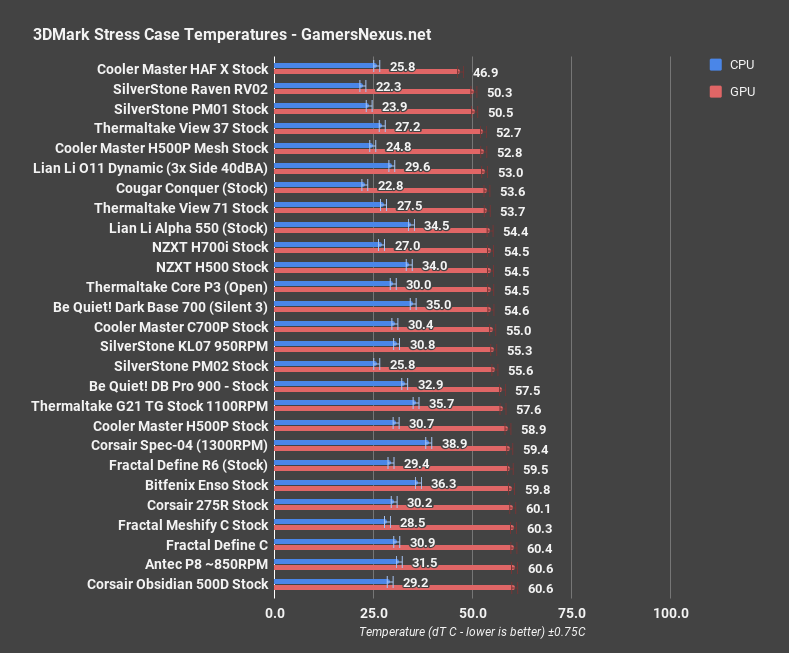 3DMark is next, and acts as a gaming stand-in. The GPU operates at 54.5 degrees over ambient, and is again equivalent to the H700i and Thermaltake open-air Core P3, but we don’t have the S340 Elite on this chart for comparison. The CPU isn’t stressed in this test and we typically don’t point out its temperature, but it’s worth noting that the CPU delta was several degrees lower in the H700i during this test (27C vs 34C). Again, the exhaust fans are pulling hot air up through the CPU cooler and out of the case, so it’s dealing with radiative heat from the backplate of the GPU in addition to other component heat. For a $70 case that’s not advertising itself as a big airflow competitor, the H500 does well overall. 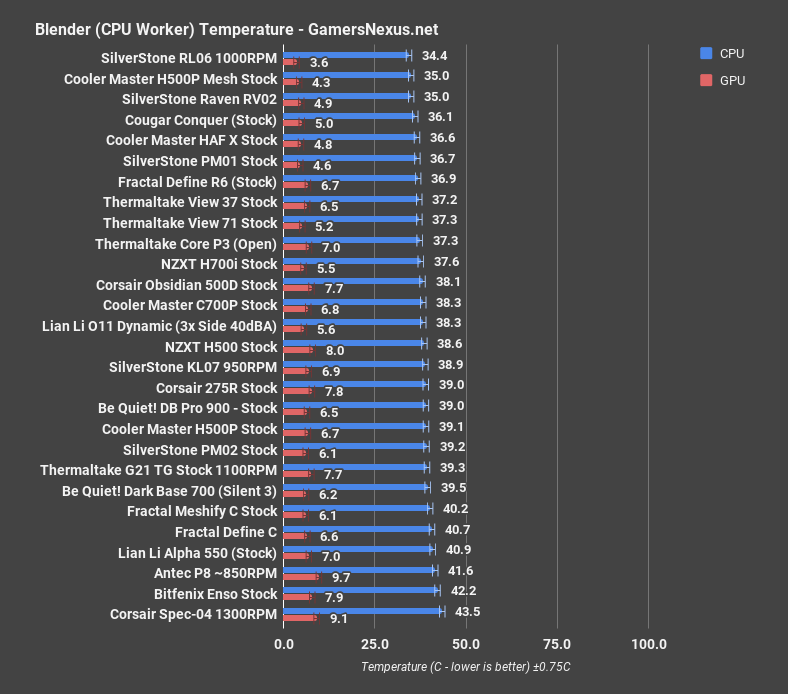 Running Blender with CPU rendering, we measured an average dT to 38.6 degrees Celsius, between the Cooler Master C700P and the extremely forgettable Silverstone KL07. Differences in this test are fairly subtle, so smaller differences become more exaggerated and significant.

Average GPU temperature during GPU rendering was 26.7C. This is also a degree higher than the H700i for once, closer to the Lian Li Alpha 550. 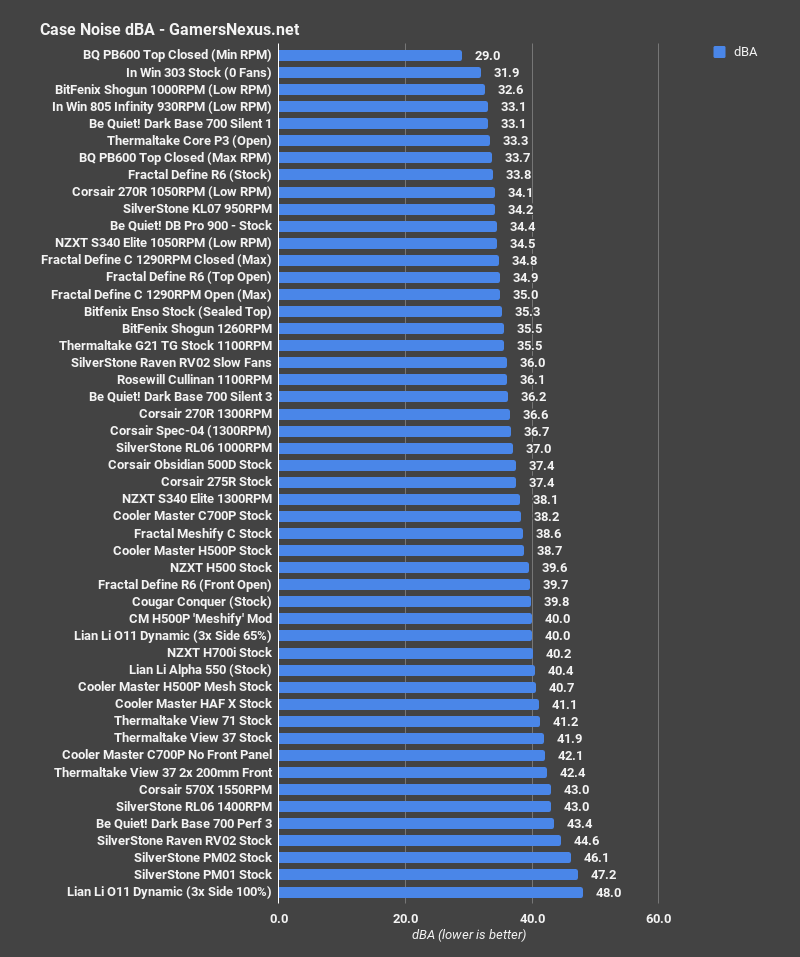 Two 120mm NZXT fans running at 1300-1400 RPM make the H500 a bit noisier than average at 39.6dBA, audibly equivalent to more open cases like the Meshify C and the Cougar Conquer. There was initially some buzzing from the top fan as it vibrated against the case, but it was tightened down fully for noise testing. Running the fans at a normal speed should keep the case fairly quiet since the front is sealed and the fans are all at the back. 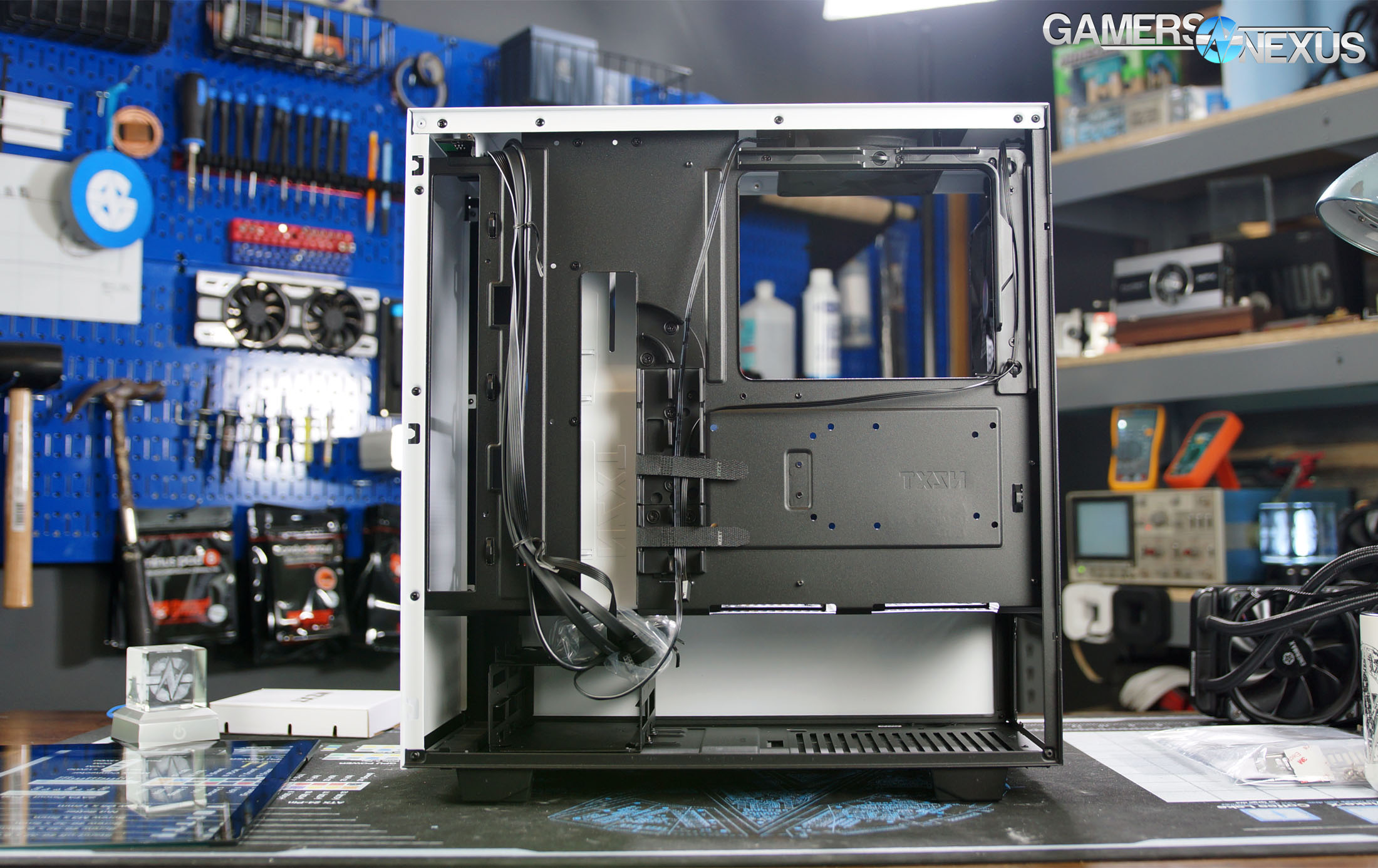 Like a certain other H500, we have to give NZXT credit for paying attention to earlier criticism and responding to it effectively. There is a version of the H500 with a smart device and RGB strips, but making this less-expensive “dumb” version available as well directly solves the main problem we had with the H700i.

The S340 and S340 Elite were never the best-cooled cases; we liked them because they were well-priced, well-built, and looked good. The H500 is a worthy successor to all those things, including the middle-of-the-road cooling performance: it’s fine, acceptable but not exceptional. GPU cooling is the highest priority for maintaining performance, and despite appearances, the H500’s stock fan configuration doesn’t suffocate the GPU. Anyone really worried about thermals shouldn’t be shopping for sheer-fronted cases anyway; consider a Fractal Meshify with some extra fans instead (review here).

Like the 275R and the PM02, the previous generation of cases is also the H500’s closest competition. The H500 costs $70, which is MSRP for the regular S340--but a regular S340 has an acrylic window, not tempered glass. The glass-sided S340 Elite is more expensive, usually between $90-$100. $70 is an extremely reasonable price to ask for a case of this quality, especially for anyone who wants tempered glass. This is a successor that compares favorably to the older versions.